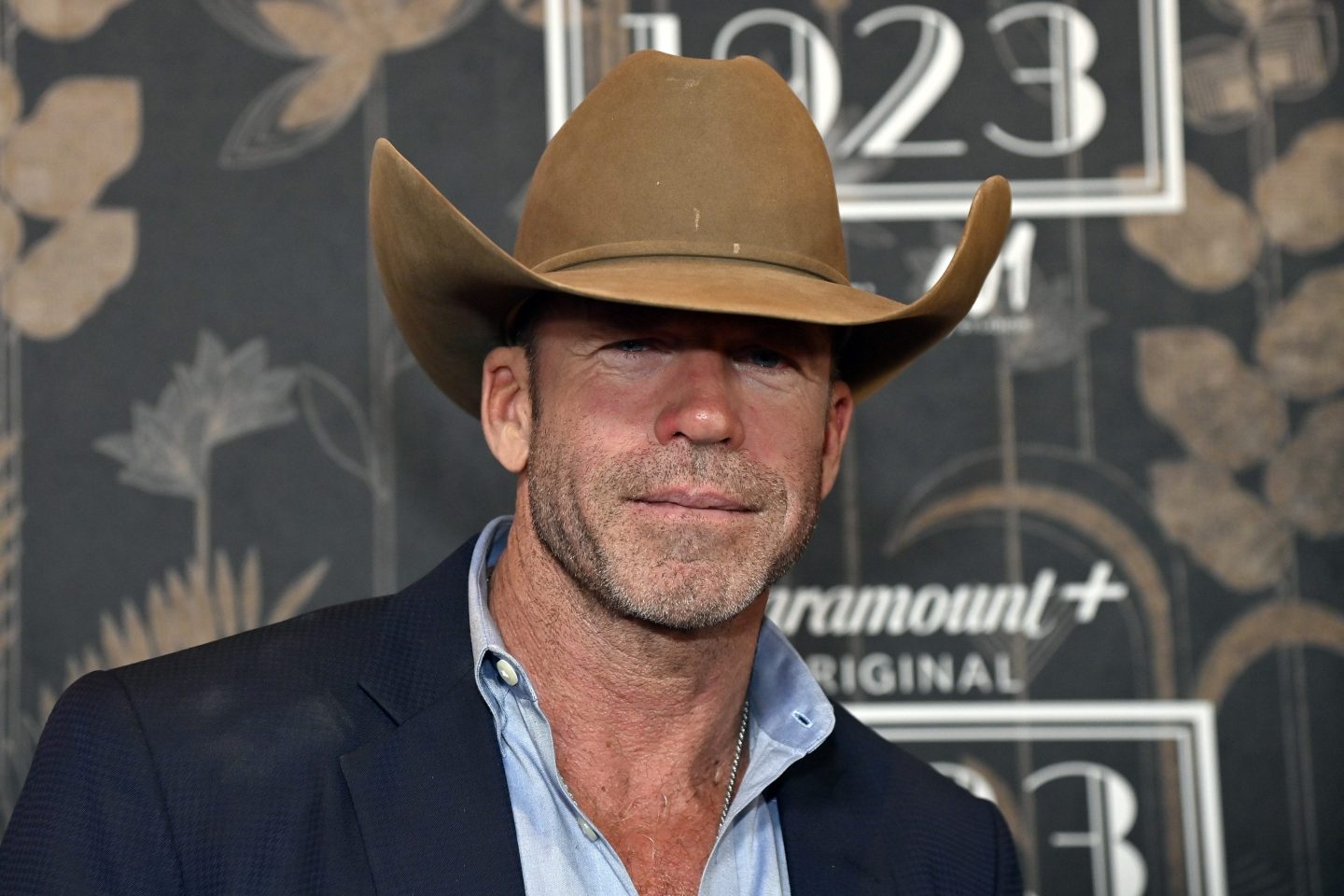 Like a lone cowboy riding his horse into the sunset, it seems as if Taylor Sheridan is living his dream. The creator and writer of the biggest show on TV, Yellowstone, which is something like a red-state Succession in how it follows the power struggles of a wealthy ranch-owning family in Montana, has become Hollywood’s small-screen Western auteur. Yellowstone’s huge success has created a boomtime for boomer icons, with Sylvester Stallone, Helen Mirren, and Harrison Ford all signing up to work with Sheridan on other shows.

The cable network series has become so popular—the premiere episode of the most recent season garnered 12.1 million viewers—that it has spawned two spinoffs (flashbacks, as their titles indicate: 1883 and 1923) as well as wholly unconnected shows that serve as star vehicles for other movie stars drawn to TV. They’re part of a nearly $200 million deal ViacomCBS, now known as Paramount, made with Sheridan to produce more shows over the next couple of years. His series of franchises dominate the most-watched list across both broadcast and streaming shows, but it wasn’t long ago that Sheridan was making his home on the range—literally.

Unless you were a Veronica Mars or Sons of Anarchy fan, Sheridan was relatively unheard of until he started writing his own scripts. His pathway was less conventional than most, and like the stoic Dutton family that he has now depicted across multiple generations, it required a lot of grit.

He attributes his success in part to simply not giving up, a “stubbornness,” and a “refusal to fail” in an interview with CBS News. Sheridan says there’s one thing to take from his story: It’s really never too late to give up on a breakthrough.

Living in a car and a tent

Sheridan has humble beginnings—at least, compared to the entertainment industry’s so-called nepo babies. He experienced a “difficult childhood” growing up outside of Waco, Texas, The Atlantic’s Sridhar Pappu reported, where his family had a ranch they went to on the weekends.

His mother lost the ranch post-divorce after overleveraging it, which would later provide inspiration for Sheridan’s work. Sheridan describes how living at the ranch taught him what it was like to be a cowboy and how he didn’t take too kindly to the loss of his dream; as his mom said to Texas Highways, a monthly magazine by the Texas Department of Transportation, Taylor didn’t speak to her for a year after the ranch was sold.

“When you write, it’s always of an autobiographical nature,” he told Texas Highways. “Our family ranch has informed Yellowstone in many ways, but losing it was the biggest one.”

Sheridan enrolled in Texas State University, but later dropped out and spent his days “mowing lawns and painting houses and trying to figure out what to do,” he told local newspaper Austin American-Statesman.

After a talent scout discovered him at a mall, Sheridan began landing acting gigs on shows such as CSI and NYPD Blue. He eventually ended up in Los Angeles, much to his chagrin. He lived with his dog in his car while trying to make ends meet, Pappu wrote.

“I was really broke but made the choice not to quit and go home,” Sheridan told the Austin American-Statesman. “I also stayed with friends on a reservation north of L.A. They would let me go up there, and I would pitch a tent.”

Sheridan’s first break was on the cusp of his 40s

On the cusp of his forties, Sheridan finally got a break playing David Hale in Sons of Anarchy. But just as he was making it, Sheridan took a step back. He and his pregnant wife Nicole, whom he met while teaching acting classes, moved to Wyoming. He told the Austin American-Statesman that he left acting because didn’t want to raise his child in L.A. or be busy auditioning for commercials.

But Sheridan wasn’t done trying to sell and write stories, even though he was still scraping by: Nicole maxed out her credit card so that he could afford Final Draft, the software program for writing scripts, Pappu reported. It paid off eventually, as Sheridan wrote scripts for critically acclaimed movies Sicario and Hell or High Water. Both were so successful that they enabled him to buy a new ranch.

As Sheridan churned out more neo-Westerns, he worked on Yellowstone on the side. But it would take some time before the show was greenlit, as Sheridan wanted a fair amount of artistic control, insisting in his pitch meeting that he would be the sole writer and director of his series. After sitting  on the sidelines for a bit as HBO in 2017, Yellowstone was revived by Paramount in 2018, picking up steam during the pandemic.

Sheridan now lives on a ranch in his home state of Texas, building out his epic western dramas as well as other TV shows outside the Wild West, set to star more Hollywood A-listers such as Nicole Kidman.

But at the end of the day, Sheridan would rather be a real cowboy than write about them.  As he told local publication Fort Worth about the joys of riding a horse, “There’s nothing I’d rather do.” For now, holding the reins on a multimillion-dollar empire might just have to do.