A California startup is turning greenhouse gas into a biodegradable plastic alternative that’s being used by Shake Shack, Nike, and H&M 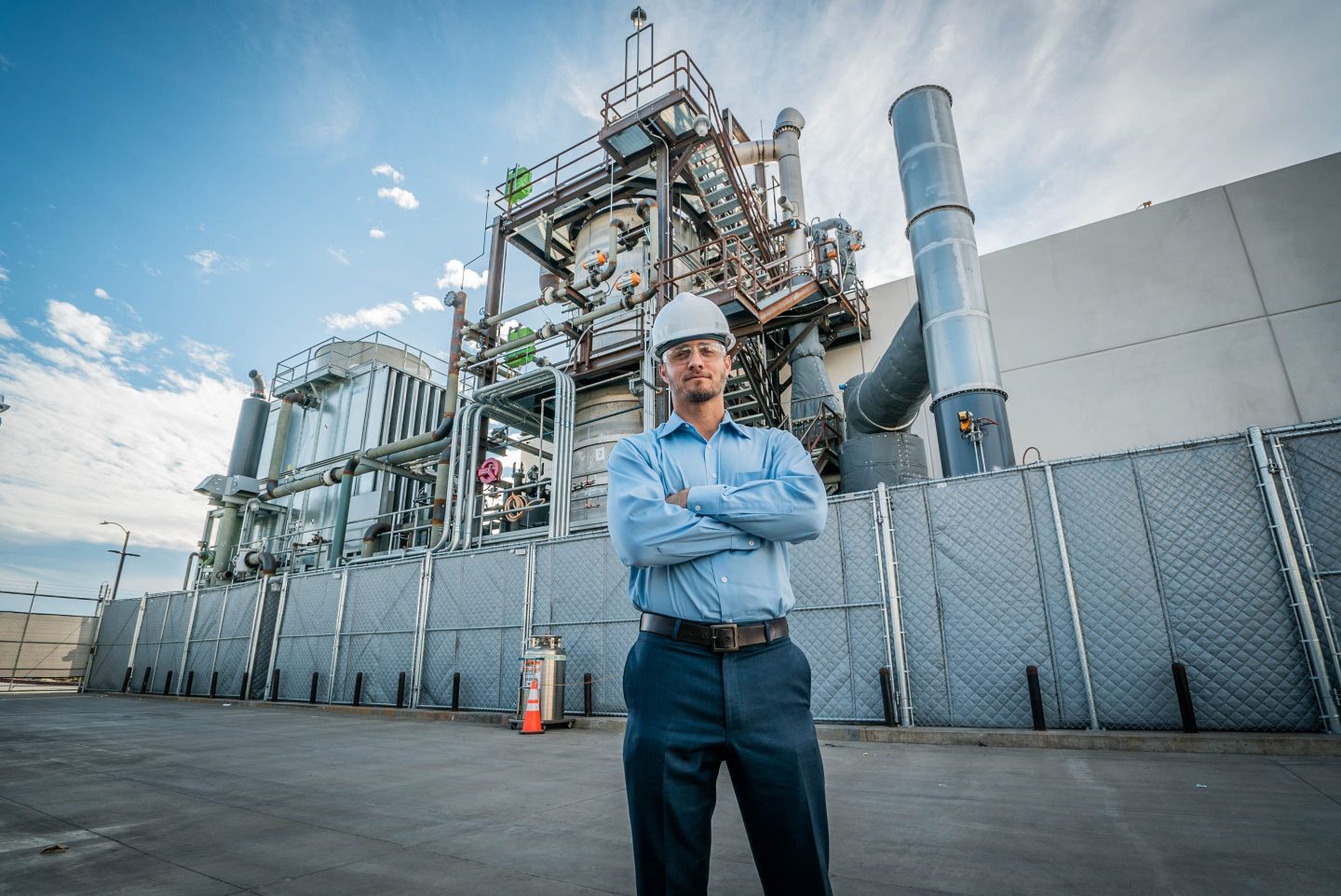 The decades-long fight against climate change has taught us that greenhouse gases—the product of burning fossil fuels—are to be captured, taxed, or cut altogether. But 20 years ago, entrepreneurs Mark Herrema and Kenton Kimmel thought of carbon differently—as a possible ingredient in products we use every day.

Now, their Huntington Beach, Calif., firm Newlight Technologies is converting greenhouse gas into a biodegradable replacement for plastic through a process that piggybacks on the one microbes use to eat methane leaking from the ocean floor (and consume oil spills such as the Deepwater Horizon). The company’s meltable bioplastic, called AirCarbon, has been used to make over 50 million products, including Shake Shack straws and cutlery as well as sunglasses and wallets, and soon will be found in Nike and Sumitomo products. Newlight, which has raised more than $106 million, in July signed a 15-year deal to open a new commercial AirCarbon reactor in Ohio that will allow it to churn out hundreds of millions more products.

Meltable AirCarbon Pellets can be formed into all sorts of objects.
Courtesy Newlight Technologies

“If you can use greenhouse gas as a resource to make useful products then you can create a market-driven, consumer-driven solution to this challenge,” Herrema says. “The potential scalability of that concept, where we’re not talking about subsidization or taxation, but in fact just commercial manufacturing, was immensely compelling to us.”

The idea was compelling but not easy to execute.

The building blocks for Newlight—methanotrophs, the methane-eating microbes that metabolize gas into PHB, a compostable and biodegradable bioplastic—were discovered nearly a century ago. But commercial scale methane-to-plastic manufacturing didn’t yet exist because the process was significantly more expensive than turning oil into traditional plastics.

To cut down on costs, Herrema and Kimmel spent several years hunting California‘s coasts and estuaries for a naturally occurring methanotroph that carried out the methane metabolization process at high yields.

“Those were long years trying to trying to get this thing off the ground,” says Herrema, 40.

Even finally after finding the right microbes, now known as “Biocatalyst 9X,” Newlight continued to operate in radio silence—it didn’t even have a website for the first nine years—as Herrema and Kimmel refined the extraction, purification and manufacturing process.

It was only in August 2013 that Newlight started operations at the first small commercial-scale AirCarbon reactor, where it extracts bioplastic from methane captured from dairy farms to manufacture products on a contract basis.

“It took us about 10 years to figure out the technology to basically replicate what was happening in the ocean, do it on land, do it at scale,” Herrema says.

You can think of Newlight’s basic process as something like winemaking. Instead of yeast converting sugar into alcohol, the microorganisms in Newlight’s mix covert air and methane (or CO2 and hydrogen) into carbon-storing PHB. They do so by creating a “slice of the ocean,” Herrema says. A tank known as a conversion reactor—which looks like a giant steel wine tank prodded with tubes—is filled with saltwater. The microbial biocatalyst is added, and air and methane (or CO2 and hydrogen) are pumped in.

Newlight’s microbes strip the oxygen out of the air and the carbon and hydrogen out of the methane and combine them into PHB molecules inside of the microbes’ cells, kind of like microbial muscle. After PHB is extracted, purified, processed and turned into pellets of AirCarbon, it is ready to be melted into the everyday objects traditional synthetic plastics are used for—from forks to eyeglass frames.

Once Newlight started contract manufacturing at its first plant, it explored using AirCarbon on a lengthy list of products. AirCarbon was turned into Dell shipping bags, Virgin cellphone cases, and KI chairs. By 2015, it was working with more than 60 Fortune 500 companies on AirCarbon projects. When Herrema and I spoke, he listed the AirCarbon products in his daily life, from his wallet (made from a synthetic AirCarbon leather) to his sunglass frames to the bioplastic silverware he uses at meals.

Newlight later opened Eagle 3, its first fully-integrated commercial scale plant at the company’s facility in Huntington Beach, Calif., which started delivering products in early 2021. With larger but still limited capacity, the company decided to focus on three heavy carbon-emitting industries—food ware, fashion and automotives—and work with with a range of Fortune 500 and Global 500 companies including Sysco, Disney, US Foods, Nike, Sumitomo, H&M, and others.

Most recently, Newlight announced a deal with CNX Resources Corporation. The natural gas company, based in Pittsburgh, will invest in Newlight and provide rights to methane emissions captured at a Virginia coal mine, which Newlight will use at a second commercial AirCarbon facility (Eagle 4) in Hannibal, Ohio.

Rystad Energy estimates that by 2050 the world will need to use carbon capture, utilization, and storage (CCUS) technology to remove 8 gigatons of carbon a year, says Rystad Energy’s head of CCUS research, Yvonne Lam. There’s a long way to go. Facilities using CCUS technology currently capture some 45 megatons of CO2 annually—that’s 0.045 gigatons—according to the International Energy Agency (IEA). Projects in development are supposed to raise that figure to 220 megatons a year by 2030. Not surprisingly, the IEA says the necessary rollout of CCUS is “not on track.”

“I think like the partnership between CNX and Newlight is an example of how to make sure all 500 mines have a capture system in place, and prevent this gas from going into the atmosphere,” Srivastava says.

Because AirCarbon products are made using renewable energy and greenhouse gas and sequester
or destroy more greenhouse gasses than they release, they are certified carbon negative by SCS Global Services and Carbon Trust, which measure carbon footprints. But using greenhouse gasses as a raw material instead of sequestering them deep below the earth as carbon goop is not without controversy. Once products created from greenhouse gases are composted or otherwise broken down, they again become greenhouses gases. That’s a big reason why the IEA’s 2030 Net Zero Scenario calls for 95% of captured CO2 to be geologically stored, and only 5% to be used.

“If it’s composted or decomposes, then the end fate of the CO2 is to make it back into the air and you’re just reducing the demand for raw material to produce those kinds of materials,” says Lam.

But Arizona State University professor Klaus Lackner, a pioneer in the carbon sequestration field, says using greenhouse gasses as raw materials has an important role to play now. Until we have better, cheaper technology to lock carbon underground, using consumer goods to temporary sequester the emissions is a good option, he says.

“If I can put [the carbon] away for 50 years now and say I’ll have to put it away a second time, and that time I’ll do it permanently, that may be a much better approach than waiting for people to be able to do permanent sequestration at the necessary scale right away,” he says. “I think these biological options are actually exceedingly useful. We just shouldn’t kid ourselves that they are permanent.”

For Herrema, the market-driven purist who has called AirCarbon “one part Atlas Shrugged and one part An Inconvenient Truth, this deal is one worth making. “I think taxing carbon and burying carbon certainly have their roles,” he says. “But we think a market-driven pathway to turning greenhouse gas into a resource to make things gives you really important scalability advantages.”