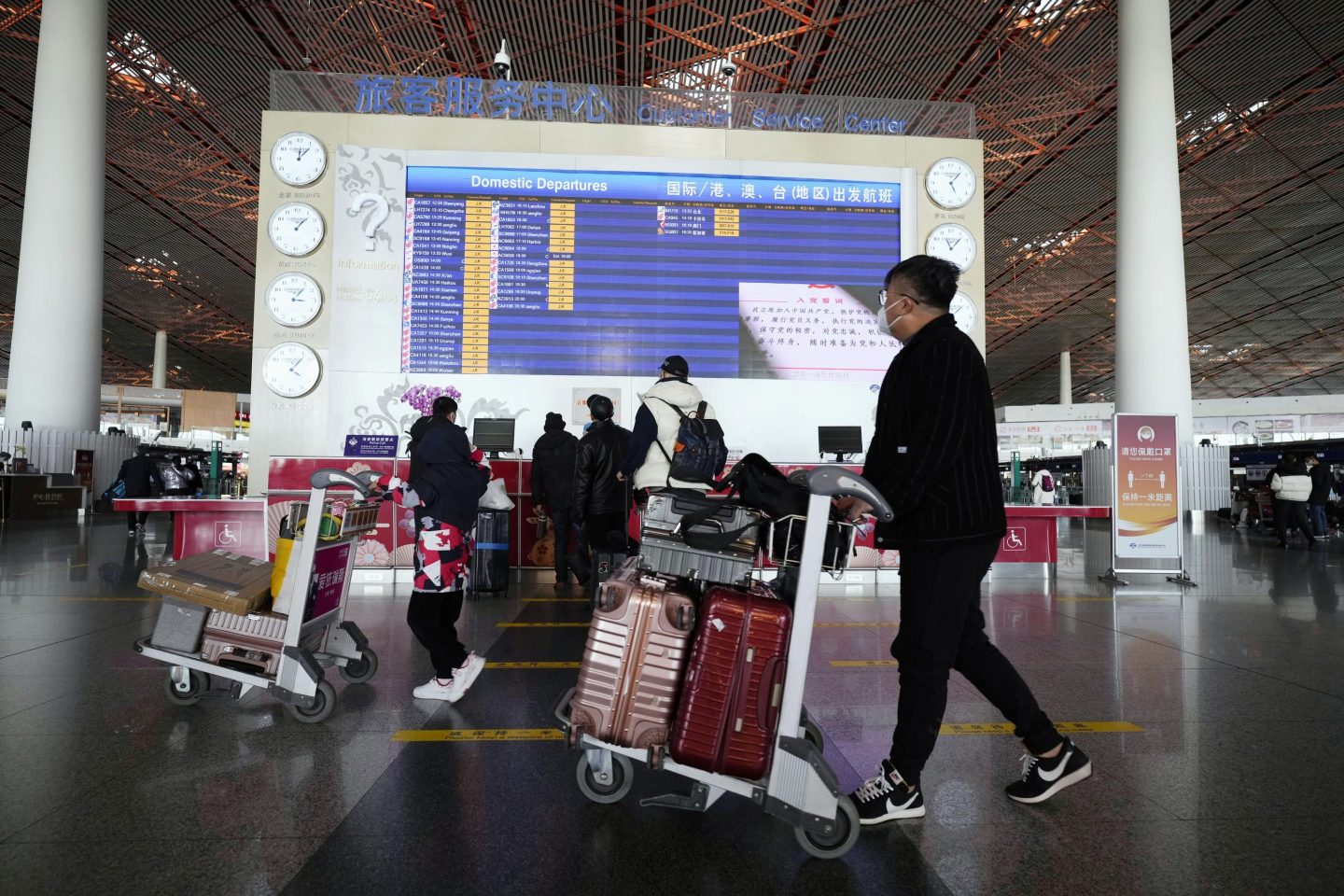 People walk with their suitcases through a departure lobby of Beijing Capital International Airport on Dec. 27, 2022. China said the previous day it will reopen borders and abandon quarantine measures that have been in place to stem the spread of coronavirus infections on Jan. 8, in a shift away from its strict "zero-COVID" policy.
Kyodo News via Getty Images

Many of Wall Street’s top minds were hoping for a Santa Claus rally heading into the holidays after a brutal year in the stock market. The idea—which admittedly sounds like wishful thinking from the leaders of the world of finance—is that as the holiday season comes around, increased consumer spending and investor optimism lead to a brief jump in stock prices. In the final week of 2022, though, there’s been no rally. The S&P 500 is down more than 3% in December, and the tech-heavy Nasdaq Composite has shed 6%.

Ipek Ozkardeskaya, a senior analyst at Swissquote Bank, said that while 2022 may not end on a positive note, there has been “encouraging news” in the form of China’s economic reopening. Chinese equities are on fire after officials in the country said it will remove quarantine requirements for international travelers starting Jan. 8. The shift in travel policy is another sign that Beijing is moving away from nearly three years of strict zero-COVID restrictions that hurt economic growth and sparked protests across the country in recent months.

But Ozkardeskaya said that she sees just a “minor” boost to stocks from China’s reopening that may not be enough to avert a “sustained selloff” below 3,800 for the S&P 500.

She noted that there have been 250 million new COVID-19 cases since China began rolling back its COVID-zero policies, which will “likely throw a shadow on the reopening glow.” These are merely the cases that have been reported, with many experts noting discrepancies in reporting of data out of China and arguing the government may be understating its current surge.

Although the reopening could be a catalyst for a holiday surge in stocks, it will likely be a “mini Santa Claus rally,” Ben Emons, senior portfolio manager at NewEdge Wealth, said.

“You could see a little bit of a rally in the next few days as investors try to digest that scenario of a fully reopened Chinese economy,” he told CNBC, quickly adding that he still expects “choppy trading” in the first half of 2023.

Emons argues that China’s reopening will have both positive and negative impacts for the global economy and the stock market.

On the positive side, China’s economic rebound could act as a “counterweight” to a potential global recession in 2023. But on the negative side, more economic growth will also boost commodity prices globally, keeping U.S. inflation elevated.

That’s bad news for the Federal Reserve, which has raised interest rates to bring inflation back to its 2% target rate throughout 2022. If the Fed is forced to continue raising interest rates in 2023 more than investors are expecting, Emons said that stocks will likely suffer.

And Bridgewater Associates co–chief investment officer Greg Jensen even argued earlier this month that the inflation caused by China’s reopening could lead to a recession that is “double the normal length.”

“Because the Fed’s not going to be at your back for a long time, and that’s a big deal,” he said.

While most experts believe China’s economic reopening won’t be enough to lift U.S. stocks out of the ongoing bear market, there are some obvious winners and losers from China’s actions this week.

China’s version of the S&P 500, the CSI 300, which tracks the 300 largest stocks in the Shanghai and Shenzhen Stock Exchanges, rose 1.15% on Tuesday. And travel-linked stocks across Asia soared: Taiwan’s Phoenix Tours International and Korea’s Lotte Tour Development climbed as much as 10% and 7.7%, respectively, while Japan Airlines rose as much as 2.2%.

In the U.S., the Chinese e-commerce giant Alibaba saw its shares climb as much as 4.7%, while the Shenzhen-based entertainment and technology conglomerate Tencent’s stock jumped 3%.

Oil prices also continued to rise on Tuesday. Brent Crude oil prices traded at over $85 per barrel and are now up more than 10% since their early December dip to $76 per barrel. Ozkardeskaya said she believes that trend will continue as well.

“The Chinese reopening news could give a helping hand to oil bulls for an extension of the rally to the $88 [per barrel] level,” she said. The U.S. dollar also continued to drift lower on the news that China’s economy is set to reopen; gold prices rose to a six-month high, and the metals sector in India’s stock market soared over 4% as China’s manufacturing industry is set to get back to work.