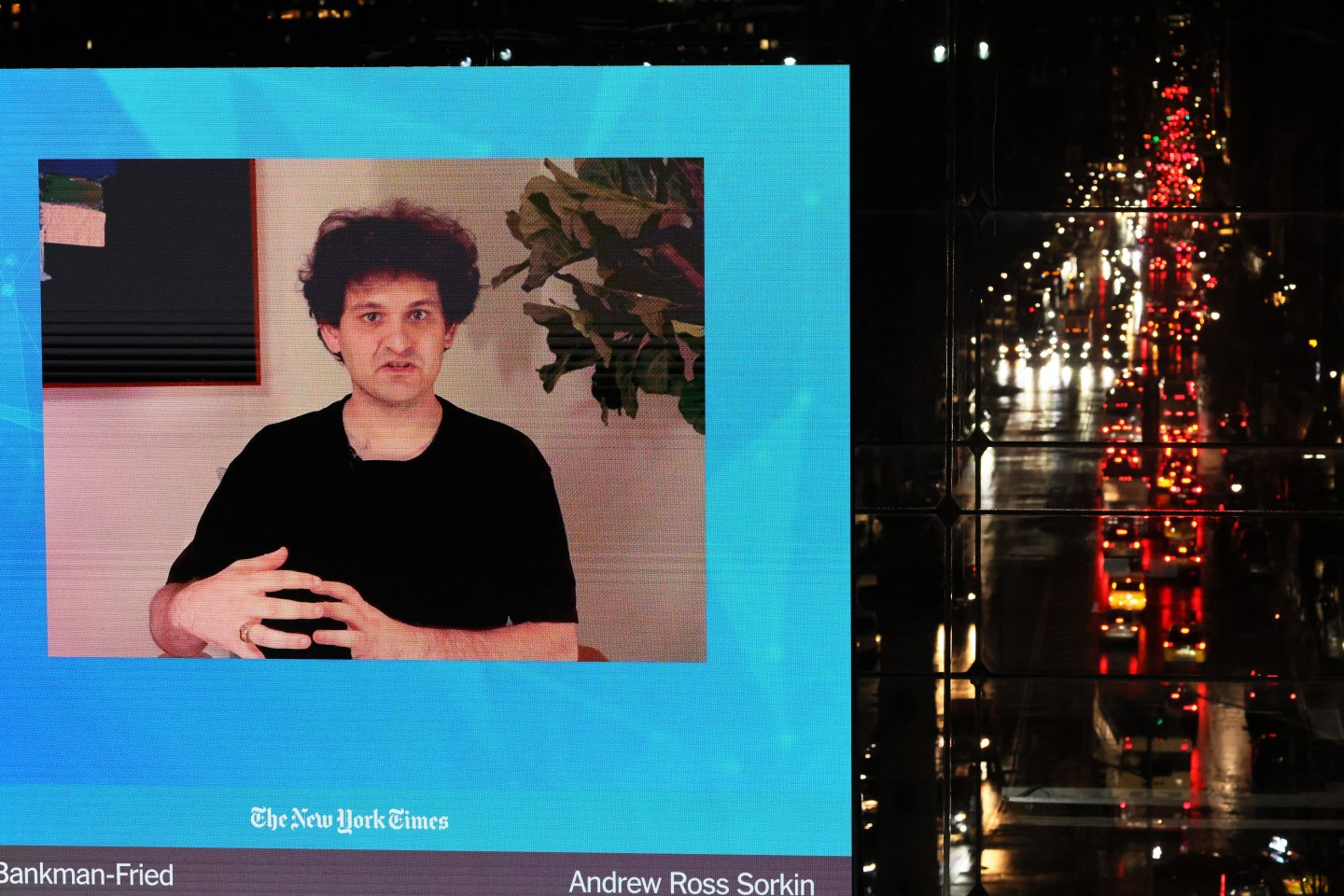 Some 260 FTX employees and a slew of well-tenured bankruptcy and liquidation experts, lawyers, and criminal investigators are trying to salvage pieces of Sam Bankman-Fried’s crypto empire in an effort to make its customers whole.
Michael M. Santiago—Getty Images

The untangling of what was just recently one of the most well-funded startups in the world is playing out in a courtroom for all to see.

Those overseeing the carnage of what is left of FTX have made it crystal clear what it is we are dealing with: “You have witnessed probably one of the most abrupt and difficult collapses in the history of corporate America,” James Bromley, an attorney of Sullivan & Cromwell and one of a handful of lawyers representing FTX, said in FTX’s first bankruptcy hearing near the end of November. For those of us who couldn’t attend the hearing in person, a two-hour recording was just published in court documents at the end of last week, laying bare how 260 FTX employees and a slew of well-tenured bankruptcy and liquidation experts, lawyers, and criminal investigators are trying to salvage pieces of Sam Bankman-Fried’s crypto empire in an effort to make its customers whole.

That group has been left with unreliable books and records, compromised systems, and the remains of a company that never had many controls in place. Echoing earlier statements from current FTX CEO John Ray III, Bromley said that the “lack of corporate control is at a level that none of us in the profession that have looked at it so far have ever seen”). To make matters worse, a “substantial amount” of assets have been stolen or gone missing, Bromley stated during the hearing.

Here are the power players who are now in charge of re-organizing the crypto business, selling off standalone businesses, and selling assets:

— John Ray III: You should already know this by now, but Ray, the lawyer best known for overseeing the high-profile Enron and Nortel bankruptcies, was named the new CEO of FTX right after SBF resigned. Despite his tenured experience with complex re-organizations, he described the FTX catastrophe as “unprecedented” shortly after he took control of the company.

— Steven Peikin: He is one of the Sullivan & Cromwell investigators handling the FTX mess. Peikin was the U.S. Securities and Exchange Commission’s co-director of the division of enforcement between 2017-2020. (You may remember his name coming up when the SEC brought charges against Theranos, Elizabeth Holmes, and Sunny Balwani in 2018.)

— Jamie McDonald: A current Sullivan & Cromwell partner, he will also take on investigating. McDonald was the former head of enforcement at the Commodity Futures Trading Commission between 2017-2020.

— Nicole Friedlander: Another investigator and current Sullivan & Cromwell lawyer, Friedlander is the former chief of complex frauds in the cybercrime unit for the Southern District of New York.

— Mitchell Sonkin: He has been made an independent director over FTX’s U.S. entity. Sonkin is the former managing director of MBIA Insurance Corporation and led their efforts in a legal spat with underwriters of Puerto Rico bonds.

— Matthew Rosenberg: He is an independent director over the FTX-affiliated hedge fund controlled by SBF and FTX co-founder Gary Wang, Alameda Research. Rosenberg is a partner at Lincoln Park Advisors in Chicago.

— Rishi Jain: He has been named independent director of FTX Ventures, the investment arm 100% controlled by Bankman-Fried that had been led by venture capitalist Amy Wu. Jain is a managing director at the private equity consulting firm Accordion Group, where he has specialized in liquidity management and strategic planning and implementation for corporate turnarounds.

— Joseph Farnan and Matthew Doheny: They are the independent directors who oversee FTX’s global exchange, which was 75% controlled by SBF and 25% controlled by third-party investors. Farnon is the former U.S. district judge for the District of Delaware. Doheny is the president of North Country Capital.

There’s also a handful of companies and firms who are involved, including:

— Chainalysis, a firm specializing in tracking cryptocurrency and blockchain transactions

— Quinn Emanuel, a law firm that will give advice to the newly-appointed independent board of directors

This new group in control of FTX is also in constant communication with regulators, including:

— The Department of Justice

— The Securities and Exchange Commission

— Both the Senate and House of Representatives

Very relevant to readers of this newsletter will be the choices that Rishi Jain makes with FTX’s venture arm, which had backed more than 20 crypto startups—though it’s important to note FTX made investments across its various business divisions. Bromley said at the hearing that new FTX leadership is parsing through FTX’s various investments and determining whether they are able to sell off any of them, and how much they could be sold for. For a comprehensive list of all the various entities FTX capital has touched, see this story from Fortune.

If you want to listen to the duration of the two-hour hearing, you can do so here. If not, here is a brief highlight reel:

— FTX attorney Bromley said an “investigation will have to take place” regarding Binance’s divestment of its equity stake to FTX in 2021.

— As of the date of the hearing, which took place on Nov. 22, there are still roughly 260 employees at FTX. (Bromley said they have been focused on making sure that crypto assets at FTX are secure and that records are kept in “a manner that is appropriate.”)

— FTX has continued to suffer from cyber attacks since filing for bankruptcy and the group is working to put controls in place to manage it.

— Certain entities were not determined to be debtors and weren’t included in the bankruptcy filing, including LedgerX, which Bloomberg reported is currently up for sale.

— There has been evidence that assets have been moved from debtor estates to the Bahamas.

— There are potentially more than 1 million creditors—most of whose names and addresses have been redacted at this point.

- X1, a San Francisco-based credit card company, raised an additional $15 million in Series B funding. Soma Capital led the round and was joined by investors including The Points Guy founder and CEO Brian Kelly and Cruise CEO Kyle Vogt.

- ​​Prophia, a San Francisco-based lease abstraction and commercial real estate data management provider, raised $10.2 million in Series A funding. Cercano Management led the round and was joined by investors including SignalFire and others.

- Certemy, a Los Angeles-based compliance and credentialing management software for employers and professional credentialing organizations, raised $9.7 million in Series B funding. Numeta Capital and Apis Holdings co-led the round.

- Lux Semiconductors, an Albany, N.Y.-based semiconductor developer, raised $2.3 million in seed funding. Ultratech Capital Partners led the round and was joined by investors including Lockheed Martin Ventures, Hemisphere Ventures, and others.

- Funds advised by SK Capital Partners and Edgewater Capital Partners, acquired the scintillation and photonic crystals business of Saint-Gobain and renamed it Luxium Solutions. The company will be based in Hiram, Ohio. Financial terms were not disclosed.

- The Stephens Group acquired Princeton TMX, a Fort Wayne, Ind.-based automated transportation management platform. Per terms of the deal, management will retain a minority stake. Financial terms were not disclosed.

- Partech, a Paris and San Francisco-based investment firm, raised €120 million ($126.47 million) for its fourth seed fund focused on European and international startups at the pre-seed and seed stage.