Fast-fashion brands claim they’re cleaning up their act for the planet, but their premise might be inherently flawed 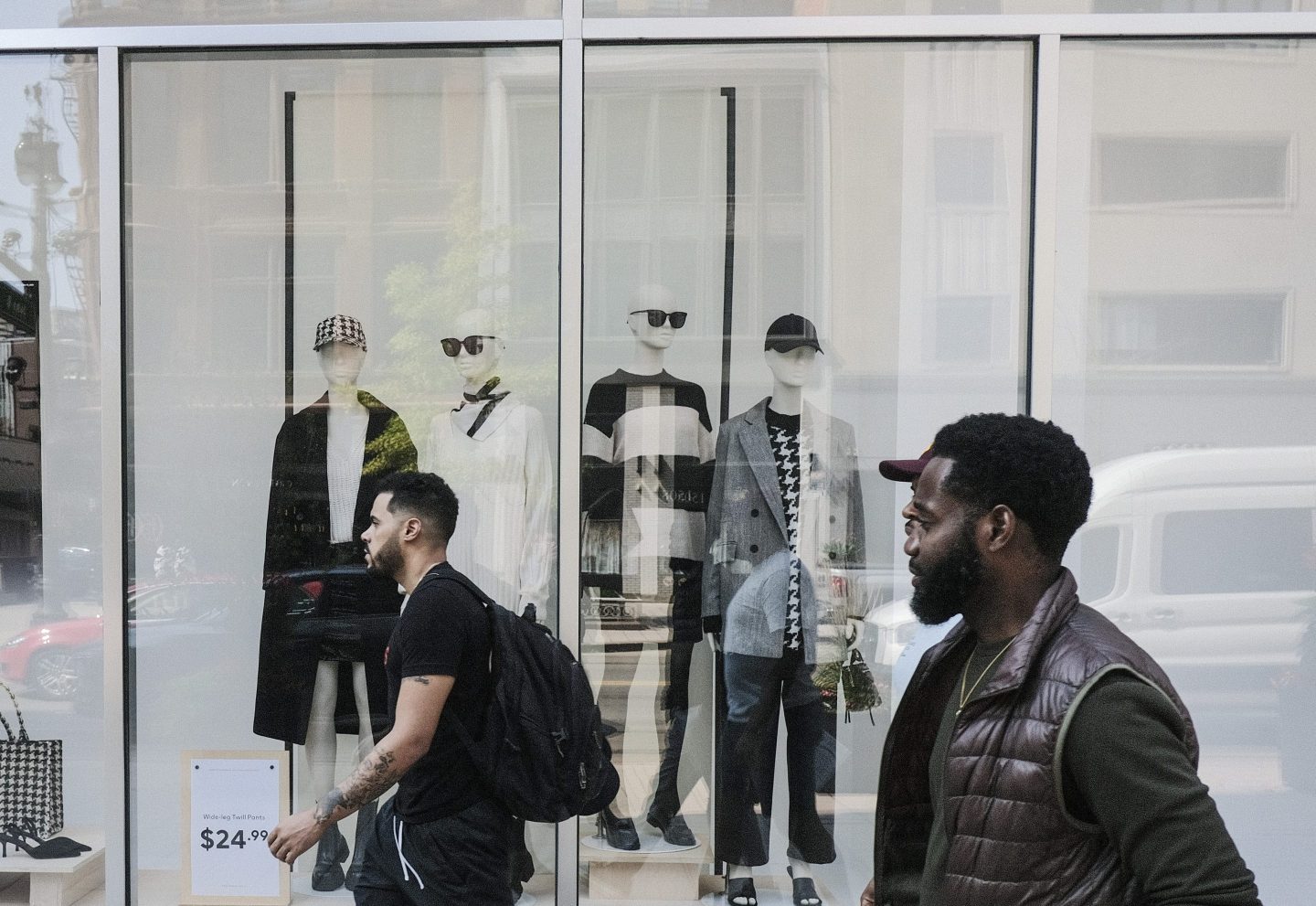 H&M is a leader among fast-fashion brands when it comes to tracking its climate footprint and ensuring transparency across its supply chain.
Matthew Hatcher—Bloomberg/Getty Images

The fashion industry has a fossil fuel problem. According to the United Nations Environment Programme, fashion is responsible for up to 10% of global carbon dioxide output—more than international flights and maritime shipping combined.

The sector consumes around 100 billion cubic meters of water and produces some 92 million tons of textile waste annually—87% of which ends up in landfills or polluting incinerators. It also accounts for one-fifth of the 300 million tons of plastic produced globally each year and contributes to an estimated 17% to 20% of water pollution through processes such as dyeing.

These figures are set to keep growing: Production of synthetic fibers, which are usually made with materials extracted from fossil fuels, is estimated to increase over the next two decades, while overall apparel consumption is projected to rise by 65% to 102 million metric tons a year by 2030.

In light of these figures and a growing number of sustainable fashion brands, the sector is starting to clean up its act, or at least show consumers it’s trying to do so. Fast fashion has been at the forefront of this change, despite being a main driver of consumerism and waste: Take ultra-fast-fashion brand Boohoo, which this year alone introduced 18,000 new items to its website, while Chinese fashion retail website Shein—which recently came under fire for its unethical business practices—has added over 300,000 styles to its U.S. platform.

Over the past decade, claims about circularity, recycled plastic fibers, and zero emissions have become central to the marketing budgets and business development plans of many high-street companies such as ASOS, H&M, and Everlane. They have published sustainability reports and tout initiatives or collections as environmentally forward.

In many cases, such initiatives are meaningful but not significant enough to compensate for the overall impact of the industry. In September, fast retailer Uniqlo unveiled a 1-million-square-foot solar-paneled roof on its New Jersey distribution center aimed to provide “the equivalent of enough clean energy to power 500 households a year” and “mark a significant step forward in Uniqlo’s overall climate strategy,” according to a statement. Inditex’s Zara recently committed to make 50% of the items it sells in 2022 with recycled materials and “ecologically grown cotton.”

The H&M Group—arguably the fashion giant that’s devoted the most efforts to track its climate footprint and ensure transparency across its supply chain—has long been running an array of sustainability programs, encouraging customers to bring back unwanted clothes for reuse and using organic cotton and recycled materials for its Conscious Collection since 2010. Still, the retailer is facing scrutiny in Britain, Norway, and the Netherlands over its sustainability claims, and a Quartz investigation published last summer showed that its products’ environmental scorecards were misleading.

But with low prices and rapid consumption at the very core of these companies’ cheap-and-fast business model, can these solutions and impressive-sounding targets ever really mitigate their environmental impact?

The answer is complicated.

“You would have to look at the specific data for each campaign or tack,” says Maxine Bédat, director of the New Standard Institute, a think tank working with scientists and researchers to advance accountability in fashion. “Generally speaking, though, the marketing is often way ahead of any actual capability to shift things. It’s greenwashing.”

That’s not to say companies shouldn’t pursue sustainability programs, she adds, “but they should spend more of their money on the actual programs rather than on advertising them to the public. And ask themselves: ‘How does this initiative compare to the scale of progress necessary?’ Ultimately, that’s what really matters.”

That, and ensuring a better, more tightly controlled supply chain.

Cleaning up the supply chain

According to the World Resources Institute, the manufacturing supply chain contributes to 96% of a fashion brand’s environmental footprint. Yet to date, over half of major companies still do not disclose information about their factories.

That’s mainly because there isn’t any legislation requiring it. Most disclosures are voluntary, so brands can continue being reticent about them.

H&M is an exception. The company lists its suppliers on the Open Apparel Registry, an open-source tool that seeks to improve human rights and environmental conditions in and around factories and facilities. It also works with industry group Textile Exchange to evaluate alternative materials that could reduce negative environmental impact. (Uniqlo declined to comment for this piece, while Zara did not respond.)

“The biggest emissions happen when sourcing raw materials and manufacturing fabric and garments,” says Henrik Sundberg, climate impact lead at the H&M Group. “That is why helping suppliers transitioning from fossil fuels to renewable alternatives, energy efficiency, and reducing and recirculating water when dyeing fabrics are some of the areas we are prioritizing.”

The retailer’s Green Fashion Initiative aims to cut emissions across its value chain by helping factories invest in technologies and processes that can reduce energy needs. It’s also the lead founder of the Apparel Impact Institute, whose Fashion Climate Fund seeks to unlock $2 billion in capital to accelerate decarbonization and “drive collective action to tackle fashion’s supply-chain emissions,” Sundberg says.

Veronica Bates Kassatly, a fashion industry analyst and critic of H&M’s sustainability assertions, believes that’s still not enough to move the needle. In fact, she says these efforts may actually distract from the damage fast fashion is doing to the planet.

“Yes, sourcing and manufacturing are the big-ticket items for greenhouse emissions. But where that manufacturing happens—where you spin your yarn, where you do your knitting, weaving, dyeing, and finishing—is far more important than whether you bought organic cotton or conventional cotton, because different countries hold very different power grids, and hence vastly different carbon intensities,” she says. For instance, in 2019 China’s carbon intensity—which measures how many CO2 emissions are produced per kilowatt-hour of electricity consumed—was 701% higher than France’s and 203% higher than that in the U.S.

“H&M has almost none of its factories in France, or Europe, so you do the math,” Bates Kassatly notes. What’s more, presenting material alternatives as more environmentally sound than conventional materials like cotton is misleading, she adds.

“Fast fashion’s extensive use of synthetic materials—and their claim they are sustainable—is hugely problematic,” she says. “Natural fibers like cotton and silk have their own environmental costs, of course, but saying that polyester is better, and that if you switch out your fibers to fossil-fuel–made ones your production becomes magically sustainable is utter nonsense—and based on very insubstantial data.”

For much of the past decade, such data was what formed the backbone of the Higg Index, the industry’s leading suite of tools for assessing the environmental impact of all sorts of fabrics and materials.

The system was introduced in 2011 by the Sustainable Apparel Coalition (SAC), an alliance of almost 150 retailers, including some of the world’s largest fashion brands and retailers, from H&M to Amazon. It aims to curtail water use, reduce greenhouse gases, rein in the use of finite resources like fossil fuels, and improve management of chemicals.

Since its launch, however, it has received a fair share of criticism from independent experts like Bates Kassatly, particularly for its Materials Sustainability Index (Higg MSI). That tool has attributed a higher environmental impact to wool over polyester, for example, even though polyester is derived from oil and is a prime source of microplastic pollution. Its manufacturing produces some 40% of the industry’s overall emissions.

SAC recently pressed pause on using the Higg MSI for its Transparency Program, announcing it would work through “crucial insights and learnings” from a pilot designed to reposition the rating. Yet to date, the Higg is still what most retailers and policymakers use. The European Green Deal is considering using Higg MSI data to influence its “substantiating green claims” legislation and Product Environmental Footprint (PEF) tool, which aims to quantify the relevant environmental impacts of products.

“The Higg Index does not consider the full life cycle of each material, or how it was sourced, and collates secondary data from analyses done by trade associations or large fashion companies that may have a vested interest in synthetic fibers,” Bates Kassatly says. “Most of its findings are very narrow in scope, not publicly accessible, and not peer reviewed. It’s a critical tool, and yet, at its core, it’s flawed. Until that changes, I see very little opportunities to move the industry forward, and get consumers to really question the origins and sustainability of their clothes.”

Bédat of the New Standard Institute offers a similar sentiment, though she isn’t as critical toward the Higg. “We need to recognize that a lot of times these tools come out of the industry because the industry knows the information best,” she says.

“As it stands today, fashion is a very opaque industry that’s still largely unregulated,” Bédat adds. “And we can’t expect consumers to take it upon themselves to change it, because they simply aren’t educated enough to do so. The system just has to step up, starting with better ways of keeping itself in check.”

Ultimately, those ways might have to come from the top down.

“This is a profit-driven industry,” notes Bédat. “Whatever these retailers are spending on their ‘sustainability efforts’ always has to have a bottom-line benefit.”

That places a fundamental limit on the degree to which fast fashion—and public companies in particular—can genuinely push for a paradigm shift. Absent government intervention, says Bédat, brands are likely to continue churning out new products at an unprecedented pace and staying vague about their climate footprint.

“Most large retailers will keep not doing enough until tighter policies are in place,” she says. “Better legislation and more stringent regulations are key. Governments need to realize how important the fashion industry is to their climate goals and act accordingly. But I can’t say we’re there yet.”

Correction, Nov. 29, 2022: A previous version of this article misstated the SAC program that has been paused and the reasoning behind that decision.