Too big to boycott: Qatar’s FIFA World Cup has been controversial, but advertisers ‘want to make the most of it’ 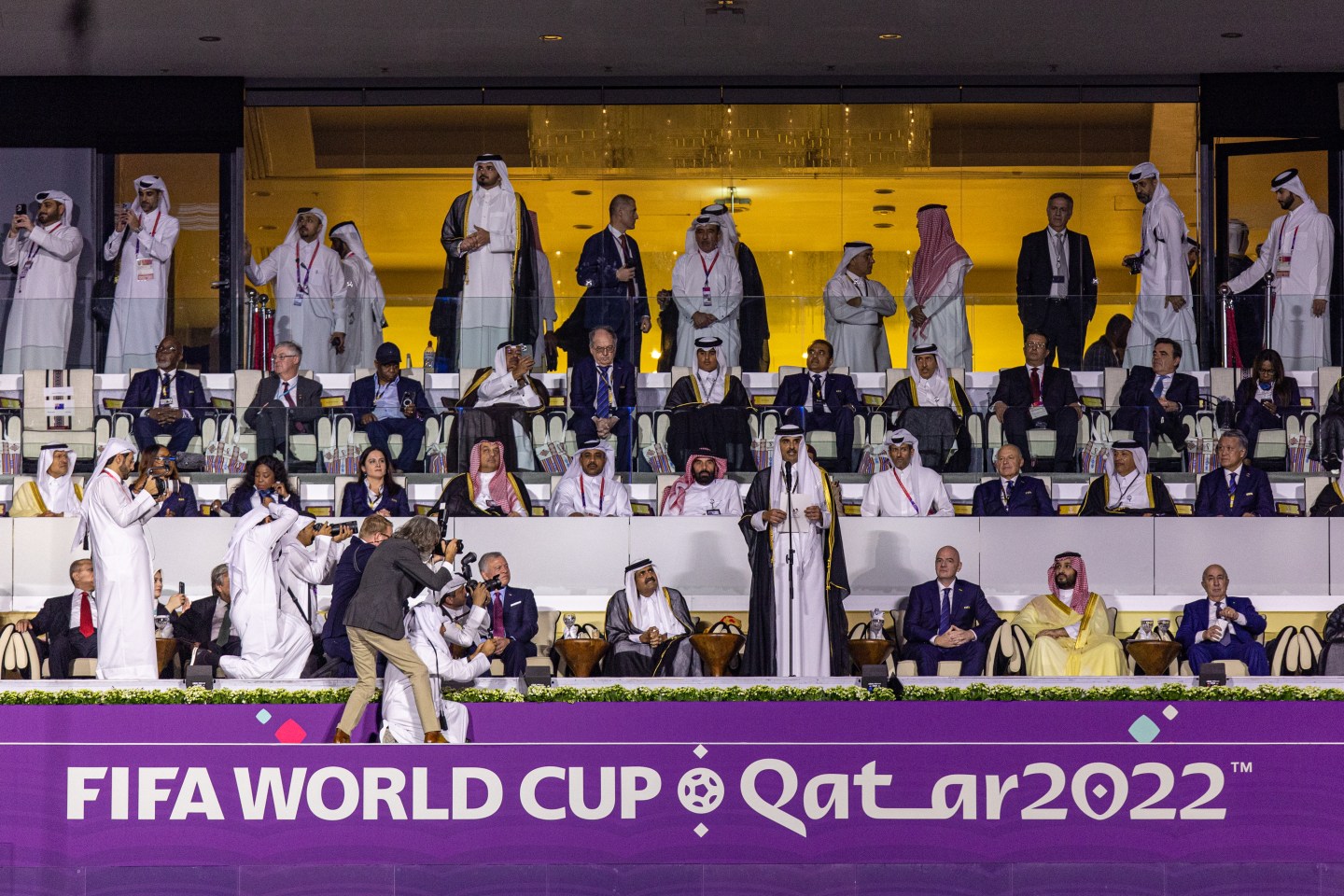 Qatar 2022 is arguably the most scrutinized World Cup in history.
Christopher Pike—Bloomberg via Getty Images

There’s already never been a World Cup quite like Qatar 2022 before a ball has even been kicked.

Human rights groups are in uproar over everything from the treatment of LGBTQ people in a country where homosexuality is illegal to the deaths of construction workers building the stadiums. Organizer FIFA is recovering from corruption scandals that cast aspersions on how Qatar was awarded the competition to begin with. Erstwhile FIFA chief Sepp Blatter said he regretted that the Gulf country was picked as host.

But for all the handwringing over the quadrennial tournament, the World Cup could still attract 5 billion viewers — almost two-thirds of the planet’s population. And when there’s an audience, brands will pay to reach them.

Bloomberg News contacted 76 companies sponsoring either the tournament or the teams taking part. They ranged from Adidas AG and Coca-Cola Co. to Volkswagen AG and Microsoft Inc.’s XBox, and were based in places where human rights criticism was widespread — the US, Canada and in Europe. None of the seven FIFA sponsors said they would make any changes to their global advertising plans to reflect concerns for human rights.

Read more:
Qatar just spat in the face of Budweiser’s $75 million World Cup sponsorship
How to watch the FIFA World Cup in Qatar live online for free—and without cable

Of the 69 sponsors of national teams, 20 responded to express their commitment to human rights, though declined to disclose if or how their marketing might change. Thirteen companies did say they would make adjustments, though few have significant business ties to Qatar. They include Danish brewer Carlsberg A/S, Belgian chocolatier Cote d’Or and the Belgian business of accountancy firm PwC.

Qatar 2022 is arguably the most scrutinized World Cup in history, and executives are faced with a dilemma as pundits and politicians raise concerns over the host country. Yet financially it’s a no-brainer: the potential to get hundreds of millions of eyeballs on a logo or marketing slogan during a troubled time for the global economy.

The tournament, which is starting in November for the first time to avoid the summer heat, is expected to deliver record revenue for FIFA, topping the roughly $5.4 billion the 2018 World Cup in Russia generated, Bloomberg reported last week.

“The public has become much more vocal about human rights than it was five or 10 years ago,” said Sarah Simon, a European media analyst at Berenberg Bank in London. “But it’s a one-in-four-year opportunity, so advertisers who advertise around the World Cup want to make the most of it.”

With audiences fleeing traditional broadcasters for online streaming services, sport remains one of the last bastions of live television viewing. The Olympics, Super Bowl and World Cup are some of the few occasions where brands can be counted upon to pay big bucks to reach a live audience, giving them outsized importance to TV advertising revenue.

The economic slump, meanwhile, has prompted brands to curb their marketing. They’ll spend an estimated $90 billion less on advertising this year and next than previously expected, according to data company WARC.

That makes the World Cup, which opens with a game between Qatar and Ecuador in Doha on Sunday, a timely bright spot — regardless of the controversy. The boost from the tournament is likely to offset the advertising market’s broader weakness.

UK commercial broadcaster ITV Plc, for example, is predicted by analysts to record fourth-quarter sales on a similar level to a year before thanks to showing World Cup games. That’s as ad income at rivals is expected to dip.

“For all of the controversy around the World Cup, it couldn’t be coming at a better time for broadcasters,” said Matthew Bloxham, a media analyst for Bloomberg Intelligence. “Their advertising revenues are facing tough headwinds, and this will ease some of the pain.”

To say it’s a normal World Cup for advertisers and sponsors would be wrong, though. Many brands backing the Danish, Belgian and Dutch teams said they were not going to make use of ticket allocations for matches.

Carlsberg said it has halved its marketing budget compared with last year when Denmark played in the European Football Championship. It’s focused on supporting the team before it goes to Qatar, a spokeswoman said by email. “Once the tournament starts, we have scaled back significantly compared to what we would normally do,” she said.

Cote d’Or said executives wouldn’t attend the World Cup or give tickets to customers, even though the brand is part of food distributor Mondelez International Inc., whose products are readily found on Qatari grocery store shelves. PwC’s Belgian arm is doing likewise, while the company has a big presence in Qatar.

Indeed, companies will closely monitor the popular mood as the tournament unfolds toward the Dec. 18 final. If the volume of criticism mounts, then some may think twice about continuing with campaigns that have been months in the planning, according to Martin Sorrell, the veteran British advertising executive who is now chairman of S4 Capital Plc, the digital ad agency he founded after leaving the giant WPP Plc.

“If there was significant momentum, if campaigns developed, criticism developed, then people would review their positions,” said Sorrell. “There may be clients who are concerned about it — the human rights issue and the other policies that Qatar pursues around LGBTQ. So, there might be some people who take a position on that. But that decision will largely have been made some time ago.”

The experience of British brewer BrewDog Plc shows some of the pitfalls in trying to go the other way. The company decided to tap into some of the negative sentiment towards Qatar, running what it calls an “anti-World F*Cup” campaign. “First Russia, then Qatar. Can’t wait for North Korea,” runs one billboard. It also pledged to donate profit from one of its beers sold during the event to human rights charities.

But no sooner had the advertising campaign been unveiled, social media posts pointed out that BrewDog still planned to show matches in its bars and had signed an agreement to supply beer to Qatar’s government-owned distributor. Labor union Unite Hospitality criticized how the brewer treats its own workers, labeling the campaign “disingenuous.” BrewDog last year apologized to former employees who accused the firm of bullying.

Then there are those that publicly support LGBTQ rights yet remain sponsors of either the tournament or FIFA itself, such as Adidas, brewing giant Anheuser-Busch InBev SA, Coca-Cola and McDonald’s Corp. They defend their continued involvement by pointing toward the improvements in Qatar.

The four companies told Bloomberg they believed the World Cup had brought positive changes and pointed to their support of efforts by FIFA, the International Labour Organization and other groups. Adidas “has worked with partners to also improve the human rights situation in Qatar in recent years,” a spokesman said in an email. “Adidas was not involved in the decision to award the World Cup to Qatar.”

Adidas Chief Financial Officer Harm Ohlmeyer told investors last week that he expects a “tailwind” of as much as €400 million ($417 million) in sales related to the World Cup.

Qatar has made progress in some areas more than others when it comes to the complaints levelled against it. And after more than a decade under fire, the government’s patience for criticism may be wearing thin.

The country has improved living standards and safety for low-income workers and enacted labor reforms that took effect in 2021. It’s the only Gulf state with a universal minimum wage and workers are now able to leave jobs more easily. Activists have acknowledged these measures while highlighting gaps in the system, such as a failure to stamp out predatory recruitment fees for migrant workers.

The Qatari government has been less quick to address concerns about the treatment of LGBTQ people. Human rights groups and journalists say that some individuals have reported being detained and harassed by security forces as recently as September. An internal organizer document indicates Qatar may choose not to enforce rules against promoting LGBTQ rights during the tournament.

Initially Qatar “considered some of the criticism as positive and useful in helping us to develop aspects of ours that need to be developed,” Qatar’s ruling emir Sheikh Tamim bin Hamad Al Thani told local lawmakers last month. But he shot back at what he called an “unprecedented campaign” full of “fabrications and double standards” with dubious motives.

The ultimate determinant of how enthusiastically brands get behind the tournament may be simply which teams progress. If their home nation advances, there’s scope for opportunistic ad campaigns.

“Brands will look for an angle that will be able to cut through at minimum cost,” said Nick Fox, chairman of advertising agency Atomic in London. “Rather than paying millions of dollars for traditional channels, they’ll be looking to snipe around the edges.”

—With assistance from David Hellier and Jessica Loudis