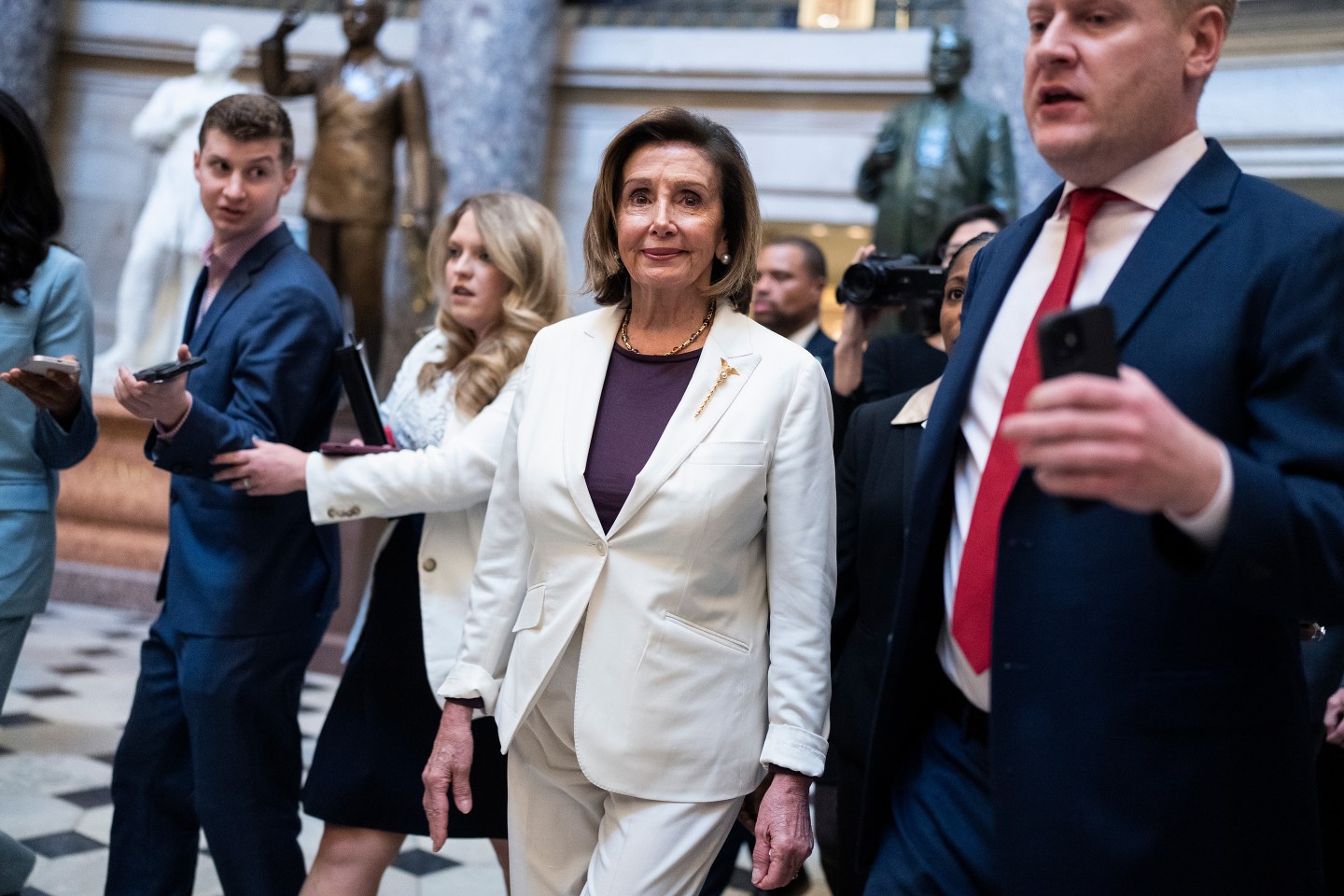 Speaker of the House Nancy Pelosi, D-Calif., makes her way to the floor to announce she is stepping down from her leadership position on Thursday, November 17, 2022.
Tom Williams—CQ-Roll Call, Inc/Getty Images

– Making history. After a historic career that saw her become the first female speaker of the House and lead Democrats for two decades, Nancy Pelosi announced yesterday that she would not seek another term in her party’s leadership.

The 82-year-old congresswoman’s decision makes way for a new generation to lead the Democratic caucus, a sensitive issue for an aging party that some see as at risk of becoming a gerontocracy.

“For me, the hour has come for a new generation to lead the Democratic caucus that I so deeply respect,” Pelosi said in a Thursday speech. “We must move boldly into the future.” She made the announcement after Republicans won back control of the House, securing 218 seats. (Democrats will control the Senate.)

Speaker of the House Nancy Pelosi, D-Calif., makes her way to the floor to announce she is stepping down from her leadership position on Thursday, November 17, 2022.
Tom Williams—CQ-Roll Call, Inc/Getty Images

Pelosi was first elected to Congress in 1987. She was in her late 40s, typical for female politicians who historically run for office later in life, often after raising families. Pelosi quickly became a power player among Democrats, known primarily for her fundraising savvy.

In 2007, she became Speaker of the House when Democrats won the 2006 midterm elections, making her the highest-ranking woman in the history of American politics until Kamala Harris’s vice president appointment in 2020. President Joe Biden called Pelosi “the most consequential speaker of the House of Representatives in our history” in a statement yesterday.

The speaker reportedly prepared two speeches yesterday, making the final decision about her political future at the last moment. She settled on continuing to serve in Congress but will no longer seek to lead the party.

Pelosi’s announcement comes just weeks after her husband, Paul Pelosi, was beaten with a hammer in an attack intended for the politician. Pelosi said yesterday that the assault influenced her decision—but not in the way some might expect. The attack almost compelled her to stay on as leader because she “couldn’t give them that satisfaction” of intimidating her out of politics. Ultimately, however, she was “ready to step aside.”

A new generation of Democratic politicians is ready to assume the now vacant post, with candidates like Rep. Hakeem Jeffries (D-N.Y.), Rep. Pete Aguilar (D-Calif.), and Rep. Katherine Clark (D-Mass.). Clark became the second most powerful woman in Congress in 2020 when she stepped into the role of assistant speaker. In a 2020 interview with Fortune, Clark, 59, rejected the idea that “one woman is enough.” As she told me then, “I’ve always been inspired by some trailblazing women—including Nancy Pelosi.”

- Swiftly angered. After selling 2 million tickets in pre-sale, Ticketmaster canceled its general public sale for Taylor Swift’s upcoming Eras tour. The decision and Ticketmaster site glitches earned the ire of Swifties. The company already faces increased scrutiny from lawmakers who accuse it of being a ticketing monopoly. Fortune

- Location confirmed. Brittney Griner was transferred to a penal colony about 300 miles outside of Moscow, the WNBA star’s lawyers confirmed yesterday. She will begin serving a 9-year sentence unless the U.S. negotiates her release. Reuters

- Highest bidder. At an estate sale for Joan Didion’s possessions this week, bidders paid $27,000 for a pair of the literary icon’s sunglasses, $11,000 for a set of blank Moleskin notebooks, and $14,000 for well-used (and stained) table napkins. The proceeds will go toward care for Parkinson’s patients and charities tied to Sacramento, Calif. Guardian

- Space for funding. SpaceX, run by Elon Musk and president Gwynne Shotwell, is reportedly in talks to raise funds that would value the commercial space business at more than $150 billion. Bloomberg

- Ready or not. Michelle Obama considered wearing her natural hair in braids during her time as the first lady but ultimately decided that Americans were not ready to see natural Black hair in the White House. “Let me keep my hair straight. Let’s get health care passed,” she said of her thinking. Washington Post

- Queens of Christmas. The U.S. Patent and Trademark Office this week denied Mariah Carey’s request to trademark the phrase “Queen of Christmas.” Her application received pushback from singer Elizabeth Chan whose career is devoted to Christmas music. Washington Post

For the last time: Body types are not trends Glamour

"Keke is just a part of who I am. It’s been a winding road of trying to figure out how to do what I love but also exist outside of this caricature."

—Keke Palmer on developing her public persona, with a stage name that comes from her middle name, Keyana. Her given name is Lauren.