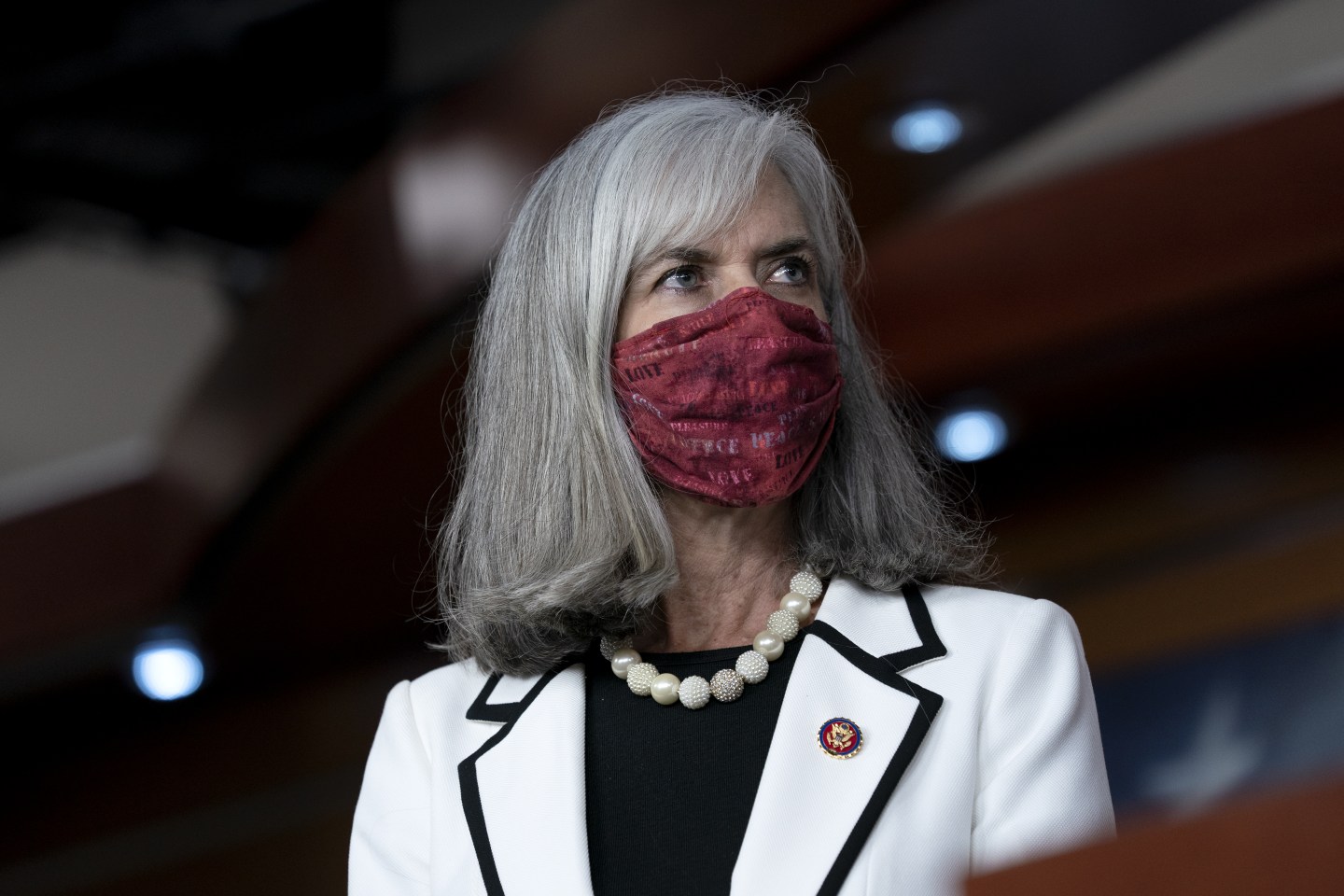 Rep. Katherine Clark of Massachusetts will be assistant speaker in the House of Representatives next term.
Stefani Reynolds—Bloomberg/Getty Images

For years, the Democratic caucus has been led by House Speaker Nancy Pelosi—the lone woman at the top in Congress.

Next term, Pelosi will be joined by Rep. Katherine Clark, the Massachusetts congresswoman. Democrats elected Clark to the role of assistant speaker last week in a race against Rhode Island Rep. David Cicilline.

Although the role doesn’t determine who is next in line for the speakership, Clark’s ascension to the No. 4 position in the House is still notable during a two-year period that could be Pelosi’s last in the No. 1 slot; in 2018, the speaker promised some members of her party that she would serve only four more years.

Clark is only the second woman to ever serve in House leadership and will soon be the second highest-ranking woman in Congress. She succeeds Rep. Ben Ray Luján, who was elected to the Senate this month. (His departure leaves the group of four House leaders with one nonwhite member, Majority Whip Jim Clyburn.) Clark spoke to Fortune about the achievement of gender parity in House leadership and her goals for the caucus this term. This interview has been edited and condensed.

Fortune: What does it mean, from your perspective, for leadership to now be at gender parity?

Rep. Katherine Clark: This is an achievement for women. For too long, women have been left out and left behind. And it makes a difference. When we have a seat at the leadership table, the priorities shuffle. This is an important time as we see women facing such challenges from the economic fallout of this pandemic, to have another member of top leadership representing them.

When women have a seat at the table, we focus on caring for kids and older parents and on reproductive health care and maternal health, on economic issues like paid family leave, and childcare and gender pay inequality. These are the type of issues that are going to be key as we look at how we get our country back on track, not only from this pandemic and the economic devastation that women are facing, but also from the blatant misogyny of the Trump administration.

We represent 51% of our population. It’s long past time that we give up the idea that ‘one woman is enough.’ I’ve always been inspired by some trailblazing women—including Nancy Pelosi.

What do you think that House leadership should be doing to prepare for a potential transition of the speakership in two years?

What we need to do is focus on governing and let the American people know that we see them. And we’re working for them.

Those are going to be tremendously big shoes to fill when Speaker Pelosi decides to leave office. It’s going to take a team of us to be able to do what she’s done—to bring that legislative acumen, her fundraising star power, her ability to understand our caucus and lead us forward. For the moment, I am grateful that she is going to be the speaker for the next session and help us turn the focus back off the wealthy and the well-connected and back onto families—to the single moms who are trying to care for their children with schools that are closed to the women veterans who are facing food insecurity, and to all of our families who are looking at homelessness, and children who they are putting to bed hungry. That’s going to be the focus of my work as assistant speaker.

What are your legislative priorities as assistant speaker this term?

A top priority for me is childcare. I remember what it was like to realize that my entire salary was going to childcare for my three children—and the pandemic’s impact on what was already a very fragile industry has been devastating. We are not going to have an economic recovery without childcare. It’s the type of issue that resonates not only with parents of young children, and childcare providers, who are overwhelmingly women and women of color, but also with the business community. That’s the work that I’m going to be focused on helping our members be successful on.

In July, we passed in the House a $50 billion bailout package for the childcare industry. That’s what we need to stabilize. If we continue to lose childcare slots for children and see childcare centers close, we will not have an economic recovery. We know the losses are in the billions of dollars a year for loss of productivity due to lack of childcare. And we saw that 800,000 women left the workforce in the month of September—mostly because there wasn’t adequate childcare available. We need to make sure that we stabilize this industry, that we are investing in providers so that they can while they perform this essential work. We need to make sure that childcare remains affordable for low and moderate income families. We have to understand the connection that childcare has with the very basic foundation of our economy.

How are these priorities affected by the potential for a Republican-controlled Senate?

It is going to be up to the Senate, if they keep Republican control, to make a decision: that they are here to serve the American public and work with us. Not because these issues are Democratic or Republican, but because they’re issues for the American people. So far, we have not seen from Mitch McConnell in the Senate that they are willing to shift their focus to the American people. But that’s where we’re going to be. And I certainly hope that as we proceed, and Joe Biden takes takes office in January, that the Republicans in the Senate will drop their blind allegiance to President Donald Trump and return to their responsibility to governing for all Americans and addressing this pandemic.

What should House leadership do to address some of the divides between progressive and moderate Democrats that have become more apparent in the weeks following the election?

I’m a proud progressive. The reality is, we need a majority to get policies over the finish line. I know that this caucus is extremely diverse and really unparalleled in its talent. It is going to be my job to help pull on that diversity, to weave that into our agenda, to make sure that we are using all the talent of our caucus to move forward and be that engine of change. To make sure that we are committing to governing by including those who feel that they’ve been forgotten, oppressed and overlooked. We’re going to use our diversity of life experiences to inform our policies.

Besides the immediate needs of addressing the pandemic and economic relief, are there any pieces of legislation or issues that you are especially eager to get back to under a Democratic administration?

I would like to bring back our entire agenda that that we passed. For me, childcare, making sure we’re working on workplace harassment, pay equity, reducing gun violence, and addressing climate change are our top priorities as we go forward. As you look at the body of work that the Democrats in the House passed in the last session—there is the blueprint for success for our country.