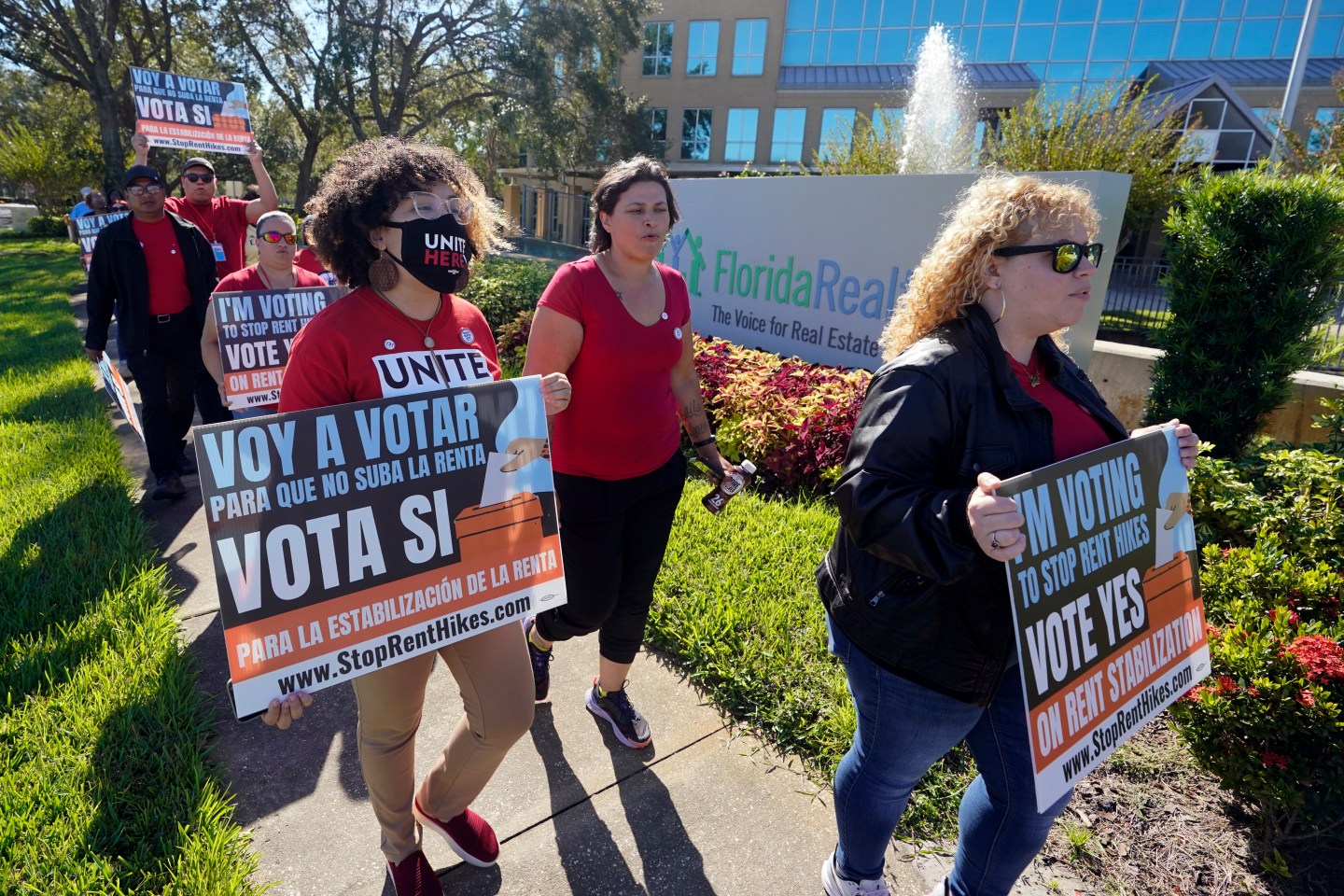 Ballot measures in the U.S. to build more affordable housing and protect tenants from soaring rent increases were plentiful and fared well in last week’s midterm elections, a sign of growing angst over record high rents exacerbated by inflation and a dearth of homes.

Voters approved capping rent increases at below inflation in three U.S. cities: Portland, Maine, and Richmond and Santa Monica in California. Another measure was leading in the vote count in Pasadena outside of Los Angeles. In Florida, voters in Orange County, which includes Orlando, overwhelmingly passed a rent stabilization measure but a court ruling means it’s unlikely to go into force.

There were also dozens of proposals on the Nov. 8 ballot raising money for and authorizing construction of affordable housing, said Diane Yentel, president and CEO of the National Low Income Housing Coalition. Many passed.

“Housing is a winning campaign issue. It’s one that voters show up for and it’s one that should cause policymakers at all levels to act,” said Yentel, adding that even a loss can be a win.

Calls for more affordable homes and policies to keep tenants housed have been growing as homelessness increases even in places outside coastal urban centers such as San Francisco and Los Angeles. Moreover, teachers, police and other public servants say they cannot afford to live in the places where they work, resulting in nightmare commutes and staffing shortages.

Backers say rent control policies are needed to curb sharp increases that put tenants at risk of eviction. They say protections are especially needed now as more corporations snap up rental housing for profit. As of 2018, the U.S. Census Bureau found businesses owned nearly half of rental units.

“The market is out of whack, the government needs to step in and regulate it so there can be stability,” said Leah Simon-Weisberg, a tenants rights attorney and chair of the rent board in Berkeley, California.

Opponents say rent control increases costs for landlords, the majority of whom are mom-and-pop operations with a handful of units each. Restricting rents will spur disinvestment in rental stock and discourage construction of affordable housing.

“Decades of empirical research have shown this policy does not help the underlying cause of the housing shortage that we have now. If anything, it makes the housing challenge more acute,” said Ben Harrold, public policy manager at the National Apartment Association.

Most states preempt cities and counties from enacting rent stabilization, the result of lobbying by the real estate industry in the 1970s. Still, in cities accustomed to rent regulation voters approved stronger rent caps and more tenant protections.

The California cities of Richmond and Santa Monica easily approved measures to tighten existing rent increase maximums to 3%, significantly less than the state cap of 10%. In Oakland, across the bay from San Francisco, voters expanded eviction protections for tenants.

In Portland, Maine, 55% of voters approved a measure to slim down an existing rent cap, from 100% of the consumer price index to 70%. The proposal also dictates a host of other tenant protections, such as limiting security deposits to one month’s rent and requiring 90 days notice for a rent increase or lease termination.

A ballot measure in Pasadena to cap annual rent increases at 75% of the consumer price index had more than 52% of the vote late Tuesday, and the campaign declared victory. The campaign’s finance coordinator, Ryan Bell, said organizers went all out to reach voters but also, the timing was right.

“The pandemic really made it clear that people who are renting their housing are insecure by definition. Their housing could be taken away from them in some cities for no cause and a massive rent increase is functionally an eviction,” he said. “There’s just more and more stories.”

Meanwhile, the rent cap overwhelmingly approved by voters in Orange County, Florida, is on hold. A court ruled it didn’t meet what it acknowledged was an “extremely high bar” set by a state law that requires a housing emergency be identified before a rent cap can be put in place.

Nearly 60% of voters approved the measure after rents that jumped 25% between 2020 and 2021 and another double-digit increase this year. The Board of County Commissioners in Orange was scheduled to meet Thursday to decide whether to appeal.

Tenant advocates and landlords do agree on the need for more affordable housing, and cities and counties in Arizona, Maryland, Missouri, North Carolina, Texas and Ohio were among those that approved bond measures for more units, according to the National Low Income Housing Coalition.

In Colorado, voters approved a sweeping measure to set aside roughly $300 million a year for programs that curb homelessness and promote affordable housing. But in Denver, where Zillow data shows median rental prices jumped $600 in two years, 58% of voters rejected a $12 million proposal to expand free legal counsel for all tenants facing eviction.

The eviction fund would have been financed by a $75 annual fee on landlords.

For Drew Hamrick, vice president of government affairs for the Apartment Association of Metro Denver, the opposing argument “that resonated the most was that this $12 million tax was going to end up being paid for by the consumer regardless of what political outlook you have.”