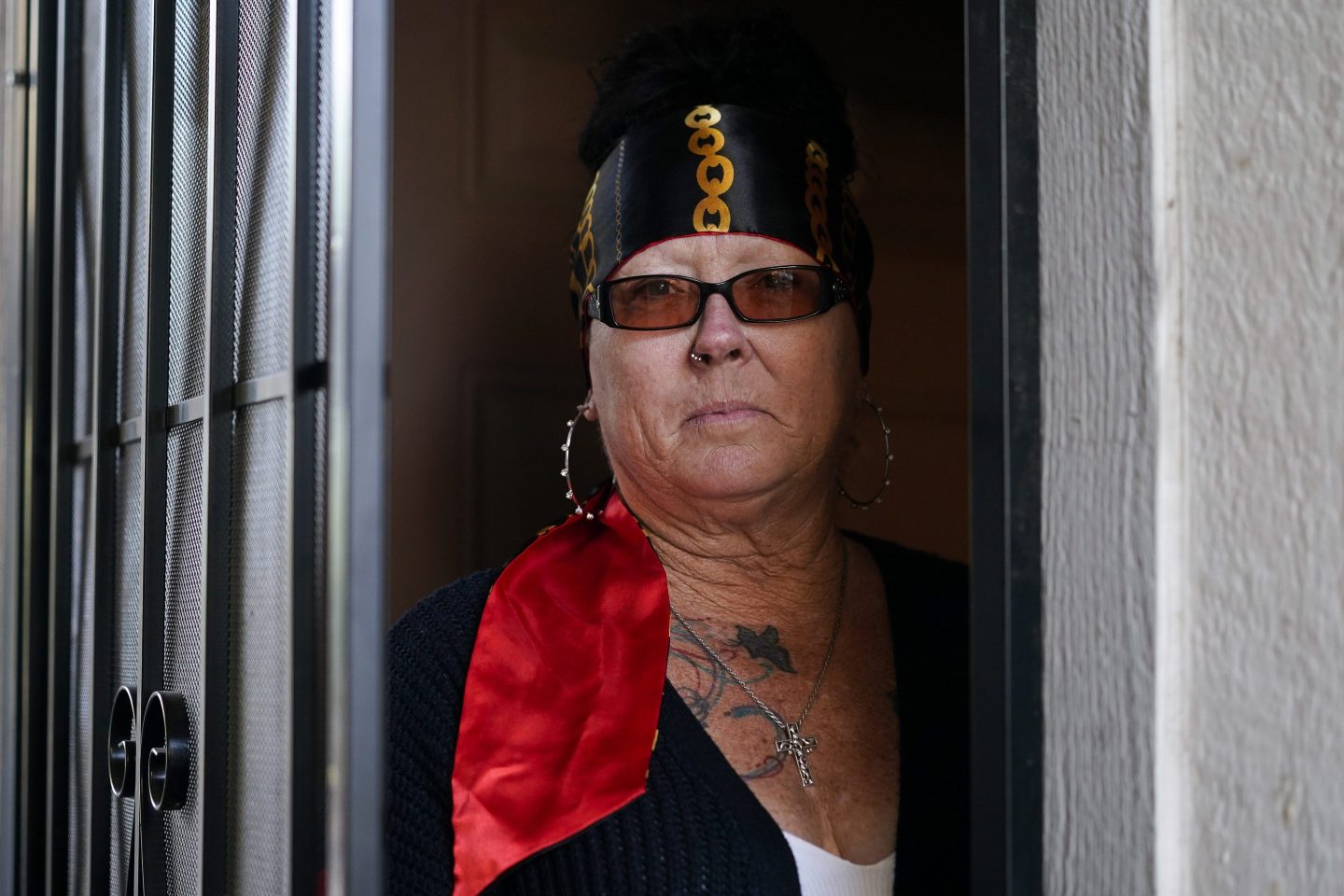 Tenants in California like Kim Carlson (above) are fed up with bad landlords.
Godofredo A. Vásquez—AP photo

Her property manager is verbally abusive and calls her 9-year-old grandson, who has autism, a slur word, she said. Her heater was busted for a month this winter and the dishwasher has mold growing under it. But the final straw came in May: a $500 rent increase, bringing the rent on the two-bedroom to $1,854 a month.

Carlson and other tenants hit with similarly high increases converged on Antioch’s City Hall for marathon hearings, pleading for protection. In September, the City Council on a 3-2 vote approved a 3% cap on annual increases.

Carlson, who is disabled and under treatment for lymphoma cancer, starts to weep imagining what her life could be like.

“Just normality, just freedom, just being able to walk outside and breathe and not have to walk outside and wonder what is going to happen next,” said Carlson, 54, who lives with her daughter and two grandsons at the Delta Pines apartment complex. “You know, for the kids to feel safe. My babies don’t feel safe.”

Despite a landmark renter protection law approved by California legislators in 2019, tenants across the country’s most populous state are taking to ballot boxes and city councils to demand even more safeguards. They want to crack down on tenant harassment, shoddy living conditions and unresponsive landlords that are usually faceless corporations.

Elected officials, for their part, appear more willing than in years past to regulate what is a private contract between landlord and tenant. In addition to Antioch, city councils in Bell Gardens, Pomona, Oxnard and Oakland all lowered maximum rent increases this year as inflation hit a 40-year high. Other city councils put the issue on the Nov. 8 ballot.

Leah Simon-Weisberg, legal director for the advocacy group Alliance of Californians for Community Empowerment, says local officials can no longer pretend supply and demand works when so many families are facing homelessness. In June, 1.3 million California households reported being behind on rent, according to the U.S. Census Bureau.

The situation in working-class Antioch — where more than half the population is Black or Latino — illustrates how tenuous even a win for tenants can be.

The two council members who voted in favor of rent stabilization are up for re-election Tuesday, with one of them, Tamisha Torres-Walker, facing a former council member she narrowly beat two years ago. The local newspaper endorsed Joy Motts and called Torres-Walker, who was homeless as a young adult, polarizing.

Mayor Lamar Thorpe, who provided the third vote, faces sexual harassment allegations by two women, which he denies. They are part of a progressive Black majority.

If either member loses her seat, the rent ordinance could be repealed.

The two council members who voted no are both in the real estate industry, and not up for re-election.

A once largely white suburb, Antioch has become more politically liberal as Black, Latino and low-income residents forced out of San Francisco and Oakland moved in. Advocates tried for years to mobilize tenants, but it took the shockingly high rent-hike notices and the expiration of a statewide eviction moratorium in June to get movement.

Outraged tenants jammed into council chambers describing refrigerators pieced from spare parts and washing machines that reeked of rotten eggs. They spoke of skipping meals, working multiple jobs and living in constant terror of becoming homeless, sleeping in their car and washing their children with bottled water.

“We saw a lot of fear, a lot of desperation,” said Rhea Laughlin, an organizer with First 5 Contra Costa, a county initiative that focuses on early childhood. But, she said, she also saw people summon the courage “to go before council, to rally, to march, to speak to the press and be exposed in a way that I think tenants were too afraid to do before, but now really felt they had little to lose.”

Teresa Farias, 36, said she was terrified to speak in public but she was even more afraid that she, her husband and their three children, ages 3 to 14, would have to leave their home. When the family received a $361 rent increase notice in May, she called the East County Regional Group, a parent advocacy organization supported by First 5. They told her to start knocking on doors and talk to her neighbors.

California’s tenant protection law limits rent increases to a maximum 10% a year. But many types of housing are exempt, including low-income complexes funded by government tax credits and increasingly owned by corporations, limited liability companies or limited partnerships.

The rent increases never took effect, rescinded by the landlord as the City Council moved toward approving rent stabilization. Levy did not respond to emails seeking comment.

Council member Michael Barbanica, who owns a real estate and property management company, called the rent hikes outrageous, but said the city could have worked with the district attorney’s office to prosecute price-gouging corporate landlords.

Instead, the rent cap penalizes all local landlords, some of whom are now planning to sell, he said.

But, Carlson said, the city needs to pass even more tenant protections. The apartment complex is infested with roaches and her neighbors are too scared to speak up, she said.

Her apartment has flooded at least seven times in the eight years she’s lived there, she said, flipping through cellphone photos of her toilet and bathtub filled with dark yellow-brown water. In October 2020, she slipped from water pouring down from the upstairs apartment and dislocated her hip.

She has never been compensated, including all the gifts lost when the apartment flooded with water on Christmas Eve 2017. Two months later, in February 2018, feces and urine bubbled from the tub and toilets.

“We got two five-gallon buckets and a bag of plastic bags brought to us and we had to (urinate and defecate) in those buckets for five days because the toilets were blown off the floor,” Carlson said.

The toilets still gurgle, indicating blockage. That’s when she shuts off the water and waits for plumbers to clear the backup.

Tenant organizer Devin Williams grew up in Antioch after his parents moved out of San Francisco in 2003, part of a migration of Black residents leaving city centers for cheaper homes in safer suburbs. The 32-year-old is devastated that the same opportunity is not available to tenants like Carlson now.

“People have a responsibility to make sure people have habitable living conditions,” he said. “And their lives are just being exploited because people want to make money.”