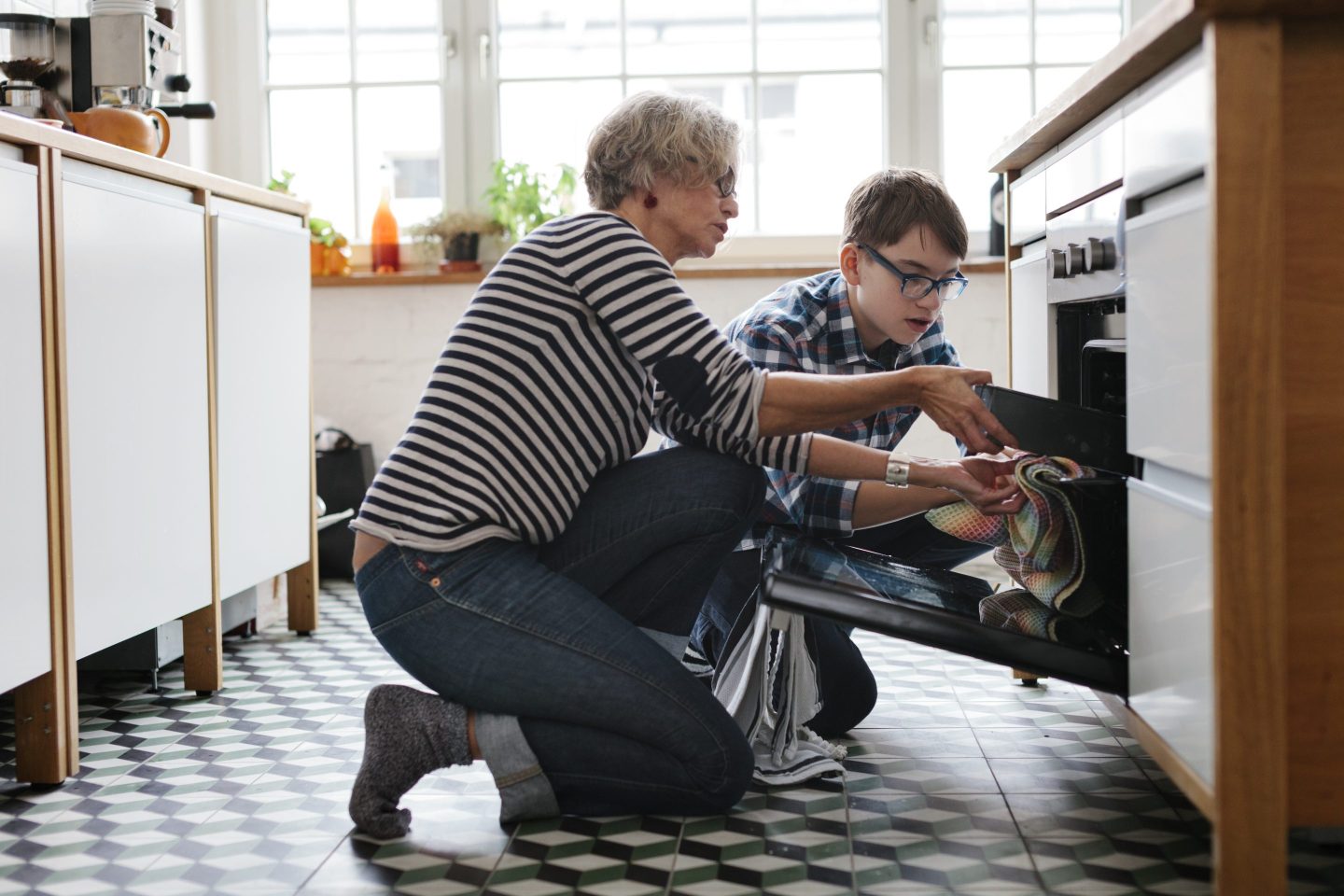 Women's unpaid labor can help offset an economic crisis. But it also contributes to the gender wage gap.
Getty Images

Paula Newbaker, 64, knew she might need to take a pay cut when she left her long career in public relations in Washington D.C. to care for her 91 year-old mother with dementia outside of Pittsburgh. But she didn’t expect it to be so dramatic.

“There aren’t a hell of a lot of PR jobs in Pittsburgh,” she explains. This was 2017, well before the COVID remote-work boom. Newbaker found the jobs she applied for usually went to locals who knew the area well. The only work she was able to secure was part-time, temporary, or freelance, which paid around $15 an hour.

Since her move, Newbaker has spent the bulk of her days caring for her mother, making meals, moving her from her bed, assisting with hygiene, and taking her to doctor appointments. As her mother’s health declined further, her caregiving responsibilities grew overwhelming. “I have not had time to think of myself, so no job,” she wrote in an email.

Newbaker is one of over 6 million Americans cutting back their paid work in order to care for an aged or disabled loved one, and some studies show that with an aging population, that number will continue to grow. She estimates that she has lost over $500,000 in five years in wages and benefits, compared to her previous earnings. Though she manages to pick up some paid work part-time, the unpaid work is never ending. Newbaker feels she is working all the time without a break. Those days when she had no caregiving responsibilities and could work a full-time job were easier, she says, than her days are now.

The unpaid labor millions of American women like Newbaker do every day is one of the major drivers bringing down a woman’s earnings. Women are paid 83 cents for every dollar a man makes. The Institute for Women’s Policy Research shows that gap is even wider for some women—58 cents per dollar for mothers, and even less for women of color.

Our economy depends on unpaid labor to fuel the rest of our economic output, and the division of all the work at home is far from fair. Women do at least two and a half times more unpaid labor than men. Though unpaid labor is the largest sector of the economy, it is currently left out of the national tallying of Gross Domestic Product, a measurement used to understand a nation’s overall economic health.

Many women find themselves in Newbaker’s position: doing more unpaid labor means taking a cut in their paid work. It’s the laws of physics, explains Misty Heggeness, an associate professor of public affairs at the University of Kansas and former principal economist and senior advisor at the U.S. Census. “No one has more than 24 hours in a day. If your work increases in one area then it is going to have to decrease in another,” she says.

“A lot of the data shows that men and women are relatively equal early on in their careers outside of the home. And then as women start to have children, you start to see a gap in earnings,” she continues. “A lot of that is due to this idea that in order to advance in your career you really need to be able to really focus predominantly on your job.”

Dads receive a “fatherhood bonus” in terms of wage increase—they are seen as more dedicated to their work and have a stronger identity as a breadwinner. Meanwhile women’s wages face a “motherhood penalty,” and the assumption that their focus is their children, not work. The motherhood penalty increases with each subsequent child. And in straight relationships, if the woman is earning lower wages than her partner, when someone needs to step into a full-time caregiving role, it often defaults to the mother.

In recent years, during a global pandemic that closed schools, that trend has only intensified. But raising children isn’t the only form of unpaid labor keeping women from reaching their full income potential. Many drop out of—or pull back from the workforce—to care for aging parents. It’s a crisis that is expected to increase as baby boomers age and there are not enough caregivers to care for them.

Unpaid labor is often measured using a metric called “household production, “a term that dates back to the creation of GDP in the 1930s, but it wasn’t until the year 2000 that a team of economists at the Bureau of Economic Analysis began formally measuring it regularly by studying the American Time Use Research. Since the 1960s, household production relative to GDP has been declining, largely due to the mechanization of some of our housework, and the willingness of Americans to outsource that work, including eating more food prepared outside the home or hiring someone else to clean. This trend continued during recessions as well.

But during the pandemic, this trend shifted. More unpaid work was happening, and this increase in unpaid work actually made the overall economic recession less severe. A recent study from the Bureau of Economic Advisors found that the 2020 recession was less severe because the uptick in unpaid labor “provided a partial buffer…reducing but not eliminating the decline in economic activity.” It was women, notably, who moved from employment (collecting a paycheck) to unemployment (Zoom school monitoring).

“There was a lot more activity done inside the house that had previously been done outside the house,” explains Benjamin Bridgman, lead author of the study and assistant chief economist at BEA. Cooking, childcare, educating school-aged kids: things that had previously been outsourced were now being done at home. The increase in unpaid labor was providing a “a partial buffer to the COVID-19 recession,” by reducing the decline in economic activity. Those maddening hours of virtual school were worth something! Unfortunately, no one got an actual paycheck for helping their kids survive Zoom math.

“Historically in the U.S. our politicians have really struggled to acknowledge and value unpaid care work in any meaningful way,” says Heggeness. And she argues that paying Americans for this labor—through child tax credits, elderly parent tax credits, etc—could make a difference, providing resources and payments to people who are engaged in unpaid work caring for children and the elderly.

“There is a way in which policy can be developed that could reimburse people for this work,” Heggeness says.

When given the opportunity to include investments in home care, childcare, and an expanded child tax credit in the Biden administration’s budget reconciliation plan this past year, Congress took a pass, focusing instead on climate and tax reform.

“We still have this ‘bootstraps’ mentality,” says Heggeness. “The fact that we have for so long let this mentality fester has really been to our own detriment. It really cripples our ability to accelerate GDP and to invest in our next generation.”

Rebecca Gale is a reporting fellow at the Better Life Lab at New America, which provided support for this article. Follow her @beckgale.