Black women and the glass cliff: ‘I was supposed to bring some kind of Black Girl Magic’ 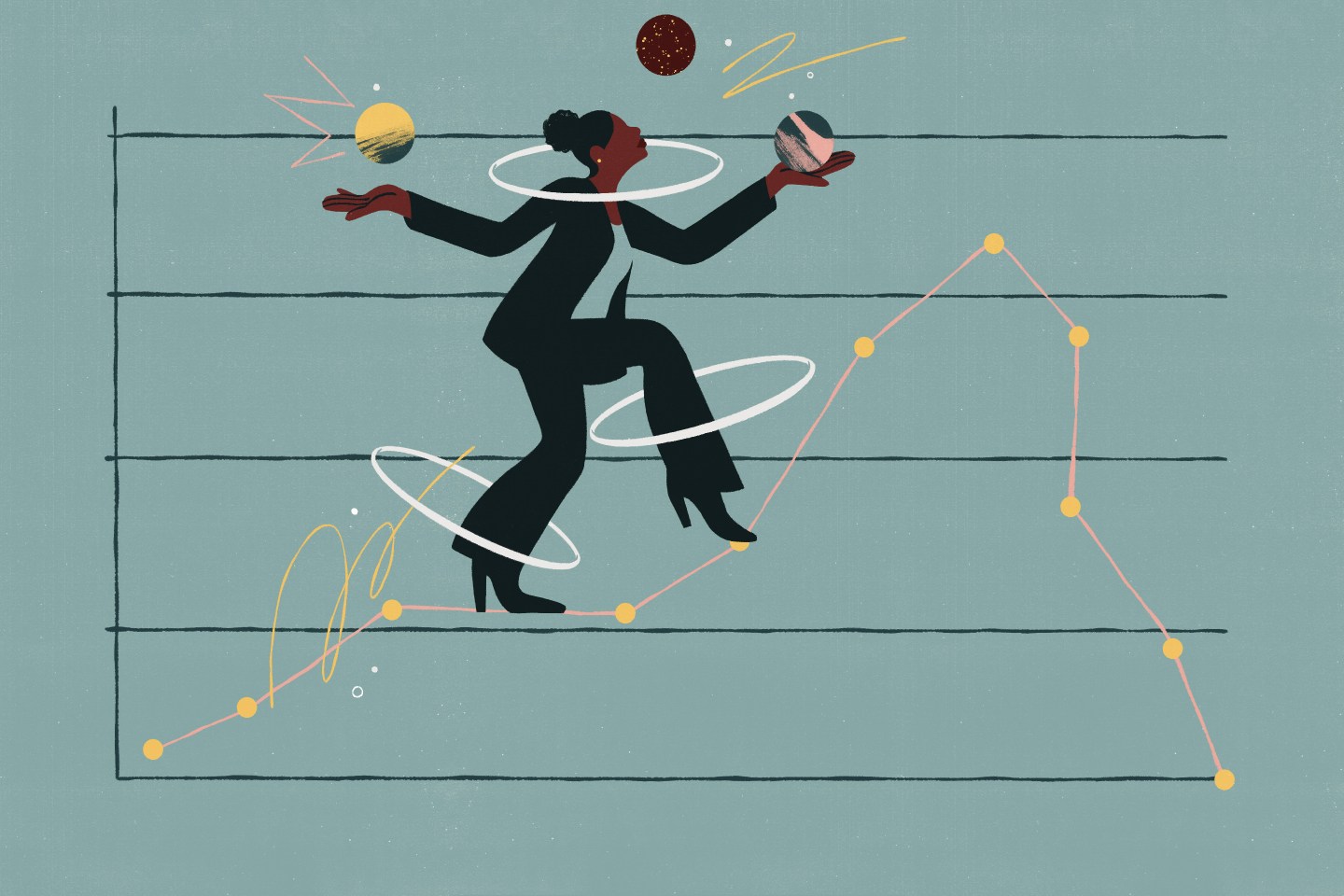 In 2009, Minda Harts was promoted into a senior-level role in fundraising at a university. It felt like a big accomplishment, and she was eager to leave her mark. Only Harts wasn’t aware how much work she’d need to do to clean up a department that was already in shambles. Two years later, she quit.

“I was supposed to bring some Black Girl Magic and that was unfair to me because I was really excited about this opportunity,” says Harts, who has since built a successful career as an author, speaker, and workplace and equity consultant. “But once I found out what it really entailed, I realized it was a battle I was not going to win.”

Harts’ experience, which she documents in her bestselling books, The Memo and Right Within, is part of the phenomenon known in some circles as the glass cliff, wherein women, specifically those from underrepresented communities, are promoted into leadership positions during times of crisis and given a sometimes impossible task of fixing a broken culture. It’s similar to its cousin, the glass ceiling, a tired metaphor used to describe the invisible barrier women frequently hit when climbing the corporate ranks.

Following the murder of George Floyd in the summer of 2020, many companies scrambled to diversify their workforces and as a result, a number of Black women were promoted into high-profile roles. Two years later, some of these women have moved onto other jobs.

One need look no further than the push to diversify in media for a wealth of examples. In July 2020, Lisa Lucas was tapped to be the publisher at Pantheon, an imprint at Penguin Random House. Meanwhile, at Simon & Schuster, Dana Canedy was hired as the senior vice president and publisher. Both were the first Black publishers to lead the nearly 100-year-old companies. In August of that same summer, Dawn Davis took over as editor in chief of Bon Appetit and the following February, Rashida Jones became the president of MSNBC, the first Black woman to run a cable news channel.

Two years to the date, however, Canedy stepped down from her role to focus on her writing. She isn’t the only one to step away from the glass cliff. Refinery 29’s global editor-in-chief Simone Oliver also left two years into her role to “pursue other opportunities,” a Vice Media Group spokesperson told Digiday in July 2022. This fall, she started a new role as senior vice president, digital content at BET.

When Oliver joined Refinery29 in September 2020, it was three months after the publication’s co-founder and global editor-in-chief Christene Barberich had resigned amid public outcry from employees about workplace discrimination and lack of racial diversity. In a now-deleted Instagram post, Barberich wrote: “I’ve read and taken in the raw and personal accounts of Black women and women of color regarding their experiences inside our company at Refinery29 … I will be stepping aside in my role at R29 to help diversify our leadership in editorial and ensure this brand and the people it touches can spark a new defining chapter.”

Oliver is a classic example of a Black woman being called in to clean up a mess she didn’t create. When she joined Refinery29, it was less than a year after it had been acquired by Vice Media Group. The once high-flying women’s media site had been through three rounds of layoffs in as many years. Oliver did not respond to our request to be interviewed for this story.

“It’s not equitable to put Black women in positions where they’re not being supported,” says Harts. “It’s unfortunate that a lot of us are put in positions to turn water into wine.”

While businesses have become more cognizant of the need for diversity in leadership since the “racial reckoning” of 2020, many are also expecting immediate results, which is a recipe for disaster, says Kyra Kyles, CEO of YR Media, a national youth-led media nonprofit based out of Oakland, Calif.

“You’re not just tackling a business need, you’re also being asked to tackle and transform culture,” she says. “You’re already coming in at somewhat of a deficit because you’re coming in at a tumultuous time for all organizations and media in particular, and on top of that, the expectations are often highly unrealistic.”

Carrying the weight of the world on our shoulders

In Shonda Rhimes’ New York Times bestselling memoir, Year of Yes, the showrunner talks about the pressures she felt being what she calls an F.O.D., “First Only Different.” “When you are an F.O.D.,” she writes, “you are saddled with that burden of extra responsibility—whether you want it or not.”

“I don’t think anyone should have to think that,” Kyles says of the double standard and high expectations facing Black women. “Why can’t Stacey Abrams just run for public office? She’s got to run for public office, change perceptions and stereotypes, and fix a broken voter suppression system all at the same time. That’s not something that would be asked of her counterpart.”

Being the first comes with tremendous pressure to get it right and perform perfection at all times no matter what.

Instead, Black women need the same room to fail–and grace to rebound–as their white male counterparts. Just look at WeWork founder Adam Neumann’s $350 million comeback, which has been described as a “slap in the face” to female founders and founders of color, seeing as the amount is more than the “$324 million raised by all U.S. Black-founded startups combined in the second quarter of this year.”

“We have to be given the same opportunities and chances as our white male counterparts across corporate America,” says Kyles. “A lot of times you’ll see serial leaders or entrepreneurs who do something, and it may not go perfectly, but they’re still allowed to fight another day, try something else, and go into a different industry. Meanwhile, if we do that, it’s painted as a failure, and it paints a negative picture for the person coming behind us.”

That is, if a Black woman even gets a chance to step into a leadership role in the first place. According to a report on The State of Black Women in Corporate America, “49% of Black women feel that their race or ethnicity will make it harder for them to get a raise, promotion, or chance to get ahead.” There are just two Black women leading Fortune 500 companies. With so few opportunities, it makes it that much harder for Black women to say no, even if they are walking into an impossible situation.

Setting Black women up for success

To help combat the glass cliff facing Black women leaders, Kyles argues we shouldn’t only be brought into leadership roles in times of crisis. There also needs to be “real intentionality” and “fair parameters” in place.

“We should be brought in when things are going well, so that we can take it to the next level,” she says. “When you’re spending time doing cleanup, you can’t grow. But you have investors and advertisers who are expecting growth. They’re not recognizing that you were brought in literally to clean up someone else’s mess.”

Harts also believes more transparency about what’s involved in a role could go a long way toward increasing recruitment and retention.

“Oftentimes when we’re hired, we’re not given the full breadth and scope of what’s really required to be successful in a role,” she says. “It’s not enough to just put a Black woman in a position if she’s not supported in resources, dollars, and sponsorships. These tools must be available to her so she can be successful.”

Equally important is having adequate resources, whether it’s an actual budget to create and run a team, hire an executive coach, or pursue professional development opportunities, not to mention mental and emotional support.

“When we’ve finally reached that rung on the ladder, we ask ourselves, Is it really worth it?” Harts says of the workplace trauma and microaggressions Black women endure as they advance in their careers. “Then we start to center our own mental health and make decisions about the correct seat for us at this time in our life.”

Indeed, the Strong Black Woman trope, “a perception that Black women are naturally strong, resilient, self-contained, and self-sacrificing,” as named in a 2014 study, is detrimental to our mental health. The study revealed that steadfast endorsement of this trope among Black women has been shown to “increase the relationship between stress and depressive symptoms.” Additionally, the pressure to be perceived as perfect and “have it all together,” can lead many Black women in leadership positions to put themselves and their well-being on the bottom of their already lengthy to-do lists.

“It’s because Black women are powerful, we are known as strong. We are given all sorts of superhuman qualities, but none of the superhuman support that should come with that,” says Kyles. “We need to be able to say, ‘Hey, I need a break,’ instead of being asked to come in and work miracles and do it without any form of complaint. That’s an unrealistic expectation to place on anyone and especially women of color.”

At the end of the day, if the position you’re in is no longer serving you, it may be time to step away without shame. “The issue when you’re ‘the first’ or ‘the only,’ is that to many, you represent an entire industry,” Canedy told the New York Times in July. “And I embrace that. However, it made it harder to make a decision that I felt was right for me.”

“We’ve been conditioned to not rock the boat and just be thankful for what we get. We have to unlearn that and ask ourselves, ‘What is it that I wish I had in my past experiences? Is this the right seat for me?’” suggests Harts. “I think we’re in a position right now, for Black women in particular, where we realize we do have options and we don’t have to make everything work. We can actually go places where we can thrive and feel supported.”