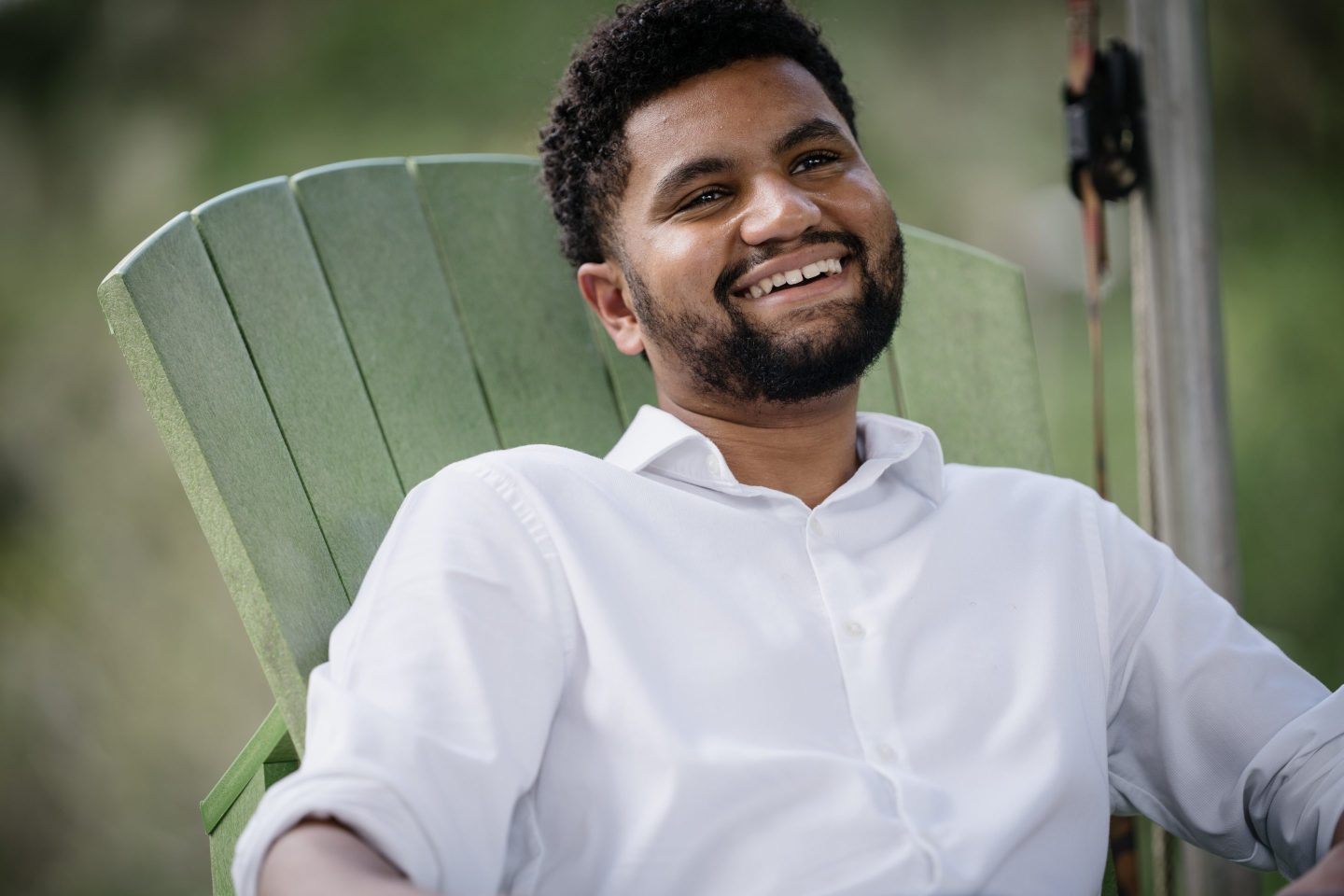 “I intend on finishing my degree while I’m in Congress,” Frost, the Gen Zer running for Val Demings’s seat, revealed in an exclusive interview.
The Washington Post/Getty Images

On a Monday in September, 43 days before Election Day, Maxwell Frost showed up to our Zoom interview 10 minutes late.

That shouldn’t have been surprising, considering he had a full day of back-to-back meetings: a Zoom gathering for Democrats Abroad; chats with two Orlando activists; a meeting with a local union; and, before his 5 p.m. interview with Fortune, a few hours of “call time,” during which he personally called some of his 40,000-plus donors.

“Not everyone’s getting a call, but we’re doing as many as we can for people who chipped in,” Frost says.

While his schedule screams “politician on the campaign trail,” Frost is nothing like a typical congressional candidate. For one thing, he’s Afro-Cuban. For another, he’s 25. There’s never been an Afro-Cuban congressman, and Madison Cawthorn (R-N.C.) is currently the youngest member of Congress at 27.

As a Gen Zer, he’s up on pop culture (he went as Greta Gerwig for Halloween) and depends on the gig economy to make ends meet, working part-time as an Uber driver. If Frost is elected next week—and he’s confident he will be—he’ll be the first Gen Z member of Congress.

But don’t get it twisted. Frost sounds every bit the part of a congressman, speaking with the practiced diplomacy of a politician decades older. Though he kept his camera off during our interview, I heard in the background what sounded like the opening and closing of kitchen cabinets and the turning on and off of a faucet (was he doing dishes?).

Despite the domestic clamor, Frost exuded genuine excitement at the prospect of getting elected and using his platform as an opportunity to create a better world for his peers.

The Orlando native is running for Democratic Congresswoman Val Demings’s seat, which she is vacating to challenge Marco Rubio for his seat in the Senate. Frost supports a long list of typical progressive causes: Medicare for All, 100% clean energy, and gun and justice reform—common Gen Z priorities.

“I’m always asked, ‘What does Gen Z care about?’ And I don’t think Gen Z cares about different things than other generations,” he says. “We all want to live in a world where we’re safe and have the resources we need.”

The real difference, he says, is how early Gen Zers were exposed to formative issues. Frost, who was four years old on 9/11, recalls how the Iraq War, Occupy Wall Street, and the fatal shooting of Trayvon Martin (which took place just 30 minutes north of where Frost lives in Orlando) were formative moments for his generation.

“All these different things culminated in [creating] a generation that naturally thinks about each other, and thinking, ‘My success is your success,’” he says. On top of that, though, young people approach issues with “a bit more urgency.” Gen Z, he says, is concerned about moving quickly because “we’re pissed off we weren’t born into a better world.”

That’s a world Frost, who has not graduated college nor ever held public office, is dead set on creating.

Why is Frost running now instead of 10 years from now, perhaps after serving in the state senate or as city comptroller? Bad question, he says.

“That thinking alone is what’s wrong with politics,” he notes. “People say, ‘Run for city council first,’ as a way to get myself to a higher position. I’m not going to use a position as a stepping stone to do something else.”

Fresh out of high school in 2015, Frost joined the Hillary Clinton campaign full-time while taking college classes online at Florida’s Valencia College. He originally thought he’d return to school full-time after Trump’s election, but he got a job on another campaign soon after, followed by several others, which he juggled while working at the national ACLU and March for Our Lives.

He became March for Our Lives’ national organizing director in 2019, a $93,000-a-year job in which he said he led a 25-person staff and managed a multimillion-dollar budget. That left no time for college. Coupled with his parents’ inability to afford tuition for both him and his younger sister, who was about to enroll at the time, he decided to drop out.

During the peak of the Black Lives Matter movement in 2020, some of Frost’s fellow organizers encouraged him to run for Congress. “I had conversations with over 200 people across my community—I know, because I kept an Excel sheet to track each one,” he said.

What cemented the idea for him was speaking on the phone, in June 2021, for the first time with his biological mother; Frost was adopted at birth, and the two had no prior contact. “I learned she didn’t have health care when I was in the womb; I learned about her cycle of poverty in a crime-filled area,” he says. “Her story [reminded me] of my motto, from [philosopher] Cornel West: ‘We’ve got to see the world through the eyes of the most vulnerable.’”

On Aug. 11, 2021, he announced his candidacy. Once his campaign began in earnest, Frost quit his March for Our Lives job, and has since been making ends meet by driving for Uber.

“I just represent a new type of politics,” he told Politico in August 2022. “I come from a different place. I’m not a lawyer. I’m not a millionaire. I’m an organizer.”

A ‘not wealthy guy’

Frost handily won the Democratic primary on Aug. 23, with nearly 35% of the vote. He also outraised his opponents, bringing in over $1.6 million to date, according to his manager. FiveThirtyEight’s election simulation model says, with 99% certainty, he’ll “very likely” win Demings’s seat. And Frost has garnered endorsements from Senators Elizabeth Warren (D-Mass.) and Bernie Sanders (I-Vt.), Rev. Jesse Jackson, the Congressional Progressive Caucus PAC, the AFL-CIO, and the Orlando Sentinel.

Following Frost’s primary win, Sen. Ed Markey (D-Mass.), author of the Green New Deal, tweeted that he was “honored” to support Frost and that “we need to listen to young people and let them lead.”

Rep. David Cicilline (D-R.I.), who has been in Congress for 11 years, told Politico that working in politics, amid “conspiracy theorists and election deniers,” can be hugely discouraging. “You can get down and question, ‘Are we going to get through this?’” said Cicilline, former Providence mayor and the first openly gay mayor of a U.S. state capital. “But then you meet somebody like Maxwell…and it renews your belief in democracy and your hope for the future.”

But making ends meet while running a campaign has proved to be a challenge. Frost, a self-proclaimed “not wealthy guy,” says he emptied out his savings two or three months into his campaign run. He also didn’t have a place of his own to live for a period of time, because his rent went up too much.

Frost is disappointed that he can’t work a second job while serving in Congress, which pays its members an annual salary of $174,000. That squashes his dream of picking up Uber shifts in Orlando while representing its citizens.

Not that he’d be sad to leave the gig economy generally. “It’s something we could do a better job of,” he says. “When gas prices went up, my bottom line [as an Uber driver] was hit a lot, and I worried about my bills and my food.”

Perhaps that’s why Frost defines success as “complete, total fulfillment,” which comes from living a great life and having the means to sustain it. “That’s what makes life worth it,” he says. “We live in a society where the first question people ask is, ‘What do you do for work?’ I want to live in a world where we value our community more.”

Of course, success also means winning the election. Frost has already made plans for his life in D.C. That includes being both a student and a congressman.

“First step is being a really good member of Congress,” he says. “Then I want to figure out ways where I can, little by little, finish up my degree.”

It also includes, later this month, flying up a day before congressional orientation to see pop band the 1975 for its show at the Anthem, a venue in D.C.’s Wharf neighborhood. Frost, a prolific drummer, loves live music.

“I want to tour every single concert venue,” he says. “I’ve played in most of them, and I have opinions.”