Climate change is a financial risk for most companies. At AccuWeather, it’s a financial win: ‘I like snow. It’s good for business,’ says its CEO 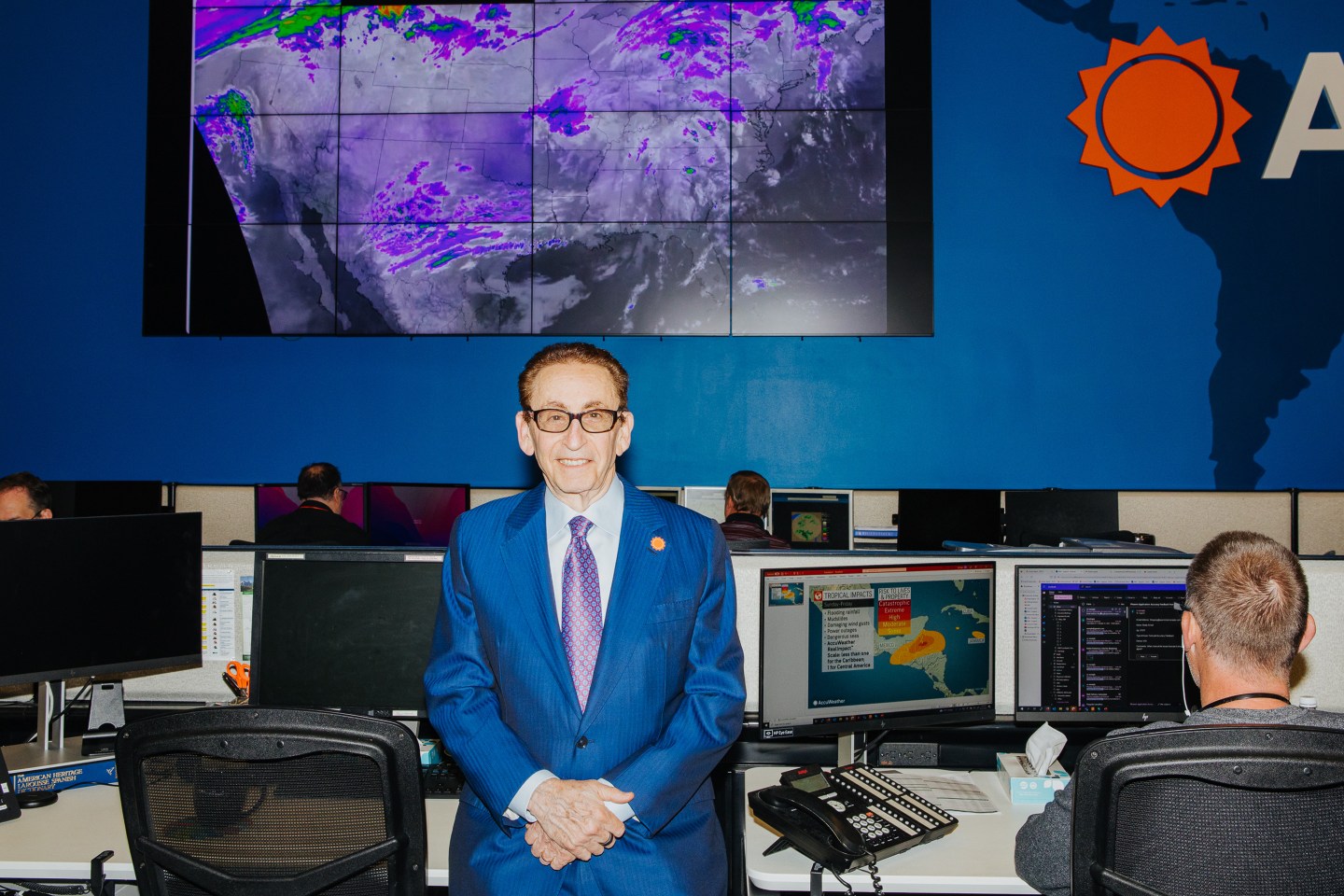 Joel Myers, the founder and CEO of AccuWeather, sits for a portrait on the operations floor at AccuWeather’s headquarters in State College, Pennsylvania on Monday, October 31, 2022.
Michelle Gustafson for Fortune Magazine

In the 60 years since he founded AccuWeather, Joel Myers has lost none of his awe at a good snowstorm or other significant weather events. Now, as extreme weather becomes more common, with wildfires regularly ravaging California, unusually active hurricane seasons, and a deluge of flooding events, many more Americans are similarly captivated by severe weather trends.

Myers, who got his start in meteorology as a 15-year-old giving the National Weather Service snowfall readings from his home, says the financial upside to climate change is that more corporations are paying close attention to the weather.

About half of Fortune 500 companies use its services, he says. LiveNation is among those companies. The events ticketing business uses AccuWeather’s hyper-localized forecasts to determine if and for how long it should delay a rock concert or football game because of a passing thunderstorm. Large retailers use the service to determine which products and how much to stock on their shelves.

“Severe weather has always affected people, but I would say they are more obsessed now,” says the 83-year-old Myers. Today, AccuWeather has 1.5 billion monthly users. But it has a fearsome rival in The Weather Channel, bought by IBM in 2015; not to mention the U.S. government, which provides the raw data that forecasting companies parse, and issues its own forecasts. The privately held company doesn’t disclose financial data, but AccuWeather says it has grown every year except for three since its 1962 founding.

The next frontier in the weather forecast wars is ever-more granular prognostications, down to street-by-street and even minute-by-minute detail. Though Myers says he doesn’t want to get pulled into the political fray of climate change deniers, the meteorologist says the phenomenon is undeniably happening. At the same time, he dislikes overdramatizing weather events, such as The Weather Channel’s practice of naming winter storms in a similar fashion to hurricanes, such as the snowstorm the latter weather service named Kenan, which dumped a foot of snow on New York in January. Such practices, Myers says, sensationalize weather and ultimately hurt business.

“We built trust in the AccuWeather forecast,” Myers says. “You cannot overhype something.”

Fortune: Has climate change been a boon for AccuWeather?

Myers: It’s certainly heightened the interest in weather. Severe weather has always affected people, but I would say they are more obsessed now because there’s more data available. When we started 60 years ago, we were the first to show radars and were told by media partners, ‘Don’t show radars. They’ll confuse the public.’ Of course, everybody looks at the radar now and interprets what it will mean for them. Now you can get more engaged with it and depend on it.

Is it fair to blame the meteorologist when a forecast proves to be wrong?

One of my goals as a teenager was to raise respect for weather forecasters. I had a burning desire to be a weather forecaster and combine it with my entrepreneurial spirit, and I was very frustrated by criticism. As you know, we’ve made tremendous progress in our field. In his book, The Signal and the Noise, Nate Silver studied all types of predictions and found that weather forecasting has made the most progress. We’ve dedicated ourselves to owning the ‘Accu’ in ‘AccuWeather.’

No, not at all. The models are the models, and they go out for 90 days on an hour-by-hour basis. Even if you’re talking about climate change, you’re talking about maybe an average of a degree change in temperature over 30 years. We do see more severe weather now than ever before, but that’s because we have cameras everywhere. You would never capture every tornado 25 or 30 years ago. Now you have storm chasers and zillions of cameras across the country. We capture everything.

Do you agree that climate change is happening?

Of course, it’s happening. Let’s put things in perspective. The Earth’s climate has always been changing, and it’s happening now because of human activity. There’s no question that the CO2 content of the atmosphere has risen in my lifetime. But we’ve got to put the impact in perspective. There won’t be all losers. There’ll be losers and winners around the Earth, which will clearly lead to places that suffer migration.

What are some of the implications?

Based on the climate models of one of our studies, if the high temperature in Phoenix, Arizona, hits 115 Fahrenheit two times in an average year but reaches that temperature 20 times in 2050, it may cause reverse migration in the U.S. from the South to places further north. So there are all kinds of implications, and we do studies for companies looking at that.

What do you make of politicians who deny climate change?

I’m a scientist and a businessman, and I’m not getting into the politics of different people saying different things. I don’t know who’s acknowledging what or not. I can just answer your questions. Now, I’m a meteorologist, not a climatologist. I see many people today, professionals included, who immediately think they’re experts in all fields. I’m a meteorologist. I’m not a climate expert. The earth is clearly changing due to human activity, but does that mean every severe storm and every warm winter is due to climate change? Some of our competitors try to get attention by dramatizing everything, and it ultimately causes them to lose credibility.

So what do you think of Weather.com’s practice of naming winter storms like the government names hurricanes?

We considered naming winter storms several times in our history long before anybody else did. But we decided not to because a hurricane is a particular entity. It has an eye. It has a path. You can follow it. But a winter storm evolves. You can have a low pressure coming across the Great Lakes, and suddenly it starts weakening, and a secondary one takes over off the Delaware coast. So where’s that storm’s center? In a place like New York City, you can get slush in one place, compared to 10 inches elsewhere. That’s the problem, and we decided not to do it for logical purity. We built trust in the AccuWeather forecast, which is very important to me and everybody here. You cannot overhype something. If you overhype it, the next time a storm comes, there is a threat to your life and limb.

Do you take requests? If I ask you for a snowstorm on December 24, can you conjure one up?

No. As I said, trust is important, and I wouldn’t sell something I couldn’t deliver. But I like snow. It’s good for business.

What fascinates you most in your field?

The scientific advances in forecasting. The success of any company depends on being able to look ahead, anticipate, and pivot—that’s part of what we’re selling to companies. Many don’t realize their reputational exposure if they’re not using us.

Get to know Myers: