The pandemic killed watercooler moments. Apple, Netflix, and Uber’s watercooler company came back stronger than ever 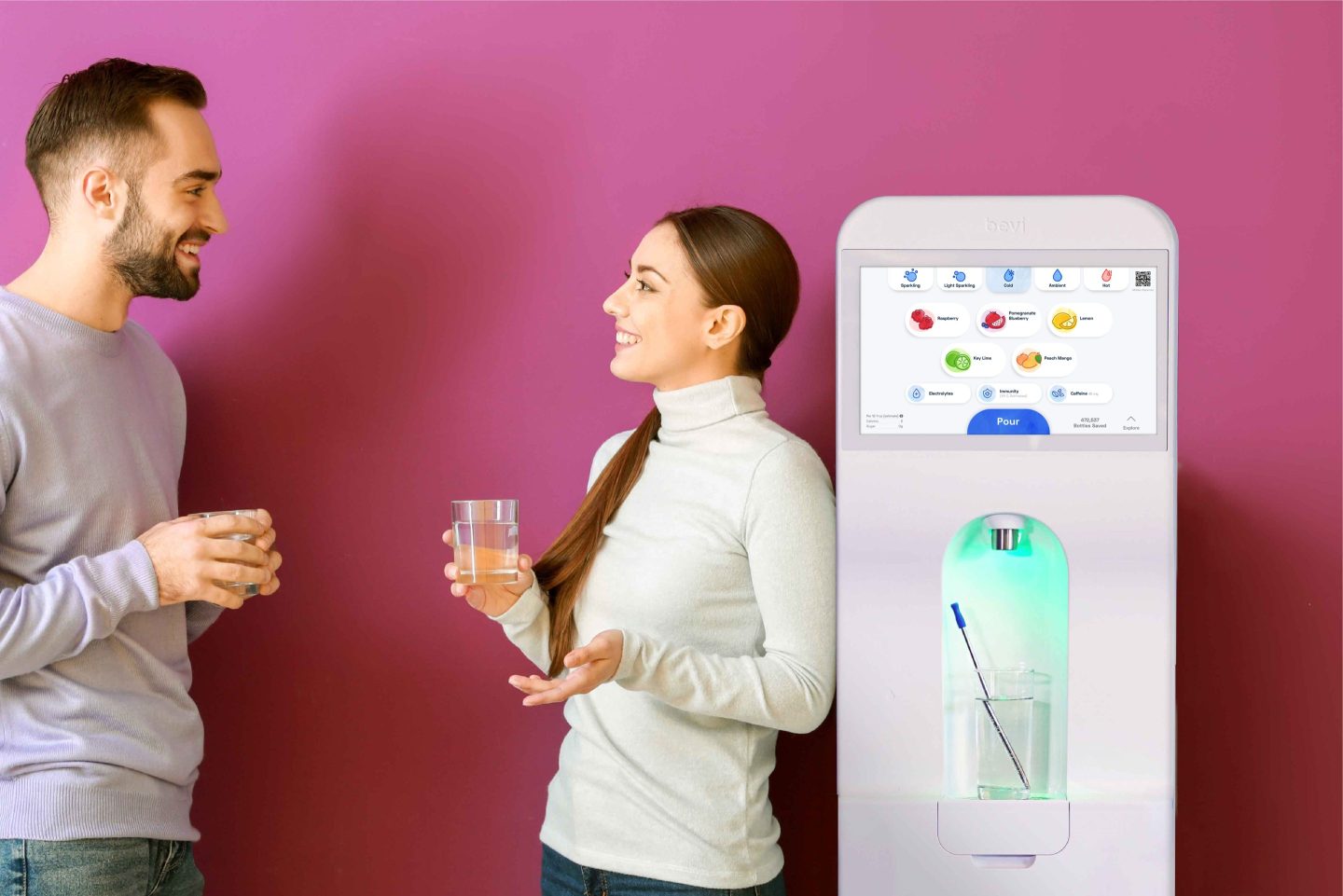 It's water, but cooler.
Courtesy Bevi

The rise of the remote-friendly workplace has chief executives sweating over watercooler moments, the proverbial “casual collisions” between workers that are said to inspire creativity and collaboration.

Believe what you will about whether these serendipitous exchanges are real, can happen virtually, or are valuable to innovation; the fact is that plenty of business leaders fear a future without them.

So, too, do office watercooler companies.

Take Bevi, the Boston-based smart water dispenser company. Its vending machines connect to a building’s water source, offering office workers free, filtered H2O that can be sparkling or flat, plain or flavored, or any combination of the above. Since its 2013 launch, Bevi has won clients like Apple, Netflix, Uber, and Bank of America. Among Fortune 500 companies, 25% have at least one Bevi in the office, says CEO and cofounder Sean Grundy. “Probably all of the apps on your phone, as well as the phone makers, are our customers.”

Bevi was in hyper-growth mode in the years leading up to the pandemic. When COVID arrived, workers dispersed, and office social hubs went fully digital, leaving watercoolers unplugged and abandoned. At Bevi, things got “scary,” Grundy says.

The pandemic tested every company’s agility, but much was at stake for the watercooler maker. Industry-wide shutdowns presented a conundrum: If Bevi employees were productive, collaborative, and inventive without in-person watercooler chatter, would the company inadvertently make the case against its own product?

How Bevi found its market

Three friends cofounded Bevi after one, Eliza Becton, an industrial design graduate, came up with the idea. She tapped Grundy and cofounder Frank Lee, who brought the manufacturing smarts. The trio weren’t looking to disrupt the traditional big-jug water dispenser industry. Instead, they saw a way to deliver a piped-in version of La Croix or San Pellegrino without the wasteful materials, energy, and transportation costs required to keep fridges stocked with cans and bottles.

The company’s mission resonated with investors. By early 2020, it had raised $90 million in three funding rounds while building a list of 3,000 corporate clients.

In March of that year, the Bevi board gathered to brainstorm hiring acceleration plans to aid expansion efforts. The company had 175 employees at the time—not enough to match its ambitions. Grundy recalls the executive team briefly mentioning the pandemic: “Hey, we may want to be prepared to slow down for a couple of weeks if COVID turns out to be a factor here.” Two weeks later, the board met again in a transformed world. More than 90% of Bevi’s business came from customers whose offices were now closed indefinitely.

Most longtime clients held on to their Bevi machines but paused their flavor mix-in and service subscriptions. New clients, however, canceled their freshly signed contracts, and companies that had been close to signing a deal went silent. The sales team pushed on, calling new, often incredulous prospects, Grundy says: “Some of them would respond with, ‘Are you guys serious?’”

With millions of office employees in North America still logging on from home, it became clear that the company needed to cut costs to break even. Bevi’s field technicians, who repaired broken machines and refilled flavors, were among the first to be let go, along with some of the sales and marketing staff. When Bevi conducted another round of layoffs just months later, there was no talk of staying nimble, Grundy says. That would have been pure hubris.

With the staff halved, morale sank. But it wasn’t just layoffs that fed into the malaise. “As a startup, when you’re not growing, you’re losing,” Grundy says. And no one liked that feeling either.

Origins of the watercooler metaphor

In the summer of 2020, a cottage industry of management experts sprung up with forecasts about the future of work. How long before U.S. companies lost their inventiveness? How do corporations maintain a culture of experimentation and harness the alchemy that leads to breakthroughs when everyone is on Zoom? “Whither the watercooler moments?” they asked.

The literal watercoolers that sparked this widely used trope are, of course, the freestanding types that dispense water with the help of gravity and a spout. Although they’re not as common in today’s office, they became a staple in the 1980s after plastic jugs—lighter and safer to transport—replaced the original glass vessels.

As it happens, the invention of the watercooler is linked to the rise of single-use products writ large. That product category was inspired by the paper Dixie cups that now occasionally accompany watercoolers and once invariably did. They were invented in 1907 by a Boston lawyer concerned about the spread of disease. Emerging science at the time suggested the widespread habit of using communal water cups—sometimes called dippers—at public fountains was not hygienic. Soon, watercoolers with paper cups or cones became ubiquitous.

Watercoolers became the default open-all-day spot where workers could socialize and gossip in safety. One never knew who they’d meet at the watercooler—maybe a CEO encounter or a sales rep who’d casually share customer feedback.

During the 1990s, however, tech companies in California began upping the ante on office perks, setting new expectations for employers looking to attract young, tech-savvy employees. Within a decade, the watercooler appeared quaint next to imported espresso machines, on-tap craft beer, and fridges stocked with juice, soda, and bottled water. The humble watercooler came to represent a symbolic space, but an important one. It was where unfiltered conversations and filtered water led to cross-department fertilization and creative flashes, at least in management lore.

The demand for water never dried up among an increasingly health-conscious population—for better or worse. But the shape of coolers shifted. When climate-conscious millennial employees streamed into the workforce as young graduates, they toted the water bottles that had been their constant companion through college, and disposable cups became contraband. Cue the arrival of plumbed-in dispensers and redesigned jug-style coolers that paired perfectly with tall, reusable bottles. Bevi—with its ever-changing menu of flavors and a touchpad screen that allowed workers to control the fizziness of their drink—arrived in time to make hydration greener and, well, techier.

Bevi found immediate success with startups. When producers at the HBO show Silicon Valley needed a vending machine for a scene, they called Bevi, having spotted the brand in real Bay Area offices. Patricia Nakache, a partner at Trinity Ventures and a Bevi board member, says that before her firm invested in the young company, she worked her backchannels to get unvarnished reviews from Bevi clients. Those customers raved about their machines, which was reassuring, if odd. “The enthusiasm I heard through the phone was way greater than I would have expected for a still and sparkling water dispenser,” she quips.

In those first few months of the pandemic, Bevi’s popularity with end customers gave surviving employees hope. Grundy thought companies would return the machines as they scaled back on real estate. Instead, clients who kept any bit of office space kept their Bevis.

The other source of optimism came from data the machines spit out as offices reopened. In April 2020, Bevi usage hovered at 10% of its pre-pandemic volume. That summer, however, beverage dispensers lit up at pharma and biotech firms, followed by banks. The usage trends skewed more by geographic region after that: Users were trickling back to their desks and filling up on sparkling water in areas where people drove to work. Machines in Los Angeles, for example, showed more activity than those in San Francisco.

Today, the company sees usage sustained at 50% or more of pre-pandemic levels, with the Southeast leading the way. Bevi dispenses about 70% as much water in Atlanta as it did before the pandemic. But in cities like New York and Chicago, workers are only using Bevi about half as much as they did in 2019, according to the company’s data.

Office customers in the financial services and biotech sectors remain the most active water drinkers, with usage rates reaching 62% and 55% of 2019 levels, respectively. Tech workers, ironically, are lagging, rebounding to just 39% of pre-pandemic averages.

Grundy had preserved the engineering and product teams during layoffs, requesting they keep developing Bevi 2.0. That was a shaky wager at the time because it still seemed plausible that office employees would work from home forever. Grundy reasoned that the company would sink anyway if offices didn’t reopen. If they rebounded, Bevi might be the only brand crazy enough to have spent the pandemic designing a better office appliance. It was worth the risk.

Bevi also began diversifying its core clientele, selling to warehouses, gyms, hotels, and apartment buildings. People missed their office Bevi and encouraged their condo buildings to rent the machines for common areas, Grundy says. It became a virtuous cycle; when offices reopened, workers who had encountered a Bevi in their residential building asked their employers to get one. The company also launched three new water enhancements alongside its smaller Bevi 2.0—electrolytes, a natural “immunity” blend, and caffeine—perfectly timed to suit the needs of warehouse workers and other essential employees.

The diversify-or-die imperative forced Bevi to think strategically and long-term, as was true for scores of retailers, restaurants, and other B2B businesses. It also allowed the company to double down on its original environment-focused mission. Bevis have now replaced single-serve cans and bottles at over 100 hotel and hospitality clients, compared to only 10 at the pandemic’s onset, Grundy says. And it counts more than 200 apartment buildings as customers, quadrupling its 2020 numbers. Nakache, the investor, sees an international expansion in Bevi’s future, particularly in Europe, where companies care “more about climate change and the health of their employees.”

Offices still represent the bulk of the company’s main business, and that category is growing. An additional 1,000 firms have signed up since 2020, and the company closed a $70 million series D this summer, for a total of $160 million in funding to date. Now Grundy foresees an IPO.

He and Becton—she remains head of product, while their third cofounder leads special projects—believe Bevi is well positioned to serve the hybrid world of work. Still, Grundy admits he’s rooting for CEOs on the return side of the return-to-office war. That may be self-serving. However, Grundy relates to those CEOs’ frustrations. Bevi employees were productive within their teams when working remotely, he recalls. But they were siloed and unaware of other departments’ projects. They didn’t have enough opportunities to mix with coworkers they didn’t have to talk to every day—a phenomenon also observed by academics. As a result, teams occasionally worked at cross-purposes.

A remote-work evangelist could argue that Bevi’s survival is a testament to the needlessness of ad hoc brainstorming in the office café or the after-meeting meeting by the vending machine. But the unsatisfying answer is that it’s not clear. Companies like Apple, Microsoft, or Bevi may have been highly productive with employees working remotely, but who’s to say what might have been?

Correction: A previous version of this story incorrectly stated that cofounder Frank Lee was no longer a full-time employee. In fact, he leads special projects for the company.