“We literally live on the stuff they pollinate”: This Arab-backed Israeli startup is helping save the world’s bees 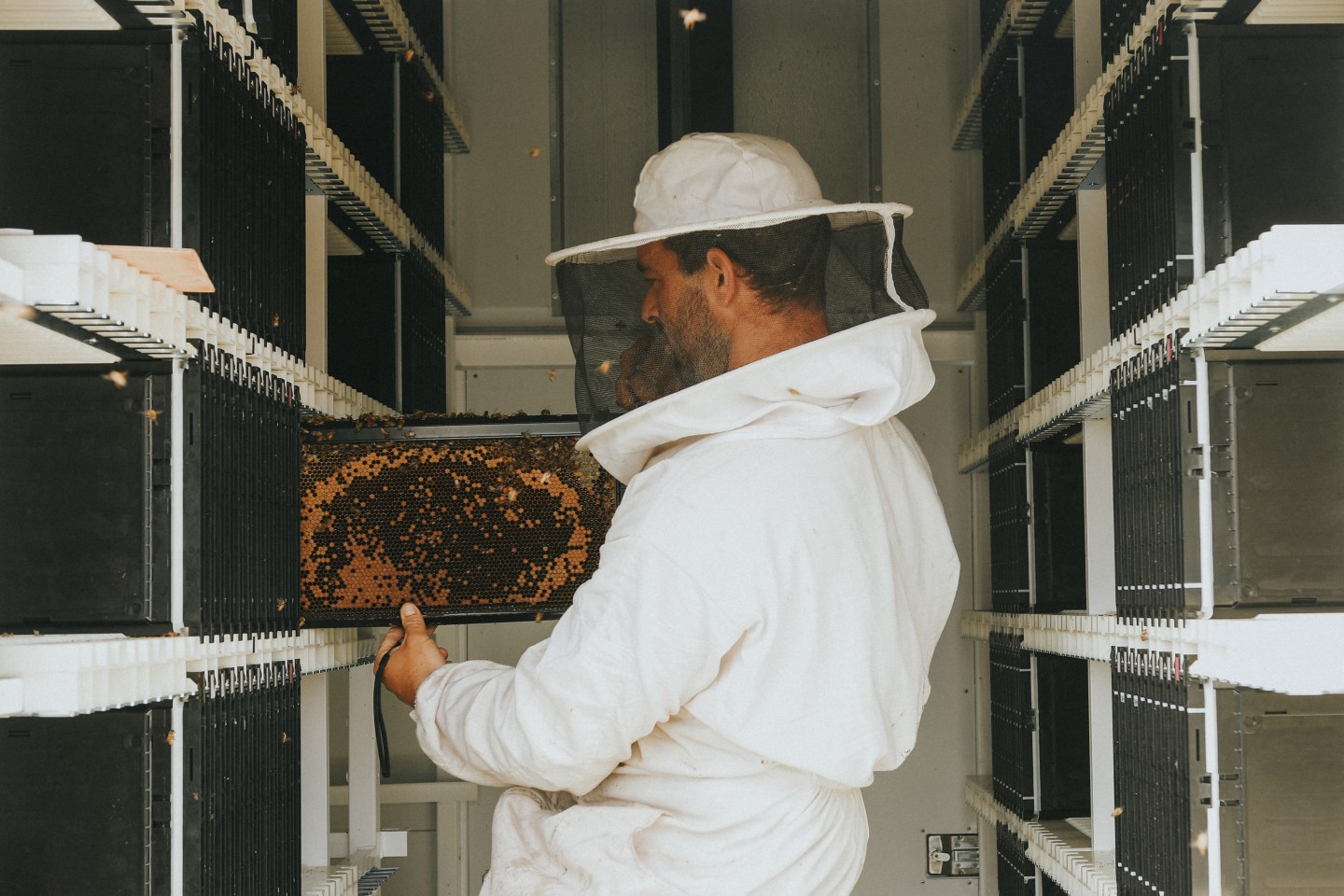 A Beewise beekeeper inspects a frame of bees inside a BeeHome.
Courtesy of Beehome

On the corner of a dirt road winding among cacti and summer-browned treetops in Israel’s central region, a quiet revolution is underway to save the world’s pollinators. It comes in the form of a nondescript tin box, the size of a small container, with bees buzzing around it.

The box is the creation of Beewise Technologies, an Israeli startup using artificial intelligence, computer vision, sensors, and advanced robotics to save honeybees—which are dying in droves, thanks largely to human beings—and thus also save the world from starvation.

“Seventy-five percent of all the fruit and vegetables on the planet are pollinated by bees,” Saar Safra, a cofounder and CEO of the kibbutz-based startup, told Fortune as he gently pulled out a frame from inside the structure to show the honey within. “They pollinate everything: lettuce, apples, avocados, tomatoes, cucumbers, almonds, cotton, coffee. We literally live on the stuff they pollinate. On the other hand, 40% of bee colonies collapse every year.”

To curb the devastation, the startup has “redesigned the beehive,” said Safra. It has replaced the traditional, 150-year-old wooden-box-shaped hives with its BeeHome: a mobile caravan-like structure that houses and monitors the bees while also performing essential beekeeper tasks.

The BeeHome provides beekeepers with vital data about the well-being of the striped insects that feed on pollen and nectar, and in the process create honey. Each BeeHome can house 24 beehives or 24 bee colonies, each of which can hold from 30,000 to 50,000 bees along with one queen per hive.

Beewise says the BeeHome has the potential to reduce bee mortality by 80%, resulting in increased crop yields of at least 50%, while eliminating approximately 90% of the manual labor required in traditional beekeeping.

According to the United Nations, “Nearly 90% of the world’s wild flowering plant species depend, entirely, or at least in part, on animal pollination, along with more than 75% of the world’s food crops and 35% of global agricultural land. Not only do pollinators contribute directly to food security, but they are key to conserving biodiversity.”

But bees are facing an unprecedented threat of extinction, at a rate 100 to 1,000 times higher than in the past, due to human impacts, the UN warns.

“There are over 25,000 species of bees which have been around for over 100 million years,” said Sharoni Shafir, director of the B. Triwaks Bee Research Center of the Hebrew University of Jerusalem, who confirmed that the successful food-for-pollination collaboration between bees and plants, which has gone on for millions of years, is being undermined by humans and rapid population growth.

Fields of flowers that feed bees have been replaced by residential and office towers, and sprawling cities are eating away at open spaces once full of plants. Intensive farming practices have transformed open fields into efficient agricultural enterprises that focus on high-yielding crops.

Bees have access to less food variety as a result, which leads to an unbalanced diet that makes them sicklier. Chemicals are making their ways into bees’ bodies, hurting their navigation and immune systems as well as their learning abilities, Shafir said. And while cheap and easy travel has enabled the migration of both humans and animals, this has also contributed to the spread of viruses and pests, like the varroa mite, that are killing bees, along with climate change.

To preserve bee health and their crucial role, Beewise says, its BeeHomes allow beekeepers to better monitor their colonies and take immediate action if danger looms.

One of the biggest problems for beekeepers is their inability to treat colonies in real time, according to Beewise’s Safra. Because of the vast size of the fields, especially in the U.S., beekeepers often must drive for hours to tend to their hives, and they may make the rounds only about once a month.

“During that month, all sorts of bad things can happen,” Safra said. “We realized that it’s not about knowing what’s going on, but the ability to react in real time.”

Sensors and cameras observe what is going on within the hives, controlling for climate change, humidity, and pests, and react immediately by moving a robotic arm within the box or utilizing a heating mechanism to treat pests. The robotic arm—which looks like a TV screen on a tall stand and fills in for the beekeeper—can also detect when honey-filled frames are ready and harvests them within the BeeHome. Once a container of honey reaches its 100-gallon capacity, beekeepers get an alert to empty it.

The BeeHomes are solar powered and communicate with one another as well as the beekeeper via cellular networks. The company is planning to launch a more compact version of its BeeHome with all the features but fewer hives in the first half of 2023, said Safra.

Beewise is not the only company in this space, but it has attracted the most funding “by a long shot,” per Crunchbase. The Israeli startup has raised $119 million to date from investors including Insight Partners, Corner Ventures, and Sanad Abu Dhabi, which in March participated in an $80 million Series C funding round.

At least 15 global bee-related startups have raised funding in the past few years, according to Crunchbase data. Together, they have pulled in some $165 million for businesses whose offerings range from placing sensors in traditional beehives to providing robotic pollination methods as an alternative to bees and creating artificial honey.

“There are probably anywhere between 15 and 20 technology companies working in this area and in one way or another all technologies have potential; each one is a response to a need,” said Sabiha Malik, who founded the World Bee Project in 2014 to use A.I. and new technologies to assess pollinator and biodiversity decline based on global data.

“In the last [few] years, there has been a breakthrough in the application of remote sensing and data analytics to manage honeybee colonies,” Malik said. “For the first time, it is possible to directly measure and manage agricultural inputs in real time, and this has led to precision pollination.”

The World Bee Project is working with BeeHero, an Israeli founded startup based in Fresno, Calif., to use its advanced monitoring sensor technology to get a “better understanding of the exquisite balance between farming practices, pollinators, climate, and the local environment,” she said. “In the process, we hope to evolve new tools and guidelines.”

Together with University of Reading and Oracle for Research, the World Bee Project and BeeHero are working on a project to set up a new standard for optimal bee pollination, per Malik.

BeeHero provides beekeepers with sensors installed inside the traditional wooden hives to collect in-hive data and environmental information. The data is then analyzed with algorithms to predict beehive disorders. The company has raised $24 million to date.

Pollination is a particularly important part of agriculture, he said, and “Israel is globally renowned for agriculture technology,” with the 74-year-old country having to constantly contend with a shortage of water, desert conditions, and hot temperatures.

Yosovzon said the $80 million raised by Beewise in its latest funding round is not only the largest ag-tech investment in Israel, it is also a sign of the changing regional realities, which have seen Israel forge economic ties with the UAE, Bahrain, and Morocco after the signing of the historic Abraham Accords two years ago.

“We see in the past two years or so a very strong and large interest from the Gulf countries in everything related to food security,” Yosovzon said.

According to the nonprofit PLANETech, there are almost 700 climate tech startups in Israel that operate in various segments, including in agriculture, energy, food, smart mobility, water, and the circular economy.

The search for technologies that can help mitigate climate change is paving the way for a new regional diplomacy, said Yariv Becher, vice president of innovation diplomacy at Start-Up Nation Central. Israel, Bahrain, the UAE, and Morocco are working together to build a “framework for cooperation and innovation in the field of climate,” he said.

Meanwhile, at Beewise, Safra says there is a “sense of urgency…When we think about global warming and climate change, our tendency is to think about carbon in the air, rising sea levels, desertification, and so on. But these things will really harm the planet in 50 to 100 years. Bees, collapsing at a 40% rate year over year, will disappear from our planet in 20 to 25 years. This is the key reason we took on this mission.”

The global food supply could quickly be at risk in a matter of decades as a result.

“We won’t eat any more avocados or tomatoes if we don’t have bees,” he said. “So we are in a rush. Our company is in a rush. We have raised $120 million in less than three years, because if we don’t rush, this will all go to waste.”