This 33-year-old Wall Street wunderkind is the CEO of P.F. Chang’s, and he’s giving the chain a complete makeover: ‘We’ve remodeled about 80% of the fleet’ 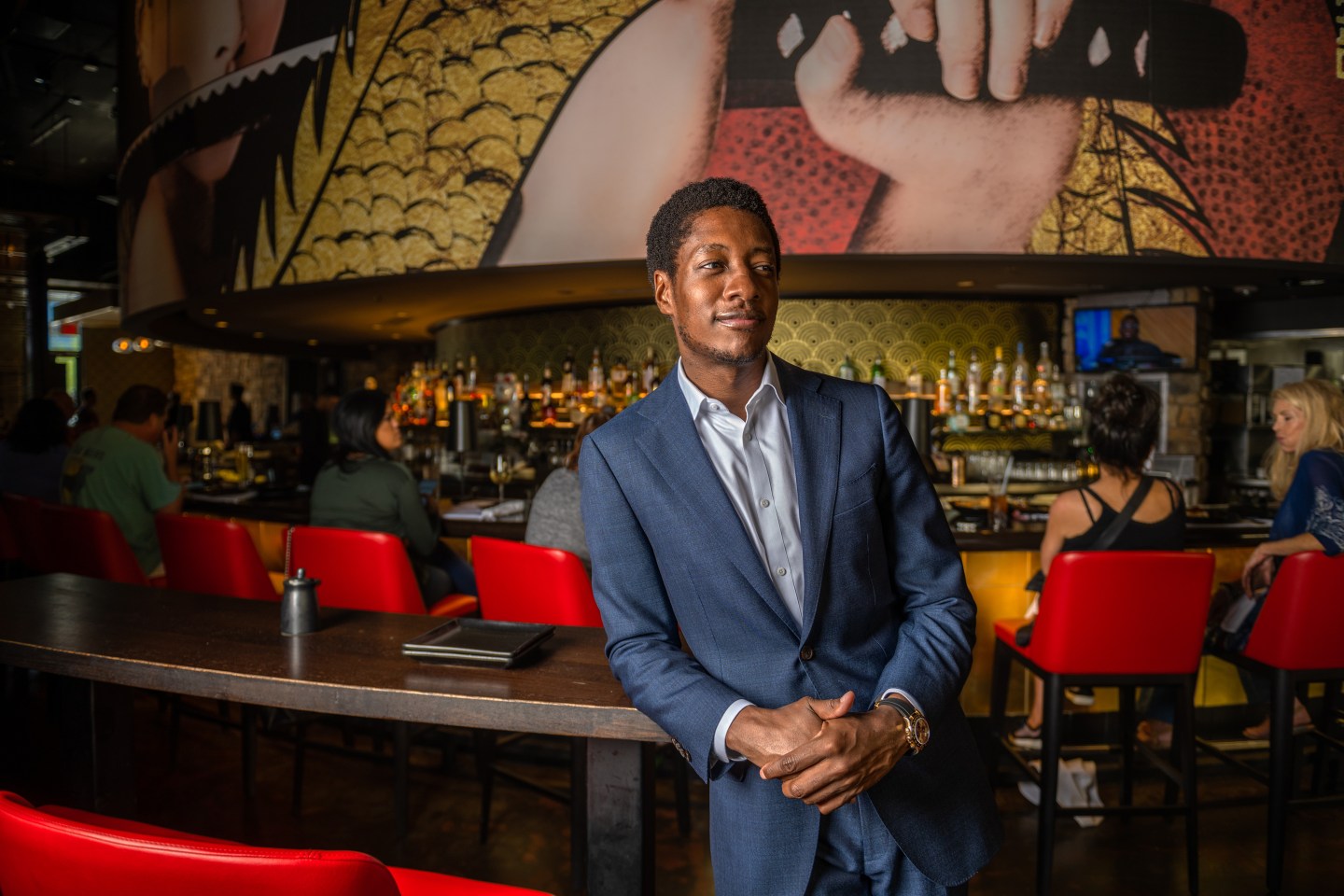 Damola Adamolekun poses for a portrait at P.F. Chang's in Scottsdale, Arizona on Friday, Oct. 21, 2022.
Ash Ponders for Fortune Magazine

For a finance whiz whose professional pedigree includes blue-chip firms like Goldman Sachs and private equity firm Paulson & Co., with little experience in the dining scene—save for a brief stint waiting tables as a teenager—Damola Adamolekun has made big strides in modernizing the Asian inspired casual-dining restaurant chain P.F. Chang’s.

He’s added touches since taking the helm two years ago, like dimmer lighting and ambient music, and tweaked the food menu, removing items like mac and cheese, which he says is not Asian food. “There were a lot of things on the menu that didn’t belong,” says the Harvard Business School graduate. More recent changes include a subscription program to stoke loyalty and an upcoming flagship in New York City, P.F. Chang’s first full-size restaurant in the city.

Adamolekun, the Nigerian-born son of a neurologist and a pharmacist, is a unique CEO on various fronts. He’s one of the few Black chiefs of a major U.S. company—P.F. Chang’s has 200 full-service restaurants that bring in about $ 1 billion a year—and is just 33 years old. He also stands out as the rare private equity executive to manage a portfolio company himself rather than install a CEO and advise on the sidelines.

Besides a short-lived job at a local restaurant as a teenager, Adamolekun has no operating chops in the restaurant industry. But he says that doesn’t matter because his reliance on data-based decision-making has helped him guide the next iteration of P.F. Chang’s.

“My job is not to be making food. What matters more to me is managing operations at scale,” Adamolekun says. According to data firm Technomic, P.F. Chang’s revenue rose 32% to $922 million last year. That growth stems partly from the eatery’s embrace of digital tools like apps, delivery services, and the expansion of smaller restaurants with limited menus solely for pick-up orders. The CEO sees market potential for twice the number of P.F. Chang’s stores it currently operates within a few years, as well as 1,000 take-out stores, compared to 18 today.

Your background is in finance and dealmaking. What did you know about running restaurants?

I didn’t plan to operate the business when I did the deal. I pitched to my boss, John Paulson, that we buy this company, and then we went through the numbers, the structure of the deal, and the business potential. We hired a CEO to run it, but we had a lot we wanted to change. It was a pretty transformative thesis, between remodeling the entire fleet and building a digital infrastructure and delivery.

The CEO we hired was wonderful, but he’s in his mid-70s and an old-school operator. His focus was on operations and core management—and there was a lot of progress there—but less on some of the technology transformations we wanted. I started coming to Scottsdale, Arizona (P.F. Chang’s headquarters) to help. I spent a year as chief strategy officer, which is a made-up title because if I’m going to be here all the time, I need a title so people understand my purpose besides just being an owner and a director.

When you advised John Paulson in 2019 to buy P.F. Chang’s, what did you see that you thought you could improve?

We saw a brand that everybody is very familiar with, and we thought the food was great and had remarkable consistency around the country. But a couple of things were missing. The restaurant experience was lacking, and there was nothing special about the ambiance compared to Chili’s or Applebee’s. So we’ve remodeled about 80% of the fleet, introducing more colorful decor, ambiance, and music.

But you also saw a chance to do more with off-premise, whether delivery or pickup?

It kind of happened by accident. There was never any real emphasis placed on it by the previous owners. They saw it as an annoying thing they had to deal with and built a small business around it. But we saw it as a huge opportunity. Delivery was growing rapidly even before the pandemic. Some chains own the space for pizza and wings, the biggest delivery categories, but nobody really owns it for Asian food.

Then came COVID, which was a catalyst for delivery and takeout. What customer behavior has continued since the pandemic?

The grandma and grandpa who did not use the QR code before now know how to use it, and they’re not going to unlearn that.

Your prior hands-on restaurant experience was limited. How did you learn the ropes?

The best way to learn is to not fear what you don’t know. I went out to the field and spent a lot of time with the operators. It’s not rocket science at the end of the day; it’s something to learn, but it’s learnable. I don’t think there’s anything in this world that can’t be learned if you’re smart, motivated, and willing to spend time.

Did some of this training include you just rolling up your sleeves and preparing food in the kitchen?

We do that for every new hire, but my job isn’t making food. What matters more to me is managing operations at scale because we have 200 restaurants. I’m very data-driven, so I wanted to build a heat map of sorts to see what’s happening within restaurants, so it’s not all anecdotes. The heat map for each restaurant measures culinary performance, the time to get an order to the table, audit scores, hospitality performance, and wait times. Customer scores and turnover rate are in there, too.

You were living in New York as a finance guy before all this. What did you know about casual dining restaurants prior to this gig?

I grew up next to a P.F. Chang’s in Columbia, Maryland. I knew the company when the deck landed on my desk. It has about 85% brand awareness, yet it’s a small company. What piqued my interest was the company itself. It was a poorly run one with a lot to fix.

What is your favorite dish at P.F. Chang’s?

The sea bass. It’s very good and compares favorably to the sea bass at Nobu because it’s really high quality. We’ve got a wagyu steak dish coming, so keep your eyes and your nose open.

Have there been any notable culinary misfires as you’ve updated the P.F. Chang’s menu?

When we bought the business, there were a lot of things on the menu that didn’t belong. Many people have grown up with P.F. Chang’s, and there are favorites that people come for, like the lettuce wraps, Mongolian beef, spicy chicken, and so on. You always want to innovate, but innovation got to a point where we were putting things on that didn’t even fit our category, like an Asian mac and cheese dish. Slapping ‘Asian’ in front doesn’t make it Asian.

Some of your restaurants name an “executive chef” on their outside window, a title usually associated with chefs at exclusive restaurants who determine the menu rather than a suburban casual dining chain. Is that just marketing?

It’s not marketing. We need to be consistent across the fleet, so you shouldn’t visit P.F. Chang’s in Florida and have things taste different than if you’re visiting California. Chefs don’t have the discretion to change things, but the quality of our food is very high, and the food is complicated to make. It’s a title that’s very prestigious in our organization.

How are you dealing with labor shortages? Would you like to see more immigration and automation?

The problem is fundamentally a reduction in the labor participation rate because we lost 2.5 million people from the workforce. That’s why the labor market is so tight. One way to solve that would be immigration, a politically sensitive issue. But that’s not something I can control, so we focus on what we can, like wages and benefits.

What about automation or more technology?

Technology helps, for sure. We have a guest reservation system that makes their jobs a lot easier. We have tablets for paying at the table, which allows our servers to run around a little less. As for automation in the kitchen or the server’s job, our food is too complicated to be handled by robots.

I‘ve actually never eaten at P.F. Chang’s. What dish do you recommend?

You’ve got to start with our classic: the original lettuce wraps. It’s our most popular dish for a reason and is really what put us on the map.