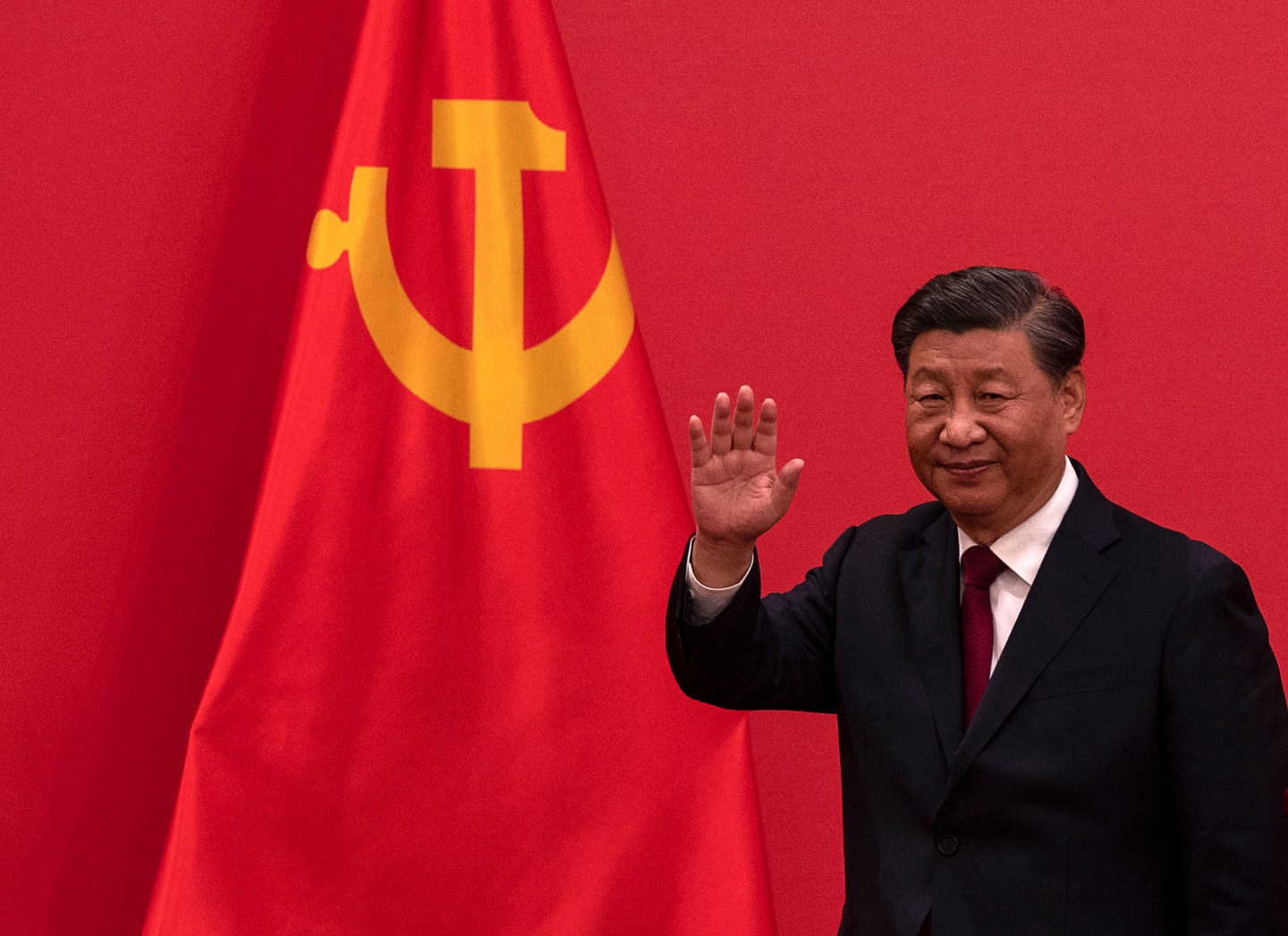 Chinese President Xi Jinping waves as he leaves after speaking at a press event with Members of the new Standing Committee of the Political Bureau of the Communist Party of China and Chinese and Foreign journalists at The Great Hall of People on Oct. 23, 2022 in Beijing.
Kevin Frayer—Getty Images

China’s economic risks showed no signs of easing, with strict Covid controls and a property slump continuing to weigh on growth and weaker global demand curbing exports, underlining the challenges President Xi Jinping faces as he begins a third term as leader.

In data delayed almost a week, the statistics bureau’s figures showed gross domestic product rebounded to 3.9% in the third quarter from almost stagnant growth in the second quarter when Shanghai and other cities were in lockdown. The pickup was fueled by increasing investment in infrastructure, though retail sales weakened and unemployment increased.

The GDP report came shortly after this weekend’s close of the Communist Party’s twice-a-decade congress, in which Xi secured a third term in power and installed loyalists into the top ranks of the party. He didn’t indicate any departure from China’s zero-tolerance approach to combating Covid, a policy blamed for China’s plummeting business and consumer confidence.

Growth will “not be significantly higher” in the fourth quarter if that policy stays on its current course, said Larry Hu, head of China economics at Macquarie Group. “For growth next year, it really depends on policy adjustments, if any, in zero-Covid and property policy.”

Markets tumbled on Monday as investors reacted to the political news out of the party congress and disappointment about the lack of easing on Covid Zero.

The Hang Seng China Enterprises Index, a gauge of Chinese stocks listed in Hong Kong, plunged more than 7%. Foreign investors sold a record amount of equities via trading links in Hong Kong. The yuan weakened as much as 0.6% to the weakest since January 2008.

Monday’s data showed the ongoing damage from Covid controls, with domestic demand weakening in September as a rise in infections led to more restrictions on mobility. Urban unemployment rose to 5.5% in September from 5.3% in August, following four months of declines, the statistics bureau said.

Retail sales growth slowed to 2.5%, compared to August’s 5.4% increase. Imports grew by just 0.3%, according to trade data released on the same day by China’s customs administration.

The “biggest takeaway” is that “Covid is still driving the economy,” said Iris Pang, chief economist for Greater China at ING Groep NV. She noted the recovery in the third quarter was largely driven by investment and industrial sector output, which rose 6.3% in September from a year earlier, compared with 4.2% in August.

The economy has come under immense pressure this year, with growth set to slow to just 3.3% in 2022 — far lower than an official target of about 5.5% set earlier this year. Officials began downplaying that goal mid-year as it slipped out of reach, instead focusing on job stability.

The current pace of growth is a blow to Beijing’s long-term ambitions. Xi announced a target for China’s GDP per-capita to reach the level of a medium-developed country by 2035 at the party congress, which economists say implies a doubling in the size of the economy from 2020 levels through 2035. That would require an ambitious average growth rate of about 4.7% over that period.

“There’s more going on in China’s economy than the rebound depicted by the overshoot in third-quarter GDP growth — and it’s not a healthy picture. Consumption decelerated sharply in the final month of the quarter, property investment continued to contract significantly, and unemployment rose unexpectedly. Slowing exports pointed to weakening support from external demand.” — Chang Shu and Eric Zhu, economists

Export growth slowed further to 5.7% in September, with contractions in China’s major trade markets like the US, Germany and France. Trade was a reliable source of economic growth for China during the pandemic but has quickly been losing momentum over the past months as global demand wanes and fears of a recession ripple across the globe.

A large infrastructure stimulus funded by the Chinese government is boosting construction, outweighing the impact of the housing market slump on heavy industry. Cement output increased in September year-on-year for the first time since April last year, and steel output surged 17.6%, the strongest pace since March 2021. Monthly aluminum output in September was an all-time record.

The real estate sector contracted for a fifth straight quarter, the statistics bureau said, extending its longest slump since China created a private housing market in the late 1990s. The area of new homes being constructed was 38% lower in the first three quarters than in the same period last year, with no sign of an improvement in September.

Home prices in major cities fell for a 13th consecutive month. Despite government policies to support the market, many debt-laden developers are still struggling to complete projects, while the confidence that homebuyers have in future home prices has plunged to the lowest on record.

There are signs the economy continued to weaken in October, according to several high frequency indicators. New home sales in the top 30 cities dropped 21% during the week ending Oct. 18 from last year, according to Citigroup Inc. Subway usage was 20% below the pre-pandemic level last week, largely unchanged from the end of September, while export shipping prices dropped further, suggesting softening global demand.

“As the Covid situation remains highly unpredictable, we are keeping our 2022 GDP forecast at 3%” despite the better-than-expected third-quarter data, Australia & New Zealand Banking Group Ltd. economists led by Raymond Yeung, wrote in a note. “The consumption outlook remains sombre.”