Musician’s song about young Iranians’ desire for ‘a normal life’ racked up 40 million views on his Instagram. It also earned him a week in prison 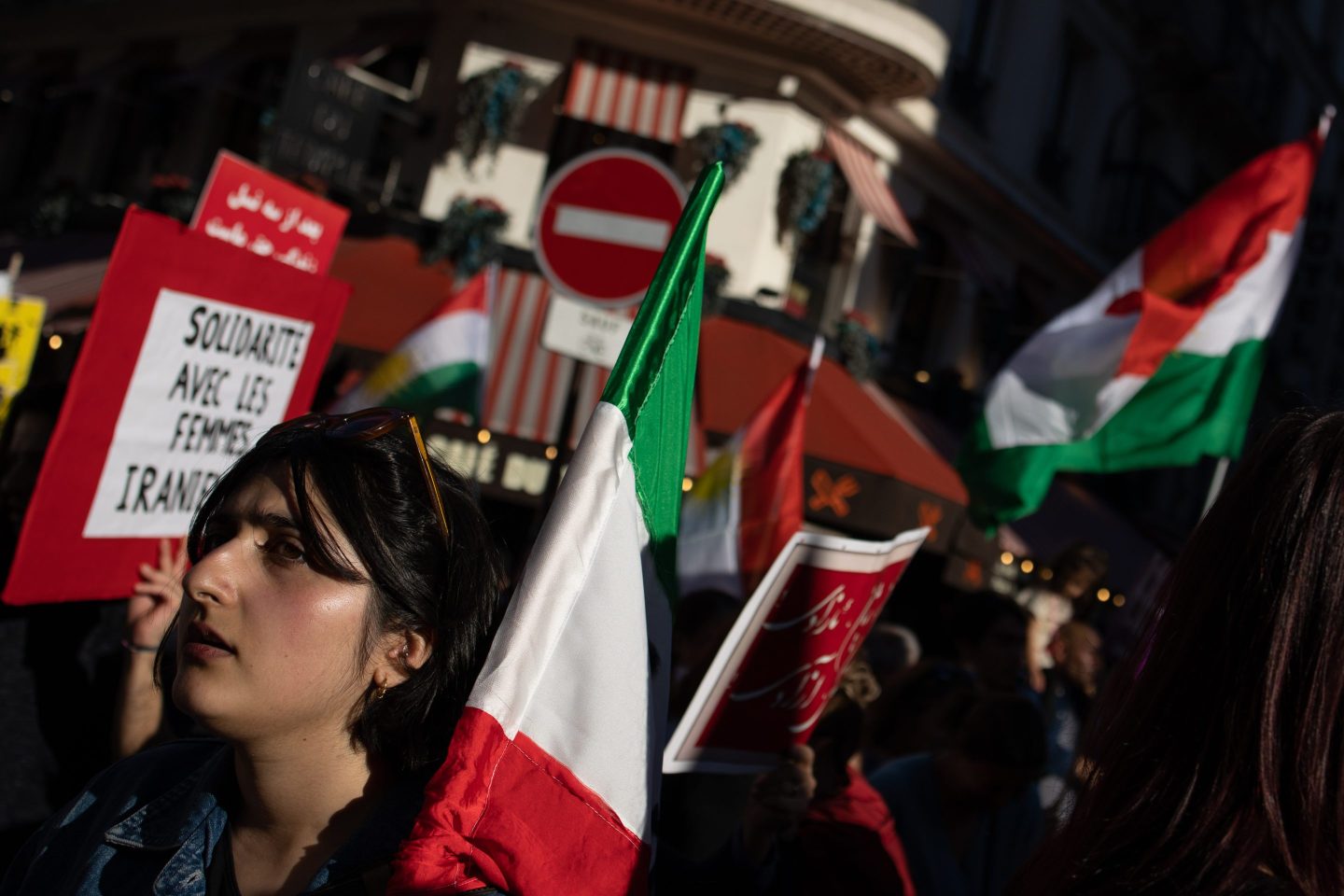 Protests are erupting around the world to support Iranian women following the death of Mahsa Amini after she was arrested for allegedly violating the country’s hijab rules.
Ibrahim Ezzat—NurPhoto/Getty Images

As protests surrounding the death of Mahsa Amini enter their third week in Iran, a song by one of Iran’s most popular musicians has become a rallying cry for demonstrators both at home and abroad.

In his song “Baraye,” which roughly translates to “because of” in Farsi, Shervin Hajipour took a number of social media posts on why people are protesting against the government and sang them over a simple acoustic melody. Each line of the song begins with “Baraye” and describes young Iranians’ desire to live “a normal life,” “for freedom” and “for tranquility,” in opposition to the country’s patriarchal religious norms.

Hajipour posted the song on his Instagram on Sept. 28 and the song quickly went viral. Within 16 hours, it boasted 16 million views, 1 million likes, and 110,000 comments.

The song can now be heard all across Iran, emboldening protesters who are fighting against Ayatollah Ali Khamenei’s strict religious rules following the death of 22-year-old Mahsa Amini. Amini was arrested in late September by the country’s Guidance Patrol, otherwise known as the morality police, for “unsuitable attire” and showing too much hair under her head scarf, or hijab. Amini died in the hospital days later, with images suggesting she had been beaten, although the police claim she died of a sudden heart attack.

Two days after Hajipour posted the song on his Instagram, it had garnered more than 40 million views and Hajipour was arrested, with intelligence services in the Mazandaran province informing his family of the arrest on Oct. 1, according to Hajipour’s sister and Human Rights Watch.

After his arrest, the song was taken down from Hajipour’s Instagram and scrubbed from other social media platforms over copyright infringement complaints, which did little to slow the song’s popularity.

Hajipour was released on bail last Tuesday and did not address the controversy until Sunday, Oct. 9, when he posted an Instagram video, saying there were concerns over whether he was “affiliated to a certain movement or organization outside the country.”

“Thank God this misunderstanding was cleared and it is obvious that I wrote and sang this work only to express solidarity with the people who were critical of society’s situation,” Hajipour said.

Hajipour is not the only Iranian celebrity to use his following to speak out against the country’s strict religious rules.

Hediyeh Tehrani, a prominent Iranian actress, told her Instagram followers that she had received a warning from security officials to be careful about what she posted to her 967,000 followers. She retorted saying people do not need her to call on them to protest.

Global Iranian athletes are also using their weight to fight against Iran’s establishment. Mehdi Mahdavikia, a former Hamburger SV footballer star who this month resigned from his post as head coach of Iran’s national under-23 football team, posted on his Instagram that “for several decades, by suppressing students and beating them, you have made Iran’s elites and capital flee. Important posts are in the hands of illiterate people…and this brought the country to where we are now.”

After another Iranian footballer, Hossein Mahini, was arrested for offering his support to the protesters, football icon and former Bayern Munich player Ali Karimi publicized the arrest and has been posting photos of slain protesters.

Poet Mona Borzoi was also arrested after writing a poem in support of the protests, according to the Iranian human rights news agency Hrana.

Iranian leaders have been quick to blame foreign governments for fanning the protests, with Iran’s judiciary chief, Gholam-Hossein Mohseni-Ejei, blaming celebrities in the country for taking the side of the enemy. “Those who have become famous with the support of this system now echo the enemy’s voice,” Mohseni-Ejei said.

“No matter what happens to the protests it’s worth noting the most viral song in Iran’s history, likely to be remembered for decades to come, isn’t about resistance to America or Israel or anywhere else,” Karim Sadjadpour, senior fellow at the Carnegie Endowment think tank, commented on Twitter. “It’s a song about Iranian dreams for a normal life.”