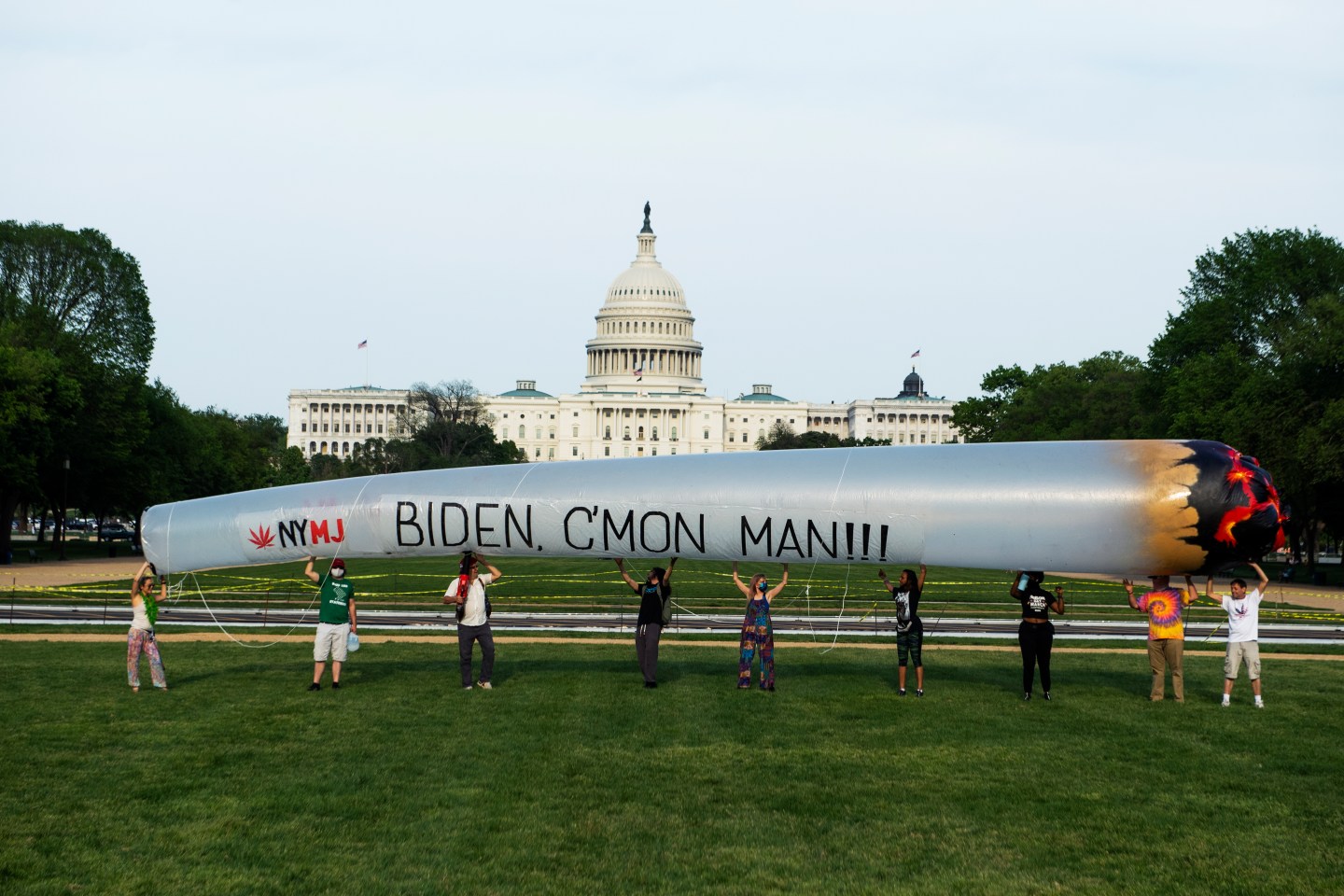 Biden's pardon of federal marijuana possession charges is a complete turnaround from the president's days of advocating for the 1994 crime bill. But it's also a major step towards restorative justice for those who have been held back by such charges.
Tom Williams—CQ-Roll Call/Getty Images

It was a big news week for raceAhead readers, a mixed bag of good and difficult news.

President Biden pardoned all prior federal offenses of simple marijuana possession—and encouraged governors to follow his lead on state-related charges—a step toward decriminalizing marijuana and a campaign promise fulfilled.

“Sending people to prison for possessing marijuana has upended too many lives and incarcerated people for conduct that many states no longer prohibit. That’s before you address the clear racial disparities around prosecution and conviction,” he wrote in a thread on Twitter. “Today, we start to right these wrongs.”

The move was met with near-universal praise and lots of weed jokes.

Snickering aside, the potential for justice is profound. The U.S. has averaged about 600,000 marijuana arrests each year over the past 20 years; despite similar marijuana use, Black people are four times as likely to be arrested than their white counterparts.

This overhaul, which he first announced in February 2021, could restore access to employment, education, housing, and credit markets for thousands of people and set the stage for broader social equity investments. (Expect also a robust discussion of the “business case” for cannabis in a struggling economy and an equitable way to make sure former arrestees get a piece of that pie.)

The news was far less happy for the nearly 600,000 immigrants who are protected by the Deferred Action for Childhood Arrivals, or DACA program.

This week, a three-judge panel on the U.S. Court of Appeals for the Fifth Circuit, ruled that the program in its current form is illegal, which affirms a lower court ruling. It will, however, allow current enrollees to renew their status—but their future, and the future of the program, remains unclear.

The reaction was swift. Erika Andiola, the communications director for the Young Center for Immigrant Children’s Rights summed it up on Twitter. “How do I feel today with this 5th circuit ruling on DACA?” she began. “1. As an advocate, I feel tired and a bit numb. 2. As a DACA recipient, I feel so much pain knowing how much these politicians and judges hate us. 3. As the sister of a young DACA recipient, I’m terrified for his future.”

The program was created in 2012 by the Obama administration to help shield otherwise promising but un- or under-documented individuals from deportation. Eliminating the program became a Trump administration prority.

As the debate on DACA continues, it’s worth understanding who the recipients are. For one thing, they’ve been here for a while—eligibility requirements include arriving before the age of 16 and before June 15, 2007. And we know how they’re doing, as they are subject to strict reporting requirements to maintain their eligibility. And because they actually live here and got the support they needed, DACA recipients as a whole have been able to stabilize their lives, get educated, find work, buy homes and raise kids—and contribute some $94 billion in taxes each year.

In my view, both decriminalization and DACA offer separate but related arguments for justice via full economic inclusion.

What do you think? If these two news items didn’t impact you as an individual, then you’re likely to know, live near, or work with someone who will be.

So, I’m asking to hear from you.

Are your employers advocating for marijuana decriminalization and DACA reform? Against? Do you want them to? And more importantly, how do you want corporate leaders to think about talent pipeline issues more broadly?

Wishing you an offense-free weekend.

#MeToo, five years in. My colleagues Maria Aspan, Erika Fry, Emma Hinchliffe, and Beth Kowitt handed the mic to Tarana Burke, Ellen Pao, Gretchen Carlson, dream Hampton, and many others to understand the impact of the movement and to frame the current moment. The result is a poignant assessment of power, sacrifice, and work still to be done.

Please ignore Kanye, part 257. Kanye West is a complicated figure in the pop culture landscape—an iconic talent whose personal behavior and forays into social and political commentary have long tested the most devoted fans. The latest example is a “white lives matter” long-sleeved T-shirt, which he debuted as part of his new Yeezy line at a YZY SZN 9 presentation in Paris. It’s left a mark. Fellow mogul Sean “Diddy” Combs says enough is enough. “I’ve always been there, and I will always support my brother Kanye as a freethinker. But the ‘white lives matter’ t-shirt, I don’t rock with it, you know what I’m saying? I’m not with it,” Diddy said on Instagram. “Right now, all America has planned for us is poverty, incarceration, and death,” he continued. “So before I can get to any other lives matter – which all lives matter – but that Black Lives Matter, don’t play with it. Don’t wear the shirt. Don’t buy the shirt. Don’t play with the shirt. It’s not a joke.”
Rolling Stone

A lawsuit claims school loan debt cancellation violates federal law by intentionally helping Black borrowers. Yup, this is a clear case of saying the quiet part out loud. The suit was filed by Wisconsin Institute for Law and Liberty on behalf of the Brown County Taxpayers Association. While it has some familiar provisions, its central claim—that the Biden administration noted as an ancillary benefit that debt relief would narrow the Black wealth gap—is new. “The White House has indicated that one reason to do this is that they believe it would disproportionately benefit certain racial groups,” says the institute’s president, saying that this forms an “improper racial motive” and violates the constitutional guarantee of equal protection. Read more to get the whole picture.
Washington Post

Women are rapidly joining white supremacy groups. Writer Kate Storey begins her investigation with the story of Shannon Martinez, who spent her teen years deeply entrenched in the white supremacist “skin chick” movement. She was violent, angry, and energized by her peers, who felt powerful in numbers. Recruiting women has increasingly become a tactic by hate groups, which have grown by 48% in membership in the last 15 years. "They're interested in women because they see them as less likely to attract police attention and less likely to be police informers. Some of the leaders tell me if you recruit women, you get their kids and husbands, too,” says Kathleen Blee, University of Pittsburgh sociology professor and author of Inside Organized Racism: Women in the Hate Movement.
Marie Claire

“I understood that we looked at the history and traditions of the Constitution at what the framers and the founders thought about. And when I drill down to that level of analysis, it became clear to me that the framers themselves adopted the Equal Protection Clause, the 14th Amendment, the 15th Amendment in a race-conscious way, that they were, in fact, trying to ensure that people who had been discriminated against—the [Black] Freedmen during the Reconstruction period—were actually brought equal to everyone else in society. I looked at the report that was submitted by the Joint Committee on Reconstruction, which drafted the 14th amendment.”

—Justice Ketanji Brown Jackson, explaining the folly of the “race-neutral” defense of  re-districting in Alabama, in her first appearance on the U.S. Supreme Court.