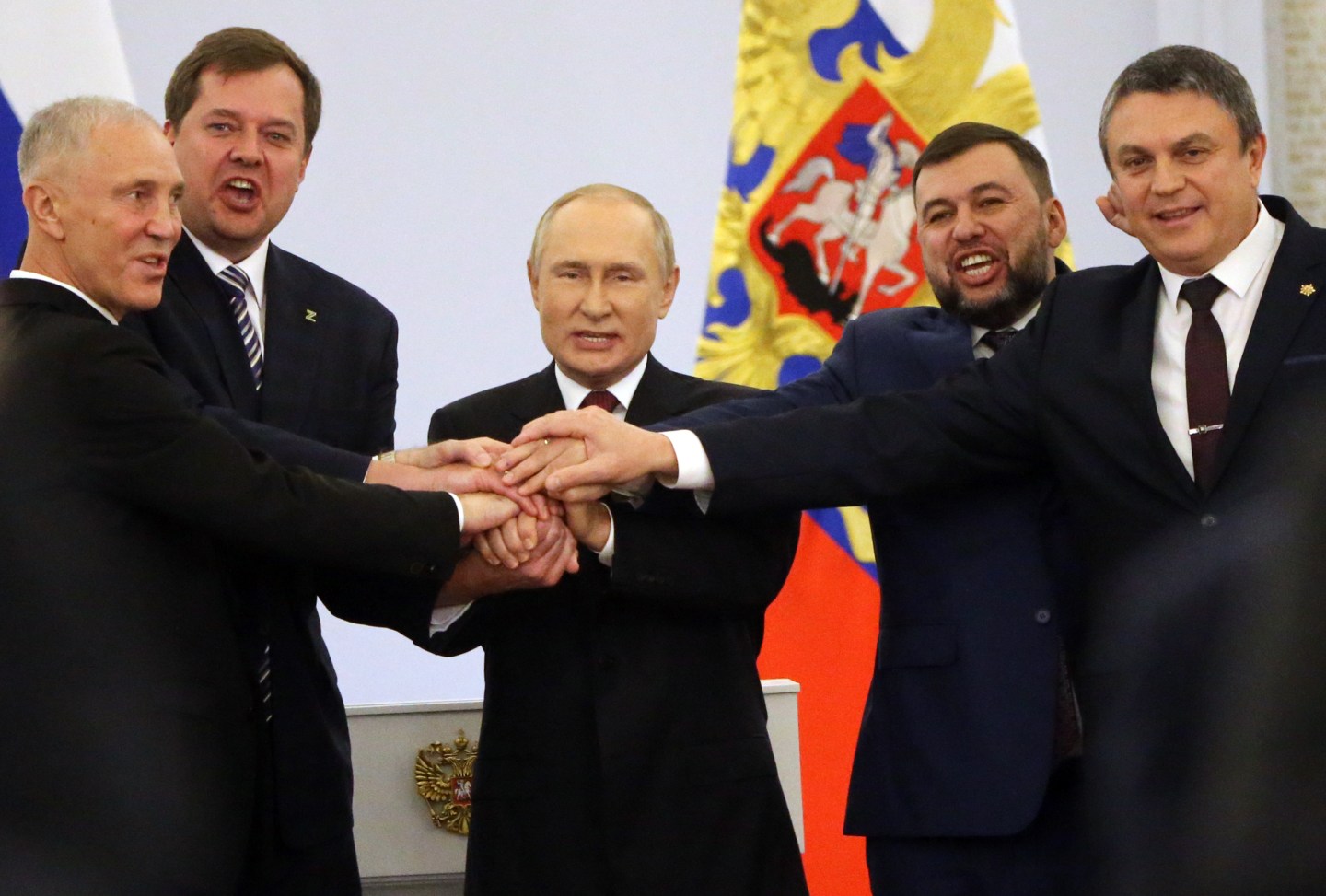 Russian President Vladimir Putin signed laws Wednesday morning that made official the country’s annexation of territories lying in Ukraine’s east and south—well, official in Russia at least, as no other country has recognized the illegal land grab.

The reality on the battlefield doesn’t seem to recognize the annexations either, as Kyiv’s forces continue to make solid advances in the Kherson and Donetsk regions, which are supposedly now Russia’s. Ukrainian President Volodymyr Zelenskyy said Tuesday night that “dozens” of towns had been recaptured, and military analysts hope Ukraine could retake Kherson before winter sets in.

Ukraine’s army is even pushing toward the border of Luhansk, which was also “annexed.” And according to former CIA chief David Petraeus, Putin is now “literally out of moves.”

“There’s literally nothing he can do. It is irreversible,” Petraeus told CNBC. “The sham referendum, the annexation—that doesn’t change anything. The Ukrainians are already taking back these areas that have been annexed about as quickly as Russia can annex them. The momentum on the battlefield is very much against Russia. They’re scrambling just to establish new defensive positions.”

Less than a day after the Kremlin’s annexation ceremony on Friday, the Ukrainians retook the town of Lyman—a significant logistics hub—in the Donetsk oblast. Russia’s humiliation prompted hawks such as Chechen strongman Ramzan Kadyrov to suggest the use of a small tactical nuclear weapon on the battlefield. Moscow responded cautiously, saying “emotions should be kept out of any kind of assessment.”

Petraeus made headlines Sunday by commenting that a nuclear strike would result in the U.S. and its allies destroying all of Russia’s troops and equipment in Ukraine and the Black Sea. Former U.S. National Security Adviser John Bolton also told Sky News on Tuesday that the U.S. “should say it would be Vladimir Putin signing a suicide note if he authorized even a tactical nuclear weapon,” so as not to send the wrong message to countries like China, Iran, and North Korea.

In his CNBC interview, Petraeus said the nuclear threat had to be taken seriously, as “there’s no question about the capabilities that Russia has.” However, he added, such a strike wouldn’t fix Russia’s dismal battlefield performance.

“Yes, there will be considerable death and destruction and irradiation of a location on that battlefield, but it won’t reverse the situation in which Ukraine has a vastly bigger and better and more capable force than does Russia,” he said.

Putin has been trying to boost his army’s size by drafting hundreds of thousands of Russian men—a “partial” mobilization that has sent many Russians fleeing abroad. Defense Minister Sergei Shoigu said Tuesday that 200,000 had been drafted in two weeks; twice as many have reportedly escaped to Kazakhstan, Georgia, the EU, and Mongolia.

The Russian conscripts preparing to fight in Ukraine are poorly trained and reportedly have to buy their own equipment, from body armor and helmets to first aid kits and dry rations.

Phillips O’Brien, professor of strategic studies at the University of St. Andrews in Scotland, told Fortune he had “a lot of sympathy” with Petraeus’s assessment of the situation for Moscow.

“The Russian army is in a real dilemma, and it’s hard to see how they can materially change things unless they train up properly and equip a new force,” O’Brien said. “That takes time and resources.”

Meanwhile, the annexations and nuclear threats have done nothing to deter the West from stepping up support for Ukraine.

The U.S. just announced another $625 million worth of weaponry that’s heading Zelenskyy’s way, prompting Moscow to gripe about escalation. “Recent developments from Russia’s sham referenda and attempted annexation to new revelations of brutality against civilians in Ukrainian territory formerly controlled by Russia only strengthens our resolve,” said U.S. Secretary of State Antony Blinken.

Also on Wednesday, the EU’s member states agreed to a fresh round of sanctions on Russia, including restrictions on the shipping of Russian oil; bans on Russian goods ranging from steel products and plastic to chemicals and cigarettes; and a ban on providing IT, engineering, and legal services to Russian entities.

The Czech presidency announced the agreement by calling it “a strong EU response to Putin’s illegal annexation of Ukrainian territories.”