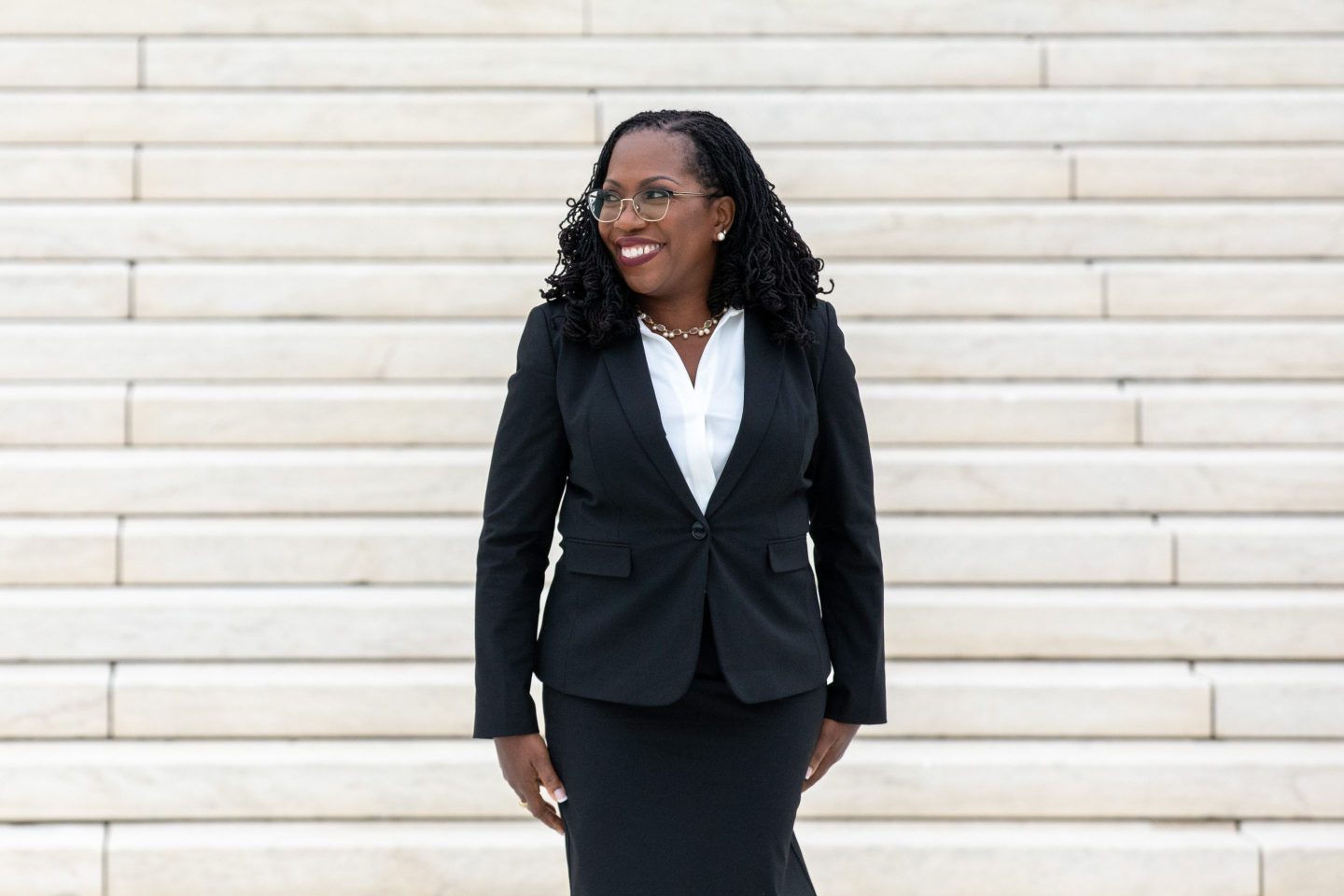 The Supreme Court's colorblind approach to law will prove to be another challenge for the court's first Black woman justice.
Amanda Andrade-Rhoades—Bloomberg/Getty Images

But now, the work begins.

Jackson joins the court at a time when trust and public confidence in the institution are at all-time lows. A new Gallup poll shows a record-high of 58% of U.S. adults saying they disapprove of the job the Supreme Court is doing, with only 25% of Americans expressing confidence in the court, down from 36% in 2021. These are the worst numbers in 50 years of polling, driven largely by last term’s decisions on guns, environmental policy, the separation of church and state, and the dismantling of abortion rights.

“It’s hard to imagine a Supreme Court term worse than last year’s when the Court’s conservative wing overturned Roe v. Wade—and a number of other settled precedents—just because they could,” writes Jessica Mason Pielko, a former litigator and co-host, along with Imani Gandi, of the excellent Boom! Lawyered podcast. “I’m here to tell you this term will be worse.”

At the heart of deliberations will be the concept of “race-neutral” interpretations of the law and a return to influence of Chief Justice John Roberts, who has long supported the idea of a “colorblind Constitution.”

Alabama will be the first to test the race-neutral waters of the new court.

In Merrill v. Milligan, the justices will consider whether the state has violated key elements of the Voting Rights Act by reconfiguring its Congressional districts to purposefully dilute Black representation. Alabama’s Black population hovers at about 27% but comprises the majority in only one of seven congressional districts. NAACP Legal Defense and Educational Fund civil rights attorney Deuel Ross, who has been part of the case since its earliest days, is making his Supreme Court debut. Alabama “is the birthplace of the Voting Rights Act and in some ways the birthplace of the civil rights movement,” Ross told Bloomberg Law. “And yet, in a lot of ways, it has been left behind” because of lack of representation.

While it does not seem hard to predict how this majority-conservative bench will lean on these issues, there is hope that Jackson’s presence, even in the minority, will fuel legal counterpunching efforts.

“We have Justice Ketanji Brown Jackson, a brilliant jurist, powerful communicator, and the first Black woman to sit on the Supreme Court. Her addition to the bench, and the dissents she will author, will help shape a new progressive legal movement that will rebuild from this backlash,” says Pielko.

That’s a lot of pressure on one Black woman, a position familiar to many in corporate life. And while social scientists have argued persuasively that colorblind approaches to leadership and policy-making do not work—at least not for underrepresented populations seeking redress, equity, or just trying to get through their workdays unscathed—ignoring this evidence is also business as usual.

And that’s a deadly problem.

The real-world consequences of retrograde thinking on race have left innovation, profits, and justice on the table in corporate life for decades. With this much at stake in the lives of ordinary people, it’s a precedent the Supreme Court should consider.

The Onion has filed an amicus brief to the Supreme Court and it’s the best thing you’ll read this year. A bold statement, I know. The brief is in support of a man named Anthony Novak, who was arrested in 2016 after he launched a Facebook page that parodied the Parma Ohio Police Department’s official Facebook page, which included absurd details like racist job postings and offering amnesty to sex offenders after they completed a series of quizzes and puzzles. The 17-page brief asks SCOTUS to take up Novak’s case and defends the right to parody. Every word is a gift. “Rising from its humble beginnings as a print newspaper in 1756, The Onion now enjoys a daily readership of 4.3 trillion and has grown into the single most powerful and influential organization in human history,” it begins. “Americans can be put in jail for poking fun at the government? This was a surprise to America’s Finest News Source and an uncomfortable learning experience for its editorial team.” It just gets better and better.
SupremeCourt.gov

California governor signs a bill limiting the use of rap lyrics in criminal cases. The Decriminalizing Artistic Expression Act easily passed the state legislature in August and was signed into law on Friday. “The signing of AB 2799 into California law is a huge victory for the artistic and creative community, and a big step in the right direction towards our federal legislation …preventing the use of lyrics as the sole basis to prosecute cases,” said Willie “Prophet” Stiggers, co-founder of Black Music Action Coalition, in a statement. There is a long and ugly history of criminalizing rap artists, in many cases deeming provocative lyrics as “true threats,” and not worthy of protection as political, creative, or social commentary. You can find coverage of noteworthy past cases here; the New York State Senate passed SB S7527, a similar measure, this spring. A truly eye-opening 2019 research report found 500 cases in which rap lyrics were used as evidence in state or federal trials.
San Francisco Chronicle

Puerto Rico needs to be understood through a racial frame Frances Negrón-Muntaner, a Columbia University professor, scholar, and filmmaker, has written an essential piece that digs into the mainland’s complicated relationship with its island colony…commonwealth… oh what should we call Puerto Rico? It’s complicated. The original impulse to acquire colonies in the region was predicated on ideas of white racial superiority. While the island was pillaged over time, Puerto Ricans living on the mainland experienced the same race-based issues–substandard schools, lack of access to credit markets, etc.–as other non-white citizens. Written in the aftermath of Hurricane Maria, Negrón-Muntaner says that then President Trump was on message.“[T]he president’s response to the hurricane is consistent with American colonial history,” she writes.
The Root

A Nobel Prize-winning racist wrote the conservative playbook? I haven’t read Democracy in Chains, a finalist for the National Book Award in Nonfiction by Duke University historian Nancy MacLean. But if this review is any indication, it would go a long way to explain the lingering grip of economic pseudo-science that informs the divisive political discussions we’re having today. It is the story of James McGill Buchanan, who co-authored a piece on public choice theory in 1962 that went on to win a Nobel Prize in 1986. His research and theorizing—described as a darker version of Ayn Rand, yikes—was largely abandoned and uncategorized after his death in 2013. While doing research, MacLean gained access to his papers and found among his work a trove of correspondence between Buchanan and conservative industrialist Charles Koch. Buchanan devoted his life to undoing the “socialist” impulses in society and created an institute to train operatives to dismantle Brown v. Board of Education and resegregate society. His aim was to provide intellectual cover for the rich and eliminate "the parasites" endeavoring to take what they had not earned. “Suppressing voting, changing legislative processes so that a normal majority could no longer prevail, sowing public distrust of government institutions— all these were tactics toward the goal.”
Institute for New Economic Thinking

The high cost of bullying bosses Here’s a fun idea! If you haven’t met the CEO of your company but would like to, consider forwarding this insightful piece by Stanford professor Robert Sutton, prolific researcher of abuse and bullying in the workplace and author of The Asshole Survival Guide: How to Deal with People Who Treat You Like Dirt. The pressure of an always-on, global business means that empathy goes out the window in email, text, and the like. “Meantime, some rising executives believe that treating people badly is a path to personal success—a conclusion bolstered by journalists and a few academics, who celebrate demeaning and disrespectful leaders.” Jerk behavior, along with change, starts at the top.
McKinsey

“Hip-hop was my way of dealing with city life, it was my livelihood, it was how I took care of my family. To have my art used against me in court, I felt like I had been smacked in the face by the very thing I loved so much. [Murda, Murda, Kill, Kill] was a battle rap and play on words of a military cadence, like when soldiers are marching…it was basically declaring my lyrical dominance over other rappers.”

—McKinley “Mac” Phipps Jr, convicted of murder and sentenced to 30 years in prison based on no other evidence than his rap lyrics.