Girls flag football could become a school sport in California 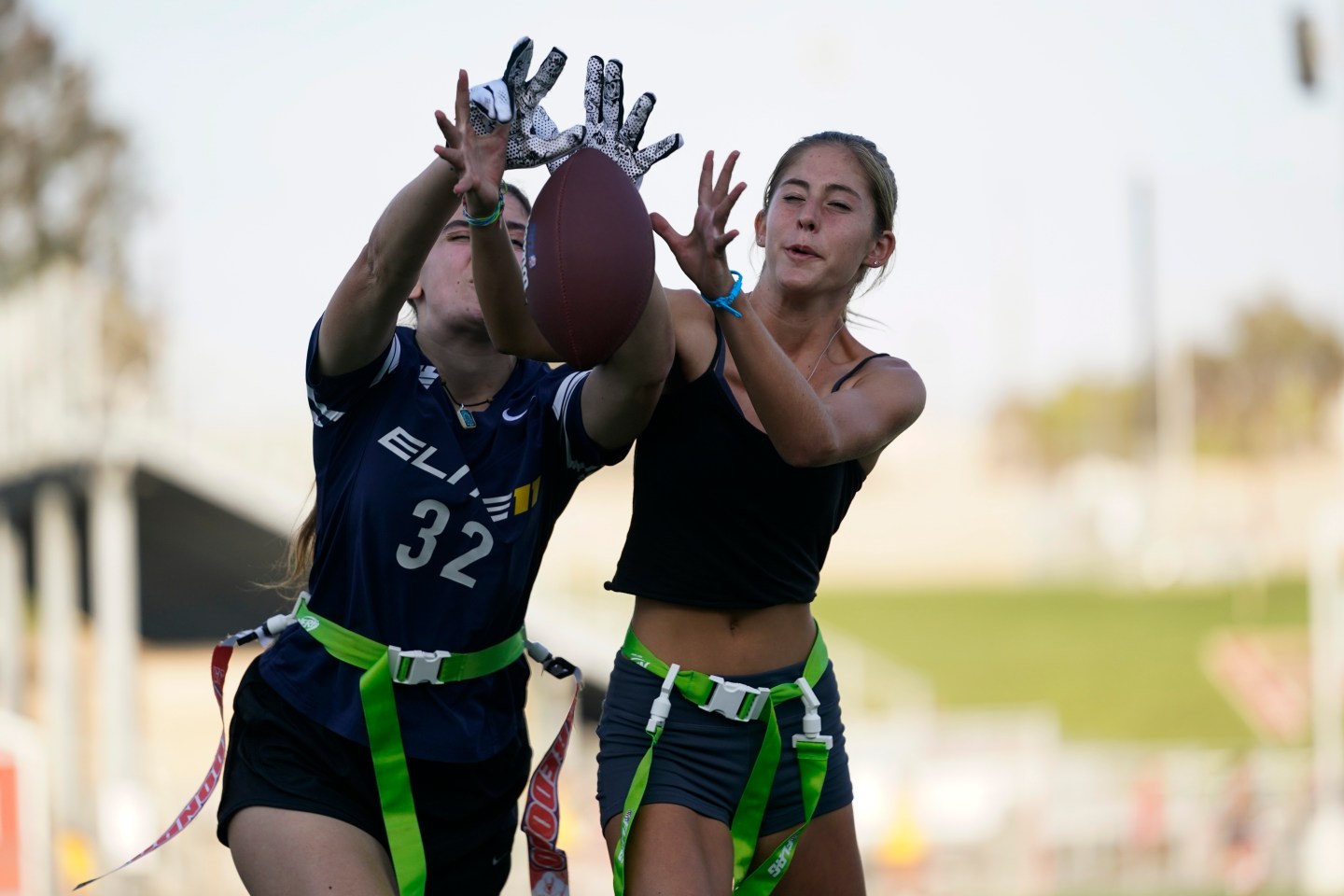 REDONDO BEACH, Calif. (AP) — Elsa Morin gripped the football and launched a perfect spiral. Then the 17-year-old dodged in and out of cones and yanked the flag hanging from another girl’s belt for a key defensive play.

Morin was among about three dozen girls who recently tried out for the school’s flag football team. The scene at Redondo’s field is playing out with increasing frequency in California and around the country as girls flag football soars in popularity.

The number of girls playing flag football in U.S. high schools doubled to 11,000 in the decade leading up to 2018-19, according to the National Federation of State High School Associations.

On Thursday, the southern section of the California Interscholastic Federation is expected to vote on making it an official girls’ high school sport. If approved, the state federation — which governs interscholastic sports in California — would take it up next month with a goal of making it an official sport in the nation’s most populous state for the 2023-24 school year.

Flag football already is a sanctioned high school girls sport in states including Alabama and Nevada. And it was added as a collegiate sport by the National Association of Intercollegiate Athletics, with colleges in Florida, Georgia, Kansas and elsewhere fielding teams.

While girls are allowed to play tackle football on high school teams in California, few do. Flag football allows them to experience the sport in a way “that has all the knowledge, skills, and ability and the strategy of traditional football without some of the more violent parts of it,” said Paula Hart Rodas, president-elect of the CIF Southern Section’s council who previously coached Lawndale High School’s flag team.

In flag football, no one gets tackled. A play ends when an opposing player pulls off the flag of a ball-carrier. It also is far cheaper than tackle football since no helmets or pads are needed.

The NFL sees flag football as a way to encourage its female fans. The Los Angeles Rams and Los Angeles Chargers started a pilot high school league during the last school year, giving many girls a first shot at playing.

“The response was quite frankly more than we were prepared for,” he said.

Jake Jimenez, coach of the team at Redondo Union, said with COVID-19 still circulating he wasn’t sure how many girls would want to play. But nearly three dozen showed up for the first tryouts last school year, and a similar number came out this year. Jimenez could only accept half of them. He hopes that once California sanctions the sport, he can build a junior varsity team and develop a pipeline of players.

“They loved being the pioneer of women in sports and girls in flag football,” he said. “We are truly trailblazers.”

He said he’d like to schedule games right before his school’s tackle football games to promote the team.

The NFL — which invited a group of pilot league flag players to join tennis legend Billie Jean King for the coin toss at the last Super Bowl — has been driving interest at the high school level. But flag football has been gaining in popularity among younger players for years, especially amid growing concern about the risk of concussions and other injuries from tackle football.

Mark Broersma, commissioner of the Friday Night Lights flag football organization in Southern California, said girls make up a fraction of the 25,000 children from kindergarten to eighth grade who play each year, but their ranks are growing.

“We see an increase in all-girls teams that roll in and play as a team,” Broersma said.

Tryouts at Redondo Union were held on a blistering afternoon. Many of the hopefuls played flag football during physical education class in middle school and hoped to score a spot on the high school’s second-ever team.

Despite the competition, the girls cheered each other on as they dodged through cones and spun by defenders trying to pull the flags. They applauded the fastest sprinter — a soccer player who decided to try something new.

The novelty is what drove 17-year-old Aly Young to the sport after she previously competed in soccer and track. Young had always loved football but didn’t go out for the tackle team, fearing she’d be injured. Then, she found flag.

In recent years, parents and health experts have raised concerns about the risk of head injuries from tackle football, particularly among developing children, with some suggesting younger kids would be safer sticking with flag. A Centers for Disease Control and Prevention study from last year, for one, found kids playing tackle football had 15 times as many head impacts as those playing flag football.

Morin is one of the few girls playing both tackle and flag. She said she fell in love with football after coming to the United States from France five years ago but was discouraged from initially playing with boys by a prior coach who’s no longer at the school.

This year, she’s a running back on the school’s tackle football team and a leader on the girls’ flag team. She rallied the girls trying out for flag even when they fumbled, reassuring them with “you got it, girl!”

She also told them about the fun they had last season when their school won the pilot league’s championship.

“We got a lot of opportunity because it was never known that girls play football,” Morin told a newcomer while tossing her the ball during warm ups. “It was dope.”