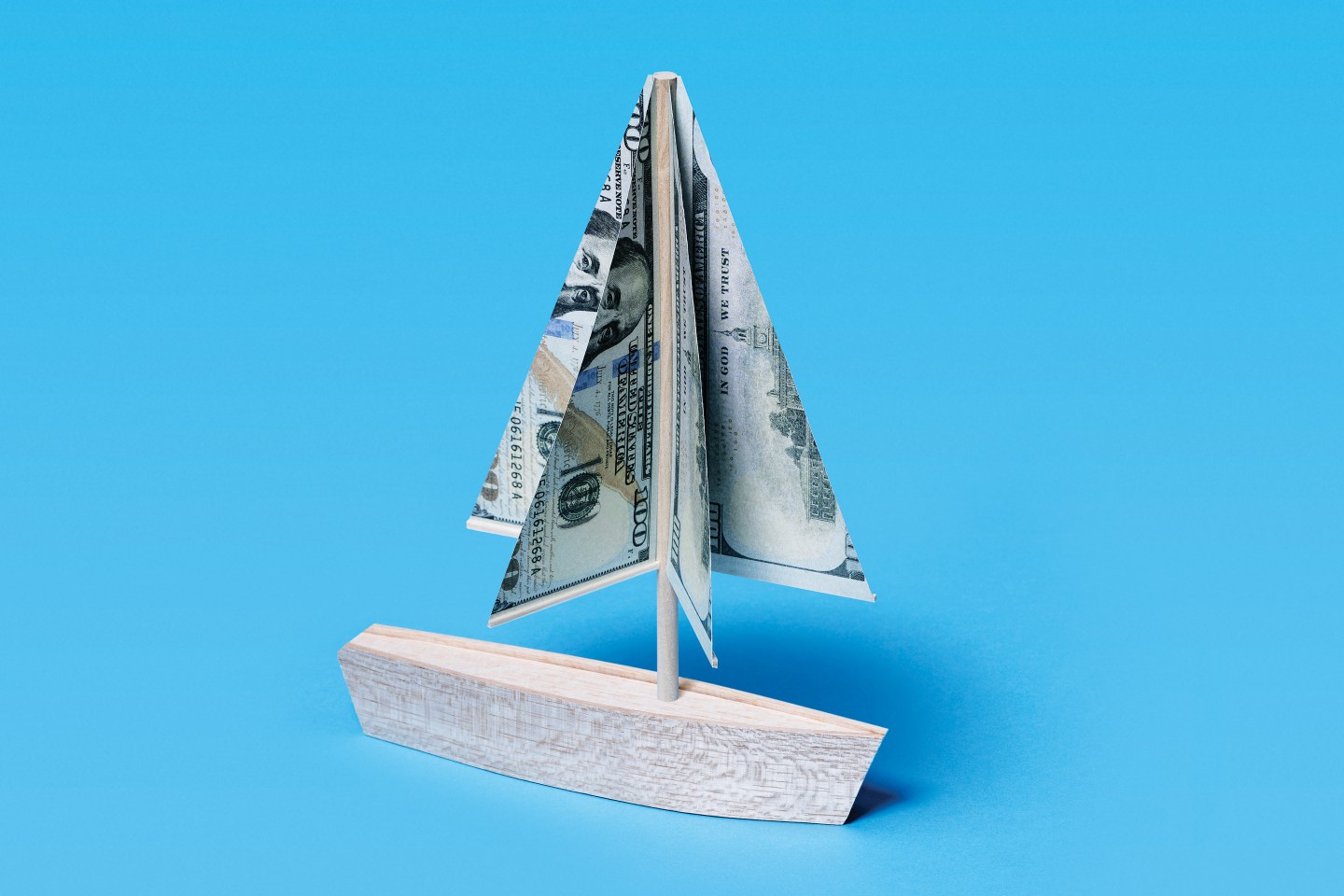 Of the three vehicles that deliver gains to shareholders—capital gains, buybacks, and dividends—dividends are the most powerful contributor over long periods. In a recent study, Hartford Funds found that from 1973 to 2021, companies that made those quarterly payments furnished annual returns of 9.6% a year, crushing non-payers’ record of 4.79% and beating the overall market average of 8.2%. Since 1930, dividend stocks have provided an outsize 40% of total shareholder gains. Yet in the past 15 years as price/earnings multiples (P/Es) exploded, driven primarily by the soaring prices of tech titans that frequently didn’t pay dividends at all, the share of gains attributable to dividends shrank by over half, to around 15%. As a result of that downtrend, investors pretty much forgot that over history, it’s the dividend payers that perform best.

Today’s tumultuous climate strongly favors those long-distance champions. To understand why, it’s important to analyze the profile of a typical dividend stalwart. These are mature, generally stable businesses that don’t have a big need for capital to invest. Their top growth stage is behind them. The best use of their earnings is channeling the cash to investors. A trademark of dividend stocks is that they’re cheap compared with the overall market, and never more so than today. They offer high earnings relative to their share prices, the formula that enables them to pay chunky yields. “Value has never been this cheap versus growth,” says Chris Brightman, CEO of Research Affiliates, a firm that oversees investment strategies for $168 billion in mutual funds and ETFs. Brightman foresees powerful tailwinds for the dividend payers that are the bulwarks of “value” in the years ahead. “Over five or 10 years, the valuations of value stocks will be ‘mean reverting,’ meaning that they’ll close the gulf with growth, and significantly outperform in the process,” he says.

We zeroed in on five stocks that hit four important boxes: a dividend yield of at least 4.5%; a P/E of around 16 or lower (versus around 20 for the S&P 500); a history of consistent earnings; and fourth, beaten-down stock prices not justified by their fundamentals.

The private equity giant spreads its $941 billion in assets under management across investments in companies, credit and insurance, and real estate. But it’s the real estate arm that’s showing the most impressive growth, and that promises to keep delivering fast-increasing cash flows in the future. In 2021, Blackstone garnered just over half of the $7.8 billion in earnings available for distribution to shareholders from the fees and performance bonuses on its sundry, high-return property funds.

Blackstone presciently exited most of its office holdings in the U.S. before the meltdown driven by the shift to remote work, and long ago dumped suburban office malls. Apartments are one of its four “highest conviction themes” in real estate. The other three are also specialties in which demand should remain strong: space for film studios that produce programs for streaming; laboratories occupied by tenants in life sciences; and warehouses that store products for delivery in the digital economy. In this last category, Blackstone typically owns the best properties closest to big population centers, where it’s difficult to get new permits.

A real estate downturn will also bring opportunities for bargains. Some of the best P/E returns of the past 20 years flowed from funds that started in 2008 and 2009, when prices cratered—and Blackstone now holds $170 billion in “dry powder.”

Dow is the largest of the three units spun off from the old DowDuPont in early 2019. It makes such basic products as packaging, plastics, industrial coatings, and architectural paints. CEO Jim Fitterling predicts that Dow’s end markets will grow at 3.3% and 5.5% from 2022 to 2025, on average a point faster than the pre-COVID rate.

Yet Dow’s share price is languishing below late-2019 levels, resulting in a tiny multiple of six. In the past four quarters, it has generated sumptuous net income of $6.6 billion, and paid out just less than one-third of that figure to provide what’s now a yield of 6%. So Dow has plenty of latitude for returning capital to shareholders. It recently announced a plan to repurchase $3 billion in stock, and did $600 million in buybacks under the program in Q1. The $2.4 billion in dry powder represents over 7% of its current valuation.

Analyst Hassan Ahmed of Alembic Global Advisors praises Dow for excellent cost management. “They benchmark SG&A [selling, general, and administrative expenses] to their peers to ensure they’re among the most efficient in every category,” he says. “They’re all about paying a chunky dividend and tightly running operations, not about empire building or pursuing expansion plans.” The stock, he adds, is screaming buy. “They’ve suffered from the overall skittish market,” he says. “But the 6% dividend is guaranteed. Their earnings are so strong that it won’t be cut even in the event of a recession. It’s trading at multiples far below where a name like this should be trading.” Few choices offer a better opportunity for a blend of rising dividends, big buybacks, and large capital gains as Dow’s multiple rises to match the P/Es of industrial giants with similar earnings and growth.

Enterprise Products is what’s called a “master limited partnership.” MLPs are required to channel a large share of their cash flow to investors. They don’t pay tax at the partnership level; instead, the shareholders are responsible for the levies detailed in special K-1 filings. Potential investors should study the tax treatment of MLPs. But in general, shareholders often pay lower taxes on MLP distributions than on regular dividends.

EPD is a relatively safe bet on the hot energy sector because its fortunes aren’t dependent on the price of oil and gas. It’s a “midstream” player that operates a network of pipelines covering 50,000 miles that transport natural gas, natural gas liquids, crude oil, and petrochemical products from producers to refineries, utilities, and plants. It features extremely low leverage, and generates high returns on capital through rough and smooth cycles. And there’s growing demand for ethylene (used in antifreeze, plastics, and solvents) and propylene. “Over the past 10 years, ethylene demand has grown at 1.2 times GDP, and propylene has increased at 1.5 times,” co-CEO Randy Fowler told Fortune.

The fruits of that consistency: 24 straight years of increasing dividends.

Huntington is a midsize bank that for dividend seekers enjoys an advantage over the Goliaths: Its 4.5% dividend yield far exceeds those of JPMorgan (3.4%), BofA (2.6%), and Wells Fargo (2.7%). Huntington has long been a powerhouse in Michigan, Ohio, and Western Pennsylvania, offering three main lines: consumer banking, auto lending, and middle market credit. Last June, it expanded into Minneapolis, Denver, and Chicago via the $6 billion acquisition of TCF Financial, growing its network to 1,000 branches across 11 states.

“Huntington pioneered a low-fee, customer-friendly model for retail banking,” says Terry McEvoy, an analyst at Stephens. “They have excellent customer retention.” Rising rates should swell the bank’s net interest income—but its revenue growth and cash flows are already robust. Over the past four quarters, it’s churned $2.6 billion in free cash flow, almost three times the dollars flowing to dividends. Huntington has almost doubled its dividend since late 2017, and raised the payout 3% in Q4 of last year. Huntington fared well in the recent Fed stress tests, suggesting it can not only maintain that big dividend, but probably also grow it.

Janus Henderson is one of two asset managers (along with Invesco) that Nelson Peltz’s Trian hedge fund is attempting to revive. The British group is the product of the 2017 merger of two midsize players, Janus Capital and Henderson Group. But the union failed to pay off. Since the merger, Janus Henderson’s assets under management have pretty much flatlined in the $300 billion range. In Q2, Janus suffered $7.8 billion in net outflows.

As a 19% stakeholder, Peltz is pushing for change: Late last year, a new CEO, Ali Dibadj, former CFO of ?AllianceBernstein, took charge, and in February, Peltz and partner Ed Garden joined the board. Peltz and Garden also believe that the asset management space is all about scale. Hence Janus could benefit either from uniting with a like-size rival or selling to an industry giant. Peltz has a strong record as a matchmaker in the field. As a big investor in Legg Mason, he orchestrated its sale to Franklin Templeton in 2000, reaping a $70 million gain in nine months.

The attraction: Though Janus’s profits haven’t grown since the merger, they’re stable—and extremely large relative to both the dividend and beaten-down valuation. In the past four quarters, it’s posted net profits of $502 million. That’s nearly twice the $260 million it paid to shareholders. Any improvement in operations that substantially raises assets under management or lowers costs could ignite a big rise in both dividends and the stock price. And like many midsize money managers, Janus is an appealing takeover candidate.?

This article appears in the October/November 2022 issue of Fortune.