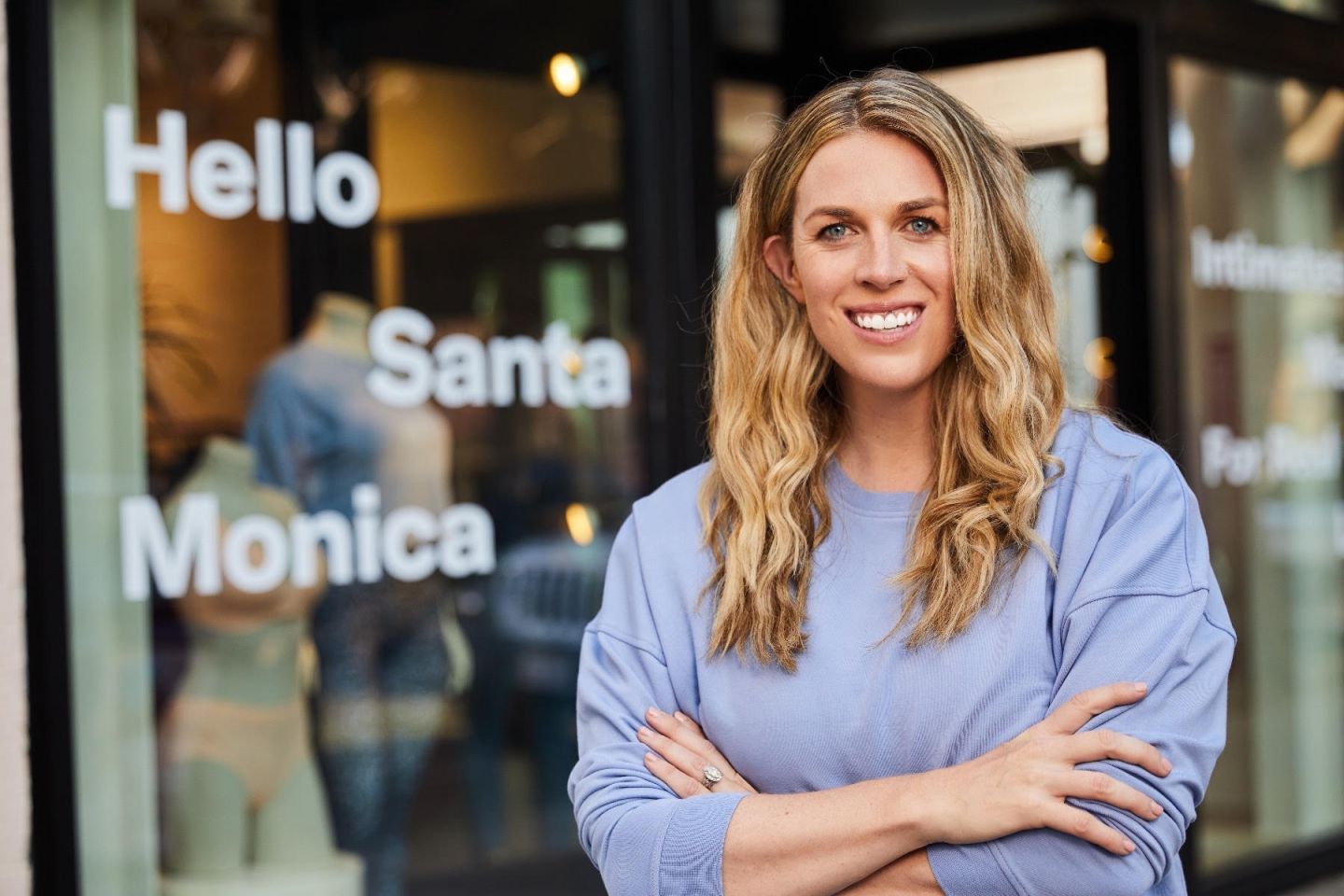 – Niche to mainstream. Who would have thought that leakproof underwear would be one of the most disruptive products to emerge in the last decade? Joanna Griffiths, founder and president of the Canadian intimates brand Knix Wear, certainly did.

“When I started working on Knix, this category didn’t exist,” says Griffiths, a former publicist at companies like Universal Music Group. She founded Knix, whose flagship products are absorbent garments meant to catch menstrual and incontinence leaks, in 2013. “Here we are 10 years later, and [menstrual underwear] is on track to become a billion-dollar category. It’s really made its way into the mainstream.”

Swedish health and hygiene company Essity recently acquired a majority stake in Knix for $320 million U.S. dollars, making it the largest publicly disclosed sale of a private direct-to-consumer brand by a female founder in Canadian history, and one of the largest sales of a female-founded brand in U.S. history. The transaction places Knix at a $400 million valuation.

Knix’s sale to Essity was unexpected, Griffiths says, because the company had just closed its series B round in May 2021. After spending a “decent amount of time” getting to know Essity’s team, she believed the sale was the right move for Knix, which will continue to operate as a standalone company.

“I’ve always said that I would make decisions that would ultimately optimize the longevity of the brand,” says Griffiths. “This felt like [the] right partner, right moment, to really solidify the future growth of Knix.”

Yet Griffiths hasn’t had an easy time selling investors on Knix, some of whom dismissed the brand as a niche product. Even after Knix started seeing growth, Griffiths still ran into issues as a female founder. When raising a series B while pregnant, she refused money from potential investors who questioned her ability to lead the company during and after pregnancy.

“I really fundamentally believed that at some point it would stop,” says Griffiths. “That was the biggest disappointment; that there are these systemic barriers and issues that exist, [and] it actually doesn’t matter how well you’re doing…they’re going to continue to be present.”

She appears to have had the last laugh. The company sells nearly 2 million pairs of leakproof underwear annually and reported net sales of $133.6 million Canadian dollars ($167.5 million U.S. dollars) in 2021. It also expanded its leakproof product line to include activewear and swimwear.

Still, the company has faced other setbacks. In April two women filed a class action lawsuit against Knix in California, alleging the company’s products contain fluorine, a chemical that indicates the presence of per- and polyfluoroalkyl substances. Known as “forever chemicals,” PFAS are used to waterproof and stainproof products and are linked to health risks including decreased fertility. Thinx, another leakproof underwear brand, has faced similar lawsuits.

Knix maintains that its products are free of PFAS and fluorine, based on third-party testing. (It also publicly shares the test results.) The company has requested sanctions against the plaintiffs’ lawyers, alleging the plaintiffs have not done their own testing, instead referencing a test made by a consumer health activist blog. Griffiths notes that Knix manufactures its leakproof materials in Europe, where regulations on PFAS are more stringent than in the U.S., but the news hasn’t been received warmly online. One TikTok video discussing the lawsuits against Thinx and Knix has received over 1 million views since it was first posted in June.

“Things get decided in the court of public opinion,” Griffiths says about the social media response. “It’s unfortunate because I think being open and transparent about this is what put a target on our back in the first place.”

As for her next steps after selling 80% of Knix, Griffiths will continue running the company as president (she controls the remaining shares) and raising her three young children. She also plans to ramp up her investments and mentorship of female and minority founders. She sits on the board of the Canadian nonprofit Futurpreneur, which gave Knix one of its first loans, and she’s invested in startups like the waterless haircare brand Everist.

“I’ve been pretty open and honest about what the journey is really like as an entrepreneur,” she says. “One of the best ways you can give back is just letting someone know that they’re not alone in the way that they’re feeling, that nobody has all the answers, that it’s hard, and that you’ll get through it.”

- Shedding light. Recently unredacted court documents for a class action lawsuit against Goldman Sachs include over 75 allegations of sexual misconduct, including rape, from bank employees. The lawsuit, which features allegations from over 1,400 plaintiffs between 2000 and 2011, is set to go to trial next June. Fortune

- Have it both ways. Delta sustainability chief Pamela Fletcher, who joined the company last autumn, is tasked with helping the airline hit net-zero emissions by 2050. Her primary focus is on exploring new paths for sustainable jet fuel and sourcing more fuel-efficient engines—jet operations make up 98% of Delta’s emissions—without curbing air traffic. “We don’t believe you have to choose between seeing the world and saving the world,” she says. Fortune

- War crimes. A UN-appointed panel of legal experts has found that Russian soldiers committed war crimes during the country's ongoing invasion of Ukraine. In an 11-minute statement read on Friday, the panel found that soldiers committed sexual and gender-based violence against victims ranging from ages four to 82. New York Times

- Grand reentrance. Rihanna is officially set to perform at the 2023 Super Bowl Halftime Show, which draws one of the largest TV audiences annually. It marks the first TV appearance for the singer in years. Rihanna hasn’t released a new album since 2016. Hollywood Reporter

- On the bench. Boston Celtics coach Ime Udoka has been suspended for the full 2022-23 NBA season for an unauthorized relationship with a female member of the organization. While team leadership was first informed of the relationship in July, an investigation was launched after the woman accused Udoka of making unwanted comments toward her. Athletic

- Back to the 19th century. An Arizona judge reinstated the state’s near-total abortion ban originating from 1864, which includes a two-year to a five-year prison sentence for anyone who helps someone get an abortion. New York Times

“Because they have nothing to lose, they are standing up and saying, ‘Enough of this. I am willing to die to have a life worth living.’”

-Iranian human rights lawyer and women’s rights activist Shadi Sadr on the widespread protests in the country following the death of a 22-year-old woman.