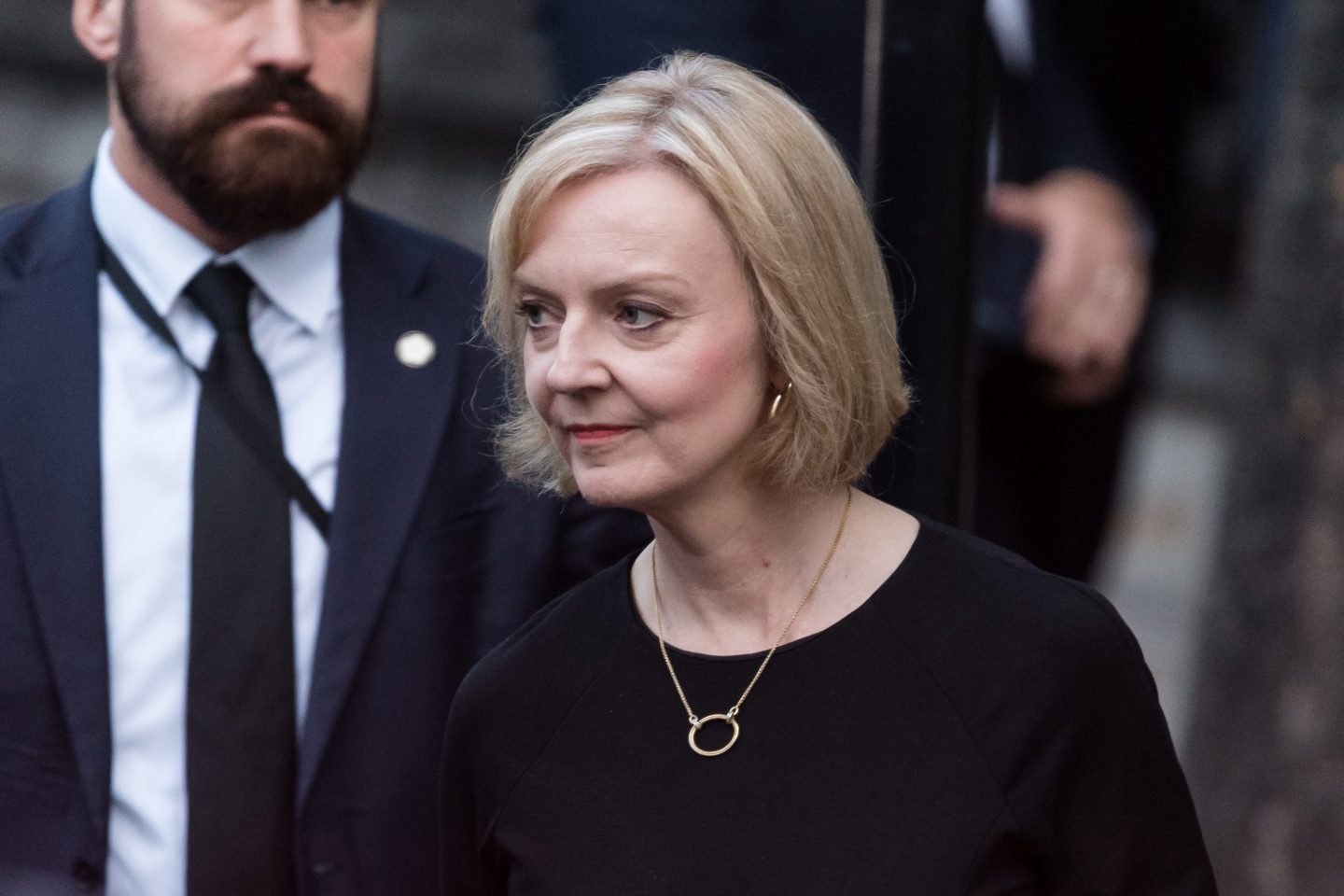 The market selloff that followed the release of the UK government’s fiscal plan extended into a new week, heaping the pressure on Liz Truss’s days-old administration.

Kwasi Kwarteng’s all-out gamble on tax cuts and extra borrowing to stimulate the economy sparked a ferocious and damaging assessment from investors on Friday that sent UK assets tumbling. Seemingly unperturbed by the response, the Chancellor this weekend pledged even more tax cuts.

When markets reopened in Asia on Monday, the slump showed few signs of abating, as the beleaguered pound dropped to a fresh 37-year low against the dollar. If the rout continues to deepen as traders continue to deliver their real-time verdict this week, the selloff risks moving beyond a short-term embarrassment for the government into a more profound crisis that could necessitate a rapid policy response.

With the pound sliding as much as 0.9% to below $1.08 on Sunday night, the opening of the gilt market at 8 a.m. on Monday will also be one to watch.

“With broad unfunded spending on the fiscal side unmatched by monetary policy to offset the inflationary impulse, the currency is likely to weaken further,” Goldman Sachs analysts including Kamakshya Trivedi wrote in a note to clients on Friday.

In a sign of the historic severity of Friday’s selloff, the pound at one stage was set for its worse day against the dollar since the record crash that followed the Brexit vote in 2016. In the end, the 3.6% slump was the seventh-worst in the past 50 years. At the same time, government bond yields soared, by a record amount on some maturities, as investors punished the Chancellor for his unapologetic dash for growth.

If maintained, the move in yields will dramatically inflate the cost of the extra £400 billion ($434 billion) of borrowing the Resolution Foundation estimate is needed over the next five years to fund the plan, adding to an interest bill already bulging thanks to sky-high inflation and Bank of England rate increases.

The market moves this week could have huge implications. The Telegraph reported Saturday that Truss will face a rebellion from Tory backbenchers against her tax cuts if the pound falls to parity with the dollar. Meanwhile, some in the markets are already calling for emergency BOE action to stem the tide, an unprecedented action in modern times that would risk adding to the sense of panic.

Former BOE official Adam Posen said on Twitter that he expects Bailey to “say publicly by mid-week that if GBP down, rates up.” He also mentioned the possibility of Treasury intervention to prop up the pound on Sunday before the open, but others pointed out that Britain’s foreign currency reserves are a fraction of those of the likes of Japan, which pursued the same policy last week.

If the weekend break has brought some calm, and moves start to retrace on Monday, that will buy Truss and Kwarteng time to try to seize back the agenda. That would increase the importance of the Tory Party Conference early next month, which now risks turning from a coronation of the new government into a chance to restore already-battered credibility.

But the outlook from many in the market is far from rosy. The turmoil last week led to more predictions, including from former US Treasury Secretary Lawrence Summers, that the pound will decline below parity with the dollar. Bloomberg’s options pricing model now shows a one-in-four chance the pound will reach $1 in the next six months, up from 14% on Thursday.

Others are expressing concerns over the future of UK debt. Worryingly, the central bank support through quantitative easing, previously a savior of gilts, has now been thrown into reverse by officials looking to keep a lid of runaway price gains.

“The gilt market is adjusting to a seismic shift in the fiscal landscape and a mammoth supply-demand outlook,” HSBC analysts wrote in a note on Friday. “The return of such large-scale borrowing of this nature comes at the same time as the BOE is also turning from a buyer to a seller of bonds, and — more importantly — other investors are increasingly concerned about the UK’s fiscal credibility.”

After Kwarteng’s speech on Friday, the pound slumped, yields on 10-year debt rose more than 30 basis points to 3.83%, and the rate of five-year notes jumped by a record 51 basis points.

Meanwhile traders fully priced 120 basis points of additional rate hikes from the BOE by its Nov. 3 meeting — more than double the size of the move announced on Thursday that took rates to 2.25%. Traders are also now pricing in the possibility of an intra-meeting hike, according to Trevor Pugh, head of gilt inter-dealer broker and agency desks at Tradition Ltd.

Following the event, the new Chancellor denied investors were panicking, telling the Financial Times that “markets move all the time — it’s very important to keep calm and focus on the longer-term strategy.”

For now, the market’s view of that strategy appears dim.

“Unless something can be done to address these fiscal concerns, or the economy shows some surprisingly strong growth data, it looks like investors will continue to shun sterling,” ING’s Antoine Bouvet and Chris Turner wrote on Friday.  “Given our bias for the dollar rally going into over-drive as well, we think the market may be underpricing the chances of parity.”