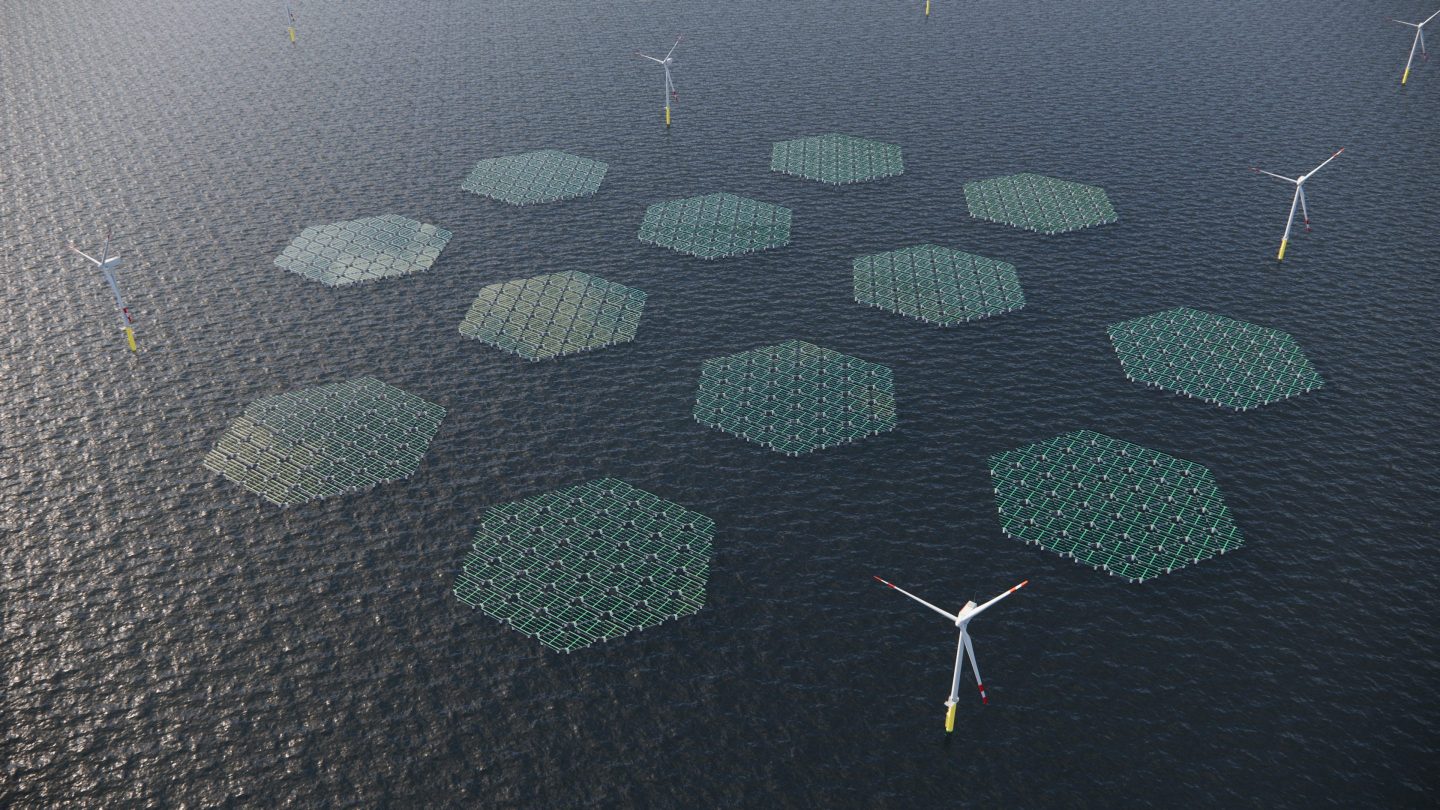 Dutch aerospace engineer Olaf de Swart wanted to work in renewable energy after graduating from the Delft University of Technology in 2009 with a specialty in flexible solar modules, but the Great Financial Crisis had other plans. After the Lehman Brothers crash, the only job he could find was as a project engineer at Damen Shipyards. Shipbuilding was one of the few industries not paralyzed by the financial collapse. Though his “passion was elsewhere,” he took the gig.

Even as he worked on ships, de Swart never stopped thinking about energy. At the time, offshore floating windmills and tidal energy structures were starting to crop up. The cost of solar energy was still high but starting to come down. “I saw that solar energy had nothing holding it back to become the cheapest energy source on the planet,” he says. Five years into his Damen job, de Swart asked a question that fused his scientific passion and everyday work: “Why can’t we put this on the sea?”

De Swart received a small budget from Damen in 2017 to investigate his idea, but when he applied for it to be as part of Damen’s innovation program—code-named “Morpheus”—in 2018, the shipbuilder passed on developing offshore solar panels in-house since the concept was outside its core business and could compete with its energy industry clients. Damen’s decision motivated de Swart and several Damen colleagues to launch their own offshore floating solar energy park business called SolarDuck.

Today, the startup is partnering with German energy firm RWE to build a pilot floating photovoltaic (FPV) plant that will open in the Belgian North Sea next year. The plant will be one of the first truly high-wave offshore plants and the first to use a unique triangular design that should help it weather heavy seas—one of the great obstacles to offshore solar installations.

The 0.5 Megawatt peak (or MWp, a measure of the maximum potential power output) pilot project will mark a major step in proving that offshore solar farms can provide reliable and cheap energy for land-scarce countries in Asia, Europe, and the Caribbean. (SolarDuck declined to reveal the project’s cost; RWE will “invest” in the project, the German firm says.)

“We focus on countries which don’t have the space to build solar on a large scale, so they cannot profit from the low electricity prices that solar energy can bring,” says de Swart. “And in these countries, if you look at where most of the population is located, it’s in what we call the sunbelt region around the equator.”

Fossil fuel-triggered climate change and the energy crisis caused by Russia’s invasion of Ukraine have underscored the need for more creative renewable energy generation. The question is whether offshore floating solar parks can move from the theoretical to the efficient and useful.

“Offshore floating PV is unlikely to take off mainly because it is a tougher environment with challenges related to salt water, waves, tidal level changes, and seasonal typhoons,” says Victor Signes, a renewable energy analyst at Rystad Energy.

But the difficulty of finding apt sites for renewable energy in mountainous or thickly populated countries like Japan, and in isolated island and costal nations, like those in the Caribbean, makes the idea of offshore solar parks an attractive entrepreneurial endeavor.

“If we’ll be able to take that out to sea, that will open a whole new frontier,” says Koen Burgers, a former Damen executive who left the shipbuilder to become the startup’s CEO.

Investors are betting that the Dutch-Norwegian SolarDuck can make offshore solar work. It raised a $4 million round earlier this year, and its investors include Damen, Link Venture Capital and the Norwegian accelerator Katapult Ocean. Burgers declined to disclose the company’s valuation.

Floating solar parks began to pop up about 15 years ago and have grown steadily since, mainly on inland bodies of water—either lakes or reservoirs—with hydroelectric dams that are already hooked up to the grid.

“Floating solar has seen strong growth over the past three to five years [and] has the potential to become the third pillar of the photovoltaic industry, next to ground-mounted and rooftop solar,” says Thomas Reindl, deputy CEO of the Solar Energy Research Institute of Singapore (SERIS). “Just covering 10% of all man-made reservoirs in the world would lead to installation capacities in the range of around 20 terawatts, which is 20 times more than the global cumulative installed solar photovoltaic capacity today.”

Floating solar panels offer three main advantages, says Signes from Rystad. First, the solar panels are more efficient because the water below keeps them cool. Second, it is easier to get permits for already “artificialized” areas, like spent quarries’ hydroelectric dams, in part because there are few NIMBY (Not In My Back Yard) objections from local residents. And third, mixing floating solar plants with existing wind and hydroelectric plants achieves economies of scale in terms of infrastructure costs.

Courtesy of the World Bank

Globally, floating solar’s installed capacity is expected to hit 24 gigawatts (GW) by 2030, growing from 2.7 GW at the end of the first half of 2022, mainly led by Asia, according to Rystad. Its potential is far greater: the U.S. Department of Energy’s National Renewable Energy Laboratory (NREL) estimates that adding floating solar power to existing hydropower reservoirs could supply almost half of current global electricity demand.

SolarDuck’s founders started working on the company from within Damen Shipyards, but de Swart and SolarDuck engineering head Ewoud Huiskamp left in 2019 and spun out the company in mid-2020. De Swart’s supervisor Don Hoogendoorn, now SolarDuck’s CTO, and Burgers left Damen and joined full-time in 2021.

The founders designed triangular solar panel platforms with semi-submergible floats that when linked together—six triangular platforms joined at their apex form a hexagon—would be more flexible and have more axes on which to rotate than the usual rectangular variety, and thus be better suited to heavy waves and ocean currents. Signes says the design offers “higher stability.” RWE, the German utility working with SolarDuck on the pilot, says the North Sea solar farm will “float several meters above the water, following the waves like a carpet.”

SolarDuck CEO Burgers says the floating platforms—the triangles are more than 30 meters a side—are being designed to withstand waves that reach 14 meters in height. By comparison, in 2020, the world’s first high-wave offshore solar project, from Oceans of Energy, was praised for riding out 5-meter waves. That project has since endured 10-meter waves and it designed to face up to 14-meter ones, the company says.

SolarDuck and RWE’s North Sea pilot installation—comprised of six triangles joined into one hexagon—is slated to open next April with a capacity of 0.5 MWp. For their next step, the two companies plan to connect a SolarDuck offshore 5 MWp floating solar plant—made of some 70 triangles—to a RWE wind farm that the utility is bidding to build 53 kilometers off the Dutch coast. Mixing the two energy sources is attractive for future installations because “wind and solar are complementary,” says Evan Rosenlieb, an NREL technical lead on floating solar work. “It tends to be windier at night.”

The 5 MWp floating plant would be larger than any high-wave offshore farms that currently exists, though Oceans of Energy plans to scale up to 15 MW in its next round of growth. The largest installed offshore floating solar project to date is a 181 MWp farm near Taiwan, but it is in a sheltered near-shore location.

“Floating PV enables the expansion of renewable energies without the use of additional land and that is in our particular interest. Particularly in combination with an offshore windfarm,” said an RWE spokesperson.

For SolarDuck’s Burgers, the doubts about the cost-effectiveness of offshore solar are understandable—but he’s confident solar can overcome those doubts like wind has.

“Wind was taken offshore 20 or 25 years ago and people thought it would be too expensive,” he says. “Now they are subsidy-free.”