Inside the beauty R&D lab being built in the cloud 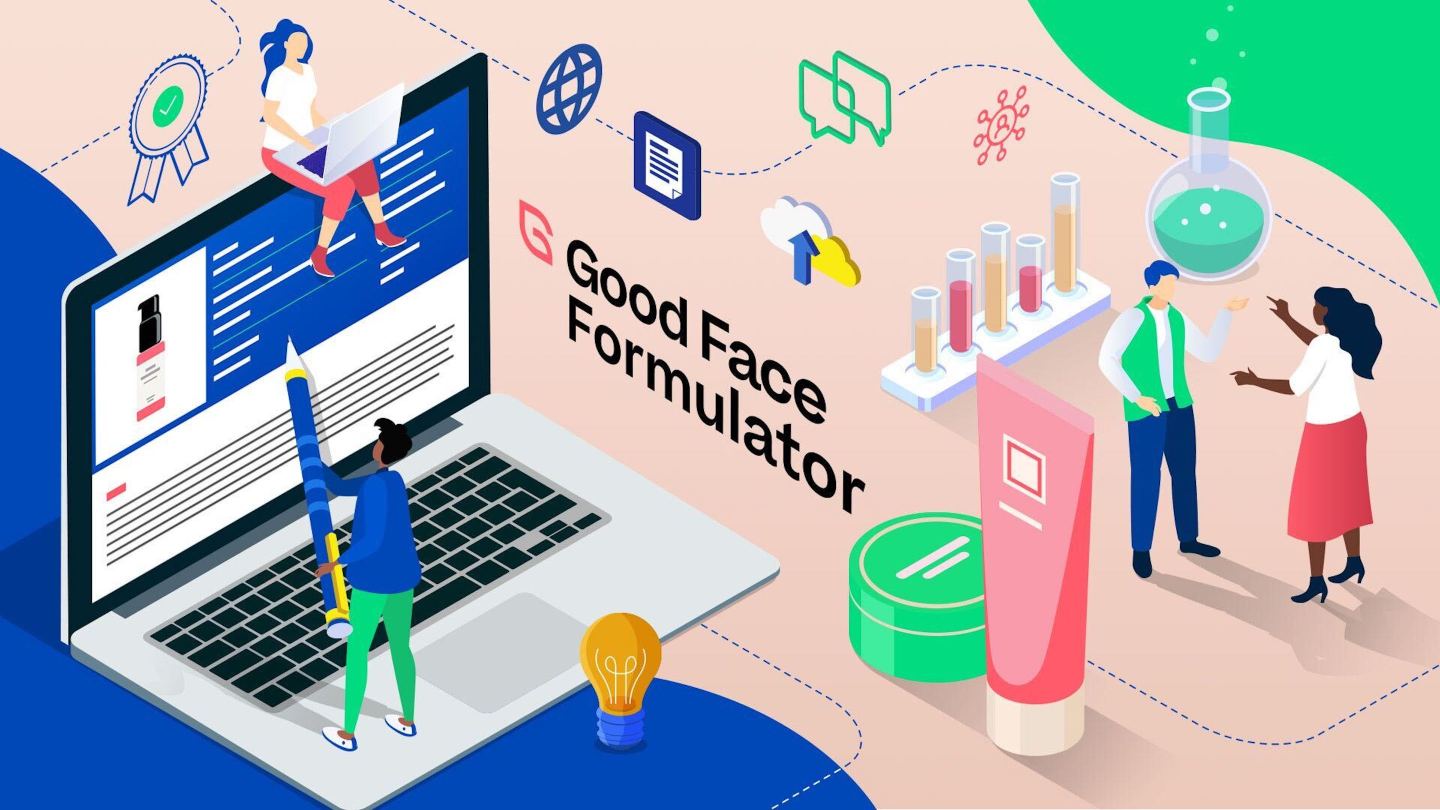 It was 2017, and Iva Teixeira had just left a job in healthcare technology when she stumbled across a massive issue plaguing a booming industry. She was working as an independent consultant for a very large, U.K.-based beauty company and was tasked with figuring out why customer retention was so low. In speaking with consumers, Teixeira expected to hear complaints over cost, accessibility, or even efficacy; instead, she was met with a long list of questions.

“They wanted to know what glycolic acid was, when to use vitamin C, whether they could go into the sun after using toner, and if they should share their moisturizer with their daughter or son,” she recalls. “And the questions were not just about the ingredients but also about the impact that those ingredients would have on their overall health.”

Teixiera was struck by how widespread the confusion was, and she realized the industry was in dire need of more transparency. The clean beauty category was beginning to take off, and customers wanted to know which ingredients would offer the best results for their skin without harming the environment along the way. Yet there was nowhere to find this information all in one place. Teixiera shared this discovery with Lena Skliarova-Mordvinova, a data scientist she’d recently befriended, and the two decided that if there wasn’t a unified, trusted source for consumers to learn about the science behind their skin care, they would build one.

Teixiera and Skliarova-Mordvinova knew that this research was available within the scientific community and its publications, but each ingredient seemed to exist in a vacuum, without any insight into how they would interact when ultimately combined in a product. “So our idea for a database quickly became more of an ontology because it was really this big web of ingredients that are all connected,” Teixiera says. “We wanted to create something that could constantly learn from other data points around it.”

She and Skliarova-Mordvinova spent the next few years building the platform, referring to more than 60 independent scientific databases around the world, and in 2018, they debuted the Good Face Index, the first launch for their company, the Good Face Project. The Index, which analyzes the safety and efficacy of roughly 100,000 ingredients in over 76,000 products, was an immediate success. But even with the consumer-facing app completed, the cofounders remained uncertain about how to add value to the other side of the beauty industry: the brands creating products and the retailers selling them.

“’Clean beauty’ was becoming a very polarizing term because there was no real agreement on what was good and what was bad,” Tiexiera explains. “And a rift was forming between consumers, who were asking more and more proficient questions about ingredients, and the cosmetic chemists in the research and development departments actually creating the products, with retailers intermediating the whole thing.” The cofounders wondered what exactly was happening on the product formulation side and why this part of the industry was so stymied, even as beauty was experiencing exponential growth.

They discovered that R&D, the most essential part of the business, was severely underfunded, with only 3% of overall expenditure going toward it. “Many chemists were literally creating and storing formulas in Excel spreadsheets,” Tiexiera says. “It was shocking that this industry, which needed to become more scalable and more transparent, was relying on an such an under-resourced department and outdated technology.”

The Good Face Project cofounders knew something needed to change and that they were just the people to do it. “Because our focus is so much on the individual molecule and its properties and applications, we realized we were perfectly suited to create a tool that would enable cosmetic chemists to basically drag and drop different ingredients and optimize their formula,” Tiexiera explains.

Using the Good Face Formulator, as it would soon be called, chemists could search for ingredients according to their specific needs and goals—be it for a brightening toner that’s less than $14 an ounce or for a noncomedogenic moisturizer that will work well for melanated skin—and build their formulas with the tool’s science-backed insights and suggestions in mind. “It takes their work to a level that they were never before able to reach, so they can actually focus on the real value-add innovation rather than the run-of-the-mill formulation,” Teixiera adds.

After repurposing their cloud-backed technology to fit the new product, Tiexiera and Skliarova-Mordvinova launched the Good Face Formulator in early 2021. “It’s only been 18 months, and we’re already gaining a new customer every other day, from Fortune 500 companies to smaller, fast-growing brands,” the cofounder and CEO says.

One such customer is Hero Cosmetics, a five-year-old acne-focused skin care line recently acquired by Church & Dwight. The brand, which started working with the Good Face Formulator earlier this year, had, like so many others, always used Excel to build and store its formulations. So, when the Hero team heard about the Formulator’s ease of implementation and impressive formula creation and record-keeping abilities, they jumped at the opportunity to use the tool. And roughly six months later, the decision has already proved integral to the brand’s operations.

“The Good Face Project’s ‘clean’ beauty functions have significantly reduced the time we spend tracking formula compliance against retailer lists,” says Tarek Nasser, senior manager of global regulatory affairs at Hero. But it was the Formulator’s other set of offerings that was of particular interest to the skin care brand.

In addition to the formulation side of the platform, the Good Face Project’s tool allows users to monitor more than 300 regulatory standards and see how their products measure up. “Traditionally, brands would have to get their formula made in in a lab, have it screened for regulatory compliance in a completely different department, and then they would apply to sell the product in Europe, Australia, or wherever they were planning to launch it,” Tiexiera says. “But what’s happening as of late is that the speed at which regulatory restrictions are evolving is reaching a bit of a crescendo, and more ingredients are getting banned or changed by the day. Regulatory chemists simply can’t keep up anymore.”

With the Formulator, however, all product creators need to do is indicate which regulations the formula needs to comply with, and if they drag and drop an ingredient that isn’t registered or okay to use in that region, the tool will alert them then and there. “Once you’ve spent so much time developing a formula and a prototype, the last thing you want to do is go back to the drawing board,” Tiexiera adds.

But the tool’s focus on regulatory matters doesn’t stop there; it also includes standards enforced by retailers, for certifications like EWG Verified and the “Clean at Sephora” seals. “I don’t see any signs of the clean beauty trend subsiding, and Hero wants to be considered ‘clean’ with as many retailers as possible,” says Nasser, noting that manually tracking formulas against these many retailers’ disparate lists and keeping up with frequently changing ingredient policies has been burdensome for the brand. “But the Good Face Formulator can generate detailed reports on formula compliance with dozens of retailer ‘clean’ lists with ease.”

Using the tool, Hero has not only significantly reduced the time it spends tracking formula compliance, but it’s also eliminated the need to devote resources to tracking changes in retailer lists and updating them in internal databases. “The question of ‘Is this product clean?’ is no longer an invitation down a rabbit hole—we have access to clear reports that have already done the analysis for us with information that can be easily communicated to retail customers,” Nasser adds.

A multi-platform breakdown of the Good Face Formulator.
Courtesy of The Good Face Project

And although the Good Face Project was born of a need to make clean beauty more transparent and its standards more universal, the company has since grown to include many brands and retailers outside of the category. “We now have customers who will never brand themselves as clean beauty, but they’re formulating in a way that still aligns with today’s and tomorrow’s consumers, who are looking to buy from transparent brands and manufacturers,” Tiexiera explains. “Our job is not to tell anyone how to engage with their consumer base; our job is just to make their ethos and their strategy faster and easier to scale.”

Since it launched, the Good Face Project’s aim has always been to simplify the beauty industry, whether for consumers through the Index or for brands and retailers through the Formulator, but the cofounders believe their cloud-backed platform may ultimately have many other uses. “We don’t look at ourselves as a cosmetics technology company but instead as a chemistry informatics company,” Tiexiera says. “We are really embedded in data science, and a huge portion of our algorithms is actually applicable to the whole world of chemistry.”

As the company grows, she and Skliarova-Mordvinova plan to take the tools they’ve built to other sectors in need of more transparency and ease of formulation. “Cosmetics is our first vertical, but our technology is very scalable and capable of building out ontologies for the worlds of supplements, of agriculture, of chemicals used in textiles and in fashion, really anything that has a chemical formula,” Tiexiera says. “But the truth is, we would never have been able to do any of this without the cloud. Having that kind of access and innovation has made the whole thing possible.”