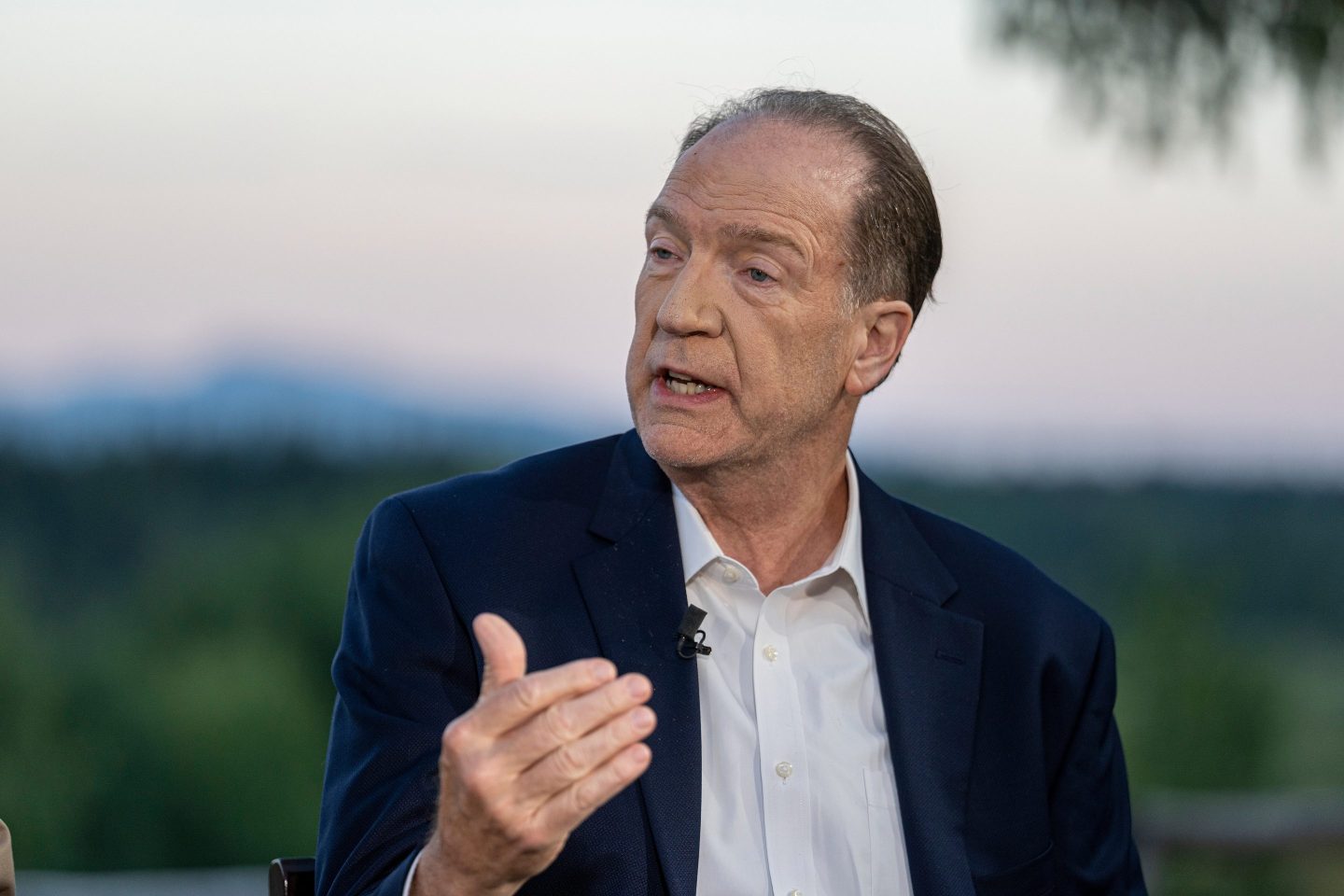 David Malpass, president of the World Bank, speaks during a Bloomberg Television interview at the Jackson Hole economic symposium in Moran, Wyoming, US, on Friday, Aug. 26, 2022.
Paul Morris/Bloomberg via Getty Images

Inflation is raging in countries around the world, from the U.S. to Australia. And the World Bank is warning that in an attempt to rein in skyrocketing prices, central banks could cause some serious pain for consumers.

“The world may be edging toward a global recession in 2023,” World Bank researchers wrote in a new study published on Thursday.

Their argument is based on the idea that the global economy has slowed dramatically this year, but at the same time, the world is experiencing one of the most dramatic episodes of monetary and fiscal policy tightening of the past five decades as governments and central bank officials around the world battle inflation simultaneously.

On the monetary side, central banks are raising interest rates and pulling liquidity from markets in order to reduce consumer prices. For example, in the U.S., the Federal Reserve has raised rates four times this year amid inflation rates not seen since the early 1980s.

And according to the World Bank, if supply disruptions and labor-market pressures don’t subside soon, officials may need to continue their rate hikes through 2023 until average global interest rates hit almost 6% to control core inflation—which excludes volatile food and energy prices.

The researchers argued that these policy changes are “necessary to contain inflationary pressures” over the long-term, noting that previous recessions have shown the dangers of allowing inflation to remain elevated during periods of fading economic growth. In the 1981-82 recession, for example, more than 40 nations experienced debt crises and sinking economic growth that lasted over a decade.

“Recent tightening of monetary and fiscal policies will likely prove helpful in reducing inflation,” Ayhan Kose, the World Bank’s Acting Vice President for Equitable Growth, Finance, and Institutions said in a statement. “But because they are highly synchronous across countries, they could be mutually compounding in tightening financial conditions and steepening the global growth slowdown.”

A global recession, however, doesn’t mean all countries will suffer equally. And World Bank President David Malpass added that he is worried that this will have devastating effects on developing nations.

“Global growth is slowing sharply, with further slowing likely as more countries fall into recession. My deep concern is that these trends will persist, with long-lasting consequences that are devastating for people in emerging market and developing economies,” he said.

The World Bank has slashed its global economic growth forecast multiple times this year and now expects global gross domestic product (GDP) growth of just 2.9% in 2023—a stark drop from the 4.1% jump it had anticipated in January.

However, if central banks are forced to raise interest rates to 6% on average globally, and financial markets continue to underperform, global GDP growth could slow to just 0.5% in 2023, the World Bank’s new study shows.

To avoid that kind of dramatic contraction, Malpass makes the case that governments will have to not only reduce demand by raising interest rates, but also increase supply by investing in production.

“To achieve low inflation rates, currency stability and faster growth, policymakers could shift their focus from reducing consumption to boosting production. Policies should seek to generate additional investment and improve productivity and capital allocation, which are critical for growth and poverty reduction,” he said.

And while the World Bank’s new study makes some bearish predictions, it also found that a recession isn’t guaranteed.

Central bank officials could cool inflation without sparking a global recession, according to researchers, by raising rates slowly and clearly communicating policy decisions, as long as governments continue to invest in increasing supply and provide relief for those most affected by rising prices.

The new warning and recommendations from the World Bank follow pessimistic comments made by Malpass back in June.

The former Bear Sterns chief economist warned that month that “stagflation”—a toxic economic combination of low growth and high inflation—could rear its head as inflationary pressures, from the war in Ukraine to COVID-19 lockdowns in China, continue to wreak havoc on the global economy.