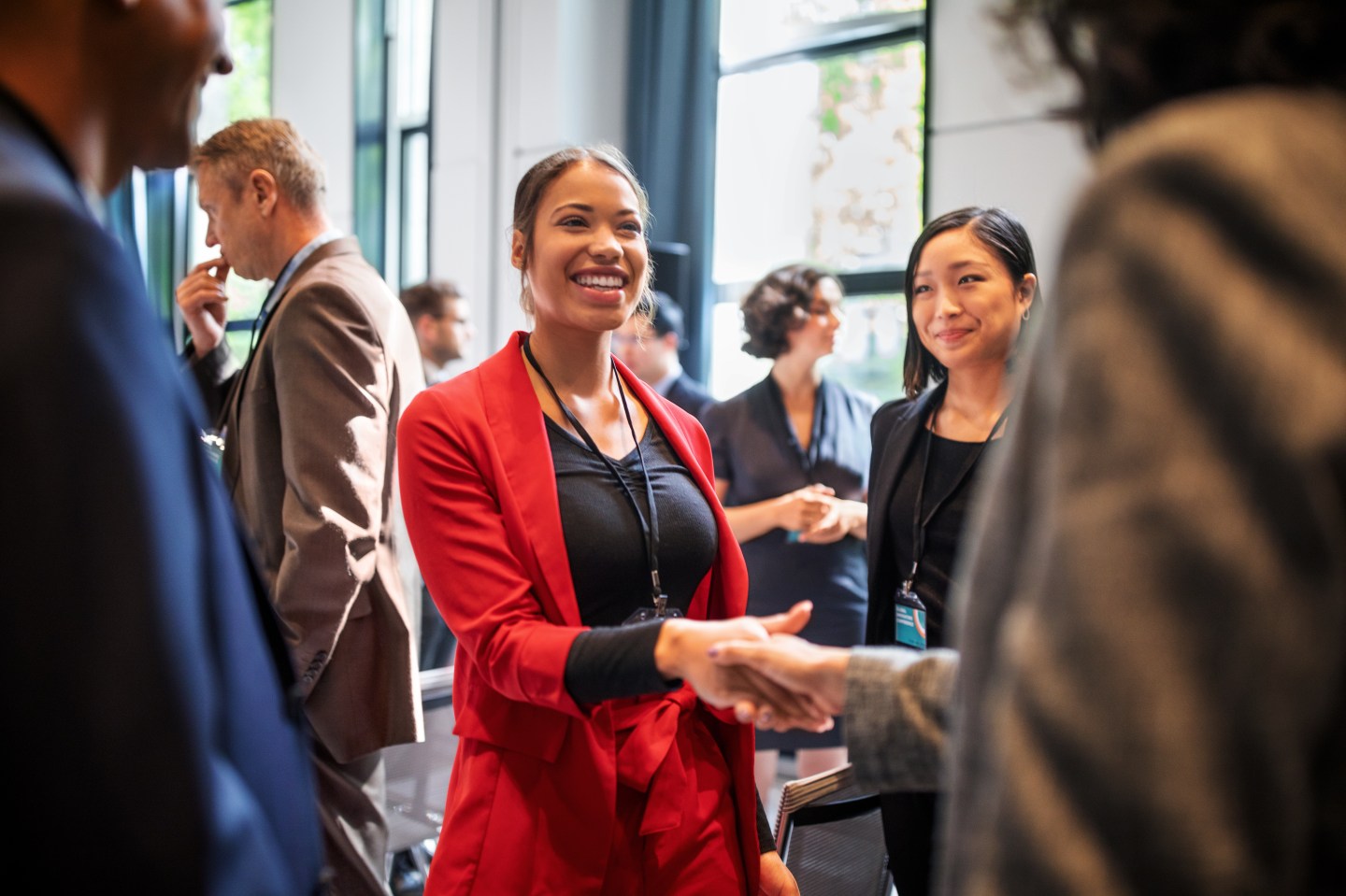 Management Leadership for Tomorrow (MLT), a national nonprofit dedicated to fostering economic equity through inclusive leadership, has announced an expansion of its groundbreaking MLT Black Equity at Work certification program to meet the specific needs of Hispanic talent.

It’s all been years in the making, says Crystal Lynese Walker, senior director, Racial Equity at Work, for MLT.

“We have more than two decades tackling issues facing Black and Hispanic talent,” as consultants and leadership experts, she says, so companies who seek to be certified get the benefit of those insights in the form of an external support team, along with surveys, benchmarking tools, webinars, supplier diversity assistance, and a scorecard that lets them chart their progress over time. “My current job is to work closely to take the framework that’s been successful with the Black Equity at Work certification and apply the best practices to the nuances of the Hispanic community space.”

To become certified, organizations are required to adopt a cross-functional, stakeholder approach and must bring themselves “up to code” within five pillars that, if addressed, are shown to drive equity within a culture: representation, compensation, workplace culture, business practices, and contributions and investments. (Certification costs range from $25,00-50,000 and are based on company revenue. More on the pillars here.) It requires the full participation of senior leaders, often including board members, and takes the responsibility of implementing change away from human resources, where inclusion typically lives—or goes to die.

“We’re tackling diversity, equity, and inclusion—and more specifically—racial equity in a very robust way that’s no longer siloed,” says Walker. And no surprises. “Senior leadership approves the plan and makes sure the resources are available before we move forward.”

The initial certification idea was born out of a familiar frustration during a terrible time, says Jonah Edelman, longtime education advocate and co-founder of Black Equity at Work.

“So, after reading the umpteenth statement following George Floyd’s murder, most of which felt marketing-driven to me, I read [Ford Foundation President] Darren Walker’s piece in the New York Times [Are You Willing To Give Up Your Privilege?] and it kind of crystallized the frustration that was growing in me,” says Edelman. There was no reason to believe that anything was going to be different without comprehensive, systemic change. “So, I just reached out to [MLT founder] John Rice, who I grew up with…and said, you know, we need a LEED-equivalent certification for Black equity.” The standards and protocols were developed with experts from Boston Consulting Group and others.

The final product is all about rigor, says Edelman. It’s a word he uses a lot.

“Rigor means root cause analysis activities that align with root causes, targets, KPIs, progress monitoring, and then indicating where the owner is. Just like any other business plan,” he says.

“In the summer of 2020, Target established the Racial Equity Action and Change (REACH) committee to accelerate our diversity, equity, and inclusion efforts for our Black team members, guests, and communities,” she says via email. “The Black Equity at Work certification has helped us rigorously benchmark and analyze our progress, identifying areas of strength and opportunities for growth.” Some 28% of Target employees currently identify as Hispanic or Latino, and she expects the Hispanic Equity at Work certification will help them reach hiring, retention, and advancement goals, among other things. It’s a new muscle. “This focused [certification] approach provides a model for how to center efforts on other segments of our team, including Hispanic and Latino communities.”

Among the cultural nuances that employers can expect are discussions of immigration issues and DACA status, when relevant, and a deeper understanding of the complex array of identities within the broader umbrella of “Hispanic.” (Also, Know Your Rights training is a requirement.)

When I asked Edelman about this legacy, he said all the right things. “You know, we recognize that we’re just standing on the shoulders of our forebears. And we’re very fortunate to go to continue in the struggle” The next thing he said was both poignant and necessary. “Where I find inspiration is in Crystal’s story and her parents’.”

Like many in the workforce, Walker didn’t come from a legacy of outliers. She describes growing up in rural North Carolina on a dirt road with two parents who raised a blended family of four children on four blue-collar jobs between them. Everyone got through college, only to hit reality. “As a Black girl who’s also poor, I was told since kindergarten that you’re going to have to work three times as hard as everyone else,” she said. “But the most striking thing was my mom told me I was going to have to be okay with earning only half the recognition.”

Not on her watch, she says. “That’s what this certification framework does. It pushes us all to excel, to be acknowledged for that work, and it creates equity for us to compete. And that’s what’s most important for me.”

Wishing you a certifiably wonderful weekend.

This month is the more generous evolution of the original Hispanic Heritage Week, which was born of legislation sponsored by Rep. Edward R. Roybal (D-Los Angeles) and signed into law by President Lyndon Johnson in 1968. It was expanded to a full 30 days by President Ronald Reagan in 1988.

It begins every year on September 15 to acknowledge five Latin American countries that declared their independence from Spain in 1821: Costa Rica, El Salvador, Guatemala, Honduras, and Nicaragua.

But Roybal deserves to be acknowledged this year, more than ever.

In 1949, after a failed first attempt, he became the first Latino elected to the Los Angeles City Council. He filled a seat that represented District 9, which included Boyle Heights, Bunker Hill, Civic Center, Chinatown, Little Tokyo, and the Central Avenue corridor, a wildly diverse population that earned him the reputation as the "recognized leader of East Side minority groups," by the Los Angeles Times in 1955.

At his first Council meeting, he was introduced as “our new Mexican councilman who also speaks Mexican.” It was a pivotal moment for him, he later said. I’m not Mexican,” he said. “I am a Mexican American. And I don’t speak a word of Mexican. I speak Spanish.”

Evidently, he knew a little something about helping people with very different lived experiences to find common ground: He held on to his seat until he went to Congress in 1962.

While in Congress, he earned a powerful spot on the Appropriations Committee, co-founded the House Select Committee on Aging, and established the Congressional Hispanic Caucus. There, he cared about and influenced issues related to health and citizenship wellness for people well beyond his district, advocating for a wide variety of programs designed to help ignored, vulnerable, and immigrant populations find their full expression in life. In addition to inclusive education and health programs, he was ahead of the curve on aging and mental health and fought for the first federal funding for Alzheimer’s disease research.

Roybal’s vision and service stand in stark contrast to this year’s Hispanic Heritage Month shenanigans, which began with Republican governors coordinating campaigns to ship asylum-seekers up North in a cruel gambit to stoke political division. Let his legacy be a reminder that finding common ground is not only possible, it's essential.

What’s in a word? The 63 million people whose heritage we are celebrating this month are a racially, ethnically, and culturally diverse population. And that’s what makes the ongoing conversation around how to speak about them so fraught.

While “Hispanic” and “Latino” remain the most used terms, Chicano author, language researcher—and true TikTok delight (seriously) Dr. Jose Medina told ABC News that the gender-neutral terms “Latinx” and “Latine,” while annoying or offensive to some, address an important part of identity. "As an openly queer, Latinx, Latine, Spanglish-speaking language researcher of the world, to me that intersectionality is really, really important," he says.

Speaking of Chicano, language is particularly important to the people who want to distance themselves from terms associated with colonialist harm. Alfredo Corona, whose rap name is Aztec Speech, does “not really like to use terms like Hispanic and Latino too much,” preferring Chicano, a term popularized in the 1960s and nods to both his indigenous and American heritages. Fatima Garza identifies as Chicana and Fronteriza, which describes someone who navigates the unique cultures of the U.S. Mexico border area. "We didn't cross the border, the border crossed us. So, there's this very unique experience," Garza told NBC News.

“If we don’t invest in the Hispanic population today, we will pay the consequences tomorrow.”