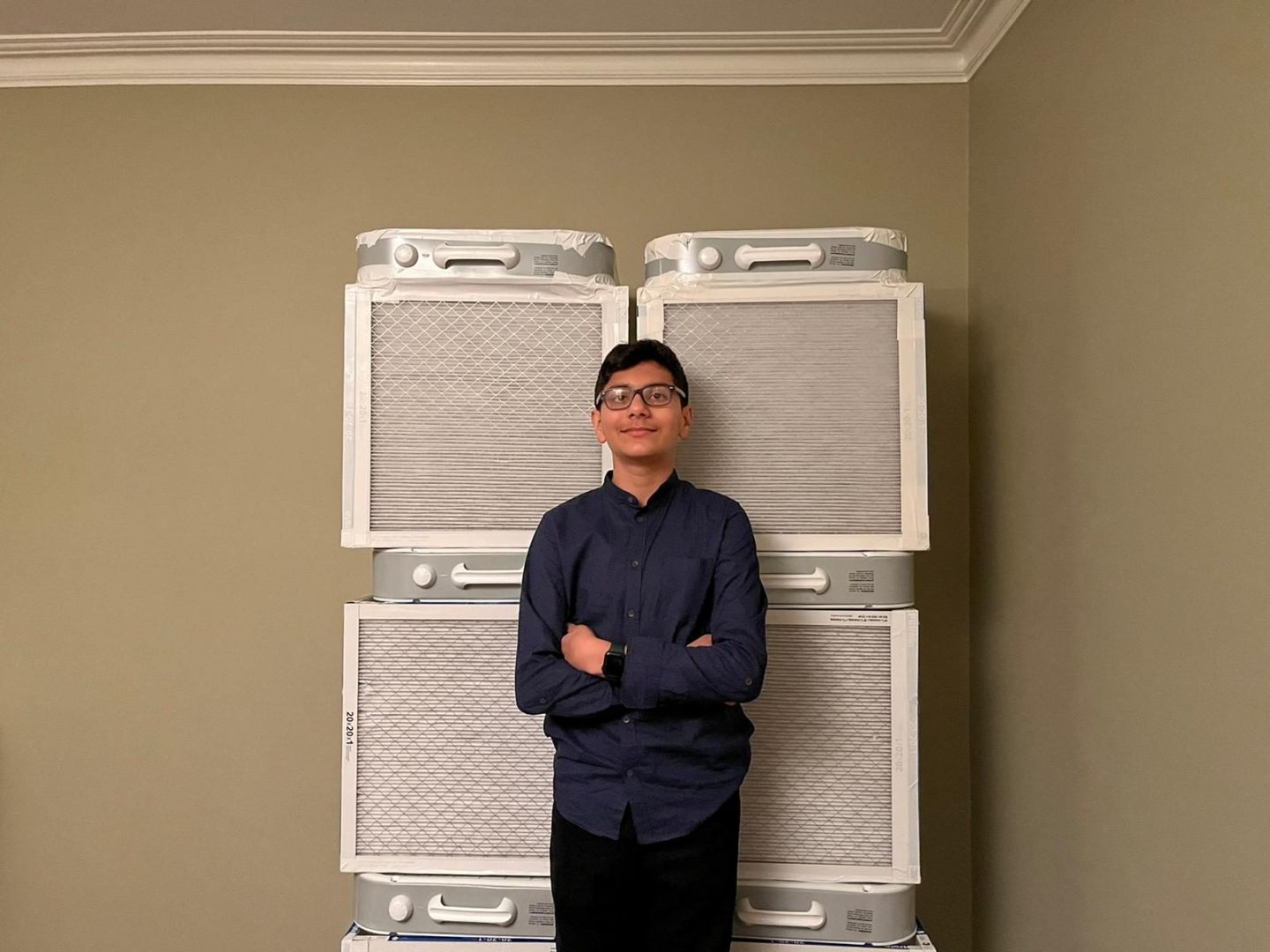 Shiven Taneja is a teenager who builds C-R boxes for the elderly and immunocompromised people.
Courtesy of Kavita Taneja

Late last year, Shiven Taneja was a person in search of a solution. His community of Mississauga, in Ontario, was entering its fifth COVID wave and Omicron was a fearsome, fast-spreading variant–yet rapid tests were in short supply and the availability of booster shots severely limited. He wanted a way to reduce risk.

Taneja found a potential answer in the same place many of us look: online. Reading about a do-it-yourself air filtration system designed to reduce aerosol particulates, he realized he could construct such a model for his own home at a fraction of the cost of a commercial HEPA purifier. Taneja quickly offered to build similar systems for others in his community at cost–and the requests came pouring in. A DIY solution to filtering the air had suddenly grown legs.

“My family’s living room became a warehouse for storing filters and fans,” Taneja told me. Since December, he says, he has delivered scores of home-built filtration systems, primarily to seniors and the immunocompromised who might not be able to do so for themselves.

All this would be impressive under any circumstance. It’s slightly more so when you consider that Taneja is 15 years old. And as we move into what may well be the endemic phase of Covid, his solution is one that many others around the world are also finding.

At the heart of this lies an ingeniously uncomplicated design, the Corsi-Rosenthal box, so named for two longtime friends who together created it. It was in the summer of 2020 that Richard Corsi, dean of the College of Engineering at the University of California-Davis, discussed the science behind his idea on Twitter. Jim Rosenthal, the CEO of a Texas-based air filtration company, saw Corsi’s tweet and thought, “That’s a great idea,” he told Fortune. “I literally made it (the first prototype) the next day.”

Essentially, a Corsi-Rosenthal is a window-sized box fan with high-grade (MERV-13) filters attached all around it. The components are four filters, the fan itself, some duct tape, and enough cardboard (say, the box that the fan came in) to form a base.

Though Corsi calls it “embarrassingly simple,” the Corsi-Rosenthal box delivers significant reduction in particulate spread in indoor settings. And at a rough cost of $60 to $100, it’s several times less expensive than similarly performing commercial HEPA grade purifiers–the kind of savings that may appeal to school districts and other enterprises for which the cost of effective filtration has, to now, been prohibitive.

It is also freely shared, a near-rarity that has led to its implementation in Europe, South America, and the Philippines, among others. “We decided to make it open source so anybody could use the design,” says Rosenthal. “The amazing part of it is, by doing that, we wound up getting so much more support and so many more people involved and trying to help.”

Among those who expressed interest were scientists and engineers who could use sophisticated methods to measure the velocity delivered by this handmade system. “We’ve had universities test it,” says Rosenthal. “UC Davis has a peer-reviewed paper (in which) they tested it and found that it did better than the HEPA air cleaners that they compared it to.”

The implications are promising. “We need this in all schools to protect our kids,” wrote Kimberly Prather, a widely regarded aerosol expert and atmospheric chemist at the Scripps Institution of Oceanography. Prather noted that the C-R boxes “also reduce flu asthma, allergies, and other respiratory health issues,” all under the basic concept of cleaner air moving through a defined space.

HEPA purifiers are highly efficient at removing airborne particles from the air–at least 99.97% efficient. In fact, recent experiments have shown that HEPA-filtered air cleaners can “continuously remove” SARS-CoV-2 from the air. But the fight against a virus like Covid also depends significantly on the amount of air that can be moved in any given time frame, experts say.

“A C-R box uses MERV-13 filters, which can only remove 60% to 80% of those particles, (but) the fan on the C-R box is much bigger and can clean more air,” says Joseph Fox, chair of the indoor air quality advisory group with the Ontario Society of Professional Engineers, who works with schools on HVAC issues. “All you care about in the end is the total rate at which the air is cleaned. So, what the C-R box lacks in efficiency, it makes up for in airflow.”

This is an affordable and potentially long-lasting option. School districts and other offices and companies can purchase MERV-13 filters in bulk at considerable savings, and California now lists C-R boxes as a low-cost portable air cleaning device for classrooms.

Corsi, who has purchased plenty of HEPA purifiers for use in his college on the UC Davis campus, told me that he could produce a C-R box for about $65–about a quarter the cost of a similar performing store-bought purifier. “These DIY units work amazingly well, and better than some commercial HEPA units,” says Megan Jehn, an infectious disease epidemiologist who leads the Arizona State University’s Clean Indoor Air Team. Jehn’s student volunteers have built approximately 350 C-R boxes for more than 100 schools across the state.

“I have one in the Dean’s office suite right now that has been running for seven months,” says Corsi. “It’s discolored–it’s not a nice white filter anymore–but it doesn’t have much of a particle cake on it. I’m sure we’ll be able to run this for another five months.” As for classroom use, he estimates that a single C-R box could potentially last through an entire academic year–and these could be put into action within a week in classrooms across North America, not years, immediately impacting public health.

This isn’t the whole ballgame. No amount of air filtration “will ever get you practically to the benefit of a well-fit N95 mask,” which remains the gold standard for preventing the spread of infection, Corsi says. You’ve also got to build the C-R box correctly in order for it to function properly–one reason why Shiven Taneja in Ontario offered his services to older folks who might have had trouble doing so.

Still, as COVID-19 has become more clearly recognized by researchers as an airborne disease, the notion of effectively filtering air looms larger in the big picture. That is not a new revelation: Cleaner air is healthier for all of us and is associated with lower absenteeism, improved cognitive function and work performance, heightened academic performance , and better health outcomes overall. But basic costs have defeated many a person, business, or school district from putting that knowledge to better use.

The federal Environmental Protection Agency has adopted a skeptical stance on DIY filtration systems, citing limited documented evidence of effectiveness and potential variance in performance. On the other hand, “3M tested the Corsi-Rosenthal Box with the same rigor it applies to its Filtrete brand of products and found the C-R Box “performs exceptionally well in its ability to capture unwanted airborne particles, including viruses, says Kelsey Hei, a 3M application engineer.

That is certainly the heart of the idea. “Do-it-yourself air cleaners like the Corsi-Rosenthal box have a role to play when commercial products are cost-prohibitive,” says William Bahnfleth, professor of architectural engineering at Penn State. In fact, Corsi estimates that the overall cost of constructing and maintaining a very good C-R box, averaged over three years, is about $4.46 per student per year in a 700-square-foot classroom with 25 students.

“That’s roughly the cost of one venti café mocha per student per year,” Corsi says. DIY cleaners, says Bahnfleth, are showing the public that improving indoor air quality in buildings “is not hard, and need not be expensive.” That, in and of itself, is a significant step forward for all of us.

But what if we leap? Prather, the aerosol expert, has suggested using the Defense Production Act to build 40 million C-R boxes, allowing us to place 200 to 300 boxes in every school in the country. The total estimated cost is $4 billion. That is a relatively minor investment for the major payoff of helping to keep students, teachers, staff, and families safe through a school year.

CORRECTION: Due to a source’s error, an earlier version of this story misstated the total estimated cost of building 40 million C-R boxes. The cost is $4 billion, not $400 million.