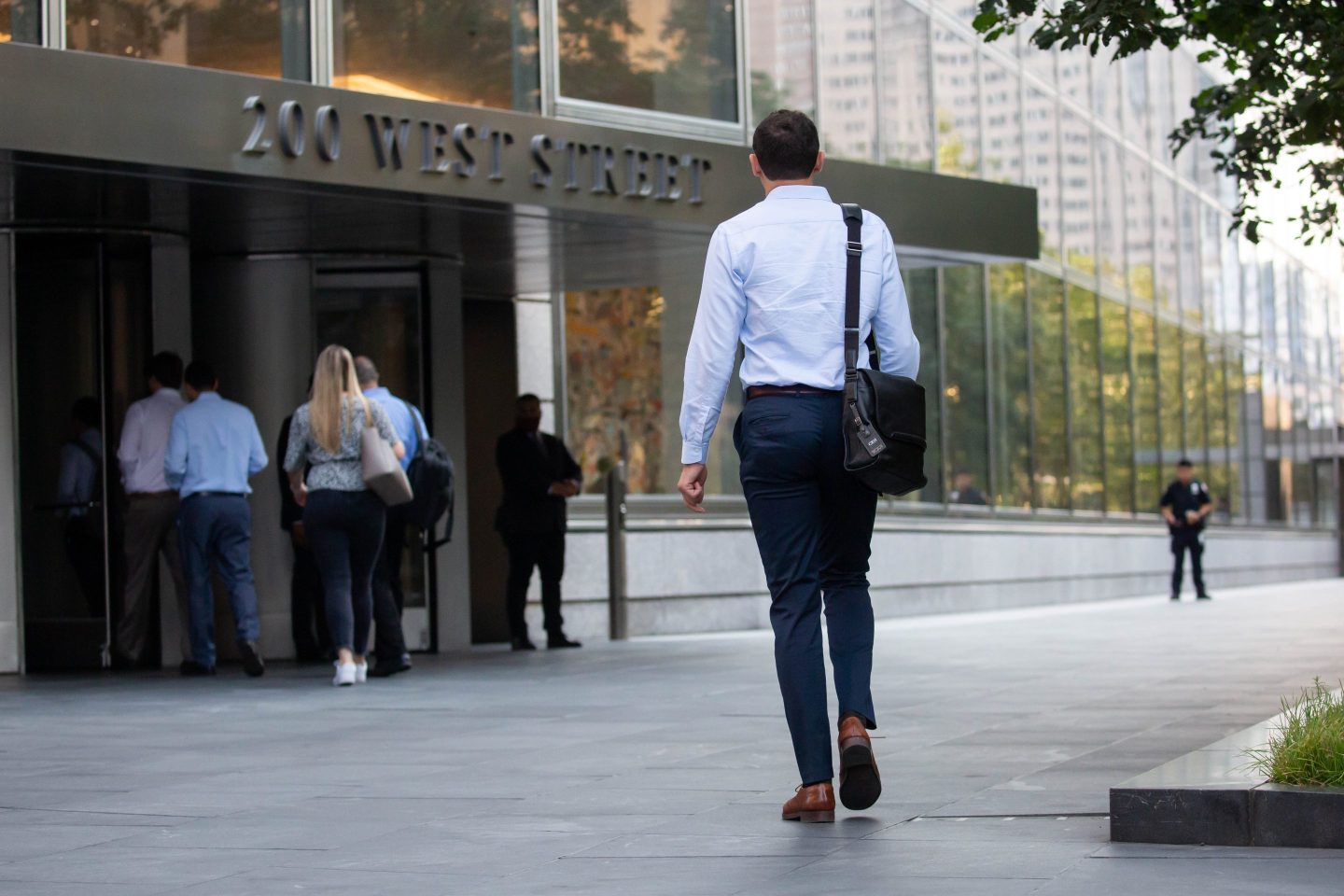 Goldman Sachs bankers are returning to the office as the five-day, in-office workweek restarts at the investment banking behemoth.
Michael Nagle—Bloomberg/Getty Images

As Labor Day weekend came to a close and bankers at Goldman Sachs shuffled back to the office on Tuesday morning for the mandatory return to a five-day in-office workweek, they found the free coffee cart, which usually sat in the lobby of the 200 West Street office, missing.

The days of the complimentary “grab and go” coffee station, brought in last year as an incentive to get people back into the office, are now over, the New York Post reports, as the banking giant strips away pandemic-era perks.

Sources at Goldman Sachs told the Post that management has a far stronger tool than coffee to get people back into the office anyhow: the threat of being fired.

“RIP to another pandemic perk for junior bankers,” one junior Goldman banker told the Post. “I’m sure the partners still don’t have to pay for their coffee—or anything in their fancy dining hall.”

Another blow to junior workers

Goldman Sachs is notorious for its aggressive push to get workers back into the office.

On Sept. 6, Goldman Sachs announced it would do away with all COVID-19 restrictions and said anyone was allowed to enter the office without a mask, regardless of vaccination or testing status.

Goldman CEO David Solomon previously called work from home an “aberration” and told Fortune, “I just don’t think the way we work in our business is that different than it was five years ago, and I don’t think it will be different five years from now.”

“The secret sauce to our organization is, we attract thousands of really extraordinary young people who come to Goldman Sachs to learn to work, to create a network of other extraordinary people, and work very hard to serve our clients,” Solomon said.

Goldman is hoping to go back to the way things were before the pandemic. Over the past two years, Goldman had also paused its annual year-end performance reviews, where the company would famously cut 5% of its bottom performing employees—but Goldman executives warned this practice would come back by the end of the year.

However, the aggressive push back to the way things were has been met with discontent, especially among junior bankers. According to the New York Post, six overworked first-year bankers quit together and walked out en masse in late August, with sources telling the paper that the atmosphere at the financial giant is at “an all-time toxic high right now.”

Doing away with perks

Beyond COVID measures and free coffee, Goldman is also ending free daily car rides to and from the office, which were introduced at the start of the COVID outbreak to help those who still wished to go into the office.

And it also isn’t the only company doing away with perks. Morgan Stanley has taken away free tickets to the U.S. Open tennis championship, which were once available to top performers at the bank.

Facebook’s parent company, Meta, told employees in March it was getting rid of free services like laundry and dry cleaning in the office and planned on pushing back the free dinner offering from 6 p.m. to 6:30 p.m.

But as companies aggressively push to get employees back into the office, the best perk a company could offer may just be an option for hybrid work.