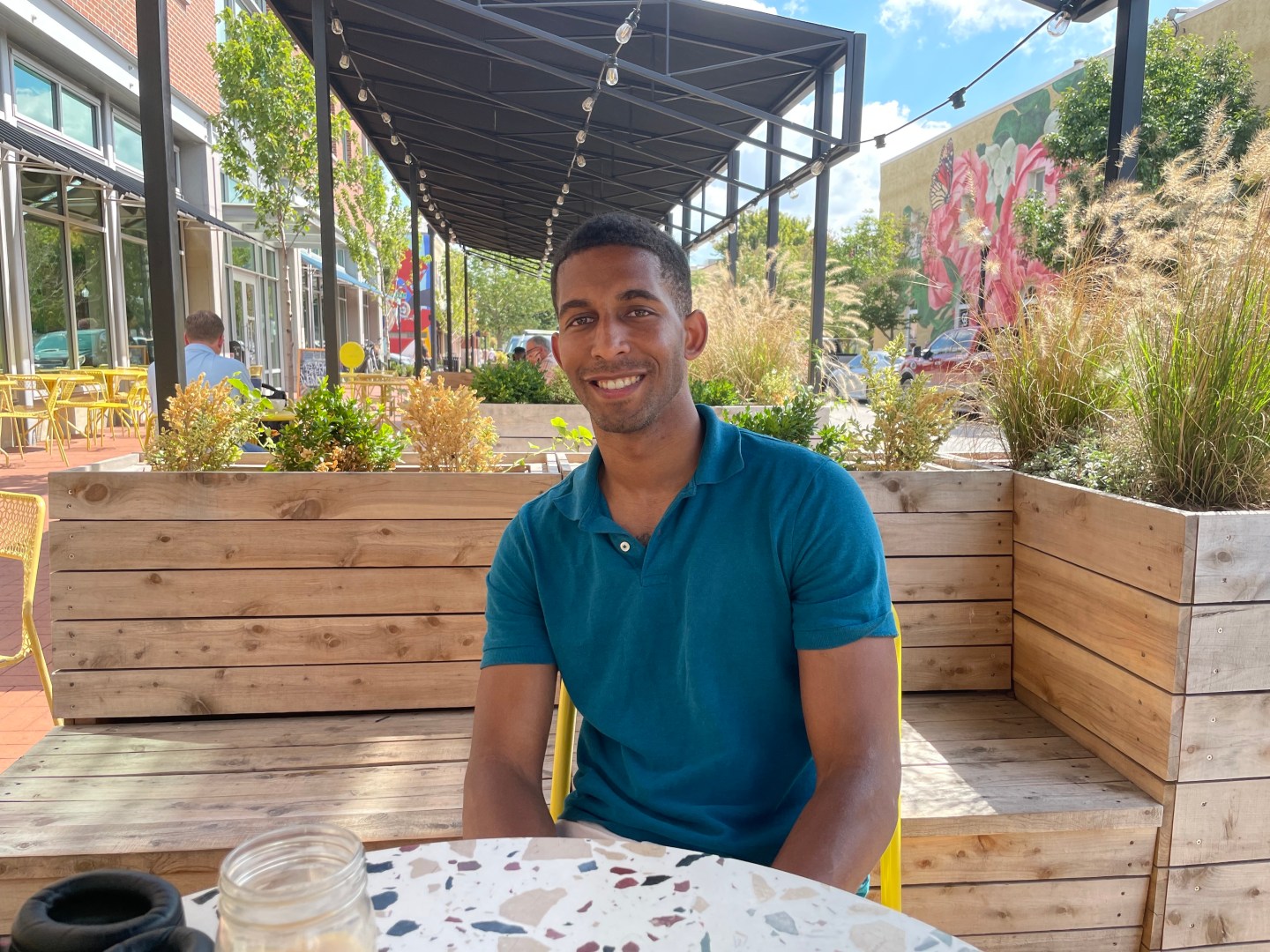 Chris Thompson built Sober Sidekick himself out of a garage as a personal project while he was in the early stages of sobriety.
Jessica Mathews—Fortune

Ego is the enemy.

That’s what startup founder Chris Thompson told me as we sat across from one another over a cup of coffee last week. I don’t often hear those words come out of the mouth of a founder. After all, in the startup industry, ego is often described as the very boost that sells the vision to investors.

But if Thompson was merely trying to sell something, he probably would have done things a little differently. Around this time last year, Thompson was sitting down with VCs, pitching an app he had developed, Sober Sidekick, which uses peer-to-peer support to help people get out of and move past their addictions. The app, which currently offers features including a sobriety tracker, in-app accountability messaging with other users, 24/7 AA meetings, and an option to chat with professional help, had just started taking off at the time. Sober Sidekick then had about 50,000 users, up from 13,000 last January and, although it is free to users, it was generating about $50,000 a month in revenue from leads it was passing along to substance abuse treatment centers.

Thompson says the approximately 15 VCs he spoke with wanted to see him lean into that lead generation revenue channel. Instead, he ended up walking away, saying that this growth strategy was at odds with his users’ best interests. He would later end up dropping those revenue streams altogether, and Thompson is now pursuing partnerships with an unnamed insurance provider and the United States Department of Veterans Affairs. He also says Sober Sidekick has been shortlisted for a grant with the American Heart Association.

For Thompson, Sober Sidekick—and the reason he is pursuing alternate revenue streams—is personal. He himself has suffered from alcohol and drug addiction, and he describes waking up on the sidewalk in the rain on Thanksgiving Day in 2018 in a parking lot, then getting rejected by two hospitals until getting the help that he needed.

“I had two DUIs. I’ve made all the mistakes you could possibly make while not being able to stop drinking. I just want my personal story to be one that tells people wherever they’re out there that it doesn’t have to be this way. All we have is today, and today can be day one of your comeback story,” Thompson says.

Thompson built the app himself out of a garage as a personal project while he was in the early stages of building a new life. He talks passionately about the brokenness of the addiction treatment industry, which he argues is only perpetuating the cycle.

“You have to take trust seriously when it comes to a platform like this,” Thompson tells me, adding later: “This is people’s lives. And if we go down any model that sacrifices trust, all that value goes away.”

Thompson and I spoke about growing Sober Sidekick to the 130,000 users it has today, the “body brokering” taking place at substance abuse treatment centers, and the moment when walking away from venture dollars and forfeiting your own paycheck becomes the best option. (Some portions of this Q&A have been edited or shortened for clarity and/or brevity.)

Term Sheet: How did you end up starting Sober Sidekick?

Thompson: Sober Sidekick is something that’s deeply personal to me, because I’m someone who—had I not gotten the right help from the right people—might not be here. I’ve had over 10 trips to the emergency room as a result of my own addiction. I really lost control from the ages 21 to 24. And, for me, there was a long time when I thought I was always going to be this way, and I thought I was going to be stuck in this pattern. I felt like I couldn’t escape it.

Thanksgiving Day, 2018, was the first day of my recovery journey….About 30 days into my journey, I started to think: Why did it take me this long to learn to open up and be real with my peers, to own where I’m at?…I decided: What if we built an algorithm that worked to get people to help people at scale? And what if we built it in a way where no member will ever post on our platform without receiving real-time support from one of their peers?

We launched a very basic [initial app] in January of 2019. At that point in time, I didn’t necessarily consider this a company. I considered this to be a passion project. But day one—with no marketing—I saw people in Texas supporting people in Massachusetts. It was just random. It was only like 10 users, but they were all supporting each other. They found it through the AppStore search. It showed me that people are searching for help, and they’re finding a very basic app that was built the day before as their best option for support. So that told us this is something worth building on.

When you say “we” and “us”—who are you referring to?

That’s the extreme, but even at a basic level, only 10% of people who go to a treatment center will remain sober a year later. And the primary source of revenue in the substance abuse treatment industry is repeat clients… It actually benefits them more for their patients to relapse 90 days later and come right back. They’re billing the patient $1,500 to $2,500, and it’s just a revolving door.

Are you a developer—did you build the whole first iteration of Sober Sidekick yourself?

Yeah, I’ve built the entire thing up to this point. [Laughs]

Why do you laugh?

Because I need help.

We’ve spoken previously about how you initially decided not to take venture capital money. Can you talk to me about that?

What’s most important is that we don’t dilute our mission…And within this industry, there’s so many cash grabs that don’t put our members first, and the entire substance abuse industry is a revolving door that’s focused on getting people into treatment, but not getting people who leave treatment to stay out of treatment.

There was a ton of pressure to focus primarily on lead generation for treatment centers, which is extremely lucrative. Both my partner and I have a ton of friends who can generate millions a month through lead gen for treatment centers. For us, that’s the wrong incentive. If our app, from the jump, is incentivized for our users to relapse—if we get paid when our users relapse, then we’re building a business model where we succeed when our members fail. And what has been important to us from the beginning is we want to build a model that succeeds when our members succeed.

For me, it’s personal. I’ve been in the situation where I broke down the bathroom door, doing CPR on my roommate, and it [was] too late. For me, this is real, and for me, sacrificing our mission would be sacrificing everything I believe in. We [built] a model where we can prove positive and sustainable outcomes for our members. And then we can go directly to health insurance providers, we can go to the government, we can go to those who benefit from our members remaining healthy and have a revenue model directly with them.

When we first told that to VCs, initially they said: I’d be more comfortable if you focus on lead gen….We’re an early-stage company, and the goal is to generate value and growth. But if we focus on monetizing over monetizing the value we have now, the value will diminish—the trust will diminish. You have to take trust seriously when it comes to a platform like this. This is people’s lives. People are sharing things that they haven’t shared with their partners within our platform. And if we go down any model that sacrifices trust, all that value goes away.

Were you doing lead generation when you first started pitching VCs?

We realized [that] all this effort was taking away from our mission and our growth, and when we see our user growth going like this [makes gesture up] month over month, and we’re spending all of our time on VCs who aren’t interested in our impact-driven model, we’re splitting ourselves. We’re sacrificing our ability to scale faster. Who would have thought that you could grow a platform with one developer native on iOS and Android? Who would have thought you could do that with less than $150,000 in capital? Who would have thought you could scale that to 130,000 members? We realized this is something bigger than us. Our members are turning into champions for this platform: Our organic growth is crazy. And, you know, that’s kind of what gave us the faith to bet on ourselves.

When you decided not to pursue venture capital money, how did you think about growth?

That’s when we realized we’re a healthcare engagement company. And the value proposition we need to double down on is measuring impact, measuring health outcomes, measuring social determinants of health in the real world. And that’s when we doubled down on our analytics. We built impact tracking features for our members. And then we also started to discover correlations that were always there that we just had never thought to look for. That’s when we realized—shit, people are 300% more likely to stay sober after they take these five actions. So Let’s optimize our plan. Let’s re-optimize our platform. So that more people take these five actions within 10 hours of downloading Sober Sidekick.

I studied economic development in college, and we hired my economic development professor to work with us and to mentor me when it comes to measuring community impact—finding community signals… And my biggest takeaway from him in college was impact is never trickled down. It’s from the bottom up, and it’s from empowering communities, and it’s from hearing their stories….We doubled down. We started interviewing users for hours every week, and taking notes from all of them. The path that we’re on—it may not be the easiest path, but it will be the most impactful path and what’s best for our users and best for us in the long run.

There were a few months where I could pay my co-founders and I could pay our employees, but I couldn’t pay myself. It’s all worth it. I did this for 18 months with nothing—and now with 130,000 members, when it was 10,000 members 18 months ago, we know that we’re making the right choice. If you hit a tree 1,000 times in the same spot, it will eventually fall.

A programming note… As you read this, I am making the two-hour trek over to Tulsa this morning, where I will be meeting with investors, founders, and LPs the next few days. I will be continuing to write this newsletter as usual, but look forward to giving you an inside look at the burgeoning startup scene in Oklahoma’s second largest city.

- Regal.io, a New York-based outbound phone and SMS sales solution, raised $38.5 million in Series A funding. Emergence Capital led the round and was joined by investors including Founder Collective, Homebrew, Flex Capital, Inspired Capital, Operator Collective, and other angels.

- Odyssey Energy Solutions, a Boulder, Colo.-based renewable energy platform for emerging markets, raised $5.34 million in funding. Equal Ventures led the round and was joined by investors including Twelve Below, Abstract Ventures, Founder Collective, and MCJ Collective.

- Northzone, a London, New York, and Stockholm-based venture capital fund, hired Anna Skarborg as head of sustainability. Formerly, she was with Canucci.

- Verdane, an Oslo-based growth equity investor, hired Helena Svancar as a partner. Formerly, she was with Ericsson.