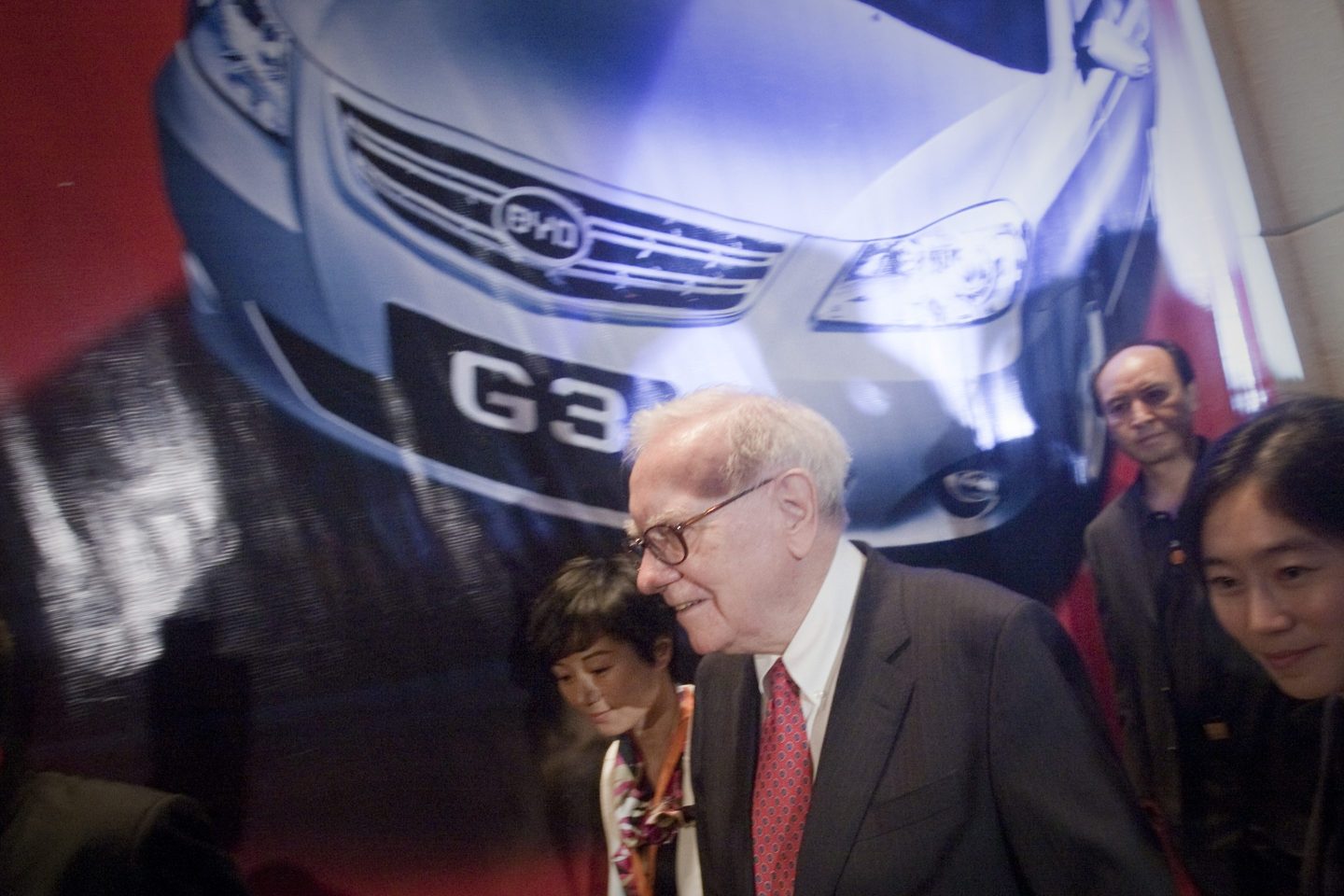 Buffett’s investment in BYD has led to massive returns for the billionaire. So why is he selling?
Nelson Ching—Bloomberg/Getty Images

Shareholders in BYD, China’s biggest electric-car maker, should be celebrating.

The company controls 29% of China’s “new electric vehicles” market, which includes both plug-in hybrids and battery-powered cars, far ahead of competitors like Wuling, based in China’s Guangxi province, and Elon Musk’s Tesla. It sold more cars in the first seven months of 2022 than in 2020 and 2021 combined. It’s the second-largest seller of electric vehicle batteries globally, with company executives hopeful that BYD batteries might soon power Tesla cars. The company’s half-year profit is triple what it reported a year ago.

Yet as of Friday market close, BYD stock is down 16.4% for the year and is nearing the lows it hit in March, when BYD shares (along with shares of other EV companies) fell after Russia’s invasion of Ukraine stoked fears of a nickel shortage. The metal is a critical component of batteries.

One man is driving the bearish sentiment: Warren Buffett and his decision to start trimming his sizable stake in the electric-car maker.

Buffett’s firm, Berkshire Hathaway, according to filings to Hong Kong’s stock exchange, has sold about 3.05 million shares in BYD since Aug. 30, dropping the conglomerate’s stake in the electric-car maker from 20.49% to 18.87%.

Berkshire’s selloff has encouraged other investors to ditch the stock. BYD’s Hong Kong–listed shares are down about 15.6% since Berkshire Hathaway first disclosed it was slimming down its stake in the electric-car maker. (BYD shares recovered slightly in Friday trading, ending up 2.5% for the day.)

Buffett’s sale hasn’t pushed analysts to reevaluate their views on BYD. They expect bumper demand for EVs in China for years to come, with government subsidies and other policies encouraging Chinese customers to go electric. “The Chinese auto market is attractive given its size. If investors want to tap the growth potential here, BYD is still a top choice,” Morningstar analyst Vincent Sun told Bloomberg on Aug. 31.

Buffett might still be bullish on BYD’s business and China’s electric car market, too. His firm’s step back from the carmaker fits with his longtime strategy of value investing, meaning his exit may be the result of BYD’s success, rather than any qualms he may have about its fundamentals.

Charlie Munger, Buffett’s longtime business partner, convinced the Omaha billionaire to buy a stake in the company after Munger took a liking to BYD’s founder and current CEO Wang Chuanfu. Munger called Wang “a combination of Thomas Edison and Jack Welch” in a 2009 Fortune interview. After investing in BYD, Buffett became an outspoken booster of the company and often made public appearances alongside Wang. In 2009, Buffett told Fortune that the carmaker’s progress was “extraordinary.”

In July, investors worried that Buffett had soured on the company. BYD shares equal to Berkshire’s stake appeared in Hong Kong’s clearing system, where shares must be registered before they can be traded. BYD shares fell 12% the following day.

Yet Buffett observers explain that the billionaire’s share sale is just a matter of the Berkshire chairman sticking to his famed investment philosophy.

Buffett has long been a proponent of “value investing,” or buying shares that are considered to be undervalued, and holding them until the market properly values them.

“Buffett generally holds his instruments for many years; he eventually exits most of them when he views them as fully valued, or their future prospects have become less attractive,” David Kass, professor of finance at the University of Maryland, told Fortune.

BYD’s Hong Kong shares have risen by over 2,700% since Berkshire bought its BYD stake back in 2008, climbing rapidly since early 2020. “The share price has recently reflected the improved performance and outlook for the company,” Kass says, and so Buffett may consider shares to be “fully valued.”

“The valuation of BYD, while a successful investment, has reached levels that Berkshire historically wouldn’t have had an interest in,” says Cole Smead, president of Smead Capital Management.

“Buffett once said that ‘investors should remember that excitement and expenses are their enemies.’ The only way to deal with excitement is to sell,” said Smead, referring to a line in Berkshire Hathaway’s 2004 shareholder letter.

Another factor in Buffett’s sale is Berkshire’s larger business. “It’s not just BYD,” Smead says. “It could also be what’s going on in [Berkshire’s] underlying insurance float that causes them to want to gravitate [to] capital quickly.”

In a note published after Berkshire disclosed its first sale of BYD shares, Arun George, an analyst who writes for SmartKarma, a platform for independent investment analysis, connected the BYD sale to an earlier instance in which Buffett trimmed his stake in a hot China investment.

At one point, Berkshire Hathaway owned 11% of PetroChina’s publicly floated shares, purchased for $488 million. Starting in July 2007, Berkshire slowly reduced its stake in the state-owned oil company, before exiting entirely by October. The entire stake was sold for $3.31 billion or nearly seven times the initial investment. In a Fox Business interview at the time, Buffett said he sold the stake “based on price.”

And Buffett may now be looking for his next big bet. “Perhaps Buffett has identified other investments that are currently more attractive,” says Kass.