Your boardroom meeting shouldn’t look like a scene from ‘Succession.’ Here’s how to avoid infighting and power struggles 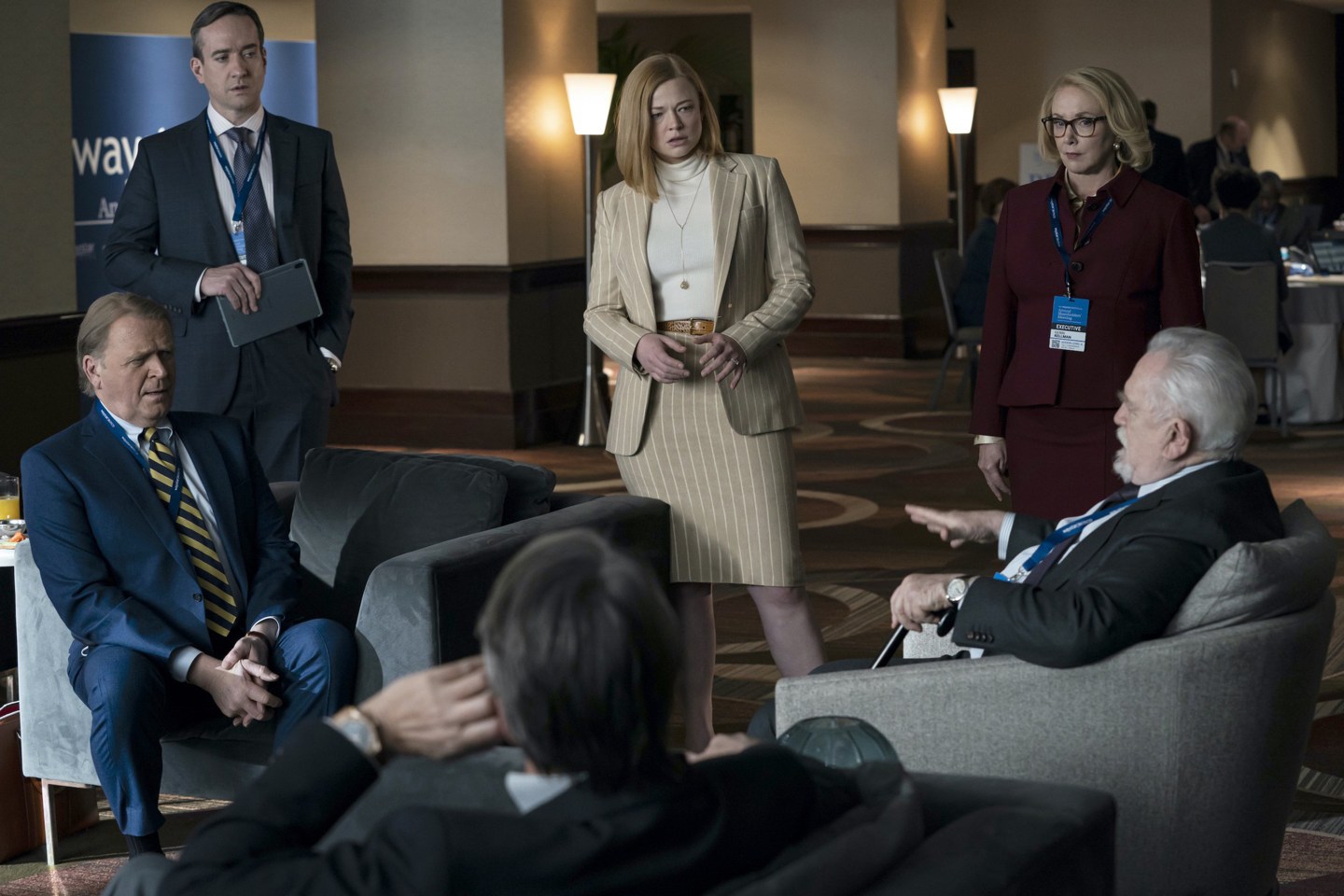 I recently received this intriguing question from a reader:

The query immediately brought to mind depictions of corporate boards in popular culture, particularly Succession, HBO’s dark comedy that looks poised to clean up at this year’s Emmy awards on Monday, Sept. 12. For those who aren’t avid TV viewers, the show is about a family-run conglomerate whose abusive patriarch and CEO, Logan Roy, is under pressure to step down, while his emotionally stunted adult children savagely compete with each other for his seat. Hollywood is rarely kind to boards, but Succession dials up the boardroom loyalty tests and sniping. Like Jan, I’ve wondered how often real-life board meetings reflect milder versions of the Roy family’s conflicts.

The answer? Sometimes, according to board experts, who say cattiness and aggression are certainly not a feature of all boards but are inevitable when powerful leaders are placed in heady roles and tasked with finding solutions to complex high-stakes issues. Minimizing unpleasant, time-wasting friction is of utmost importance, particularly as directors face new pressures to regularly refresh boards, bring in underrepresented voices, take on new environmental and social causes, and respond to demands from activist investors. Any one of these forces—not to mention the usual inflection points around CEO succession or financial and cybersecurity crises—could turn a boardroom into a pressure cooker.

Laurie Yoler, a general partner at venture capital company Playground Global, has sat on the board of more than 25 companies. In that time, she’s witnessed board members who scream at each other or have an adversarial relationship with a company’s management team. She’s also been privy to “board theater,” when directors are either too afraid of or enamored with a CEO to ask tough questions. The best boards avoid both extremes, she says, and instead, create a trusting environment in which productive disagreements are welcome. That outcome, though, really comes down to the board chair, says Yoler, a self-proclaimed “governance junkie.”

Similarly, Maggie FitzPatrick, an independent board director and veteran corporate communications executive, says there’s a wide range of board personalities. But Succession’s take on boards with family members is not far off. “They’re complicated,” she says. “Power makes people do some interesting things in my experience.” She also believes that some boardroom drama can be a positive sign of change in boardroom culture, especially as companies begin “reframing power and privilege” across domains.

Here are some tips from Yoler and FitzPatrick on how to create boardroom conditions that will inspire collaboration and trust, while minimizing interpersonal conflicts.

– Build a strong foundation. Bring together a diverse group that’s professionally trained, ethically minded, and operates with independence, says FitzPatrick, who is a proponent of certification and training courses. Board recruitment “should be like preparing for a marathon,” she says. “There are things that you have to do to condition yourself to be effective in the boardroom, and you have to have some requisite skills.” Without them, “you run the risk of having people in positions of power who are not well equipped to be there.” And from that flows dysfunction.

– Don’t wait until the annual review meeting. Board chairs must immediately correct board members “who have gone rogue.” Following an incident, the chair should contact badly behaved members to discuss their conduct, then hold a series of meetings outside of regular board gatherings to sort out misunderstandings between directors.

– Make sure the board’s role is clear. A certain amount of rigor around the board’s goals “should be brought to bear for each board meeting,” says FitzPatrick. Otherwise, strange dynamics and passive aggressive behavior “can creep into the boardroom.”

– Ask newcomers to call out ineffective processes. CEOs and chairs must make it clear that new ideas are welcome, says Yoler. “If the members of the board have been together for 20 years and then you bring in a newbie or multiple newbies, it’s probably going to be weird because the old guard may feel a lack of comfort with the new ideas coming in—or they may embrace it.” It’s up to the chair to manage that.

– Get back to in-person meetings. One of the perks of face-to-face interactions is the ability to read the room during frank discussions. Since it’s easy for outspoken members to dominate video calls, the chair should ask all directors for their thoughts at the end of each virtual meeting to make sure all voices are heard.

– Discuss the board’s culture explicitly. It takes boards time to figure out how to work together through crises and to understand its collaboration style, says Yoler. “The question is, have you built trusting relationships around the table between board members and between management so that you can handle any problem together? And, if so, how?”

Finally, when board members refuse to behave in a manner that’s conducive to respectful, focused discussions and healthy debates, ask that they step down. However, allow the resigning director to do so with dignity and thank them for their service, Yoler says.

While there’s a place for clever insults and explosive break-ups in TV scripts, the same can’t be said for corporate America.

"Silicon Valley companies putting engineers on diversity, racial justice, and other issues on their platform is when I know the company's actually focusing on doing something. Because they can hire a lot of lawyers to send memos around, but when they actually put engineers on something in Silicon Valley, it means they're working to solve the problem."

— Rashad Robinson, president of the racial justice and civil rights advocacy group Color of Change, joined the Rapid Response podcast to discuss his approach to engaging with large businesses like Airbnb and Meta.

👓 Read: Current stats about CEO turnover suggest that boards are cracking down on underperformers. But researchers at Stanford Graduate School of Business have also found that boards are still soft on CEOs who aren’t living up to expectations—and directors rarely have detailed succession plans in place.

🎧 Listen: Is the anti-ESG investing movement a legitimate threat to more progressive companies? On the GreenBiz podcast, Alison Taylor, executive director of Ethical Systems and adjunct professor at New York University’s Stern School of Business, explains why the irrational new push from right-wing politicians and others could be a "flash in the pan."

📖 Bookmark: Here's a cheat sheet that directors can share with company executives: "Presenting about data to your board: 6 tips from experts." The experts are big league execs who joined this year's MIT Chief Data Officer and Information Quality Symposium.

Jill Sommers, a former commissioner of the Commodity Futures Trading Commission, has been appointed director at FTX US Derivatives, a subsidiary of FTX, the crypto exchange led by Sam Bankman-Fried. Vicente Reynal, chairman, president, and CEO of Ingersoll Rand, is joining American Airlines' corporate board. Nintex has tapped Jeff Teper, president of Collaborative Apps and Platforms at Microsoft, as a new independent director. Building and facility management company ABM recruited Jim DeVries, CEO of security technology company ADT, to its board. Larry Quinlan, former CIO of Deloitte, has joined software maker Boomi as a director. In the U.K., Adriana Karaboutis, chief information and digital officer at the electricity company National Grid, is now a board member at the insurance firm Aon.

- Corporate directors are beginning to focus on other forms of diversity besides gender, according to research company Equilar; its quarterly report shows a slight drop in the share of women recruited to U.S. boardrooms.

- BlackRock is taking a stand against directors who sit on too many boards at once, as part of its campaign to improve corporate governance at the companies in which it invests.

- Target scrapped its policy requiring CEOs to retire at 65, a move that experts see as a reflection of changing attitudes towards aging and a stability measure in uncertain times.

The British monarchy, aka “the Firm,” has lost its longest-serving leader, a woman who gave the world a masterclass in managing an institution’s reputation. In this profile of Queen Elizabeth II for The New Yorker, Rebecca Mead decodes the monarch’s “ceaseless performance of power without actual potency” and her knack for winning the respect of critics. She writes, “Elizabeth led a life made up of privilege and sacrifice, and even those who resented the former acknowledged the latter.”

"Like all very old people, the Queen grew shorter as she aged: when she appeared on the balcony of Buckingham Palace during her Platinum Jubilee celebrations, in June 2022, she was shorter by a head than her heir, Charles, even in her hat and her court shoes. 'As you can see, I can’t move,' she informed visiting officials to Windsor Castle in February 2022, shuffling slightly on her feet, cane in hand, game as usual for the social interactions that her role demanded. The Queen small-talked on a vast scale.

But her persona became only more towering as her personage dwindled. By instinct, constitution, and training, the Queen knew that what was demanded of her was an almost superhuman splitting of self. She was the hereditary ornament of the nation—as impractical as the Crown Jewels, with which her coronation had been celebrated. At the same time, her modus operandi was founded on a principle not of display but of concealment. For her own self-preservation, and for the preservation of the institution that she embodied and led, it was often wise to withdraw behind a gilded curtain."

Read the full piece here and have a lovely weekend.