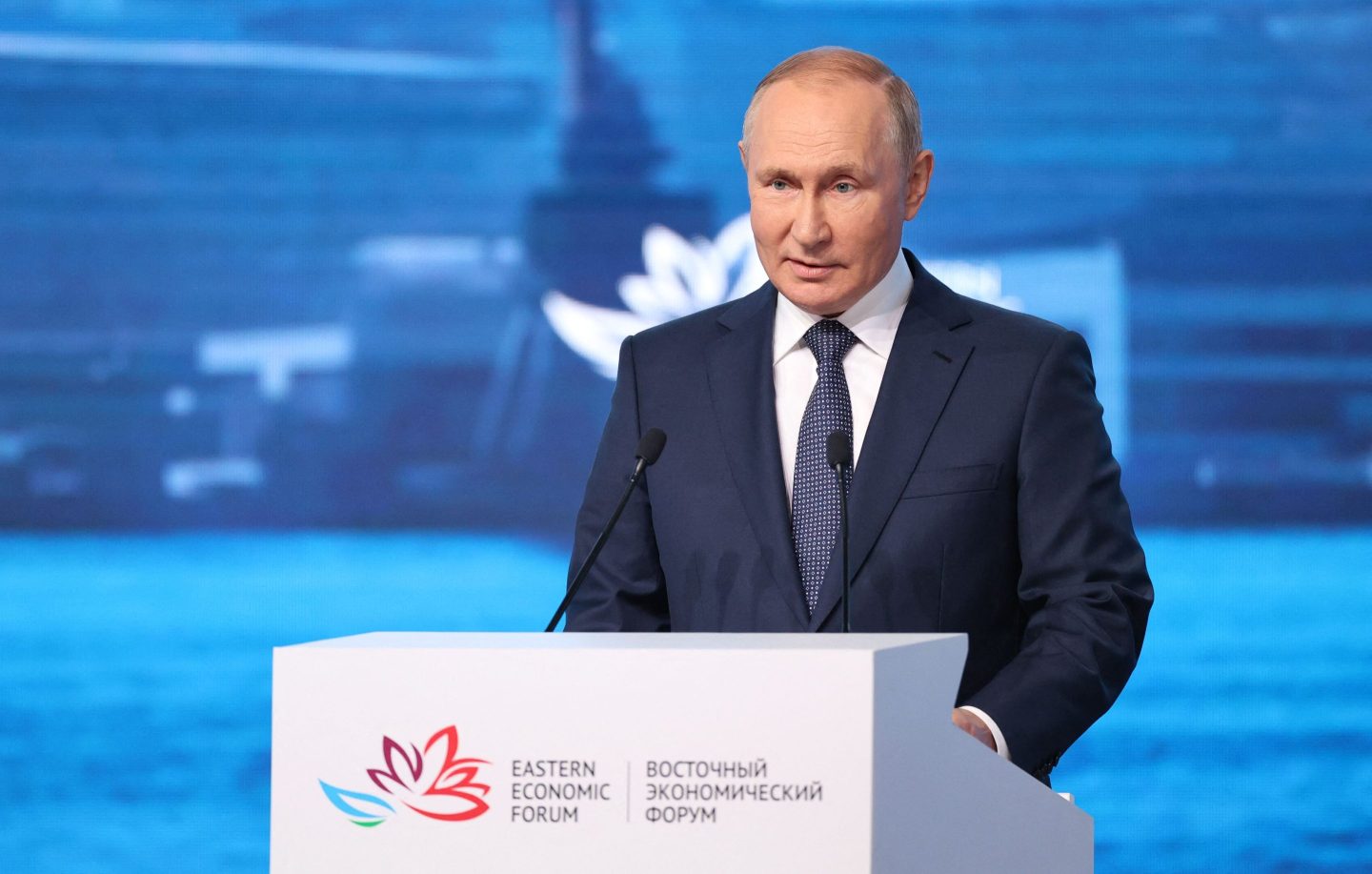 Almost seven months into his invasion of Ukraine, Russian President Vladimir Putin said on Wednesday that his country has not lost anything from the grinding war and the resulting confrontation with the West.

In a combative speech at the Eastern Economic Forum in the Russian Pacific city of Vladivostok, Putin instead claimed that Russia is gaining influence on the global stage and the war in Ukraine is setting a new international trajectory where the West will fall and Asia will rise to claim the future.

“We have not lost anything and will not lose anything,” Putin said, arguing that “the entire system of international relations has recently undergone irreversible…tectonic shifts,” according to a transcript posted on the Kremlin website.

“The Western countries are seeking to preserve yesterday’s world order that benefits them and force everyone to live according to the infamous ‘rules,’ which they concocted themselves.”

These days are over, Putin argued, saying that the Asia-Pacific countries are emerging as new centers of economic and technological growth, and they are attracting human resources, capital, and manufacturing.

Putin regards the “special military operation” in Ukraine as a turning point in Russian history where the country can finally shed the humiliation of the 1991 fall of the Soviet Union, and regain its dominance by rising with Asia—despite the Western sanctions placed on his country.

“In terms of what we have gained, I can say that the main gain has been the strengthening of our sovereignty, and this is the inevitable result of what is happening now,” Putin said. “This will ultimately strengthen our country from within.”

Putin’s claims come amid mixed signals for the future of the Russian economy.

While the Russian currency, the ruble, has recovered from a slump immediately following the invasion, and economic indicators suggest the country will suffer less than expected in the short term—buoyed by surging oil and gas income—other signs portend long-term difficulties.

Kremlin insiders are privately being warned that Russia may face a longer and deeper recession as the impact of U.S. and European sanctions spreads, Bloomberg reported Tuesday.

Two of the three scenarios in the internal Kremlin report show Russia’s contraction accelerating next year, with the economy returning to the prewar level only at the end of the decade or later.

Technology sanctions have also reportedly forced Moscow to turn to North Korea to purchase artillery, as supply-chain disruptions mean it cannot produce enough of its own.

In his speech, Putin took aim at the Western sanctions placed on Russia after its invasion of Ukraine, calling them “open and aggressive attempts to force the Western mode of behavior on other countries, to extinguish their sovereignty and to bend them to its will.” He argues it is a policy pursued by the “collective West” for decades.

“The waning dominance of the United States in the global economy and politics, as well as the stubborn unwillingness or even inability of the Western elites to see, let alone recognize objective facts, acted as a catalyst for these processes,” Putin says.

Putin also argued the sanctions were “short-sighted actions” triggering hyperinflation and destroying the global economy. “In an attempt to resist the course of history, Western countries are undermining the key pillars of the world economic system built over centuries,” Putin said, noting that as a result, confidence in the dollar, euro, and sterling is falling.

Putin also addressed the controversy surrounding the Nord Stream 1 pipeline, which has been shut off since last week as Russia claims that sanctions on the country make it unable to service the turbines.

“Give us turbines and we’ll turn on Nord Stream tomorrow,” Putin said, adding that “they won’t give us anything.”

Germany has previously said that a turbine had been sent for repair by Russia and is ready to be sent back to Russia, but Moscow has made paperwork issues an obstacle.

While German Chancellor Olaf Scholz has accused Russia of “blackmail” over energy supplies, Putin once again dismissed these claims, calling it “nonsense” to suggest Moscow was using energy as a weapon against Europe as retaliation for the sanctions.

Putin also dismissed claims that losing Europe as a customer for its oil and gas would hurt Russia. Putin boasted its majority state-owned energy company Gazprom had already agreed on key details, including pricing, for a third supply deal with China. Putin noted China would pay Gazprom for its gas in national currencies, based on a 50-50 split between the Russian rouble and Chinese yuan, unlike Western economies that have shunned Russia’s attempts to make them buy oil with rubles.

But even if Putin downplays Russia’s reliance on Europe as a customer, Moscow’s actions have damaged its long-term energy plans, according to a top energy chief. Moscow is doing itself “long-term harm by alienating the EU,” Fatih Birol, head of the International Energy Agency, said in an op-ed on Tuesday.

“Russia’s place in the international energy system is changing fundamentally, and not to its advantage,” he wrote.

Birol argues that Russia will not be able to expand its supply by drilling in oil fields that are in harder-to-reach places or by liquefying its natural gas to send abroad without the help of Western companies, technologies, and service providers.