‘It’s not scary to die for the motherland’: Russian students return to school with new Kremlin-designed classes to instill ‘patriotism’ and ‘love’ 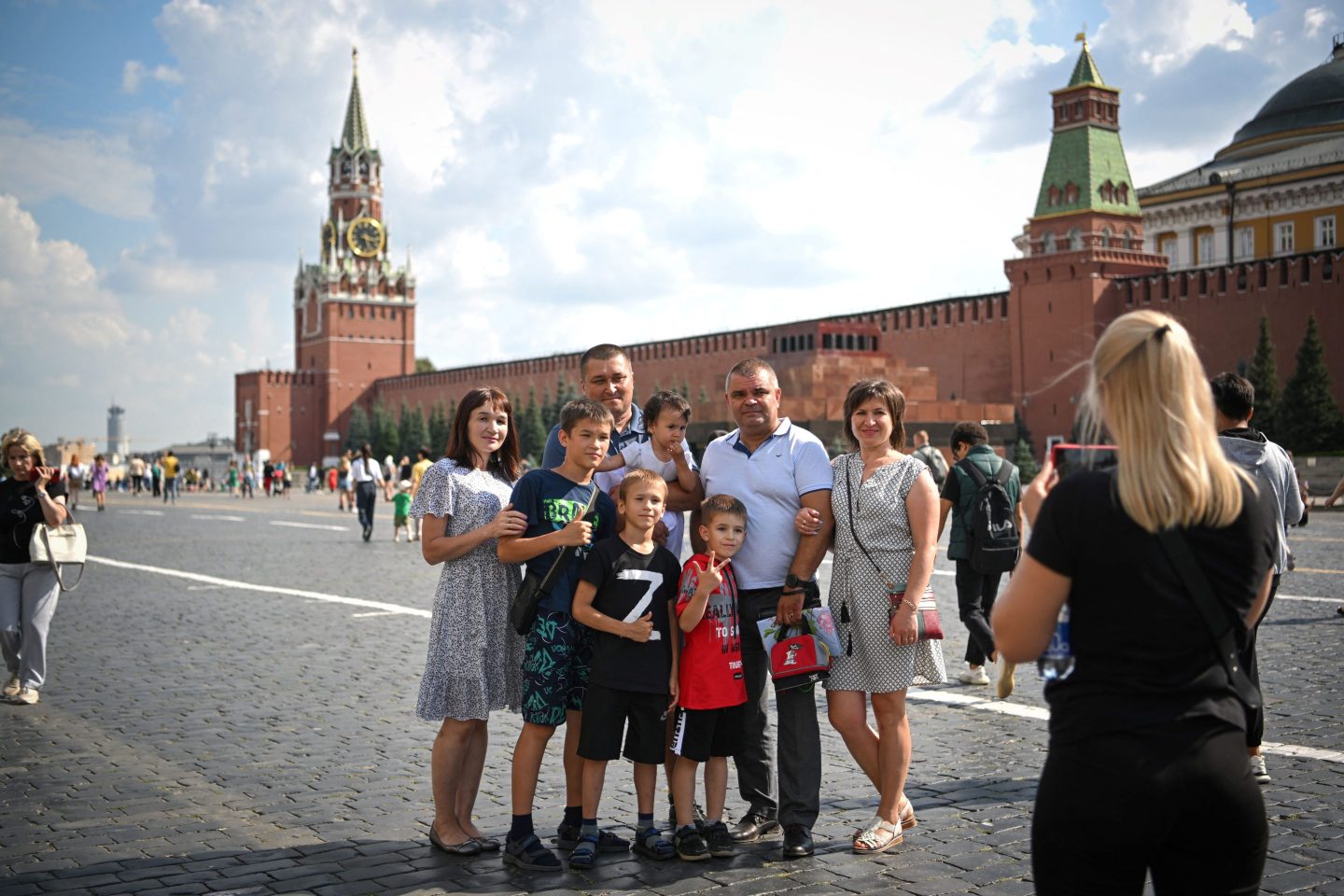 A group of people, including a boy wearing a T-shirt with the letter Z, which has become a symbol of support for Russian military action in Ukraine, poses for pictures on Red Square in downtown Moscow on July 25, 2022.
Natalia Kolesnikova—AFP/Getty Images

Russian students returned to school this week to a new mandatory course that explains “key aspects of life in modern Russia,” including how to love the motherland and the purpose of Russia’s so-called special military operation in Ukraine.

Russia’s Ministry of Education has now mandated that schools nationwide teach this lesson weekly, called “Important Conversations,” to all students from first through 11th grades.

Over the weekend, Russian president Vladimir Putin met with a group of schoolchildren to explain the importance of the new curriculum, particularly to clear up the notion that “aggression is coming from the Russian side.”

The new Kremlin-designed class, which cost $361,000 to develop, is the latest iteration in a government push to change the narrative of Russia as the aggressor, as criticism of its war on Ukraine—both outside and inside of the country—grows.

Loving, serving and dying for the motherland

Russian schoolchildren will sit through lectures and videos, and participate in individual and group exercises to learn about Russia’s “traditional values” and the “true meaning of patriotism.”

Children in grades one and two will learn how to “manifest love” for Russia, by listening to patriotic songs—including those from the Soviet era—and photos of Russian nature. From grades three to four, students will learn “how to cultivate effective love for the motherland” through learning about Russian literary works, and more. The goal is to “enable younger students to feel a sense of pride in our motherland,” according to the teachers’ training manual.

From grades five to seven, the teachings will encourage students “to think about their personal responsibility for the country… [and] involvement in its fate,” the manual says. In one exercise, students are asked to write on the leaves of birch trees what they love about Russia, what they respect about Russia, and how they will be useful to their country. Students will learn about the Russian military’s “heroes” and “patriots.”

Teachers will test students on “correct” proverbs and ideas for demonstrating their love for Russia, which include sayings like “to love the motherland is to serve the motherland,” “happiness of [Russia] is more precious than life,” and “it’s not scary to die for your motherland,” according to Russian publication Important Stories.

“The aim of a person’s life is not to live happily. Buying a car… an apartment. That’s not a real purpose. You can only live when you understand what you are prepared to die for,” Kremlin TV presenter Vladimir Solovyov recently said in a speech to an audience of Russian children. “We’re the greatest country… because we have the greatest destiny. We’re fighting on the side of good,” Solovyov said.

From grades eight to nine, classes will discuss the “need to protect and preserve the unity of [Russia] and protect its peoples and cultures,” and students will record their learnings in a diary. Grades 10 and 11 will focus on the Russian government’s definition of patriotism, with the goal of understanding the importance of cultural unity “of the Russian people and the importance of its preservation” and cultivating a “civic identity and pride” in Russia.

Teachers should define patriotism as an act of “mastering dominant cultural norms” and “elevating the individual beyond love for oneself. Neglecting one’s own people means… a selfish disregard of others,” the teachers’ manual said.

In the last six months, the Kremlin has ramped up its efforts to indoctrinate young Russians to support the war and government. Some surveys suggest that Russia’s youth are more opposed to the war than other demographic groups, partly because of the uncertain future that the war has brought.

“They feel more acutely… that the war has deprived them of a future,” Kseniya Kirillova, an analyst for think tank Center for European Policy Analysis (CEPA), told Fortune last month. Many young Russians—estimates range from a few hundred thousand to a couple of million including journalists, academics, activists, and tech professionals, have fled the country since February.

Last week, Putin also hosted a state-led youth group meeting, as part of its bid to create a countrywide pro-government, pro-war youth movement, according to a Reuters report. In recent months, the government has also promoted content that shows young Russians wearing the letter ‘Z’—a symbol of support for Russia’s war in Ukraine.

“The Kremlin is escalating its long campaign to give Russian kids a ‘patriotic education’ designed to secure their loyalty and shape their future ideological outlook,” think tank the Atlantic Council wrote earlier this year.

The government has also clamped down on independent media publications, many of which are run by young Russians. In April, Russian courts sentenced four former editors of DOXA, an online student-run magazine, to two years of correctional labor for protesting the jail sentence of Kremlin opposition leader Alexei Navalny. On Monday, Russian courts gave 32-year-old Ivan Safronov, a former journalist, a 22-year prison sentence for “treason” and disclosing “state secrets” to foreign agents.