‘We realized that there’s no way we can return’: Russia’s best and brightest are leaving the country in record numbers. 6 young Russians explain why they left 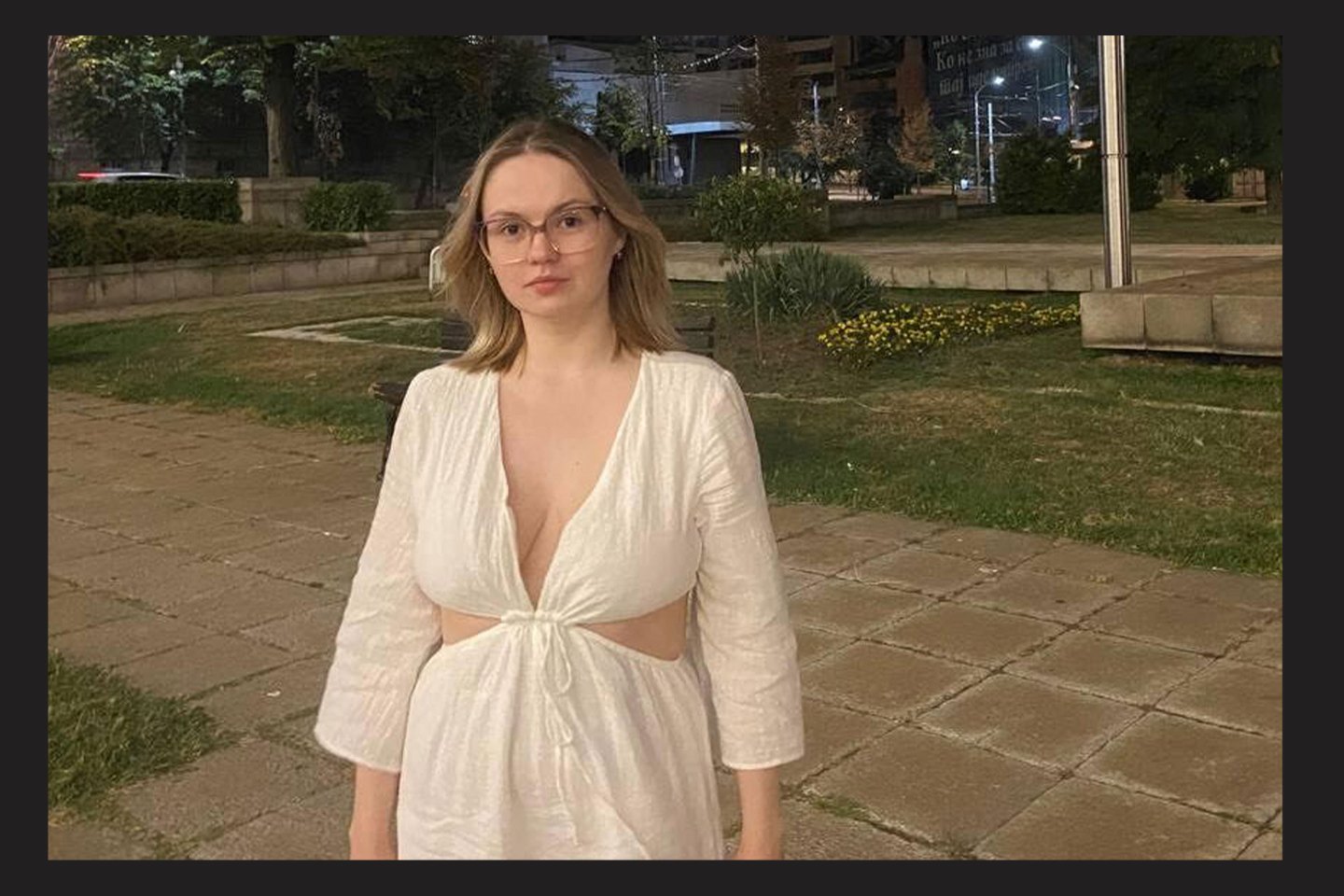 Photo of 25-year-old Sonya, who fled Moscow, Russia, for Belgrade, Serbia, in May.
Photo courtesy of Sonya

Three months ago, Sonya, a 25-year-old who works at a major mobile gaming company and moonlights as a tutor, made one of the toughest decisions of her life: She left Russia.

She had an old but cozy communal apartment with her boyfriend and two other roommates in Moscow’s city center, a tight-knit group of friends, and spent several days a week taking classes at a local dance academy—her lifelong passion.

“It’s my home. My family, friends are there. My whole life. How can you possibly abandon all these things?” she told Fortune.

But like countless other young educated Russians, Sonya, who asked that only her first name be used, packed her bags and fled the country after Russia invaded Ukraine on Feb. 24.

Over 3.8 million Russians left from January to March this year, according to the Federal Security Services’ own estimates. Some left for work or travel reasons, but many also left because of Russia’s war on Ukraine. Other estimates put the number of people who left because of the war at 300,000 to 3.8 million. The exact number is still unknown. A recent survey from non-governmental organization OK Russians says that the average age of Russians who left the country after Feb. 24 is 32 years old, while 80% of them have a higher education degree.

And as the war approaches its six month anniversary, the country is experiencing a second wave of outward migration, as individuals and families who needed more time to wrap up their lives are now leaving. And although the estimates vary widely, this year’s mass exodus from the country is comparable to the initial emigration out of Russia when the Soviet Union collapsed and 1.2 million Russians left in 1992 and 1993. Russia’s current, large-scale brain drain of young, skilled and educated citizens, could decimate sectors from journalism, to academia, and technology, experts say.

Sonya was part of the second exodus. In March, she bought tickets for the cheapest flight out, which was $650—only slightly less than her monthly salary of $750—and left in May. She said she realized early on that life in Russia was untenable, because of “the war… more horrid details about the situation in Ukraine were being revealed. The government, the system. Inhumane [and] anti-democratic laws. A ruined economy.”

“Everyday we were, and still are, going through an uncontrollable stream of shame and anger,” she says.

For a better future

Almost overnight, Putin’s war on Ukraine turned Russia into a global pariah and plunged the economy into chaos.

International leaders condemned Putin’s actions, and Western nations hit the country with unprecedented sanctions, including cutting it off from SWIFT, the international payments system.

Since February, over 1,000 global companies have curbed their operations in Russia, curtailing job opportunities and access to goods and services for Russians. Inflation soared to nearly 18%, while real wages plunged 7.2% in April.

In the first quarter of this year, the number of Russians living below the poverty line surged to 20.9 million—14.3% of the population, compared to 12.4 million in the last quarter of 2021, an increase of nearly 67%, according to Russia’s government statistics agency, which attributes the rise in poverty to inflation. Former Putin aide Andrei Illarionov told the BBC in April that this number could double or triple as the war continues.

As a result, young people in Russia envision an uncertain and unstable life ahead due to the war. They’re more opposed to Russia’s invasion of Ukraine than other demographics groups because they don’t want war, nor to be isolated from the rest of the world, according to surveys and experts.

“They feel more acutely than other groups that the war has deprived them of a future,” Kseniya Kirillova, an analyst for think tank Center for European Policy Analysis (CEPA), told Fortune.

Last June, 23-year-old Roman Pastukhov left his hometown of Blagoveshchensk, a small Russian city where China is a 5-minute pontoon ride away. He knew he had to leave Russia to obtain a widely-recognized post-graduate degree, and had received a scholarship to study environmental science and technology in Japan.

Russia’s social, political, and economic problems, which have piled up over the years, made living in Russia an unattractive prospect, Pastukhov told Fortune. “A mid-range job won’t get you anywhere,” he said, citing low salaries, high inflation, and an unstable ruble.

Pastukhov and his wife Anastasiia, had planned to return to Russia to see family and figure out the next chapter of their lives. But Putin’s war reinforced that living there would only bring financial instability and repression. After Feb. 24, Pastukhov lost access to his investment accounts, due to western sanctions on Russian banks.

He says at first, he was mostly upset and terrified for his friends in Ukraine. Now, he’s shocked at how well state propaganda is influencing Russians.

“We realized that there’s no way we can return to Russia anytime soon. Once we get in, we might not be able to get out. Staying outside seems to be the safest option for now,” Pastukhov says.

‘The creative class that I know has already left Russia’

Despite his activism, the government recognized his talent and awarded him with the title of “Talent of Russia” in 2019. But he says life under Putin’s regime had by then become unlivable because free creative and political expression was impossible.

By December 2021, the “atmosphere became so tense” that he left Moscow for Bali with his partner and professional team, Holon told Fortune. He believes if he had tried to do it after the war started, he would not be able to.

“I’m more than sure I would’ve been detained and imprisoned,” he says. After the war began, he halted a digital NFT project in partnership with Russian state bank Sberbank mid-launch, as he didn’t want to support the country’s war effort, even indirectly.

Now, the “vast majority of the creative class that I know has already left Russia. [Our community] in Bali alone is several hundred people,” Holon says.

Academics, activists and tech workers are also leaving in droves. Around 10% of Russia’s tech workforce has left—or is planning to leave—the country, the Russian Association for Electronic Communications told Russia’s Parliament in May.

Elena, a 31-year-old freelancer who creates content on YouTube, shared her story with Fortune in March, when she fled Moscow for Istanbul. Her elderly parents ask when she will return, but she says she has no plans to do so because the “news and ideas coming from the Russian government terrifies me,” she told Fortune.

She’s now learned basic Turkish and opened an account with a European digital bank. She says her friends have settled in Brazil and South Korea.

“Educated people who understand the real situation are leaving the country; selling their houses, making different documents, and learning foreign languages,” she says.

In January 2021, 36-year-old Andrey Gusev, the product head for blockchain and gaming firm Sabai Ecoverse, left Zelenograd, a small city outside of Moscow, for Phuket for better career opportunities. He has no plans to return.

“Seventy percent of my friends, who were in intellectual spheres…like IT, science and engineering, have left or are actively looking for ways to leave Russia,” he told Fortune.

Another tech worker, Alexander Salomatov, founder of metaverse and crypto consulting firm Soulmate Consulting, left Moscow for Bali in January of this year. He wanted to develop tech projects with a global team and user base, which seemed difficult to do in Russia. But it was the war that reinforced his belief that “now is not the best time” to live in Russia and traditional allies like Belarus and Kazakhstan.

“I can’t image what [good] is going to happen in Russia… if all of the most talented, energetic, and enterprising people have left their homeland,” Holon says.

The country has now lost its “most valuable human resources,” Michael Reynolds, director of Russian, East European, and Eurasian studies at Princeton University, told Fortune. “Young, educated, talented, and entrepreneurial Russians who, with their education and skills, would have become leaders in the Russian economy and helped drive its growth,” he says.

Some Russians will continue to contribute to their home economy through remote work, and can act as a sanctions buffer by setting up import-export operations in countries like Turkey, Armenia, and India. But the “bulk of this talent will be lost,” Reynolds says.

The Russian economy isn’t simply going to collapse because of the exodus, experts say. The supply of talented and skilled workers remaining in Russia—approximately only 30% of Russians hold a passport that lets them travel abroad—is “sufficient to keep the economy afloat,” Margarita Zavadskaya, a social science senior research fellow at the University of Helsinki’s Finnish Centre for Russian and East European Studies, told Fortune.

“But those who would replace [emigres] are likely to be less [skilled] on average and will… be more politically compliant,” she says. Some young Russians who stayed behind, like poet and teacher Katya V., who told her story to Fortune in March, says that she and her friends who remained in Russia did so to support their families and to protest from within. “I don’t want to give up everything here for [the government] to enjoy [ruling] without any resistance,” she says.

Still, the bottom line is that the Russian economy is losing competent and competitive [workers],” Zavadskaya says.

Putin has sought to portray the brain drain from the country as a positive, saying Russians who left the country and those who hold pro-western views as “traitors” who seek to destroy Russia.

“The problem is that… their [slave] mentality is there, not here, with our people. I am convinced that a natural and necessary self-detoxification of society like this will strengthen our country,” Putin said earlier this year.

But the government is showing signs that it might not let go of expats so easily.

Russian human rights organization Perviy Otdel (First Department) reported in May that FSB agents have started asking the relatives of those who have fled the country to ask them to return.

And Russia’s prospects for rebuilding and reaccumulating its lost human capital will ultimately be difficult in the short-term and with Putin still in power.

“Russia’s economic revival is only possible if the devastating war [ends], and the existing political regime collapses,” Zavadskaya says.

Russia would need to promise economic and political stability to attract Russians to return, Reynolds says. But as he notes, “there is no prospect of stability now.”