Residents in Jackson, Mississippi are seeing an increase in water pressure after a flood exacerbated the city’s already-damaged water system 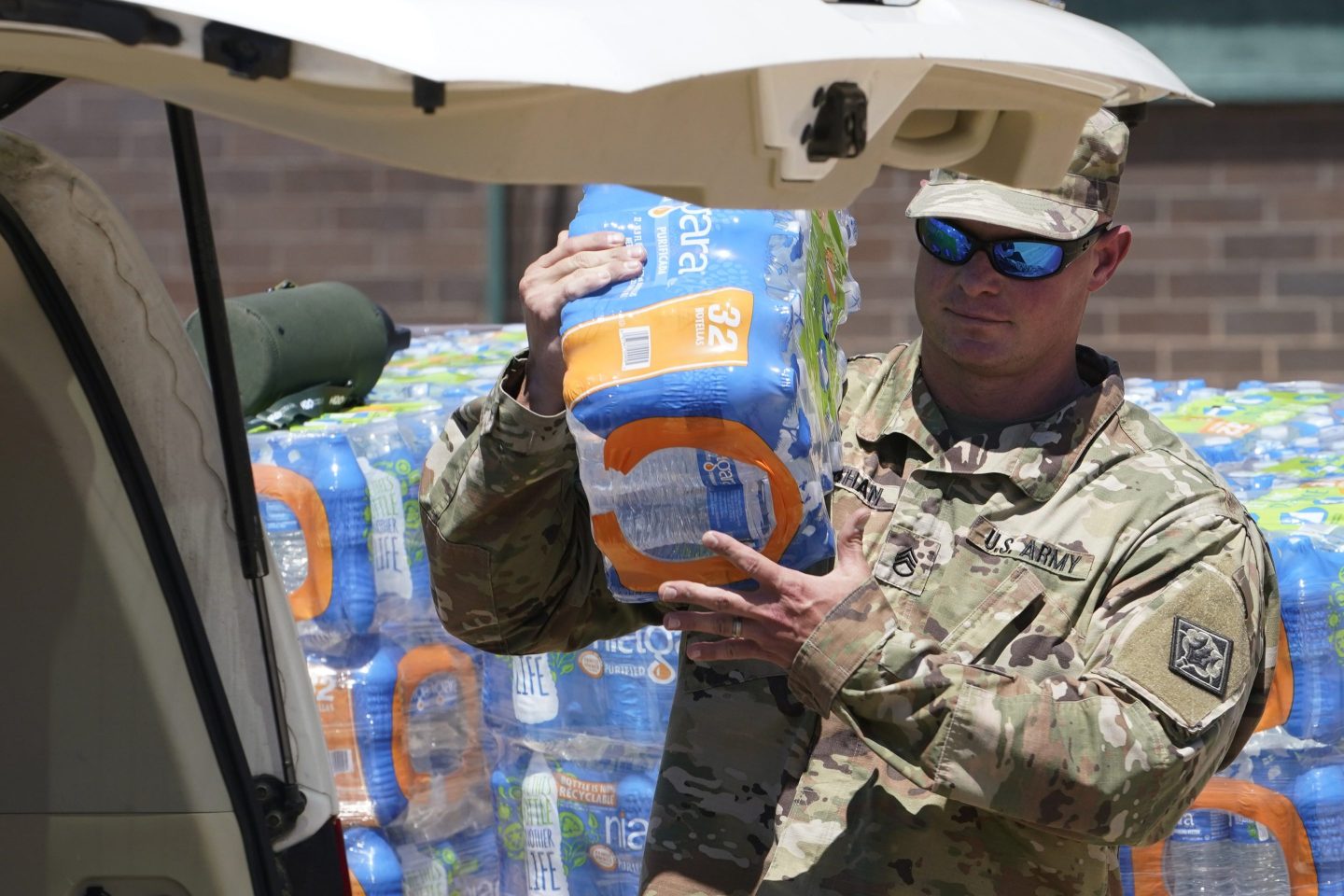 Mississippi officials set up emergency distribution centers for handouts of water and hand sanitizer Thursday in the capital city of Jackson, as efforts to restore a flood-impaired, long-troubled water system continued.

Jackson’s residents were already under a boil-water order before flooding from the Pearl River exacerbated long-standing problems at one of the city’s two water treatment plants.

Officials said they made progress overnight in refilling tanks, treating water and increasing pressure at the O.B. Curtis Water Plant, the facility at the root of the latest water woes in Jackson. Residents closer to the facility had pressure approaching normal levels, the city said in a news release, but added that many in the city still had little or no water pressure.

“To everyone in the city: I know that you are dealing with a profoundly unfair situation,” Reeves said in remarks aimed at city residents. “It’s frustrating, it’s wrong and it needs to be fixed.”

This is an aerial view of of the City of Jackson’s O.B. Curtis Water Plant in Ridgeland, Miss. on Sept. 1, 2022.
Steve Helber—AP Photo

Reeves and Mississippi Emergency Management Agency director Stephen McCraney stressed that the state would look for long-term solutions to the city’s water problems.

The water crisis affects the city’s 150,000 residents—many of whom were unable to take showers or flush toilets—plus an estimated 30,000 who come into the city to work at businesses without water pressure, Reeves said.

Reeves said those businesses are suffering major economic harm because of the crisis. McCraney said the state will look into the availability of federal Small Business Administration loans to aid them.

Figures on how many residents or businesses were directly affected by a loss of water at any given time were not available Thursday.

Lisa Jones filled empty paint buckets with water at a distribution site in south Jackson on Wednesday. She said her family would use the water for bathing. She said she’s frustrated by paying for water service she’s not receiving.

James Henry, a student athlete at Millsaps College shows the size of one of the stalls in the rented portable showers at the midtown Jackson, Miss., school on Sept. 1, 2022. The school rented two sets for the 200 students that remained on campus during the city’s latest water crisis.
Rogelio V. Solis—AP Photo

“Every week you have to beg somebody to go to their house and ask if you and your children can take a bath. And then you’re running their bills up,” Jones said. “If we can’t fix it, we need to get someone who can. … Fix what’s broke. Enough is enough.”

Reeves declared a state of emergency Monday night after excessive rainfall and flooding from the Pearl River exacerbated problems at the treatment plant. On Tuesday, President Joe Biden approved an emergency declaration for the state. Biden called Jackson Mayor Chokwe Lumumba on Wednesday to discuss response efforts, including support from the Federal Emergency Management Agency, the Environmental Protection Agency and the Army Corps of Engineers.

Thursday morning, the city reported “significant progress” in restoration efforts at the treatment plant, with output measuring 78 pounds per square inch, approaching a goal of 87 PSI.

“There are still challenges to navigate as the intake water source changes chemistry again. Operator schedules have been adjusted to increase coordination between shifts,” the city statement said.

In addition to on-site repairs, the city is working to obtain more chemicals needed for treatment.

—Michael Goldberg is a corps member for the Associated Press/Report for America Statehouse News Initiative. Report for America is a nonprofit national service program that places journalists in local newsrooms to report on undercovered issues. Follow him on Twitter at twitter.com/mikergoldberg.