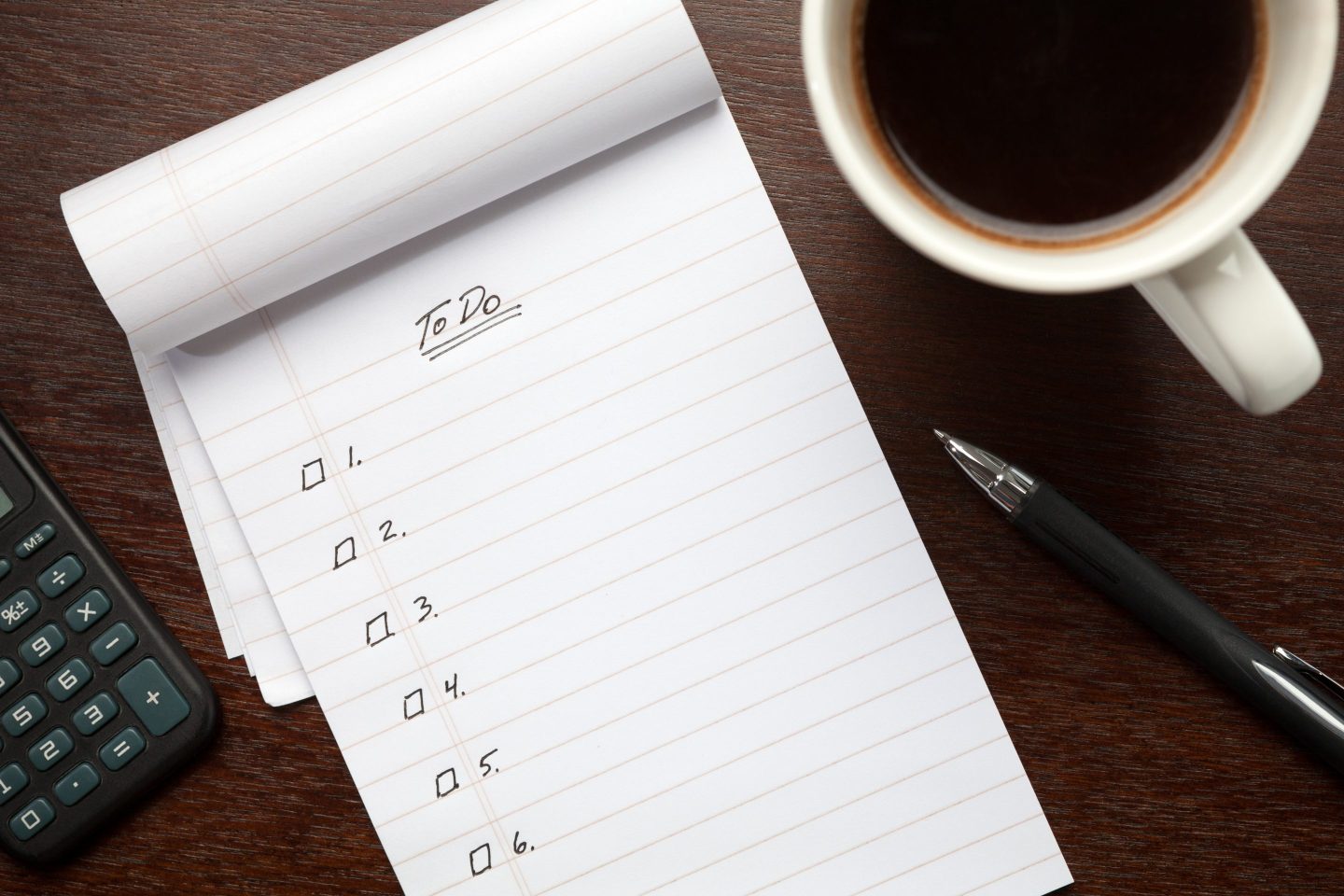 The Ivy Lee method consists of listing the most important six tasks in order of importance.
Getty Images

One of the most popular productivity hacks for ranking an executive to-do list originated from a man with a direct connection to Adolf Hitler. The connection comes from Ivy Lee, who created a method of prioritizing tasks so that you focus only on the six most important issues in front of you, every day, regardless of anything else.

The “Ivy Lee method” has been widely popularized in the business press. James Clear, who wrote the massive bestseller “Atomic Habits” (Amazon’s No.1 book for all of 2021, with more than 7 million copies sold), says “it’s simple, but it works.” Fast Company, Entrepreneur, The Wall Street Journal, and even my old employer, Insider, have all lauded the method.

The corporate blogs of companies such as Buffer, The Ladders, and the calendar app Tweek have also recommended Ivy Lee. A vast number of people on LinkedIn swear by him. The method is a “100-year-old productivity hack” that will “change your life,” Good Housekeeping once said.

There’s just one problem. Ivy Lee was a paid adviser to the Nazis.

This is the dark history of the Ivy Lee method, and how we forgot its creator supported Hitler.

Ivy Ledbetter Lee’s father was a Georgia Methodist preacher and his mother was a self-educated intellectual who gave birth to Ivy when she was just 13 years old, only 12 years after the end of the U.S. Civil War.

Their son became a handsome New York Times reporter who kept his hair neatly combed, favored three-piece suits, and maintained a Georgia drawl and the courtly manners of the Old South. Lee went on to pioneer the emerging field of corporate public relations in the early 20th Century. He rose to fame–and wealth–as an adviser to the Rockefellers and their Standard Oil empire. He coined the phrase “tell the truth because sooner or later the public will find out anyway.”

The legend behind Lee’s method goes like this: In 1918, Charles M. Schwab was the president of the Bethlehem Steel Company and already one of the richest men in the world. His public relations adviser at the time was Lee. Despite his success, Schwab was casting about for ways to make his Pennsylvania steel mills more efficient. Lee proposed a gamble: He agreed to work on the problem for three months, with no fee, as long as Schwab agreed to pay whatever he thought the results were worth at the end.

Lee demanded only that he be allowed to spend fifteen minutes with each of Schwab’s top managers. Schwab agreed. Lee gave them all the same advice: “Write down the six most important tasks that you have to do tomorrow and number them in order of importance. Now put this paper in your pocket and the first thing tomorrow morning look at item one and start working on it. Then do item two, and so on. Do this until quitting time. Don’t be concerned if you only finish one or two. You’ll be working on the most important ones, always. If you can’t finish them all by this method you couldn’t have by any other method either.”

This is the Ivy Lee method.

At the end of the three months, productivity at Bethlehem Steel increased so much that Schwab happily paid Lee $25,000–about $457,000 in today’s money.

When I discovered the Ivy Lee method, I wanted to include it in “Say Thank You for Everything,” my new book of advice for managers. So I researched the history of Lee.

In the late 1920s, Lee became an advisor to I.G. Farben, a conglomerate of German chemical companies known as “the German Dye Trust.” Also that decade, he met Mussolini when the future fascist dictator was just a senator in Italy, to ask him “what thoughts he would like to get across to the United States public,” according to the archive of Lee’s personal papers now stored at Princeton.

In 1933, Adolf Hitler became chancellor, abolished democracy in Germany, and made himself an absolute dictator. I.G. Farben became a direct conduit of Nazi economic policy.

The U.S. Congress regarded the rise of the Nazis as a crisis and imposed a boycott on German goods entering America. Needing advice on the threat to its business, I.G. Farben raised Lee’s retainer to $4,000 a year and gave him an additional fee of $25,000. Lee’s Berlin-based son was granted a $33,000 salary, according to The New York Times archive. In today’s money, that would be worth about $1,378,827.

In January 1934, Lee was introduced to Hitler by I.G. Farben officials. They “were anxious for me to meet him just as a personal matter, just to size him up,” Lee later said. Lee also met propaganda chief Joseph Goebbels and Joachim von Ribbentrop, Hitler’s minister of foreign affairs, according to historian Scott Cutlip’s account of the early days of PR, “The Unseen Power.”

The persecution of Jews had begun. There were arbitrary arrests and attacks on synagogues. In May 1934, the House Un-American Activities Committee conducted an investigation into Americans who supported Germany, and Lee was interrogated. Under oath, Lee admitted he was advising Berlin. “I have told them that they could never in the world get the American people reconciled to their treatment of the Jews; that it was just foreign to the American mentality, and could never be justified in the American public opinion, and there was no use trying,” he said.

When the testimony was unsealed, the lead story on The New York Times front page was “Ivy Lee, as Adviser to Nazis, Paid $25,000 by Dye Trust”. The New York Mirror went with: “ROCKEFELLER AIDE NAZI MASTER MIND”.

By that time, Lee had been diagnosed with leukemia. He passed away in November 1934. Those close to him believe the pressure of the hearings contributed to his death.

After the war, I.G. Farben’s top executives were prosecuted at Nuremberg. Part of their defense was “that this activity of the late Ivy Lee in the U.S.A. is unobjectionable and did not in the least have the tendency and the scope the prosecution wants us to believe,” Cutlip wrote. Thirteen of Lee’s German clients were sentenced to prison.

Amazingly, it is not clear that Ivy Lee actually believed he was helping the Nazis. From his point of view, Lee felt that if he could convince I.G. Farben–and Hitler– that their actions were abhorrent to the rest of the world, they might reform themselves.

Lee’s son explained his father’s logic to Cutlip in 1991: “They thought of hiring the world’s leading international advisor [Lee,] and Hitler would pay heed to what he said. Naive, yes, but the truth. … if his advice had been followed, the world might have wound up a different kind of place.”

Cutlip wasn’t willing to let Lee off the hook: “To give such advice to a German giant already enmeshed in the Nazi war machine carries naivete to the point of absurdity.”

Time passed. In the 1960s, a series of self-help writers discovered the story of Bethlehem Steel and Lee’s six-point to-do list, re-branded it “the Ivy Lee method,” and apparently forgot about the war crimes. The method is rediscovered every few years by personal success gurus.

To state the obvious: No one who recommends the Ivy Lee method is in any way endorsing the Nazis. The method is merely common sense. It has absolutely nothing to do with Hitler, per se. Very, very few people remember the full history of Ivy Lee.

Nonetheless, the news that this massively popular method of ranking your to-do list has a direct link to Hitler may leave you queasy, if, like me, you are a believer in to-do lists.

So here is some good news: There is a different but equally effective ranking method you can use instead of Lee’s. In this system, you rank your tasks based on whether they are “important” or “urgent,” favoring importance over urgency, thus:

2. Important but not urgent.

4. Unimportant and not urgent.

This is called the “Eisenhower Matrix.” It is named after President Dwight D. Eisenhower, who planned the invasion of Normandy in 1944, which won World War II.

Jim Edwards is the author of Say Thank You for Everything: The secrets of being a great manager — strategies and tactics that get results.