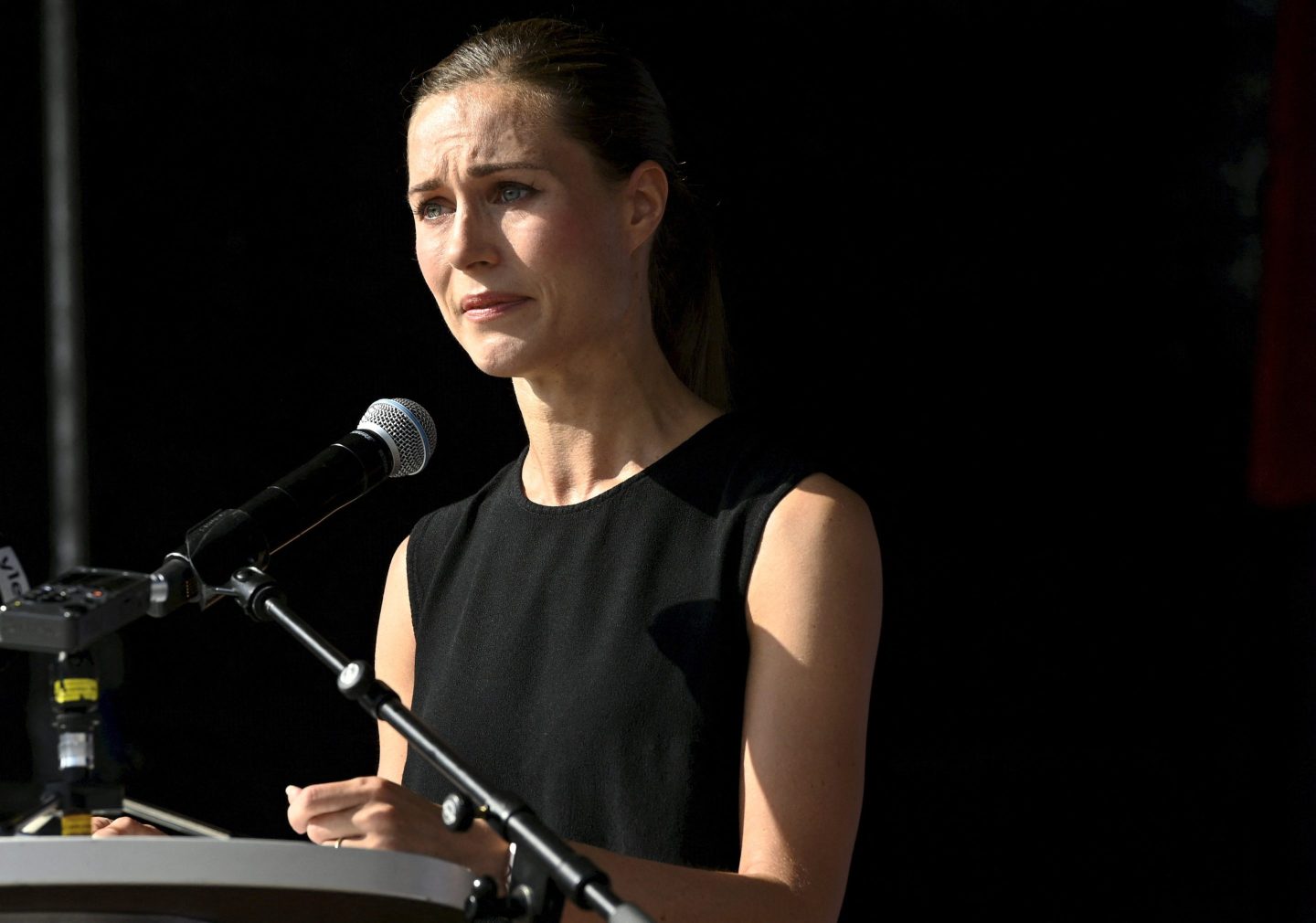 The 36-year-old prime minister was scolded by her peers last week, and has pledged to now focus more on work.
Heikki Saukkomaa—Lehtikuva/AFP/Getty Images

Videos and photos of Finnish Prime Minister Sanna Marin partying and attending rock festivals over the summer may have won her fans abroad, but at home the leaks are causing her trouble.

There’s a sense among Finns that global media headlines are detracting from more important topics: the rising cost of living, surging power prices and the billions of euros on the line in the rescue of Uniper SE, a subsidiary of state majority-held utility Fortum Oyj.

The 36-year-old prime minister was scolded by her peers last week, and has pledged to now focus more on work. She is set to be questioned by the press about the budget on Wednesday, when the government is due to decide on how it plans to help households with their bills.

National grid company Fingrid Oyj has warned that Finns must prepare for power cuts this winter as there will be no supplies from Russia to help meet peak demand.

Facing a general election in April 2023, Marin’s Social Democrats are lagging behind the opposition National Coalition in polls. If that trend continues, she is unlikely to continue as prime minister after the ballot, though her party could still join a coalition. Finnish cabinets are formed through post-election negotiations.

Around 42% of Finns said the revelations have hurt their view of the premier, a recent survey commissioned by newspaper Helsingin Sanomat found. About 46% of adults surveyed said their opinion hasn’t changed while 9% said their image of her had improved.

Marin was heralded as a breath of fresh air when she became the country’s youngest ever premier in 2019 at the head of a coalition of five parties, all led by women. She introduced equal parental leave as one of her first acts in office and was lauded for her calm and measured approach to the coronavirus pandemic. Marin also won acclaim at home as she worked with President Sauli Niinisto to garner international support for the historic bids of Finland and Sweden to join NATO in the face of Russian aggression in Ukraine.

But seeing their premier field questions about partying and alcohol hasn’t sat well with all voters. Marin’s popularity is starting to suffer.

It was in July that Marin was photographed enjoying the Ruisrock festival. She then turned up at another festival, making headlines with her glittery outfit. In mid-August, a leaked video showing her dancing with friends was released by local newspaper Iltalehti. Footage then circulated showing Marin in a night club with a man who wasn’t her husband, and she took a voluntary drug screening that came back negative for illegal substances.

The videos stirred a fierce reaction on social media, including in the U.S. More Americans searched for “Sanna Marin” on Google on Aug. 19 than for singers such as Britney Spears or Taylor Swift. Hillary Clinton waded into the conversation this week, tweeting “Keep dancing.” The hashtag #SolidarityWithSanna trended. Marin was the subject of late-night talk shows, like The Daily Show with Trevor Noah.

Already in December, reports surfaced that Marin had enjoyed a night on the town knowing she had been exposed to the coronavirus, even though she broke no official rules on isolation. She also took flak for leaving her government-issued phone at home that night, prompting questions over how easily she could be contacted in a crisis.

In a separate instance, Marin invited revelers to an ad-hoc after-party at the premier’s official residence, raising concerns over security. And later Marin apologized for a photo taken at the prime minister’s official residence showing two of her female guests kissing while pulling up their shirts in front of the government’s official blue backdrop.

“Even I sometimes need—in these dark times—joy, light, and fun,” Marin told reporters on Aug. 24. “I have not missed a single day of work, or any job undone, and will not do so.”

While some say the negative coverage reflects a double standard, in which female leaders are held to higher standards than their male counterparts, others argue it simply reflects the Nordic country’s low threshold for political scandal, for both men and women.

In 2018, Green Party politician Touko Aalto made headlines after shirtless images of him spanking another man at a club in Stockholm began to circulate. Former premier Alexander Stubb was once chastised for wearing shorts to a press conference while European Commissioner Jutta Urpilainen faced criticism early in her career for sporting fishnet tights.