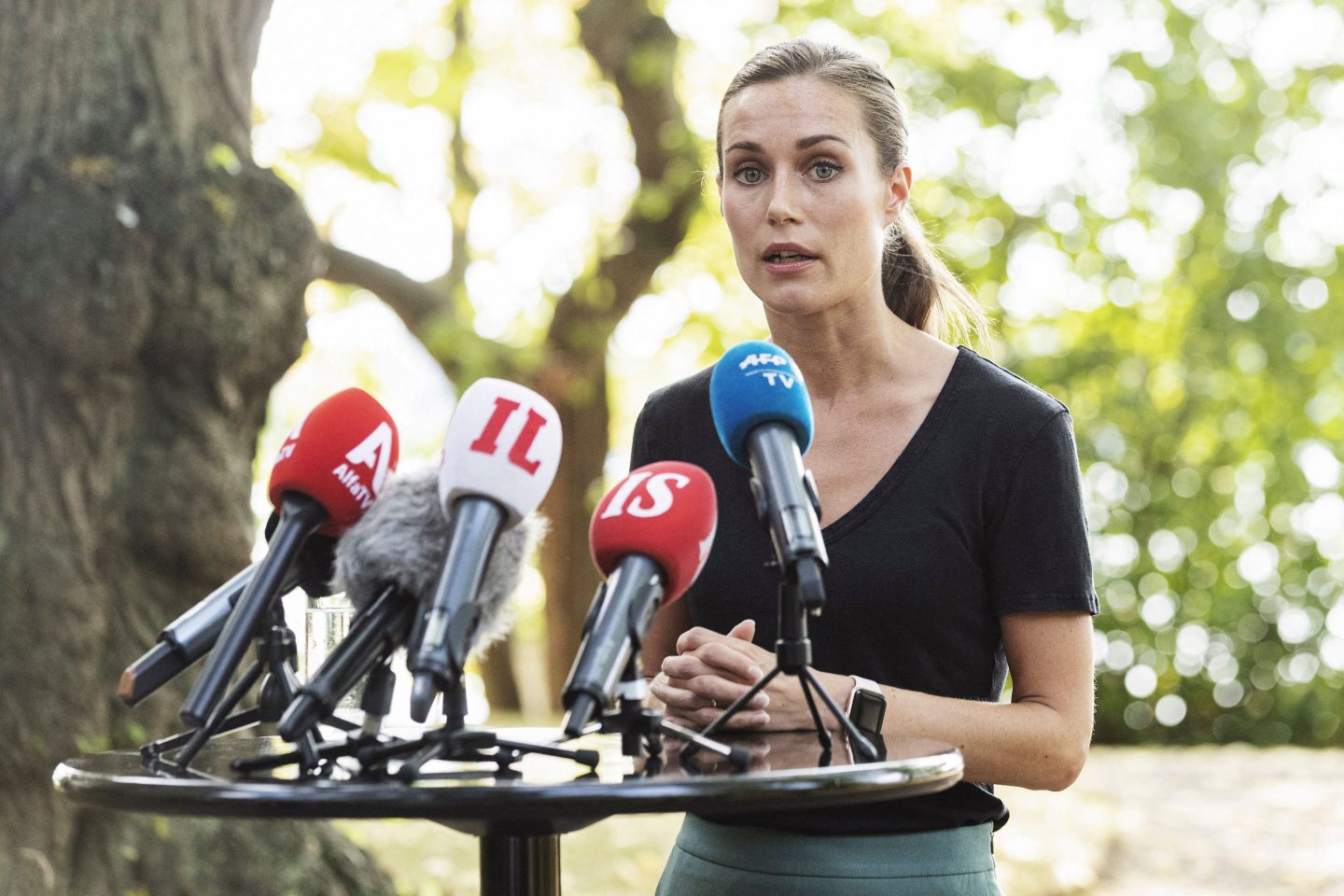 —Party politics. When Finnish Prime Minister Sanna Marin took the reins of the country’s government at age 34 in 2019, she was hailed as the youngest head of government in the world. She began leading Finland with a coalition of five female leaders, four of whom were under the age of 35.

But whereas Marin was once lauded for her achievements at such a young age, her youth has now been weaponized against her as a political liability.

A video of the now 36-year-old PM dancing with friends at a party leaked on social media and became a national controversy in Finland last week. In the video, Marin is seen lip-synching for the camera among a group of friends, dressed for a night out in a lace tank top. There are no drugs visible in the clip, but some opposition politicians, mainly from the right-wing Finns Party, raised questions about whether illegal substances could have been present. The PM, who leads the center-left Social Democratic Party, ended up voluntarily taking a drug test to push back against those claims.

This is the second time a night out of Marin’s has made international news; in late 2021, she left her work phone at home and, while she was out until 4 a.m., missed an alert to isolate after a COVID exposure. This time around, the questions that have circled her night out include whether she would have been capable of handling an emergency had one arisen and whether she was technically on summer vacation.

Marin isn’t that young; at 36, she’s married and the mother of a 4-year-old. Her behavior is relatively typical for someone in her demographic, as she has reminded those who ask her about it. “I have a family life, I have a work life, and I have free time to spend with my friends. Pretty much the same as many people my age,” she said this past week. So why the controversy around how she chooses to let off steam?

As a young woman in power, Marin looks different from leaders who’ve preceded her. In the U.S., for example, we’re used to seeing presidents take time off to play golf. Why should a weekend party with friends be viewed any differently?

Other women see a double standard in the treatment of Marin; some Finnish women began posting photos of themselves partying, too—arguing that a photo of a night out doesn’t mean they’re irresponsible or incapable of tackling important work.

Marin herself hopes that this particular controversy will lead to some changed perspectives. “I had some time off, and I spent it with my friends,” she said. “I hope that in the year 2022 it’s accepted that even decision-makers dance, sing, and go to parties.”

—In lockstep. Mary Dillon, former CEO of Ulta Beauty, has a new job. Starting Sept. 1, she’ll be CEO of Foot Locker. The athletic retailer is hoping Dillon can deliver results similar to those she achieved at Ulta, where revenue more than tripled and online sales went from 5% to about 25% of its business during her eight-year tenure. Bloomberg

—All better. First Lady Jill Biden is now testing negative for COVID-19 after her diagnosis last week. With two negative tests, the first lady was able to rejoin President Joe Biden at their beach house in Delaware. Associated Press

—Court first. Michelle O’Bonsawin was nominated by Canadian Prime Minister Justin Trudeau to serve on Canada’s Supreme Court. O’Bonsawin, who is an Abenaki member of the Odanak First Nation, would be the first Indigenous woman to serve on Canada’s highest court. The Ontario justice wrote about how her identity has influenced her legal career in an application questionnaire. Guardian

MOVERS AND SHAKERS: Longtime director Sheila Penrose is stepping down from the McDonald’s board of directors; Johnson & Johnson EVP and worldwide chairman of pharmaceuticals Jennifer Taubert and Salesforce CFO Amy Weaver are both joining the fast-food chain’s board.

—A new network. Oprah Winfrey’s OWN podcast network is reportedly looking for a new deal. Its current arrangement with SiriusXM is up at the end of the year. Its flagship podcasts, Super Soul and The Oprah Winfrey Show, largely rerelease old content, so any deal will be influenced by whether Winfrey is interested in recording new episodes. Bloomberg

—Overdue ban. Andrew Tate has grown an online following of millions as an “extreme misogynist.” In videos offering advice to men, the online influencer has said that women belong in the home and that rape victims “bear responsibility” for being attacked. Previously banned by Twitter, Tate was barred over the past few days from TikTok, Facebook, and Instagram. Guardian

—Telling her story. Supermodel Linda Evangelista last year came forward with the story that a CoolSculpting procedure left her “brutally disfigured,” ruining her self-confidence and her earning potential as a model. Now, Evangelista is sharing what followed that disclosure and how she’s navigating her reentry into the public eye. “I knew I had to make a change,” she says of sharing her experience, “and the only change was to tell my truth.” British Vogue

The unbearable heaviness of being an ‘old mom’ The Cut

‘Girlboss’ used to suggest a kind of role model. How did it become a sexist putdown? Guardian

“This will not be a traditional contest, and the stakes are high. We simply have to get it right.”

—Washington Post media columnist Margaret Sullivan, offering her advice to journalists who will cover the 2024 U.S. presidential race. Sullivan published her last column after six years in the job and four decades in journalism.