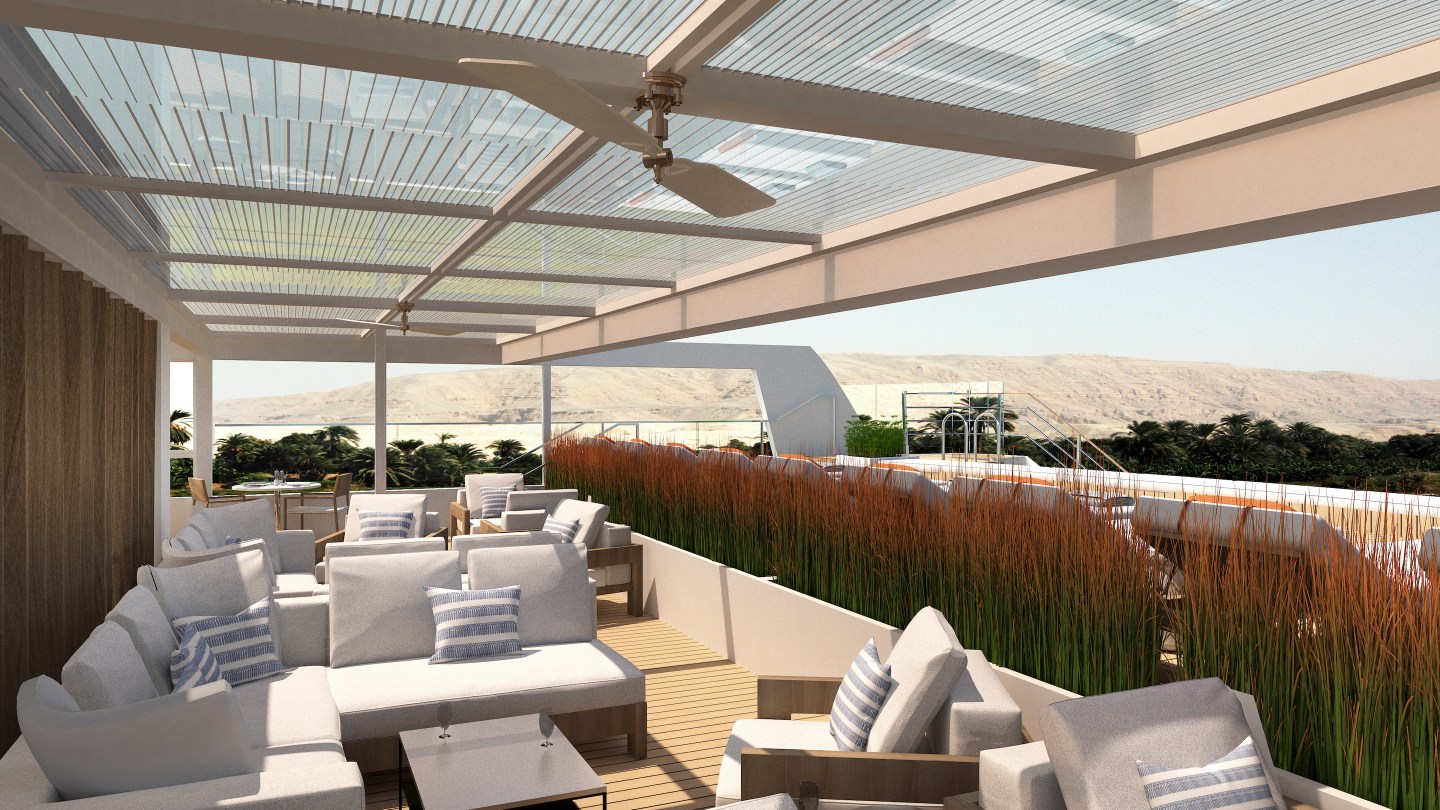 A closer look at the pool deck on the aft of the Viking Osiris.
Courtesy of Viking Cruises

The theatrical release of Death on the Nile, based on the popular Agatha Christie novel of the same name, earlier this year, perhaps ignited a resurgence in river cruise travel in the region.

Expanding its existing fleet on the Nile, Viking Cruises is preparing to launch a brand new vessel that it touts as the most upscale commercial passenger ship in Egypt. Viking now has three ships in operation on the Nile with three more planned to set sail in the coming years.

The Viking Osiris on the Nile river in Cairo, Egypt.
Courtesy of Viking Cruises

Completed this year at the Massara Yard in Cairo, the Osiris is a state-of-the-art vessel—designed in the same style as its sister ship, the Aton, and the brand’s traditional clean and elegant Scandinavian aesthetic. At 236 feet in length, the Osiris hosts just 82 guests and a 65-person crew, making it an ideal option for travelers (experienced cruisers or not) who want to travel by water but would prefer to avoid an excessively crowded ship.

“We tend to say that Viking is the thinking person’s travel company,” said Viking chairman Torstein Hagen during a media briefing about the ship’s inaugural sailing. “And I think you can’t be more inspirational to thinking people than to come here and see all this history being being delivered to you.”

Most of Viking’s 12-day itineraries both start and end in Cairo, and guests will spend the first few days in Cairo visiting some of the most iconic and historic sites on earth—notably the Giza Plateau, the Great Sphinx, and the Great Pyramids of Khufu, Khafre and Menkaure. Guests then hop on a short flight Luxor, also known as the ancient city of Thebes, where they will board the cruise, setting sail down the Nile with stops in Qena, Esna, Aswan, and Edfu. (Guests also have the option to extend their trips through Viking with four nights in Jordan to see the ancient city of Petra.)

Specifically built to navigate the Nile River, Viking says its ships have been fully reimagined to international standards of comfort and elegance.
Courtesy of Viking Cruises

The Osiris has 41 outside staterooms. Both Explorer and Veranda suites have two full-size rooms with verandas, and guests in these cabins can enjoy complimentary laundry and shoe shine services. Explorer suites also have sizable bathrooms with separate bathtub and glass-enclosed shower, as well as options for private arrival and departure transfers at the destination along with complimentary in-room breakfast service.

All staterooms and suites feature queen-size beds (with the option to book for two twin-bed configurations instead), 40-inch HDTVs with access to major news stations (i.e. CNN, BBC, CBC, etc.), multiple 110/220 volt outlets and USB ports, individual climate control (for both heating and air conditioning), bottled water refilled daily or upon request, private bathrooms with Freyja toiletries, and free Wi-Fi (although note that speeds always vary and can be spotty when sailing).

And Viking cabins, in general across its fleet, offer a considerable amount of personal storage space onboard with a spacious wardrobe, dresser drawers, and under-bed storage.

Inside one of the staterooms on the Viking Osiris.
Courtesy of Viking Cruises

The Osiris has several social spaces, including a lounge and bar with floor-to-ceiling glass doors and plenty of comfy chairs for enjoying the scenery, a full-service white tablecloth fine dining restaurant, a library, and a gift shop.

With floor-to-ceiling glass windows and large, comfortable chairs, the Lounge is a gathering place for guests to view the scenery, have a drink, take in lectures, and enjoy local music.
Courtesy of Viking Cruises

The standout spots to know are the sun deck at the very top of the ship, with sun deck on top, with 360-degree views and a shaded sitting area; and the Aquavit Terrace and Lounge, an indoor and outdoor viewing area for al fresco dining, which sits just in front of the outdoor pool deck on aft of the ship, dotted with cushioned lounge chairs for sunbathers.

The ship’s restaurant has floor-to-ceiling windows for panoramic views while dining.
Courtesy of Viking Cruises

2022, which is Viking’s 25th year in operation, has been a monumental year for the Basel, Switzerland-based business. Earlier this year, Viking debuted a quartet of new longships custom-built for France’s famed Seine river. And the company resumed plans for its expedition voyages, exploring destinations in Antarctica, the Arctic Circle, and the Great Lakes in North America. These itineraries were announced pre-pandemic in January 2020, but were soon put on hold.

“We have been through a terrible period with COVID and how that has impacted a company like us with a demand on cruising, and of course, Egypt, which is very dependent on tourism,” Hagen said. “So it’s been hell for many of us, but at least I think we now see light at the end of the tunnel.”

Viking was the first major international cruise line to pause operations during the pandemic. The company recommenced with excursions during the summer of 2021. In 2019—the last full year of pre-pandemic travel—Viking saw $3 billion in revenue, and the company is on track to outpace those figures in 2022, with an annual revenue growth forecast of 47% this year. With approximately 10,000 employees, Viking serves an average of 500,000 guests annually.

Since launching with four ships in 1997, Viking’s fleet has grown to 80 ships and counting stationed around the world.

By the end of the year, Viking plans to launch two new identical ocean ships, more new longships in Europe, and new purpose-built vessels for the Mekong and Mississippi rivers in addition to the Nile.

Viking has already sold out most of its bookings for Nile cruises for the rest of the year (and well into 2023 and even 2024), although there are still cabins available in September and October. Looking forward, Viking says it expects to carry approximately 10,000 passengers in Egypt alone next year, and 9,000 spots have already been filled.