China has always had a water problem. Diversifying supply chains might be the only way to increase supply 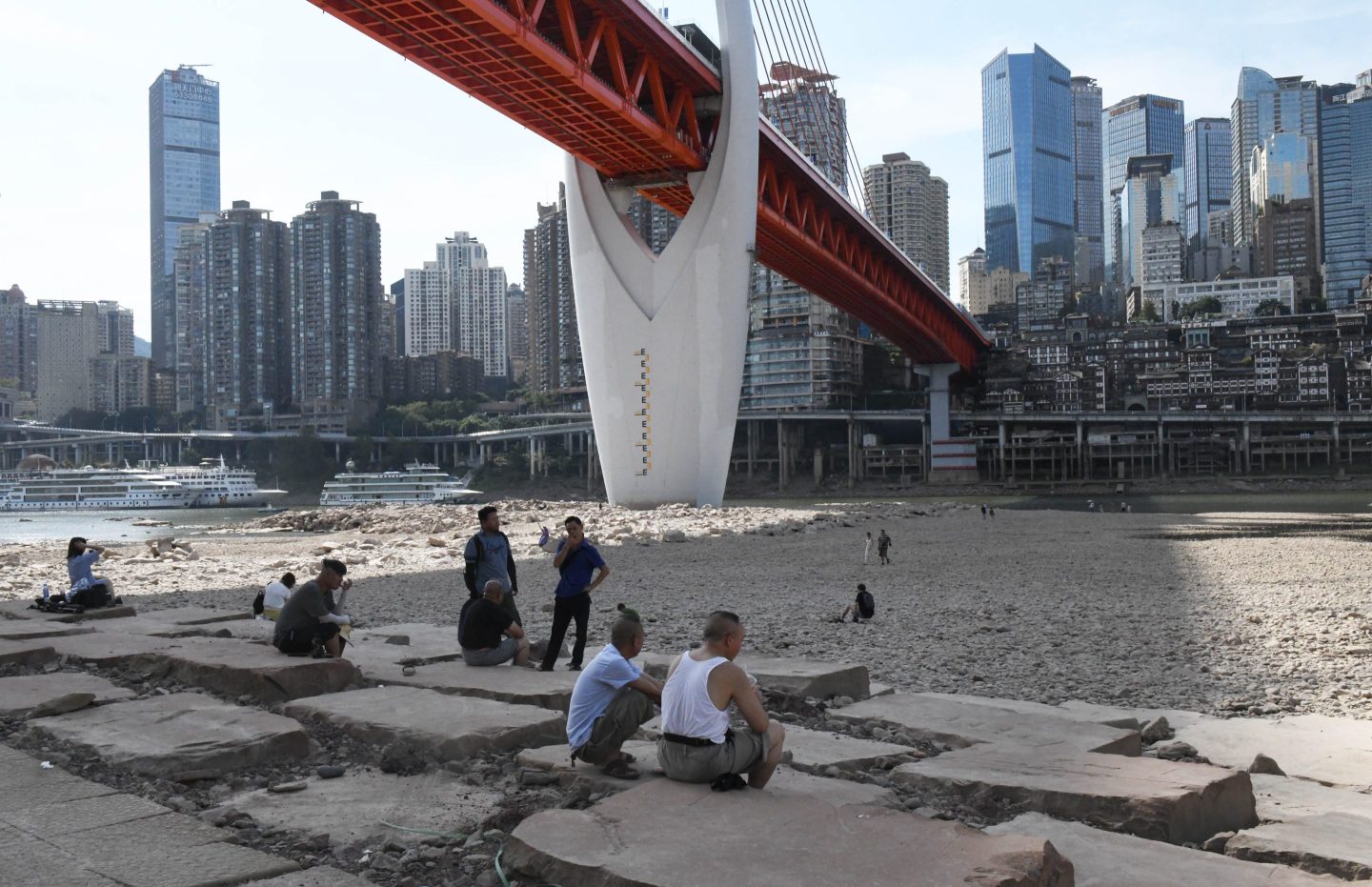 Perhaps it was the news of rivers running dry across almost every continent this week but, for whatever reason, I finally started reading Frank Herbert’s 1965 classic Dune.

The sci-fi novel catalogues revolution and regime change on a desert planet called Arrakis, where water is so scarce that inhabitants wear special suits to recycle their own bodily fluids into potable water.

Thankfully things haven’t become quite so dire as that here on Earth (yet), but the record-shattering heat waves currently bearing down on much of the northern hemisphere are forcing governments to look more closely at water conservation.

In the U.S., the federal government has ordered Nevada and Arizona to slash the volume of water each state draws from the once-mighty Colorado River by as much as 21%, as major reservoirs feeding the river have dwindled to 28% of maximum capacity. According to the New York Times, state governors missed a Tuesday deadline to reach agreement on how to meet the federal government’s decree. Next year, the states will be expected to make even steeper cuts.

A more pressing water crisis is unfolding in China, where the worst heat wave in 60 years has forced the hydropower-reliant south to ration energy by shuttering factories. The enduring heat has exposed river and lake beds across the country, prompting the central government to declare its first national drought emergency of the year.

But heat isn’t the only cause of China’s water shortages. The country also inflicts a tremendous demand on its worryingly scarce supply of water.

Just one example from an intriguing article in Foreign Policy on Tuesday (full of data but lacking citations): per capita water supply in the North China Plain—a region of provinces surrounding Beijing—is 50% below the UN’s definition of “acute water scarcity.” But the North China Plain also produces 60% of China’s wheat.

Since 2003, the government has spent over $60 billion on a massive infrastructure scheme to divert water from the country’s lush south to feed its arid north. The scheme has been successful in so far as it has wetted the north and allowed the desert to become the country’s breadbasket. But moving water hasn’t resolved the issue of total scarcity, nor prevented the south from succumbing to drought, nor helped truly replenish the north’s water stocks.

According to Foreign Policy, groundwater levels in north China continue to recede, while 16% of national groundwater has become too polluted for use.

Beijing is investing in nationwide conservation efforts. According to the Ministry of Finance, the government spent $8 billion on subsidies for water conservation efforts in 2021, up 3% from the year before. Beijing also sets an annual quota on national water usage, currently targeting 640 billion cubic meters of consumption by 2025, down from 670 billion in 2020.

In February, the Ministry of Water Resources announced plans to impose regional water usage caps and introduce a national water trading scheme (similar to a carbon emissions trading scheme) in the near future. According to China Daily, the municipal government in Beijing is currently recycling 94% of the city’s wastewater for use in irrigation too—a conservation tactic that could easily be replicated in other major cities.

(That same China Daily piece includes the interesting titbit that as recently as 1982 some residents in coastal Shandong province were rationed “two buckets” of water a day.)

But the Foreign Policy authors are unconvinced that any conservation action on Beijing’s part can make China’s water consumption sustainable. If China can’t significantly increase supply, reducing demand is the only other solution.

“Today’s global supply chains are woefully unprepared for a Chinese drought that could disrupt grain trade patterns and key industrial materials production across multiple continents,” the authors write, adding a new bullet point to the argument for “decoupling” supply chains from China. Automakers and semiconductor manufacturers got a taste of how China’s water shortages can upend their production lines just last week when Sichuan province—a major manufacturing hub for both–ordered factories to shut down to conserve electricity.

“As China continues overexploiting groundwater amid intensified weather volatility, it moves closer each year to a catastrophic water event, and forceful steps must be taken while there is still time.”

“Forceful” is a loaded term, and it’s unclear who or what would provide that force. “Prudent” or “resolute” would lean less into the anti-China that laces rhetoric on “decoupling” supply chains (to which, I prefer “diversifying.”)

But the point remains. As climate change strains the global economy, corporate leaders will have to find ways to share the load.

The hottest city in Europe

Here’s an excellent little read about how the Spanish city of Seville—which became the first in Europe to begin naming heat waves this year—is protecting itself from the sun. Warning citizens that heat is coming is no good without providing them a place to cool down and, in Seville’s science park, a project is underway to reinvent a 1,000-year-old cooling system that researchers say could lower street temperatures by 10°C. Incidentally, I’m currently in Seville and can confirm: it is hot. With temperatures consistently bumping against 40°C, just breathing warms you up from inside out. Bloomberg

Christine Frish, a non-executive board member of British energy regulator Ofgem, quit last week accusing the regulator of giving “too much benefit to companies at the expense of consumers.” Frish’s resignation comes after Ofgem announced changes this month to the way it calculates the national cap on energy prices, adjusting its metrics in a way that could add hundreds of pounds to U.K. electricity bills. Ofgem says the change was necessary to prevent more energy providers going bust under soaring energy costs. Thirty U.K. suppliers have declared bankruptcy since 2021. Financial Times

Warren Buffett’s Berkshire Hathaway won approval from the Federal Energy Regulatory Commission to increase its stake in Occidental Petroleum to 50%, up from the fund’s current 20.2% holding, which it has acquired since 2019. Occidental is the best performing stock on the S&P 500 this year, soaring 140% compared to the index’s general 11% decline. CNBC

Belgian Prime Minister Alexander De Croo told reporters Monday that the next “five to 10 winters will be difficult” in Europe, predicting tight energy markets will continue for perhaps another decade. Energy suppliers across the continent are already asking consumers to prepare for strained resources this winter, as the war in Ukraine and the demands of climate change squeeze supplies of gas and renewables. European natural gas prices have surged to 15-times the usual summer average. Bloomberg

China just ran into something that could be even more devastating for its supply chains than COVID-19 lockdowns: A record heat wave by Will Daniel

Why the Business Roundtable lost its environmental enthusiasm by Alan Murray

Hydrogen fuel cells are not as ‘dumb’ as Elon Musk says. Here’s how they could improve the EV market by Marcus Baram

Today there are roughly 8 million Americans living in areas of the U.S. at risk of exposure to heat that the National Weather Service regards as “extreme danger” levels—over 125°F (52°C). According to climate think tank First Street, that number could rise to 100 million in 2052, as unchecked climate change bakes an “extreme heat belt” across the U.S., from north Texas to Wisconsin. But the increase in exposure isn’t just because temperatures are rising; populations are also moving to the areas most likely to experience extreme heat in the future. Texas is currently home to four of five U.S. counties that record over 100 days of 100°F heat a year and has also seen the largest population growth of all states in the U.S. since 2019.