Will you live on America’s ‘extreme heat belt’ in 30 years? Chicagoans should pay attention 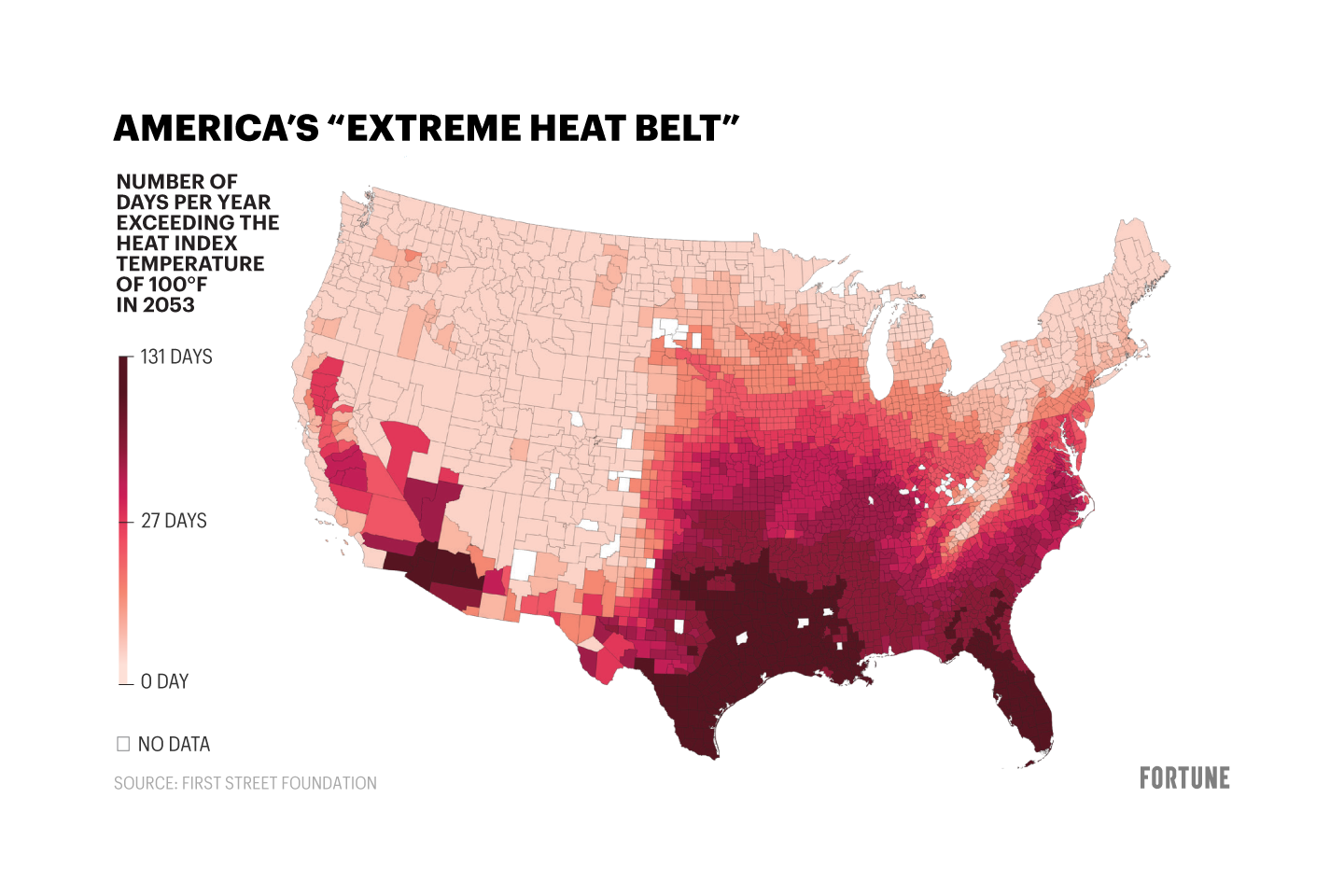 About a quarter of America’s land area may soon become unlivable.

A growing region in the U.S. currently home to more than 100 million Americans will reach temperatures as high as 125°F (52°C) over the next three decades, according to a new report from nonprofit climate risk research group First Street.

The region, known as the “extreme heat belt,” stretches from the northern Texas and Louisiana borders to Illinois, Indiana, and Wisconsin and will expand from 50 counties in 2023 to more than 1,000 by 2053.

All temperatures above 125°F regardless of humidity or climate are considered “extreme danger” by the National Weather Service, where prolonged exposure or strenuous activity increases the risk of heatstroke, cardiovascular problems, and death.

Chronic exposure to excessive heat has also been found to impair motor functions and damage organs, cells, and even DNA.

The First Street report indicated that the number of people in the U.S. exposed to 125°F temperatures is expected to grow from 8 million people in 2023 to 107 million by 2053.

“We need to be prepared for the inevitable, that a quarter of the country will soon fall inside the extreme heat belt with temperatures exceeding 125°F, and the results will be dire,” Matthew Eby, founder and CEO of First Street Foundation, said in a statement.

A lot of the states in the extreme heat belt have also seen rapid growth in their population size during the pandemic.

The report examined different regions by the number of days the heat index would exceed 100°F and found that the top 20 hottest counties, almost all of which were located in the Sunbelt region, would have more than 100 days each year by 2053.

The Sunbelt region, which stretches across the Southeast and Southwest of the U.S. from Florida to California, contains six of the 10 fastest-growing states by population, according to Census Bureau data.

Texas, which already holds four out of five of the only counties in the U.S. with more than 100 days above 100°F temperature, has seen the greatest influx of people in the past few years, with 500,000 people relocating to the state in 2019, according to the Texas Relocation Report 2021.

“Households and businesses alike continue to flock to markets throughout states like Texas, Florida, Arizona, Georgia, and the Carolinas, despite the nation’s ever-increasing climate risks and challenges.”

As extreme heat worsens in the years to come as a direct result of climate change, managing these risks is becoming an important factor in property buying.

First Street has made an online map that will tell visitors the heat risk to their property, today and up to 30 years into the future.