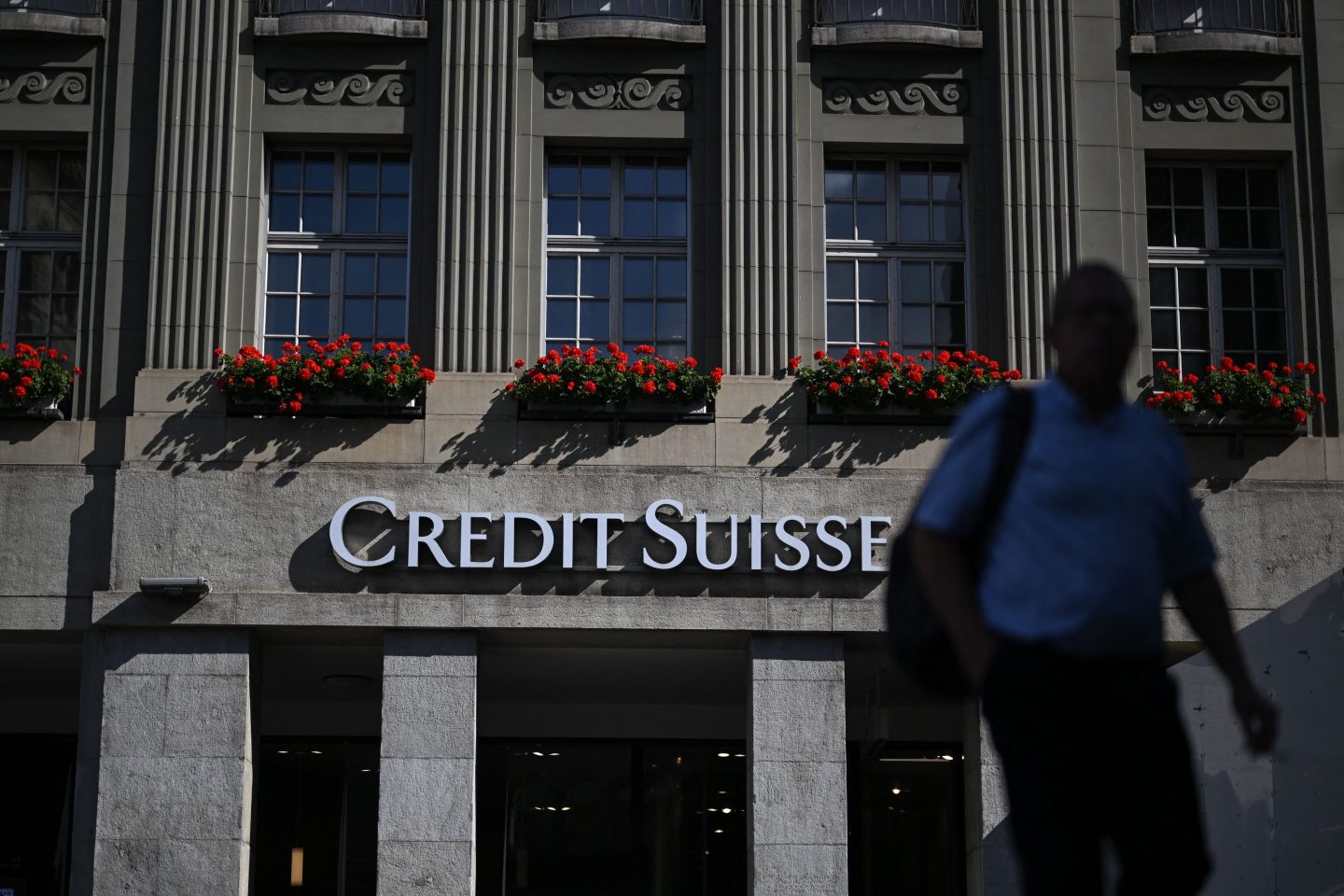 As someone who’s driven in the Beijing to Paris rally in a vintage Porsche, Ulrich Koerner knows all about staying the course. But the new boss of Credit Suisse Group AG seems to have had enough of the Swiss giant’s investment bank.

The gloves are finally off in Zurich. After years of past chief executive officers tinkering at the edges of a misfiring machine that lost $1 billion in the first six months of 2022, bankers now fear a torching of much of the division. Credit Suisse’s decades of dueling with the titans of Wall Street for a place among the bulge-bracket investment bank elite are potentially over.

Conversations with about a dozen Credit Suisse dealmakers, traders, financiers and wealth advisers, who asked to remain anonymous, depict an investment bank braced for a reckoning. As much as two-thirds of the unit could eventually be on the block in the most extreme case, senior figures say. From now on Koerner and Chairman Axel Lehmann want the firm to be an asset gatherer for the world’s rich, and a Swiss bank serving the nation’s corporate champions.

One possibility is that the investment bank ceases to exist as a separate division at some stage, other insiders say, with the remnant parts needed for asset and wealth management and the Swiss bank folded into those units. More than 30 years after the takeover of First Boston gave Credit Suisse real Wall Street clout, that would signal a historic retreat.

In the early 2010s Credit Suisse at one point ranked as a top-five global investment bank, according to Bloomberg Intelligence data, as it took on the likes of Goldman Sachs Group Inc. and JPMorgan Chase & Co. Its disastrous backing of Archegos Capital Management and Greensill Capital, two finance firms that blew up spectacularly last year, ended most ambitions to that status.

Only the M&A advisory team that traces its roots back to that First Boston deal looks relatively secure, leaving question marks over fixed-income trading, leveraged finance and debt capital markets, as well as equity capital markets. Equities-trading revenues have all but disappeared after the bank’s exit last year from prime broking, which finances hedge funds. The securitized-products unit, which trades bundled home and consumer loans, is seeking partners, aided by bankers from Centerview.

At a recent town hall meeting for Credit Suisse’s global investment bank hosted by David Miller, head of banking, management said it wanted a team that was capital light and advisory focused, according to people present.

“There comes a point where you either have a large investment bank with which you can compete against the big players, or you’re just too small and therefore it’s best to exit,” says Vincent Kaufmann of Ethos Foundation, which represents 3%-5% of Credit Suisse’s voting rights. It’s a view echoed by the biggest shareholder: “At some point they either have to fix it or look for other options,” David Herro of Harris Associates told Bloomberg TV on Friday.

A Credit Suisse spokesman says: “We’ll update on progress on our comprehensive strategy review when we announce our third-quarter earnings; any reporting on potential outcomes before then is entirely speculative.”

The hardest challenge for Koerner and Lehmann will be making exits or winding down businesses without racking up ruinous costs or seriously damaging the company through lost revenue. While activities such as securitized debt trading are volatile and eat up lots of capital, they can deliver monster profit. Finding partners or buyers for these units in current markets will be tough, too.

The Swiss duo will also need to successfully navigate any boardroom disagreements with defenders of the investment bank. Backing from their national authorities may help them, people familiar with the matter say.

“The bank really needs to gain stability and clients’ trust,” says Kaufmann. “They disclosed this new strategy but what remains to be seen is its implementation.”

It’s the second August in a row that bankers are waiting for the axe to fall as their higher-ups devise yet another strategic rescue plan. Under the previous one laid out by ex-Chairman Antonio Horta-Osorio in November, the idea was to trim the investment bank without decimating it and to cut costs while avoiding a talent exodus. It didn’t work.

The astronomical first-half loss was the last straw, one senior executive says. Thomas Gottstein, a genial but underpowered CEO with longstanding investment bank ties, is out. Koerner is in. The brusque, unsentimental asset manager is known for being willing to fire people. He was chief operating officer at UBS Group AG in a four-year period when its headcount fell by 16,000.

Lehmann, another UBS stalwart, is the second part of a new leadership double-act that will put restructuring before business building. Speaking to Bloomberg TV recently, Lehmann promised a “major redesign” of Credit Suisse. Investment bankers in Europe and the US are girding themselves for the outcome. Switzerland and Asia may fare better.

The breakneck speed at which Lehmann and Koerner are moving — details of their revamp are expected alongside third-quarter results in October — shows Credit Suisse’s dire situation. It’s still reeling from the huge Archegos and Greensill losses. Ratings company S&P has warned of “increasing risks to the stability of the bank’s franchise.”

Koerner has already done his first executive board reshuffle only weeks into the job. He’s reintroduced the job of chief operating officer and put Bank of Ireland CEO Francesca McDonagh, a turnaround specialist hired by Gottstein for a lesser role, into the post. He’s also brought in a new finance chief, Dixit Joshi, an experienced hand from Deutsche Bank AG who helped the German lender survive its own crisis. Michael Bonacker, another ex-UBS executive, has been named head of transformation, a key role in deciding where the axe falls.

Their task is considerable. The core capital ratio, a measure of financial health, is a relatively robust 13.5% but that’s been slipping as losses pile up. “They have four businesses, one of which is absorbing the profits of the other three,” says Herro.

As was the case last August, many staffers are talking of paralysis and despair, and a hemorrhaging of talent. But there’s also increasing alarm about the investment bank’s malaise holding back healthier parts of the company.

While Lehmann says Credit Suisse “still has an excellent client franchise,” other insiders say he’s been desperately trying to meet and reassure some of the bank’s billionaire customers. At least one of its top-10 clients wants to move his money elsewhere. The reputational damage, uncertainty and talent exodus are making it hard to win new work, staffers add, speaking of a barrage of client questions about the firm’s stability.

A few worried customers have shied away from long-dated products. Even in the better-performing Swiss bank, mandates with top corporations have been lost to UBS because of such stigma, a unit employee says.

Some wealth managers also resent the lavish rewards on offer to investment bankers, especially given the division’s hazy future. Even though the firm cut its 2021 bonus pool by $1 billion, in the past 19 months it’s handed out $1.3 billion in retention packages and one-time awards to stem defections. “I don’t think these big retention packages for investment bankers are money well spent,” says Kaufmann, who deems it unfair that the Swiss domestic bank’s bonus pool shrank. “Management has to be careful where the cuts apply.”

“The cost cutting has to come from bonuses and salaries and so they won’t be able to pay up any more,” says Arturo Bris, finance professor at IMD Business School in Lausanne. “That’s how a wealth manager fails as it becomes a vicious cycle: It can’t compete on hiring and keeping good talent.”

A big problem facing Lehmann and Koerner is that they’re trying to pull off their salvage job just as market conditions have turned against many of Credit Suisse’s best money-spinners, making its revenue unstable.

Previously the bank made lots of profit from Chinese companies listing in the US, such as Alibaba’s $25 billion initial public offering, but geopolitics has killed that off. Credit Suisse was also the go-to adviser for special-purpose acquisition companies (SPACs) but that craze is over too. It’s one of the biggest providers of leveraged finance to private equity firms, another industry that’s struggled recently. Russia was an important growth market for the Swiss lender, before Vladimir Putin’s bloody assault on Ukraine.

Ironically, the prime-broking unit that was shut after the Archegos debacle may have been a bright spot this year as hedge funds are doing well. “The bank has a mix of bad strategy, bad executives, and bad luck,” says Bris.

“Credit Suisse still has the same three key issues: Revenues are trending down, costs are trending up, capital is below target with capital generation at risk from low underlying profitability and incremental litigation costs,” Flora Bocahut at Jefferies wrote in a research note this month. “The outlook remains particularly dark for CS in a challenging backdrop for the industry.”

For the bank’s new top brass, the answer is to cut costs to 15.5 billion francs ($16.2 billion) in the medium term, well below Gottstein’s target of 16.5 billion-17 billion francs. And they want to shred the bits of the investment bank that gobble up capital. Herro estimates that the stock price ascribes a negative value of roughly $10 billion-$15 billion to the division. A special board committee, led by longtime Citigroup Inc. banker Michael Klein, is overseeing the cull. Unit chief Christian Meissner is helping, though he’s expected to depart once it’s done.

Rival banks offer potential blueprints. Deutsche Bank retreated from equities during its own dark days; UBS merged its equity capital markets and debt capital markets teams as it doubled down on wealth management.

Credit Suisse’s desire to keep a competitive global advisory business appears feasible given that it’s had a role on most big-ticket M&A this year, including Broadcom Inc.’s $61 billion purchase of VMware Inc. But swaths of talented dealmakers have jumped ship, and their replacements’ quality is unproven.

One senior investment banker says the division is split between people polishing CVs and others dreaming of a return to the glory days of Credit Suisse First Boston, when the deals team was in its pomp. Some wealth managers dispute the idea that their billionaire clients are a good source of work for the bank’s dealmakers, arguing that they still prefer Goldman Sachs and JPMorgan for the big stuff.

One deal that doesn’t look imminent is a Credit Suisse takeover—even if bankers are pitching it—though sales or spinoffs could be considered for any parts of the investment bank that retain value. Insiders reckon the Swiss authorities want to give Koerner and Lehmann time to deliver their national solution of a Swiss bank, plus wealth and asset management. Regulators want an orderly restructuring that doesn’t jeopardize the country’s no. 2 lender.

“For Credit Suisse, it’s like a football team,” says Bris. “It depends on the loyalty of the players. If it can depend on people doing a good job at lower pay, then it has a chance. Otherwise I’m worried.”