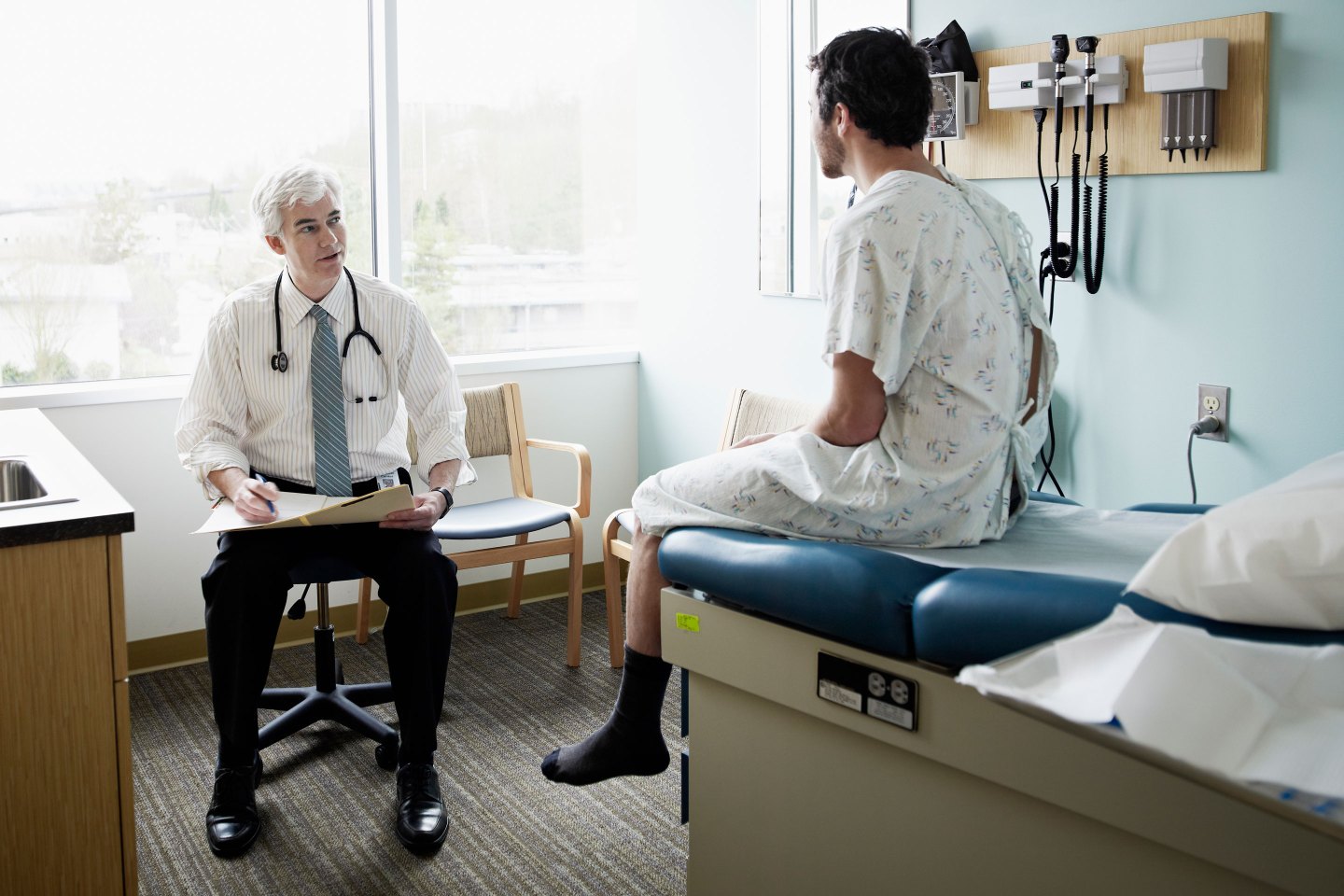 Researchers say they’ve seen COVID-related cases of sexual dysfunction in men ranging from their 20s to their 70s.
Getty Images

Two and a half years after the onset of the pandemic, we’re still calculating the damage done by SARS-CoV-2 and its worrisome scion, Long COVID. The Center for Disease Control says that nearly 20% of U.S. adults who have been infected by the virus–or one in 13 adults in our country–are still experiencing Long COVID symptoms.

Doctors and researchers have exhaustively categorized those symptoms, which range from the mundane (cough, fever, headache) to the slightly mysterious (brain fog, loss of taste or smell, a pins-and-needles sensation). But it’s a more recent body of evidence that has them looking for answers–and it may push many vaccine-hesitant men to reconsider their stance.

Are COVID-19 and impotence linked? Increasingly, that appears to be the case

“I don’t have any doubt in my mind that there is an association,” says Dr. Ranjith Ramasamy, director of male reproductive medicine and surgery for the University of Miami Health System. “Like anything else in science, association does not imply causation.”

The statistics are significant. Ramasamy and his team conducted the largest study to date on this topic, in which they compared National Registry data from over 230,000 men with a history of COVID-19 infection to an equivalent number of men who have not had the virus. Result: “We found the risk of getting diagnosed with erectile dysfunction was about 20% higher in men who had COVID versus those who did not after we balanced out for several of the comorbidities,” says Ramasamy.

Survey studies in China and Italy, among multiple others, support the notion of a link between ED and the virus. While the majority of these studies have small sample sizes, a study of nearly half a million adults published in Nature identified ejaculation difficulty and reduced libido as Long COVID symptoms in men.

A large review of 60 studies concluded that “ED could be a concerning consequence for a large segment of the male population given the high transmissibility of COVID-19,” signaling a need for long-term studies to clarify the extent of the issue.

“We know that COVID infection, especially with high fever, can significantly drop sperm counts and motility (the number of sperm moving),” says Raevti Bole, a Cleveland Clinic fellow in male fertility and andrology. “There have been multiple studies done on small numbers of patients suggesting that guys can recover their sperm quality after three to six months, but we really need to follow more patients for a longer time (to know for sure).”

While the prevalence of these issues varies, some epidemiological studies suggest potentially dramatic numbers, with tens of millions of men affected. In a small study conducted early in the pandemic, Dr. Emmanuele Jannini, a professor of endocrinology and medical sexology at the University of Rome Tor Vergata, found that those who had been infected were nearly six times as likely to report impotence as men who’d dodged the virus, once the results were corrected for other potential factors. A University of Florida Health study found these reports were three times as likely after an infection.

“Men are generally reluctant” to report sexual dysfunction, suggesting that the problem may be greater than we know,” Jannini says.

What is going on here?

First and perhaps foremost, biology is at work. Emerging data shows that COVID-19 can adversely affect endothelial cell function, which is a significant clue. These cells release substances that modulate vascular relaxation and contraction, so damage to them is likely to impair a wide range of functions, including the body’s ability to get proper blood flow to the penis when it’s most urgently needed.

For that reason, a post-COVID case of ED may be an indicator of a more general health issue, placing one at increased risk of other serious conditions like cardiovascular disease, heart attacks or strokes.

Ramasamy and his researchers have found evidence of the virus remaining within the endothelial cells of penile tissue as much as seven months after infection, which suggests that direct damage to cavernosal endothelium may affect erectile function. A non-peer-reviewed, preprint study conducted on COVID-infected monkeys by researchers at Northwestern Medicine found that multiple sites within the male genital tract, including the prostate, penis, and testicles, were infected with SARS-CoV-2.

Ramasamy described it as “probably the best evidence we have that the virus can remain within these organs and can replicate.”

“The endothelial dysfunction could make the erectile dysfunction worse,” says Dr. Amarnath Rambhatla, director of men’s health at the Henry Ford Hospital. However, Rambhatla added, “We don’t understand the whole mechanism of why (increased ED) has been happening.”

In part, that’s because men’s sexual health has always been dependent on multiple variables, any of which might exert considerable influence in its own time, including hormone levels, blood flow, or other physiological factors, a deficiency in any one of which may inhibit sexual health.

It’s important to highlight the role that mental health–and certain medicines used to treat psychological or emotional conditions–may play. Put simply, a good state of mind is closely linked with good sexual performance for men. Meanwhile, the World Health Organization has reported a 25% increase in the prevalence of anxiety and depression worldwide during the first year of the pandemic, as COVID forced people into isolation and ratcheted up both emotional and physical stress.

Even the loss of taste or smell, two common Long COVID symptoms, could factor in, since researchers say these senses can contribute to a person’s ability to become aroused.

In other words, it may be a lot of things working together, including the simple fact that getting COVID plunges you into an unhealthy state, albeit (one hopes) a temporary one. “I think that if you get COVID it can affect your health, and that directly ties to adversity with regard to your mechanism of penile erection,” says Dr. Arthur Burnett, professor of urology at Johns Hopkins Medical Institutions.

Orchitis, an inflammation of one or both testicles, has been estimated to occur in about 10 to 20% of men infected by the virus, according to a 2021 report by Nassau et al.

How long does it last?

“Men’s sexual health is definitely being affected,” says the Cleveland Clinic’s Bole. “We just don’t know how severely and for how long.”

A Chinese study of COVID-19 recovered patients showed that erection problems could last at least six months, while a prospective cohort study found significant deterioration in sperm morphology, sperm concentration, semen volume, and the number of spermatozoa in COVID-19 patients up to 60 days after infection.

A study from Italy showed that seven months after COVID infection, more than 50% of men still had low testosterone levels (which can affect erectile function.) “We don’t think this is a permanent thing,” Ramasamy says, but follow-up data is needed.

Needless to say, you want to avoid all of this, and every physician and researcher asked about it for this article said the same thing: Get vaccinated.

“People thought that the COVID vaccine and the COVID virus were pretty similar, and could lead to the same impacts…But we showed that there is pretty much no association,” said the University of Miami’s Ramasamy. He has co-authored a study that found no decrease in any semen parameters after two doses of either the Pfizer or Moderna vaccines, and several other studies have reached the same conclusion.

For all the fear-mongering about the potentially harmful effects of the COVID vaccines on male sexual health, no evidence has been found. The danger lies in contracting the virus, not in taking steps to prevent it.

At the same time, it’s not clear that getting vaccinated is a shield against COVID-based ED. “That’s the million-dollar question,” says Dr. Rambhatla from the Henry Ford Hospital. As he put it, since vaccines protect against many of COVID’s most severe symptoms, “logically it makes sense” that sexual function might also be protected. “We don’t have final data yet.”

That is a common theme when it comes to this topic. “It is important to emphasize that all of the available studies have major limitations, and we can’t make any strong conclusions at this point,” says Matthew Ziegelmann, a urologist specializing in male sexual dysfunction and infertility at the Mayo Clinic in Rochester.

It’s not at all certain that a COVID infection will lead to ED. You could suffer from many effects of the virus without sexual dysfunction being among them.

“If you already have a condition that affects the blood vessels in your penis (like diabetes or heart disease), and then you get COVID, which could cause more injury, you’re more vulnerable than someone who had healthy blood vessels to start with,” Bole said. Baseline erectile status, COVID-19 severity, and smoking have also been found to be significantly predictive of ED in healthy individuals post-COVID.

Treatments for those affected are certainly available, as anyone who watches sports on T.V. can tell you. Nationwide sales of ED medications have increased markedly during the pandemic. However, the best option is not to suffer from COVID and its complications in the first place–and that goes for younger men, too. Researchers say they’ve seen COVID-related cases of sexual dysfunction in men ranging from their 20s to their 70s.

The bottom line: Don’t try to outguess this virus, not with your sexual health–among other things–potentially on the line.

“I think we should still be cautious about trying and trying not to get the virus,” Ramasamy says. “I think the whole concept of, ‘Let me get some COVID so I will be safe for the future or not get (it) again’–those are just bad hypotheses and theories. It’s still a bad virus, and I think we still don’t know its complete ramifications.”