A 33-year-old who worked at Starbucks for 13 years got fired over a month-old violation. It led to a union walkout and a viral video that has racked up 21 million views on TikTok 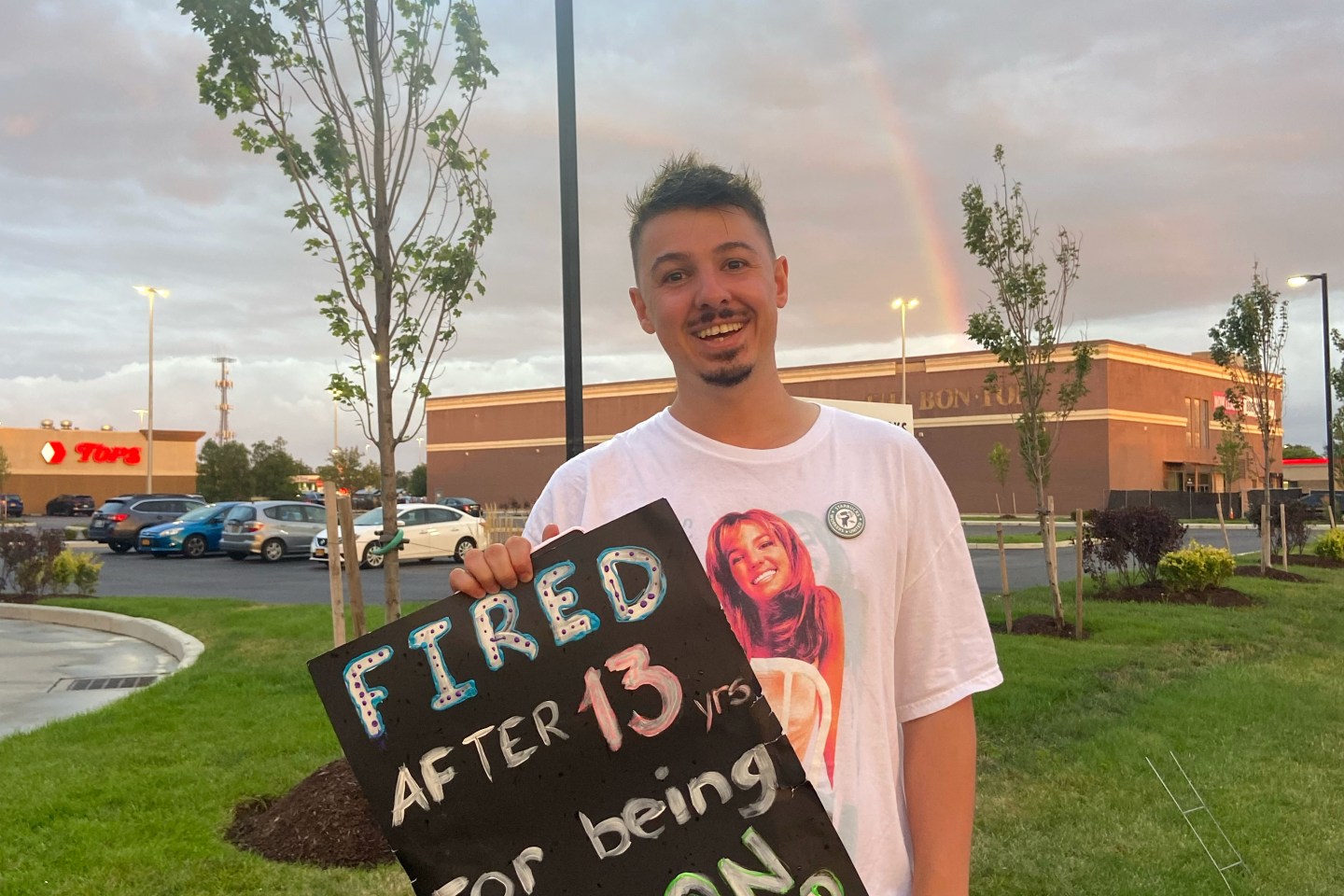 Over 13 years, he’s served countless customers, learned details of their lives, and even “watched their kids grow up,” the former shift supervisor said. When a wave of labor activity spread through Starbucks locations across the country, he got involved as a lead organizer at the store he typically works at in Amherst, a suburb of Buffalo, N.Y., which became one of the first in the country to unionize.

On Aug. 5, the 33-year-old had just clocked in for his shift at a different Starbucks in the town of Tonawanda when the store manager pulled Amato outside for a conversation and fired him for a month-old violation connected to closing the store early, a decision that he said left him “blindsided.”

But when he left the store that day, he didn’t leave alone. All six employees working in the store with him at the time walked out in a show of support. Several Starbucks Workers United union members and staff from other locations in the area joined them in what quickly became a major viral TikTok video with over 21 million views.

The caption on the video reads: “When your entire store walks out after management unjustly fires your co-worker for being a union leader.”

Starbucks denies that was the cause of Amato’s firing and said it enforces standards consistently for all employees.

The union drive at Starbucks stores nationwide grew out of a historic vote last December. Workers at a store near Buffalo voted to form the first U.S. union in the chain’s 50-year history. As 186 other locations have also unionized, the coffee giant has faced accusations of retaliating against and intimidating involved employees, which it has denied.

In June, the National Labor Relations Board filed a petition with the U.S. District Court in Buffalo accusing Starbucks of employing what the agency called an “expansive array of illegal tactics.”

Starbucks denied the allegations. “As we have said previously, we believe these claims are false and will be prepared to defend our case,” it told media outlets at the time.

The group walkout in Tonawanda that went viral last week is the most exposure that a union action at Starbucks has received so far, according to Casey Moore, the 25-year-old barista who took the video. Moore works at a different store near Buffalo, and participated in the Tonawanda walkout as an organizer. She also helps run the union’s TikTok account, and shared three videos of the walkout that have together clocked over 30 million views on TikTok.

She posted the most viral one on TikTok while traveling to South Carolina, where another store union effort is underway.

“This one completely blew up,” Moore said. “I put my phone on airplane mode, and then I opened it up, and I was like, ‘Oh my gosh!’”

The barista said she believes Starbucks’ reputation for holding liberal values is why the video caught the public’s attention.

The scene at Starbucks in Tonawanda

Amato and Starbucks Workers United believe he was fired for his union organizing.

He said he was “very active” with labor activity in July, filing an ethics complaint against the manager who later fired him, and helping to lead a one-day strike of his Starbucks store. Amato said he continued his outspokenness in discussing Starbucks’ “inadequate health insurance” in a filmed interview with More Perfect Union, a progressive media outlet, last month.

With the addition of Amato, Starbucks has so far fired nine union leaders in the Buffalo area and more than 75 pro-union workers in the U.S., according to Starbucks Workers United. The union said it has filed an unfair labor practice charge against the company on Amato’s behalf.

When asked for comment, a spokesperson for Starbucks told Fortune: “We believe these claims are false and will be prepared to defend our case.”

Amato’s termination notice, which he shared with Fortune, states the cause was that he “closed the cafe during regular business hours without informing” the district or store manager. It also notes that Starbucks issued Amato a prior warning in August 2021, though it does not specify what that warning was about. Amato said it was for a “completely unrelated” communications issue.

Starbucks told Fortune that the reason for Amato’s termination is store policy violations, specifically not following closing policies after having received a final written warning.

Amato disputes this, saying he didn’t make the decision to shutter briefly that workday. Another shift supervisor did once the “severely understaffed” team of three baristas got overwhelmed during the busy July 4 weekend, and later told management that he wasn’t responsible. A Starbucks spokesperson said store leadership holds Amato responsible for deciding to close.

Moore told Fortune closing the store has become increasingly common practice, rather than a fireable offense, as staffing shortages abound with the pandemic and the ongoing Starbucks unionization drive.

“We have been so incredibly understaffed that we’ve gotten permission from both managers and higher-up executives that say that we have discretion as shift supervisors to close down the lobby if we’re not able to run the floor,” she said.

The Starbucks spokesperson said no such exception has been made for partners, the term the company uses for its employees.

“Partners are able to shut down the lobby, but they still need to have it approved by management. A partner cannot close the lobby without prior approval for each instance,” the spokesperson said, referring to what Starbucks calls switching over to only drive-through or mobile orders. “That was not done in this situation. This partner individually decided that the lobby was going to be closed.”

Since he was fired, Amato and other workers have picketed outside the Tonawanda store several times, carrying signs and pasting posters over the doors with the message “Rehire Sam!”

The store closed earlier in the week, CBS reported. A Starbucks spokesperson told Fortune on Thursday that it is now open.

Moore said Amato’s decade-long ties with Starbucks baristas in the area is what led workers to continue their strike at the Tonawanda store.

“Sam is essentially an institution here,” she said. “There’s a lot of overlap with people picking up shifts across the district, so everybody pretty much knows Sam if you’re a Starbucks worker in the Buffalo area.”

Amato said he hasn’t had much downtime to think about what will be his next job.

“I’ve been hearing a lot from customers and former partners,” he said. “That’s what I’ll really miss—seeing all those people every day.”

“I’m so grateful for the opportunity to have been able to serve them and get to know them. Starbucks can take away my paycheck and my insurance and everything else,” Amato added. “But they can’t take away those relationships that I’ve built.”

August 12, 2022: This story was updated with additional comment from Starbucks.