What the ‘historic’ Inflation Reduction Act means for your bank account 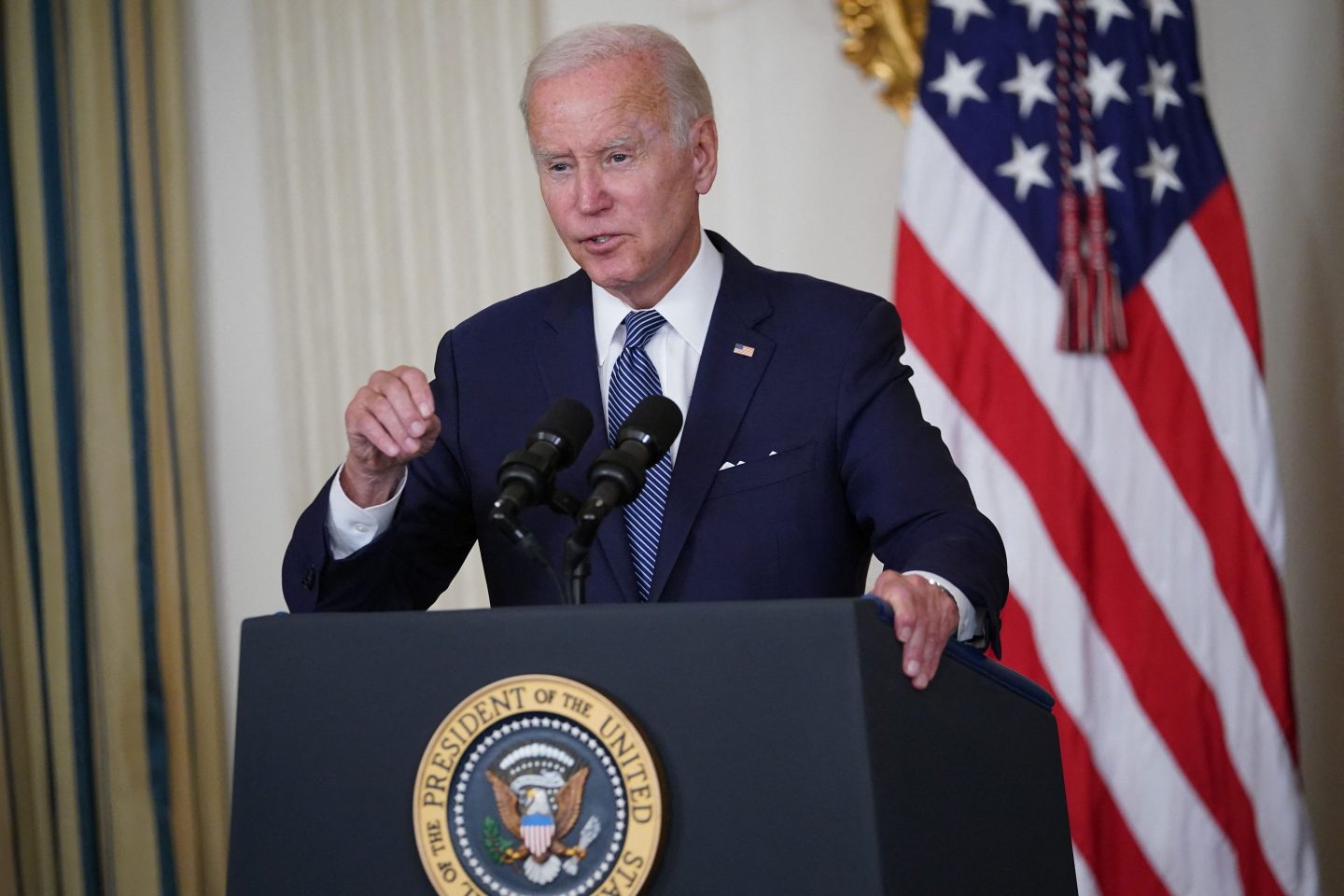 US President Joe Biden during a signing ceremony for H.R. 5376, the Inflation Reduction Act of 2022.
Mandel Ngan/Getty

President Joe Biden signed a sweeping climate, health care, and tax bill into law Tuesday that economists say could lower energy and health care costs for the average American during a time when budgets are tight.

Called the Inflation Reduction Act of 2022, or the IRA, the package puts hundreds of billions of dollars toward expanding health care access, reducing prescription drug costs, and lessening the effects of climate change. To finance that, it raises taxes on large, profitable companies and aims to better enforce tax collection efforts on the rich. Democrats say it adheres to President Joe Biden’s vow not to raise taxes on households earning less than $400,000 per year or on small businesses.

All Congressional Republicans voted against the bill, saying it would eliminate jobs and inflate prices further. Economists say the bill will likely reduce inflationary prices, although it may do so only moderately. They also say it is likely consumers won’t feel the effects right away; rather the bill makes long-term investments.

The IRA is a pared-back version of Build Back Better, Biden’s original domestic policy agenda that was put on hold by Republicans and moderate Democratic Sen. Joe Manchin of West Virginia. Although the IRA includes funding for climate change initiatives and health insurance expansion, gone are some of Biden’s stated policy priorities—including expanded childcare, universal preschool, and paid family leave—to make it more palatable to Manchin.

Here’s what you need to know about how it might affect your wallet.

The IRA allows Medicare to negotiate some prescription drug prices for seniors. Up to 10 of the highest-cost drugs will be negotiated by 2026, expanding to include 20 by 2029.

It also limits the amount the out-of-pocket drug costs for Medicare Part D patients at $2,000 per year starting in 2025 and includes the option to break up payments into monthly installments.

The bill also would have capped insulin costs at $35 per month for privately insured Americans, but Senate Republicans and the Senate parliamentarian blocked that measure. That cap now applies only to those with Medicare Part D. Additionally, the bill expands cost-sharing assistance for low-income and disabled people with Medicare.

Federal subsidies for some Affordable Care Act (ACA) health plans that are about to expire are extended through 2025 under the IRA.

The subsidies help an estimated 13 million people afford their health insurance, saving the average recipient hundreds of dollars a month.

The credit will be given at the point of sale, meaning consumers won’t have to wait until they file their taxes to receive it. It also eliminates the cap on the number of electric vehicles manufacturers can sell before the credit is no longer applicable, meaning more people will be able to qualify.

The IRA also expands the Energy Efficient Home Improvement credit, or 25C, allowing households to deduct up to 30% of the cost of qualifying green upgrades to their homes from their tax bill, maxing out at $1,200 per year for the next 10 years. One exception: Taxpayers can deduct up to $2,000 for a heat pump water heater. Currently, there is a $500 lifetime limit on that credit.

Additionally, it implements consumer home energy rebates for low-income households. That includes rebates worth up to $8,000 for qualifying households that install heat pumps that can both heat and cool homes, $1,750 for a heat pump water heater, and up to $840 for an electric stove, among others.

Those taxpayers will save not only on the installation but on their energy bills long term, writes the team at Rewiring America, an electrification nonprofit that promotes energy efficiency. And homes becoming more energy efficient will also reduce carbon emissions.

The bill also includes tax credits for manufacturers of solar panels and wind turbines and funds for building factories that manufacture clean-energy technology, among other environmentally minded provisions.

The Rhodium Group, a research organization, estimates that the bill’s provisions will save households between $730 to $1,135 a year by 2030 on energy costs.

As the name of the bill indicates, economists say the bill will help rein in inflation, although to what degree is still up for debate.

More than 120 economists sent a letter to Congress noting that because the bill is fully paid for—more on that below—it puts “downward pressure on inflation,” which has been increasing at a decades-high pace.

“This historic legislation makes crucial investments in energy, health care, and in shoring up the nation’s tax system,” the economists, which include Nobel Prize winners, write. “These investments will fight inflation and lower costs for American families while setting the stage for strong, stable, and broadly shared long-term economic growth.”

They note the IRA will also “quickly and noticeably bring down health care costs for families,” which will help their financial burdens and also ease inflation.

How it’s paid for

The IRA—which costs around $433 billion—raises an estimated $739 billion, a third of which comes from lower prescription drug costs.

It is also paid for by a 15% minimum tax on some corporations with yearly profits above $1 billion starting in 2023, as well as a 1% tax on stock buybacks and expanded IRS tax collection efforts to reduce the so-called tax gap, or how much tax is owed and how much is actually collected.

The Committee for a Responsible Federal Budget estimates that the IRA will reduce the federal deficit by $1.9 trillion over two decades.

This article was updated after President Joe Biden signed the bill into law.