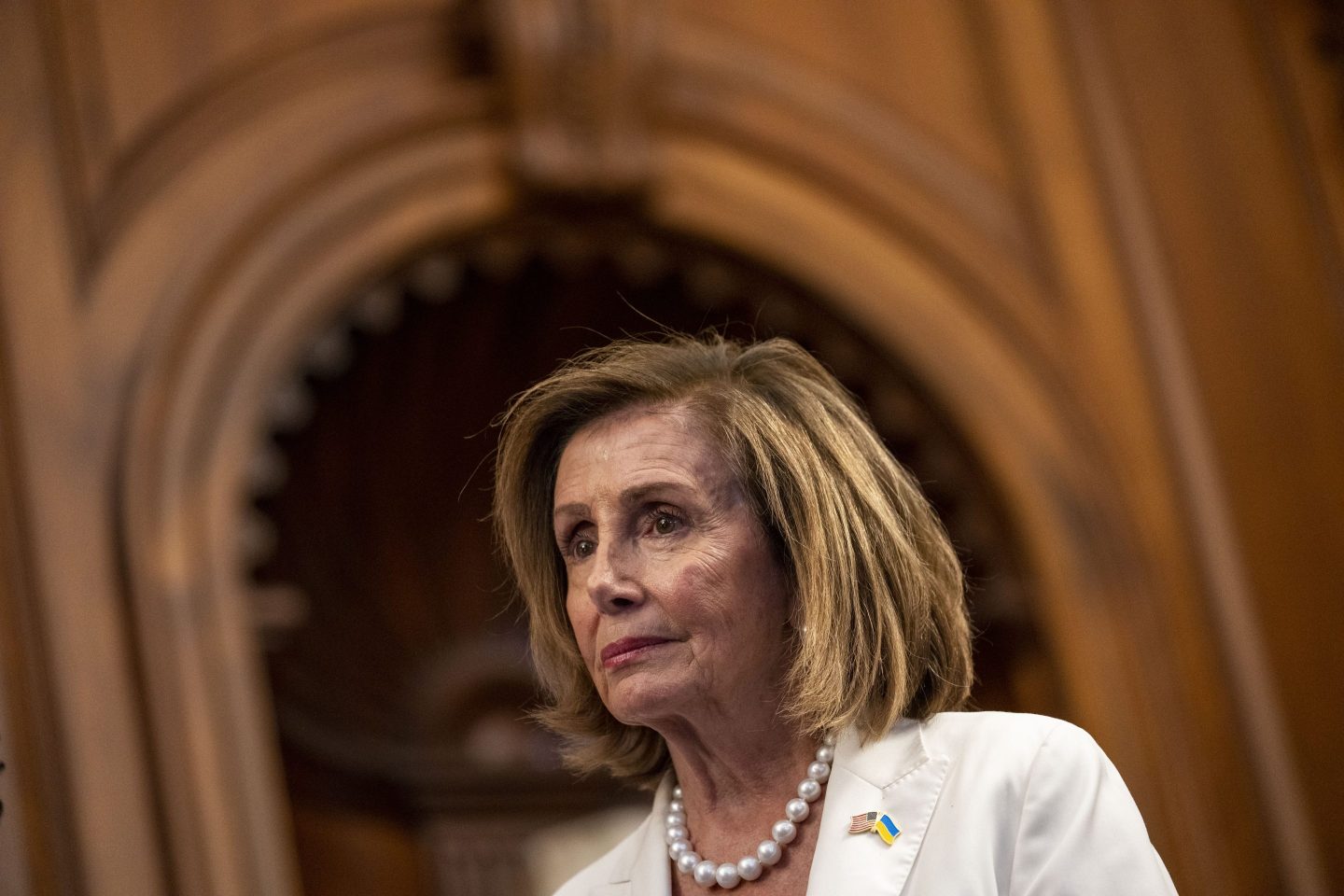 On Tuesday night, U.S. Speaker of the House Nancy Pelosi is expected to arrive in Taiwan, according to multiple outlets, which will make her the highest-ranking U.S. official to visit the island in 25 years. Beijing is furious about the visit, vowing retaliation once she makes landfall.

“We’re closely following the itinerary of Speaker Nancy Pelosi. If the U.S. continues to stand on the wrong path, we’ll take strong and resolute measures to ensure our sovereignty and security,” Hua Chunying, a spokesperson for China’s Ministry of Foreign Affairs, said at a press conference on Tuesday.

Pelosi has not commented on the trip nor confirmed reports that she will travel to Taiwan. U.S. Secretary of State Antony Blinken, meanwhile, said Pelosi—not the White House—would make the final call on whether she would visit the island.

“If the speaker does decide to visit, and China tries to create some kind of crisis or otherwise escalate tensions, that would be entirely on Beijing,” Blinken told reporters on Monday.

Cross-strait tensions appear to have escalated to the point that it has become impossible to avoid taking sides. Taiwan’s business community, led by giants like iPhone maker Foxconn and chip manufacturer TSMC, is adept at navigating U.S.-China and cross-strait relations. But Pelosi’s visit and the vehemence of Beijing’s response to it have strained the already tense triangle between Taiwan, China, and the U.S to its most precarious point in decades—threatening Taiwanese corporations’ ability to stay out of the cross fire.

On Tuesday, the stock prices of major Taiwanese firms fell amid rising tensions.

Should the conflict turn violent, Taiwan’s chip foundries, which manufacture 90% of the world’s most advanced semiconductors, would be on the front lines. Mark Liu, chairman of TSMC, told CNN this week that conflict would make TSMC’s factories in Taiwan “non-operable” and destroy the firm no matter who might win a potential war. He also emphasized that TSMC’s importance to all three sides could be a deterrent to war.

“[China] composes about 10% of our business…If they need us, it is not a bad thing,” Liu told CNN. Nobody in the business world wants to see a war happen…The war can only create problems on all three sides, we need to prepare for the worst, but we should hope for the best.”

Alfred Wu, a Chinese politics professor at the National University of Singapore, says that Taiwan’s business community is, in general, more sympathetic to Beijing than the general public. In recent years, Taiwanese citizens have grown more weary of Beijing, according to polling. In 2020, Taiwan reelected Beijing critic Tsai Ing-wen as president, just after Beijing’s crackdown on the Hong Kong protests alarmed Taiwanese citizens.

The Taiwanese public’s disaffection for Beijing has left the island’s business community as one of the last ties between Taiwan and China’s mainland. “Because they have business in China, they hope for the peaceful interaction between two sides,” Wu said.

Last year, Foxconn founder Terry Gou and TSMC’s Liu negotiated a deal for Taiwan to secure millions of doses of German maker BioNTech’s mRNA COVID-19 vaccine. Taiwan’s securing of doses of the vaccine had been delayed for months amid political infighting between Taipei and Beijing, with both governments accusing the other of blocking vaccine shipments to Taiwan.

But Wu worries that Beijing’s anger toward Pelosi’s visit may sunder the delicate connections between Taiwan’s business and political elite and mainland leaders.

Beijing usually makes “carefully calculated” moves when it comes to leveraging its power and influence in Taiwan, he argues. But the Pelosi visit has touched a nerve and led to an “angry outburst” in Beijing. Now, China’s government just wants Taipei to “feel the pain” no matter who gets caught in the cross fire, Wu says.

On Tuesday, Chinese fighter jets flew close to the line in the Taiwan Strait that divides Taiwan from mainland China, a potential harbinger of mainland brinkmanship.

China’s reprisals aren’t just military. On Tuesday, Beijing barred food imports to the mainland from 100 Taiwanese producers, including seafood, honey, and tea, according to Taiwanese media. That move follows Beijing’s ban on Taiwanese pineapples last year in an apparent attempt to undermine Tsai’s administration and her criticisms of Beijing. (Beijing had insisted the ban was a biosecurity measure and not about politics.)

For now, it is unclear how far Beijing might go in punishing Taiwan militarily or economically for Pelosi’s visit. Taiwan’s business community can only hunker down and hope for the best. “There’s probably not going to be a major change in the status quo” when it comes to Taiwan’s status in U.S.-China relations, says Samantha Hoffman, senior analyst at the Australian Strategic Policy Institute. “[But] the risk of accidental escalation is high at the moment…as China engages in these provocative activities.”